It was a dream week for Rudolf Molleker on home soil in Heilbronn. The German teen capped a fairytale run on the clay of the Heilbronner Neckarcup, claiming his maiden title in what was just his third ATP Challenger Tour appearance and first of the year.

At 17 years and six months, Molleker demonstrated maturity far beyond his age to secure his first professional trophy, rallying from a set down on three occasions during the week. Upset wins over fourth seed Yannick Hanfmann in the second round, recent Mexico City champion Juan Ignacio Londero in the semi-finals and second seed Jiri Vesely in the final gave the teen a well-deserved title.

An unseeded wild card, Molleker entered the week at No. 497 in the ATP Rankings and without a Challenger match win to his name, and the German would catapult nearly 200 spots to a career-high No. 300. Born in the Ukraine but now residing in and representing Germany, he is the youngest player from his country to win a title since a 17-year-old Alexander Zverev in Braunschweig in 2014.

In addition to becoming the first teen titlist of the year on the ATP Challenger Tour, Molleker is the third player born in the year 2000 to claim victory on the circuit. He joins surging #NextGenATP stars Felix Auger-Aliassime and Nicola Kuhn in the exclusive club.

You May Also Like: German Teen Molleker Making Most Of Opportunity In Heilbronn

Molleker spoke about his victory in Heilbronn...

Rudi, how does it feel to win your first Challenger title?
This is absolutely amazing, it's unreal. I don't really know yet what happened this week. I won my first Challenger match at the beginning of the week and now I'm standing here with the cup.

What part of your game was clicking for you this week?
This week I focused mainly on mental strength. I know I'm able to play good tennis and technically I'm good enough to keep up with the other guys, but mentally I'm not constant yet. Two weeks ago I worked with Boris Becker at a training course of the German Federation. He gave me some advice on how I could improve my mental strength. This has worked out very well for me this week.

Talk about the final. How did you beat an experienced Top 100 player like Vesely?
The guys here at the Neckarcup are all able to play good tennis, no matter if they're Top 100 or Top 200. I knew I'd have to fight to win. My coach Jan Velthuis knows Jiri very well, so I knew what I would face in the match and what tactics I'd have to use. In last year's Hamburg qualifying I already beat two players around the Top 100 (Casper Ruud & Federico Delbonis), so I knew about what to expect. This was my best win so far. I'm simply happy. 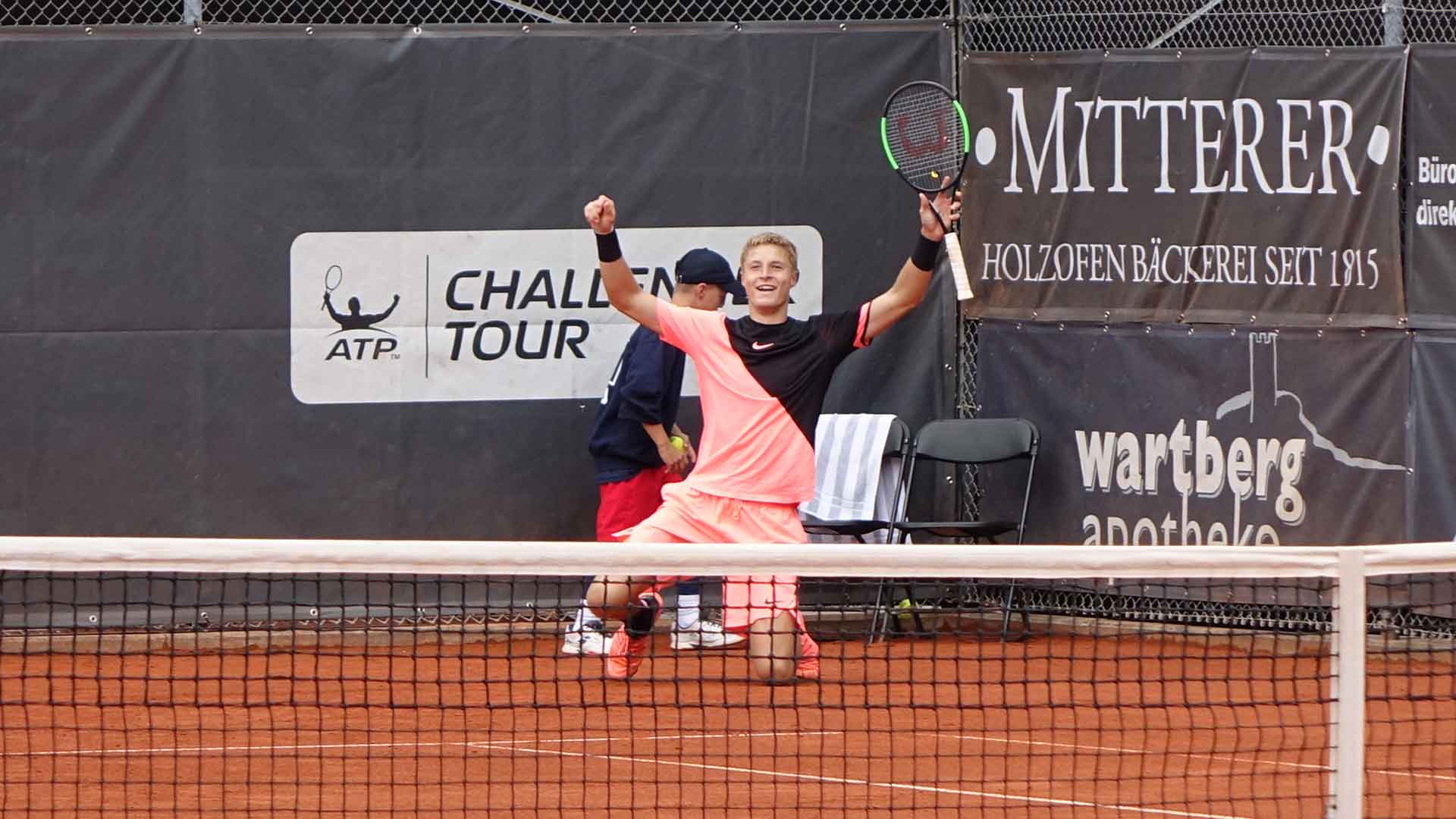 Winning at home in Germany must be special for you. How important was the crowd support?
Winning the first Challenger title in your home country and celebrating with the fans is something special. This is something not many players can enjoy. The crowd carried me to the win, in the semi-finals as well as in the finals.

You had never won a Challenger match before this week. Did you expect success to come so quickly?
I knew I could play good tennis. But did I expect the first win to come right now? No, you can't go out and just expect it. You need to work hard to make it. After one win you can say it was good luck. But now, after four wins in a row, it isn't just luck anymore. It shows me that I'm heading into the right direction. The hard work starts to pay off.

Did you feel any pressure this week, as the rising German in the draw?
I do not see that as pressure, but as possibility. Without this, I would not have received a wild card for the Neckarcup. I think I have justified the confidence placed in me by winning and I am glad for that.

You are the youngest German to win a title since Alexander Zverev in Braunschweig 2014. What are your thoughts when you hear that?
Oh, I didn't know that. But actually I don't care very much about things like that. Being 17, 18 or 19 doesn't make a difference, but of course, the earlier you're able to win, the better it is. I'm actually not very much into being compared to Sascha. He's having a great career which is something that not many players are able to have. I'm still a long road away from heading in that direction. Also, I don't want to be like him. I want to have my own career, experience my own highs and lows.

What makes Heilbronn such a great tournament? Is there something that stands out about this event?
There's a reason why it was honoured as best Challenger of 2017. I don't have too many comparisons as I haven't played many Challengers yet, but everything is perfect here. It is very well organised. Also the other players are talking very positively about the Neckarcup. What I like a lot is the opportunity to play pool, darts and table tennis with the other guys in the players' area.

What are your goals for the upcoming months? Do you plan to transition from juniors to Challengers?
Playing the Roland Garros juniors will be my next highlight. But afterwards I'll mainly play Challengers for the rest of the year. Winning the Neckarcup will help me a lot as I moved up around 200 places on the ATP Rankings. Talking about this, I'm very thankful for the wild card which allowed me to play in Heilbronn and enjoy that huge success now.