Some achievements taste even sweeter when you have to wait for them. Just ask Alex de Minaur.

The 19-year-old Aussie claimed his maiden ATP Challenger Tour title on Sunday on the lawns of Nottingham, overcoming a stern test from home hope Daniel Evans 7-6(4), 7-5. De Minaur enters the winners' circle for the first time after falling in all four of his previous finals.

The teenager is thriving on the grass this year, posting a 9-1 record with a runner-up finish in Surbiton and victory in Nottingham. And De Minaur was not discouraged after succumbing to Jeremy Chardy a week ago in the Surbiton championship, proceeding to drop just one set en route to the title at the Nature Valley Open in Nottingham.

With his sights now set on even more Challenger silverware, the Aussie could draw inspiration from fellow #NextGenATP star Frances Tiafoe, who dropped his first five final appearances on the ATP Challenger Tour before reeling off four consecutive wins.

Now firmly in the Top 100 of the ATP Rankings at a career-high No. 78, De Minaur is also in the hunt to qualify for the Next Gen ATP Finals in November. He is up one spot to fifth place following his triumph on Sunday.

De Minaur spoke to ATPWorldTour.com following his victory in Nottingham...

Alex, congrats on winning the title. How does it feel to get your first Challenger trophy?
It feels great. It's something that's been a long time brewing. I've made a few finals that haven't gone my way, but I'm happy that I've finally done it.

The crowd was in Dan's corner, but you stayed mentally strong. How did you outlast him today?
I knew that it was going to be the case coming in, but I was just trying to be mentally stable and focus on the positives throughout the whole match. I think that's what really got me the win today.

It was another impressive week for you. What went right for you on the court?
I've been playing some great tennis and feeling confident on the court. The body is feeling great and I'm moving well. In the end, what made the difference is being mentally tough. I had that when I needed it and that's all I can ask for in myself.

What lessons did you take from your four previous final losses that helped you today?
I just try to see the positives throughout the whole match. It's a goal of mine before the match started. Obviously there were stages when I started to get a bit nervous, but I calmed myself down and stayed relaxed and took it point by point. 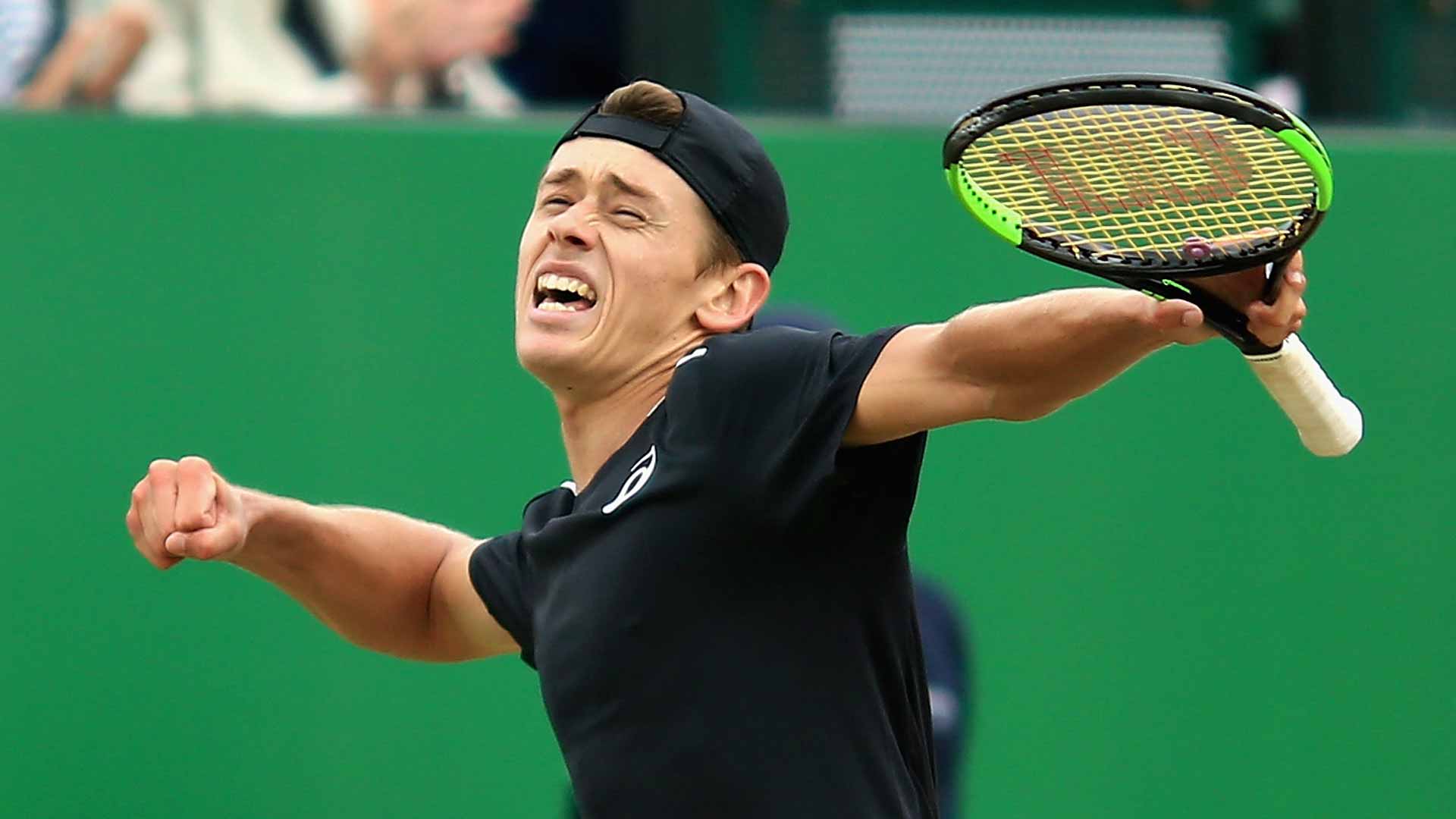 You go from cracking the Top 100 last week to now lifting your first trophy. Does June feel like a dream month?
It feels amazing. And there's no surface I'd rather do it on. I love the grass and I love this time of year. I couldn't be prouder of myself.

You've reached back-to-back finals on grass. What is it about the surface that complements your game?
I've always loved it, even before I ever hit on the surface. I made my mind up that I was going to love the grass. Something about the low bouncing that suits my game. I like to stay flat on the ball and I really enjoy it.

It's been a great year for you so far. Talk about your experiences competing on the ATP Challenger Tour.
It's something that you go through, to make it to the top. You have to be mentally tough. Each match the other guy wants to beat you. There are no easy matches. You have to be focused throughout and can't let any dip in concentration. I think my attitude and the way I've handled those situations over these two weeks have been great.

Where do you go from here? What's next?
I have a week off, which is very important for my body to recover.

What are your goals for the rest of the year going forward?
At the start of the year, my goal was to finish the year in the Top 100. I've managed to do that, so I now hope to get into the Top 50. I'm going to try to get as high as I can. But at the end of the day, it's all about personal growth and trying to get better each day.