Michael Mmoh is the champion in Knoxville, claiming his first title of 2019.

ATP Staff
This article contains:
American sits down with broadcaster Mike Cation after taking the title in Knoxville

Victory never tasted so sweet for Michael Mmoh. The 21-year-old notched his first title in his comeback from a shoulder injury, defeating an in-form Christopher O'Connell 6-4, 6-4 on Sunday to cap a strong week at the Knoxville Challenger.

Mmoh was sidelined for four months earlier this year, before returning to the court at Roland Garros in May. It was a challenging comeback for the Florida resident, but he is beginning to find his form once again as the season winds to a close.

Mmoh, who ascended to a career-high No. 96 a year ago, has been fighting to rebuild his ATP Ranking and rediscover his top form in the second half of 2019. He rises 56 spots to No. 238 with the victory.

It has all come full circle for the American, who won his first Challenger title in Knoxville three years ago. At the time, Mmoh was first embarking on his professional journey. Now, fully healthy, he is targeting a speedy return to the Top 100 in 2020.

The 🇺🇸 earns his first title in his comeback from a shoulder injury, dropping just one set in six matches to lift the 🏆. pic.twitter.com/IpItHKQ8G5

Arguably the most important aspect of Mmoh's week in Knoxville is the maturation he experienced. One week ago, the American was defaulted in Charlottesville after throwing his racquet and inadvertently hitting a linesman. You learn a lot about a person's character following such a moment, and a devastated and emotional Mmoh responded with great strength and maturity. It was an uncharacteristic moment for one of the more kind and charismatic players on tour, but one that he admits has provided the biggest learning experience of his life.

Mmoh spoke to broadcaster Mike Cation after lifting the trophy...

Congrats, Mike. I keep thinking that you closed out the match on a serve-and-volley. When you won here in 2016, it was as a defensive player. But your attacking today was remarkable. What made you want to close it out that way?
If you told me a couple years ago that I'd serve and volley on set point in the first set and again to do it to win the match, I would have said 'no chance'. I even shocked myself. I was even talking to my coach Patrick [Frandji] about it and I think all the doubles I played has helped a lot.

Last year I might have played two doubles events, but now I've played four in the past couple weeks. Just to get those reps and work on my transition game. I'm getting pumped about that. This was probably my best volleying performance ever. I knew he was going to slice every return and if I came in, I'd get a volley I liked. I just had to go for it and trust myself.

That's hard to do, especially when you're at the ranking you are. A match like that means so much. How do you trust yourself like that in matches?
I don't know. It's all instincts, honestly. I was just as nervous as anyone watching. Especially those couple deuce games when I'm down break point. It was serve and volley reactions. I wasn't thinking when I was doing it. It just happened. My intent going into this match was to be aggressive and impose my will. I found out that he wasn't passing as well, and I won a lot of points when I came to the net. I just knew the percentages were on my side.

What have you been doing in the training sessions with Patrick the past couple weeks?
Everything, from A to Z. Every single drill in the book. I've been telling him and he's been telling me to spend at least a half hour at the net. Every day. Whether I miss a thousand volleys, it might not pay off immediately, but just getting those reps and working that side of my game, I think it's so beneficial to my game.

In terms of where you are now, you're pretty much locked into Australian Open qualies worst-case scenario. You also have the lead in the USTA's wild card challenge. Did you think you would get to this point?
Coming into these few weeks, I definitely thought it was a goal. I was playing well and didn't get the results I wanted. I played Steve Johnson early in Fairfield. I played Vasek Pospisil in Las Vegas. All the players I was losing to were good players. In practice, my game was there. If I got on a roll, maybe it could happen. After last week, I had no intention of winning the wild card. I just want to be playing and if I win a couple rounds here it's great. I won my first round and played great. Darian King is always a tough competitor and then my draw opened up a little bit. I believed in myself and took full advantage. 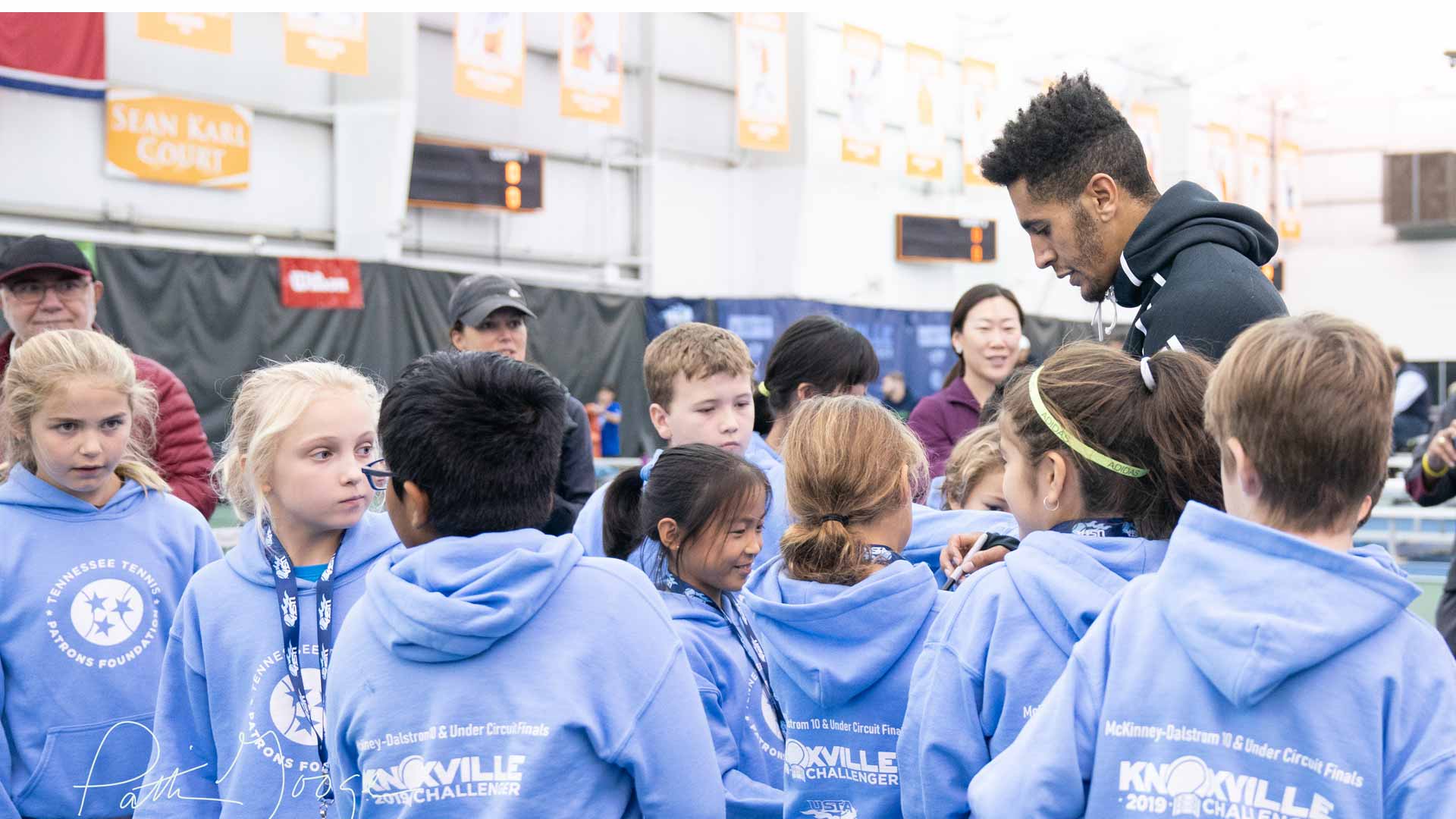 You brought up what happened in Charlottesville. It was very emotional for me, knowing you. And knowing that it's just not like you. I can't even imagine what it was like. What were those conversations like with your mom in terms of mentally being ready to be here this week?
Right after the match I went to the little cafe area in Charlottesville. I was sitting down with my mom. I'll remember this for the rest of my life. I was just balling my eyes out. I was so disappointed in myself and embarrassed. I didn't know how I would make it past that. I didn't know how I could even play tennis again, which is so sad. It was a low moment. I took it one moment at a time and one day at a time. My mom definitely gave me a lot of power and a lot of courage.

Getting some practices and matches in was important. Coming into my first round match I was still thinking about it. But it gave me a different perspective. Coming into that day in Charlottesville, I thought the worst thing that could happen was me losing that tennis match. But I would have lost 6-0, 6-0 without doing what I did. I felt so bad in that moment.

To overcome that, I've been happy winning tennis matches before, but I've never been this proud. I can't apologize to whoever saw that moment and to that linesman enough. It was a mistake that I will always regret for the rest of my life. From the bottom of my soul, I feel so bad.

It's ironic because it was Darian King opposite you and he had his unfortunate moment a few years ago in Charlottesville. Did you talk to him at all, because it took him a while to recover?
I actually haven't spoken to Darian himself, but I've had conversations with his brother. His brother talked to me about what Darian went through and his emotions for the next couple of weeks. He really helped me.

A lot of players were actually super nice about the whole situation. They told me stories of similar things they went through. They said to learn from it. Paolo Lorenzi told me about a story from 10 years ago, where he threw a racquet and it almost hit a ball kid. From that day, he said he will never throw a racquet for the rest of his life. I said that I will make that same initiative.

You have one tournament left this year. It's in Houston and it's outside and cold. Where are you at mentally going there?
Well, I've only played half the year. I've played 30 matches this year and everyone else has played more than 70. I feel relatively fresh. The cold is an aspect that will be a challenge, but I'm ready for it. Nothing is a bigger battle than this week, so forget about 30-degree weather. I'm ready for it.