A LOOK BACK
Challenger Banque Nationale de Gatineau (Gatineau, Canada): We've heard this story all too often... Jason Kubler kicked his comeback into high gear, lifting a trophy in his return from injury. On Sunday, the Aussie tasted success on the hard courts of Gatineau, seizing his first title of the year.

Kubler, who missed three months with a knee ailment earlier in the year, is hoping to stay healthy and gather momentum in the second half of 2019. This was the perfect start. One week after finishing runner-up in Winnetka, he did not drop a set en route to the title in Gatineau. The 26-year-old defeated Enzo Couacaud 6-4, 6-4 to capture the crown.

"It's very humid and bouncy here, which I like," said Kubler. "Similar to Brisbane, where I'm from. I love the people here too, so it's a home away from home in Canada. But to be honest, I got lucky not having to play three-set matches this week. Everyone else was having long matches and I was lucky enough to get through without a grinding match. It takes a lot out of you."

For Kubler, it has been a battle to stay healthy over the years. His story is well-documented, having been forced to play exclusively on clay earlier in his career due to a hereditary knee condition. Then, a shoulder injury proved another setback in 2017. But the Aussie has shown incredible resilience and fortitude and he would proceed to climb 841 spots in 2018, breaking into the Top 100 of the ATP Rankings. He's hoping this latest obstacle is just a minor setback.

"I just have to keep grinding and fighting. I'm going to enjoy this win and head to Granby tomorrow morning. We'll see how it goes."

Kubler's victory in Gatineau was his fifth Challenger title and first since he triumphed in Winnipeg exactly one year ago. Canada has become a second home for the Brisbane native, who also reached the final in Vancouver last August. Now, he is plotting his Top 100 return, vaulting 22 spots to No. 189.

San Benedetto Tennis Cup (San Benedetto, Italy): One year ago, Renzo Olivo strongly considered hanging up his racquet. Coming off an impressive 2017 campaign, which included an upset of Jo-Wilfried Tsonga at Roland Garros and a Top 100 breakthrough, the Argentine was soaring. But, 2018 proved to be a trying year for Olivo and he would fall outside the Top 500 of the ATP Rankings.

"I was close to stopping, but mentally I came out of it," said Olivo. "And I'm ready to start again."

Now, the 27-year-old is back on track after clinching his third ATP Challenger Tour title, triumphing in the Italian coastal city of San Benedetto. He defeated Alessandro Giannessi 5-7, 7-6(4), 6-4 in a marathon two-hour and 54-minute final.

Back inside the Top 300, Olivo earned a 71-spot boost thanks to his victory on Sunday. The former World No. 78 will hope to carry the momentum to the Challenger in Tampere, Finland, opening against Ivan Gakhov on Tuesday. 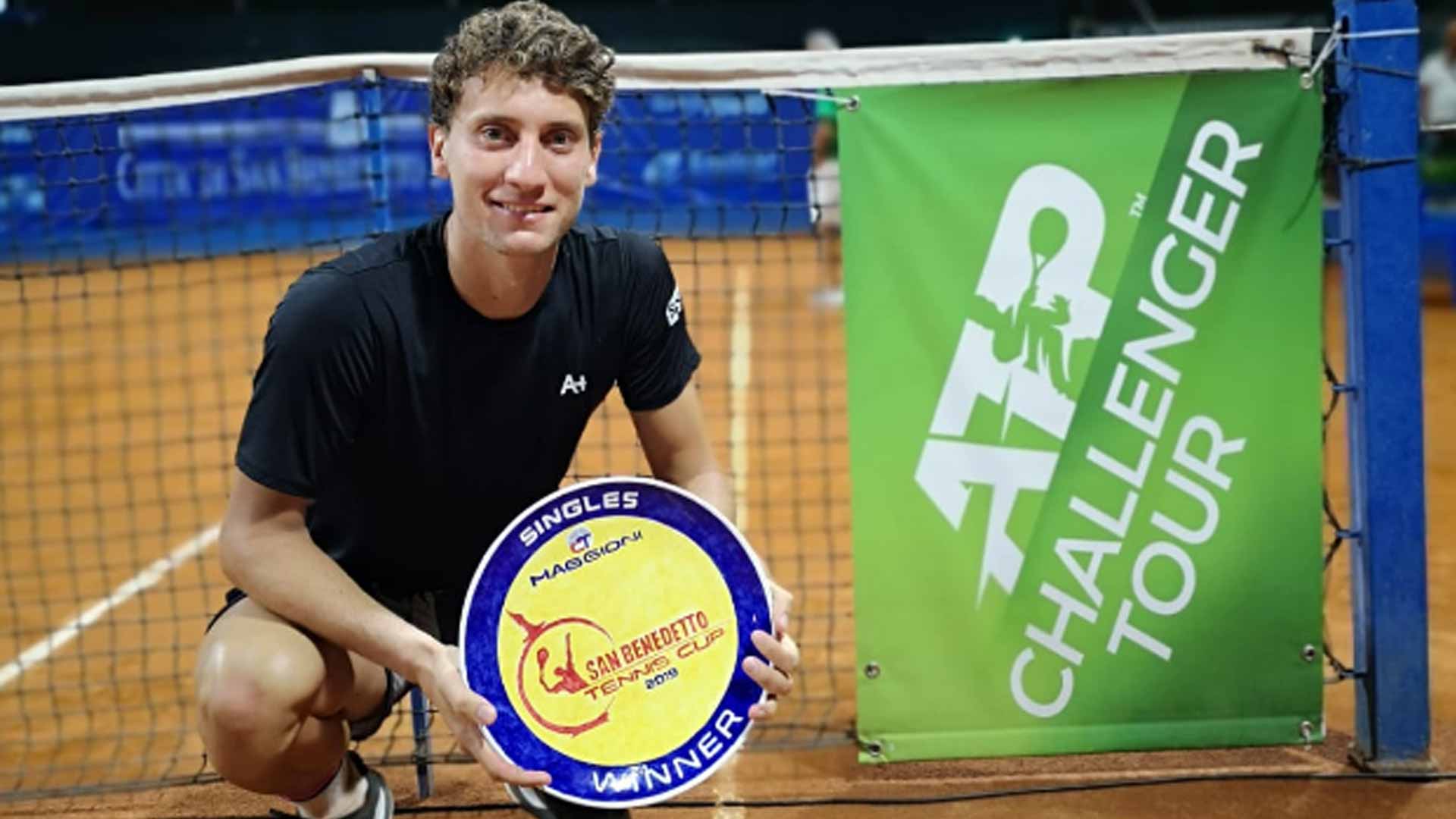 Located on the Adriatic Sea, the tournament in San Benedetto is just steps from the beach and is the perfect mid-season retreat for players. Fans packed the stands all week, providing a festive atmosphere for tennis under the lights.

President's Cup (Nur-Sultan, Kazakhstan): Evgeny Donskoy has played his best tennis over the years in Kazakhstan. This week, it was more of the same from the Russian. Donskoy battled to his third title in Nur-Sultan, defeating Sebastian Korda 7-6(5), 3-6, 6-4 on a scorching Sunday afternoon in the Kazakh capital.

Donskoy previously lifted the trophy in Astana in 2012 and 2016. Earlier this year, the city was renamed Nur-Sultan after former president Nursultan Nazarbayev.

For the 29-year-old Russian, it was his 12th Challenger title in total and first in two years. He is projected to rise to No. 115 in the ATP Rankings on Monday.

Meanwhile, the week was also a special one for Korda, who became the sixth teenager to reach a Challenger final in 2019. The 19-year-old advanced to his first title match on the circuit, securing impressive wins over three seeded players. The Australian Open junior champion a year ago, Korda rises 75 spots to a career-high No. 307. 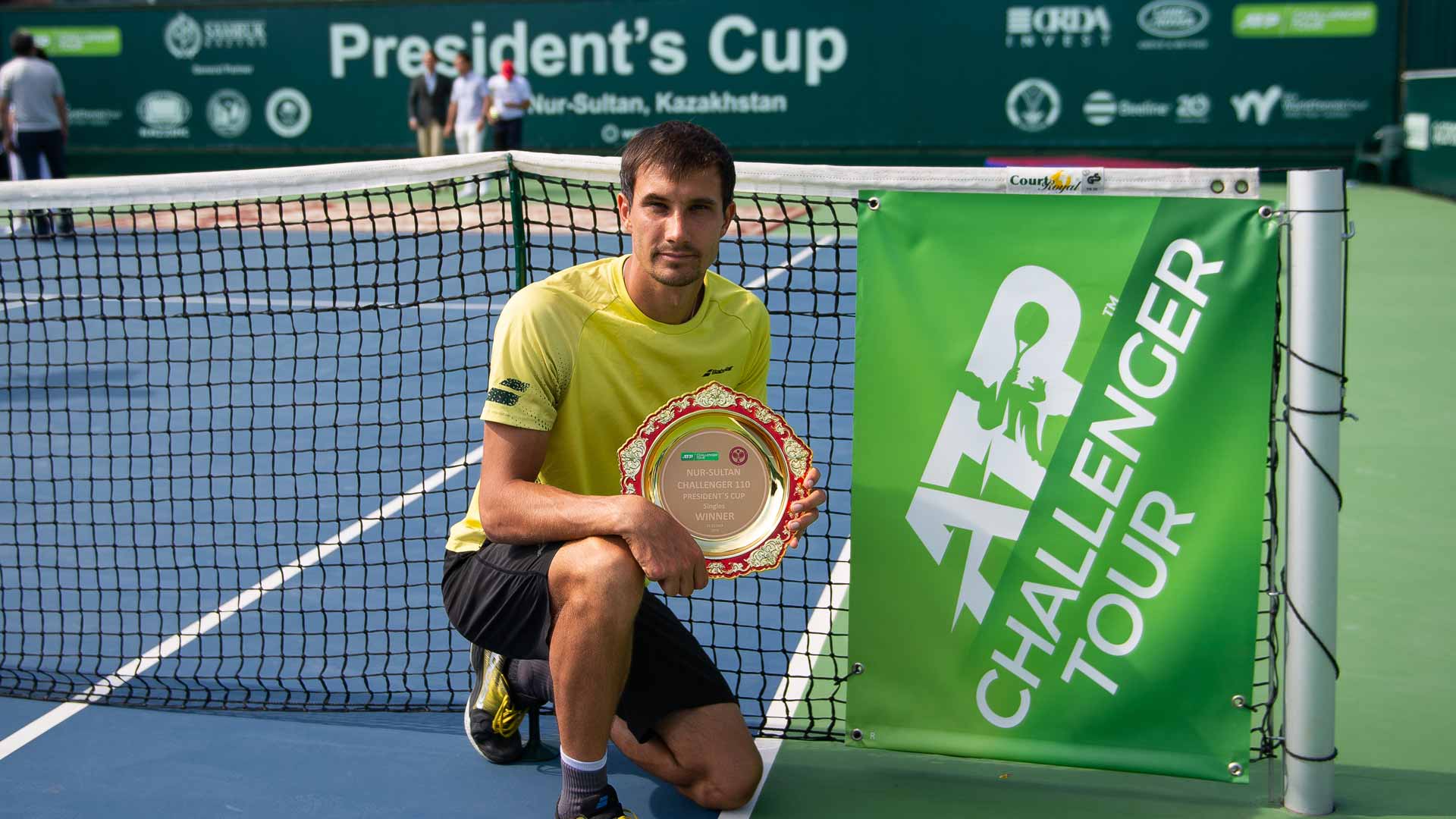 Moraing converted five of nine break chances to lift the trophy, returning to the winners' circle in efficent fashion. It was his first victory on tour since claiming his maiden title in Koblenz, Germany, last year.

Welcome to the @mats_moraing 💪💪 show.

A LOOK AHEAD
The three-week Canadian swing comes to a close in Granby, with top seed Norbert Gombos seeking a second title in three weeks and second seed Peter Polansky looking to retain his crown. Fourth seed Vasek Pospisil won the title in 2012.

Meanwhile, in Prague, Moraing eyes a second straight title, while Attila Balazs hopes to extend his strong form. The Hungarian is coming off a first ATP Tour appearance in Umag, as a qualifier.

And in Tampere, Finland, the longest-running tournament on the ATP Challenger Tour enters its 38th edition. Pedro Sousa is the top seed, with the Ymer brothers - Mikael and Elias - seeded second and third, respectively.