New York Open champ Reilly Opelka is making a seamless transition from the ATP Challenger Tour to the ATP Tour in 2019.

A Year In The Making: Inside Opelka's Amazing Ascent

Josh Meiseles
This article contains:
After posting one of the best Challenger campaigns in 2018, Reilly Opelka is an ATP Tour champion, soaring nearly 200 spots in the ATP Rankings

It was all about Big O in the Big Apple. Last week, Reilly Opelka was the talk of the ATP Tour, making a massive statement as big as his 6'11" frame in claiming his maiden title at the New York Open.

Opelka turned in an overwhelming serving display, hammering 156 aces while earning four deciding-set victories to lift the trophy. He saved six match points to stun top seed John Isner in the semis, before edging Brayden Schnur in a third-set tie-break on Sunday.

It was the crowning achievement for the 21-year-old, who made significant strides over the past year to arrive at this moment. To say that a player 'put in the hard work' can often sound clichéd, but in this case it couldn't be closer to the truth. Armed with a well-rounded game and transformed approach, Opelka has put in the hard yards.

Winning breeds winning, regardless of the level, and Opelka has adopted that mentality. He points to his 2018 Challenger campaign as the impetus for his strong tour-level results in 2019. The American is proving that while his game is predicated on a mammoth serve, his agility, court awareness and touch around the net are his keys to victory, especially in pressure moments. As he continued to win matches, those skills matured at a rapid rate.

The oft-injured American has battled foot and leg ailments in recent years, which has hampered his progress since breaking onto the scene as a teenager. But, finally healthy and under the tutelage of Jean-Yves Aubone, Opelka emerged as one of the biggest stars on the ATP Challenger Tour in 2018. It was a breakthrough campaign for the Michigan native, and despite battling a debilitating case of mononucleosis during the summer months, he turned in a staggering surge up the ATP Rankings.

"Last year was huge for me," Opelka reflected. "It was the first time I consistently put together a lot of matches in a row. I reached a lot of semi-finals and I think the year before there wasn't one week where I had won three matches in a row. Being able to play on the Challenger Tour and not as many ATP Tour events, helped me string all those matches together. It gave me a lot of confidence and I learned a lot about myself and my tennis. It allowed me to work on some things that I knew needed to be addressed."

Entering the 2018 season, Opelka had won a combined 17 matches at the Challenger level in his young career. He doubled that total in the span of 11 months, finishing with an impressive 34-11 win-loss mark, including three titles. In fact, his .756 win percentage came in second place, behind only Vasek Pospisil (.784). Another player on that list, Juan Ignacio Londero, also won his maiden ATP Tour title in recent weeks, prevailing in Cordoba.

You May Also Like: From Challenger Star To ATP Tour Champion

Opelka demonstrated his vast shotmaking arsenal and all-court game with his first clay-court crown at the prestigious BNP Paribas Primrose in Bordeaux, France, in mid-May. And despite sitting out a three-month stretch following the mono diagnosis, he would dominate upon returning to the Challenger circuit. A 17-4 run would follow, including back-to-back indoor crowns in Knoxville and Champaign to conclude the year and vault him to the Top 100 of the ATP Rankings. 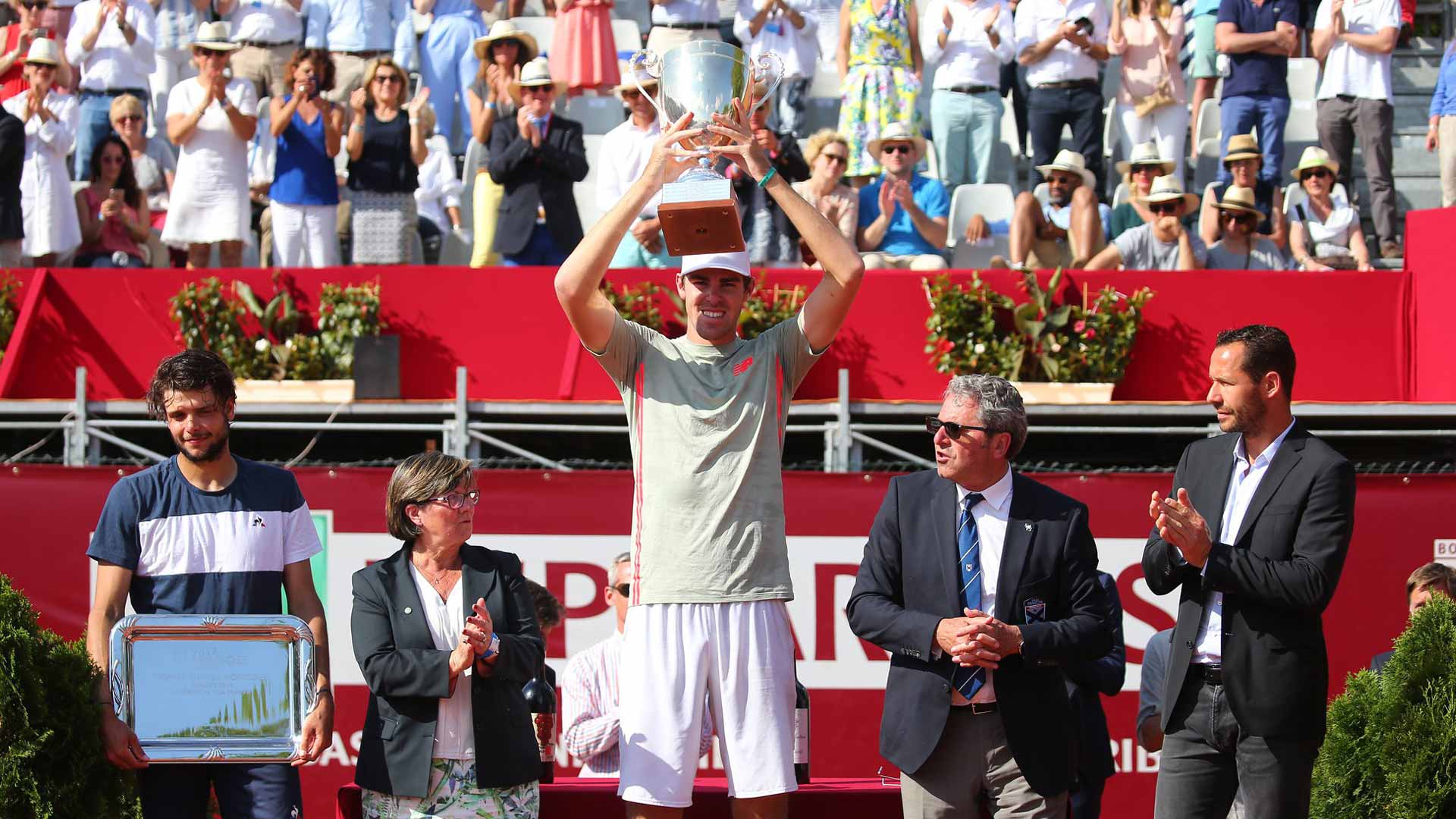 Opelka lifts the trophy in Bordeaux

"Looking back, having mono actually gave me the advantage of having a few months inside, and I wasn't as burnt out as most players are by the end of the year. It made me pretty anxious and hungry and I was ready to go. The timing of all that helped a lot and it put me in the position of being in the main draw of these big tournaments. Now I don't have to go through qualifying anymore."

Opelka has always set lofty goals for himself and views his Challenger success as stepping stones to bigger and better things at the tour-level. It did not take long for that transition to take flight, securing his first Grand Slam match win over John Isner at the Australian Open and following that up with another victory over Isner en route to the title in New York.

From sitting outside the Top 200 and in a hospital bed just nine months ago to a career-high No. 56 on Monday, it has been a meteoric rise for the 21-year-old. Opelka is finally showing what he's capable of and he's putting the rest of the ATP Tour on notice.