The Day Chang Stunned Lendl At Roland Garros: 'It Was About Survival'

Editor's Note: But for the COVID-19 pandemic, Roland Garros would now be underway. During the next two weeks ATPTour.com will look back on memorable matches and happenings at the clay-court Grand Slam, which tournament organisers are now hoping to stage in September.

Jose Higueras had mixed feelings as he watched his charge, Michael Chang, hit an underhand serve against top seed Ivan Lendl in the fourth round of Roland Garros in 1989. At the time, the coach didn’t realise that would become one of the most iconic moments in tennis history. Higueras didn’t even know if Chang would finish the match.

“It was about survival,” Higueras told ATPTour.com. “You do whatever you need to do to survive another day.”

Chang, a 17-year-old American, was competing at the clay-court Grand Slam for just the second time. He’d lost only one set en route to the Round of 16, including a 6-1, 6-1, 6-1 win against Pete Sampras. But his next opponent, Lendl, was a three-time Roland Garros champion, who was 36-2 on the season.

Lendl’s aggressive baseline game overpowered the teen for the first two sets, which the World No. 1 earned 6-4, 6-4.

“At the beginning, Michael was not too comfortable with the whole thing, competing on the centre court and playing Ivan Lendl,” Higueras said. “But as the match went on, he got more comfortable and started playing better and better, and Ivan got a little nervous. As the match got closer, Ivan got a little more tense, and Michael was just doing what he normally did, which was playing until the match was over.”

Higueras first began working with Chang towards the end of 1988, and he remembers a conversation they had about the American’s clay potential.

“I said, ‘Michael, I think if you keep working hard, you have a good chance to do well at the French Open in a few years,’” Higueras recalled. “He said, ‘Why not next year?’”

That same attitude carried into his match against Lendl. Chang was down, but Lendl didn’t eliminate his belief. Lendl’s power wasn’t intimidating him, either.

“Michael was a great counter-puncher, so he liked the pace. He used his speed well and was very smart,” Higueras said. “One thing he improved a lot in not a very long time was the fact that he used his speed to be more offensive. We all know Ivan had a big forehand, so it was pretty straightforward, really: He just played his forehand to his backhand.

As Chang raised his level in the third and fourth sets, he began cramping. At the same time, Lendl’s level dropped, and Chang was on the comeback trail.

Chang earned an immediate break in the fifth set, but the cramps began to take their toll. Lendl kept clawing back each deficit he faced, but the American would rush the net, throw up pace-less balls high over the net, and do anything to keep the top seed from gaining rhythm or confidence. 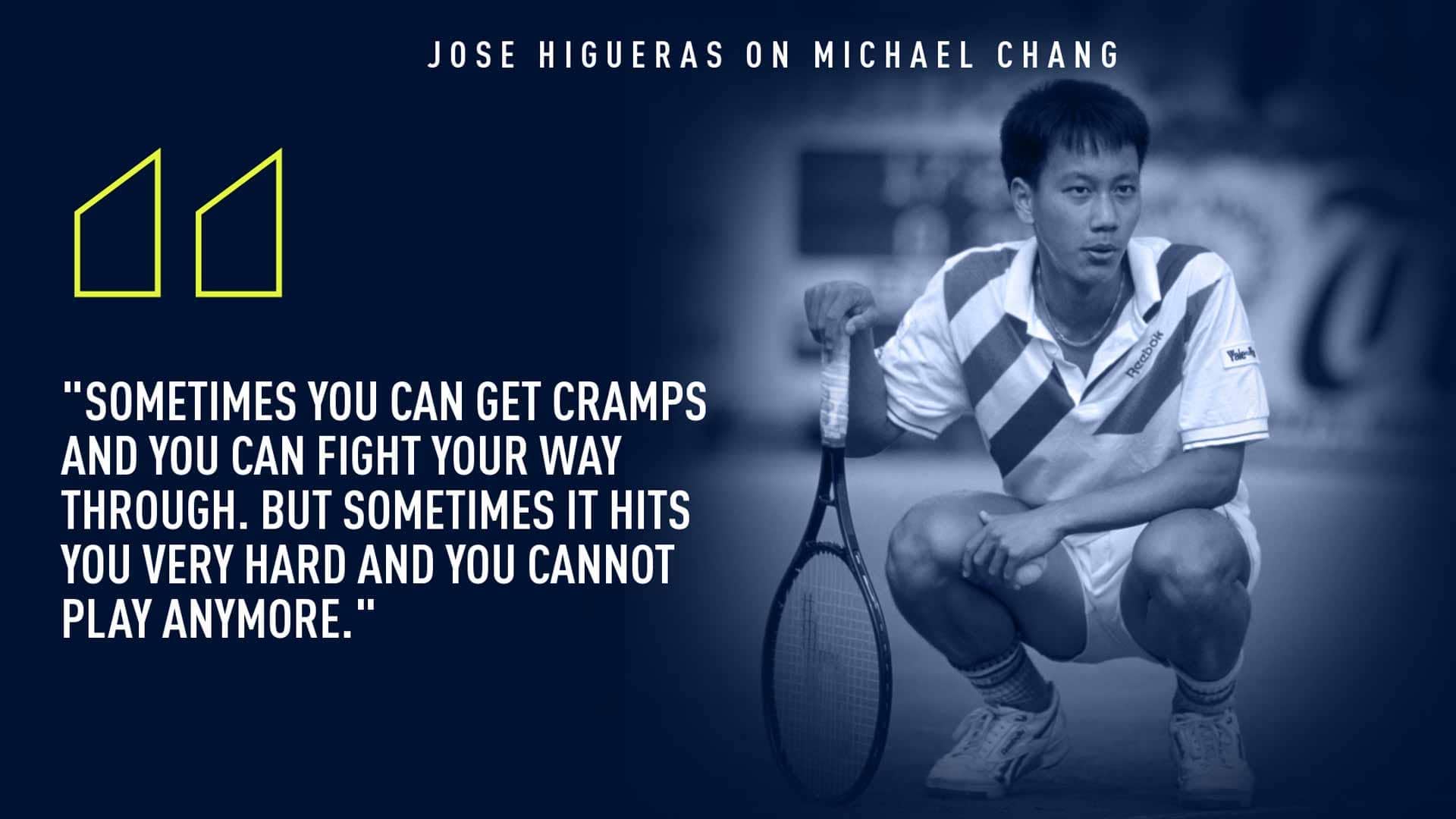 At 4-3, 15/30, Chang was desperate. His legs were locking up, and he hit the only underhand serve of his career. Lendl approached the net, and Chang hit a forehand pass that his opponent couldn’t handle.

“Michael is a great competitor, and he was going to try to do whatever he could, anything legal, to actually win the match,” Higueras said. “What was going through my head was that Ivan was pretty tight.”

Higueras thought it was a good sign to see how tight Lendl was, but he wasn’t convinced the cramps wouldn’t defeat Chang.

“Sometimes you can get cramps and you can fight your way through,” Higueras said. “But sometimes it hits you very hard and you cannot play anymore.”

Fans around the world, including former NBA superstar Dirk Nowitzki, who was 10 at the time, were on the edge of their seats as Chang won that point and eventually held that service game,.

“It was fantastic. I think everybody was rooting for Michael at the time because he was the underdog. You could see how exhausted he was at the end. That was sort of his breakthrough,” Nowitzki told ATPTour.com. “Everybody always roots for the underdog, so I wanted Michael to win, even though I liked Ivan Lendl growing up.”

Lendl couldn’t take advantage of Chang’s cramps. In the next game, on match point, the teen stood just feet from the service box to return the World No. 1’s second serve.

"I just stood up there and tried to bother his concentration,” Chang said. “I just tried to do whatever I could."

"Give him credit," Lendl said. "It's very difficult, if not impossible, to play with cramps." 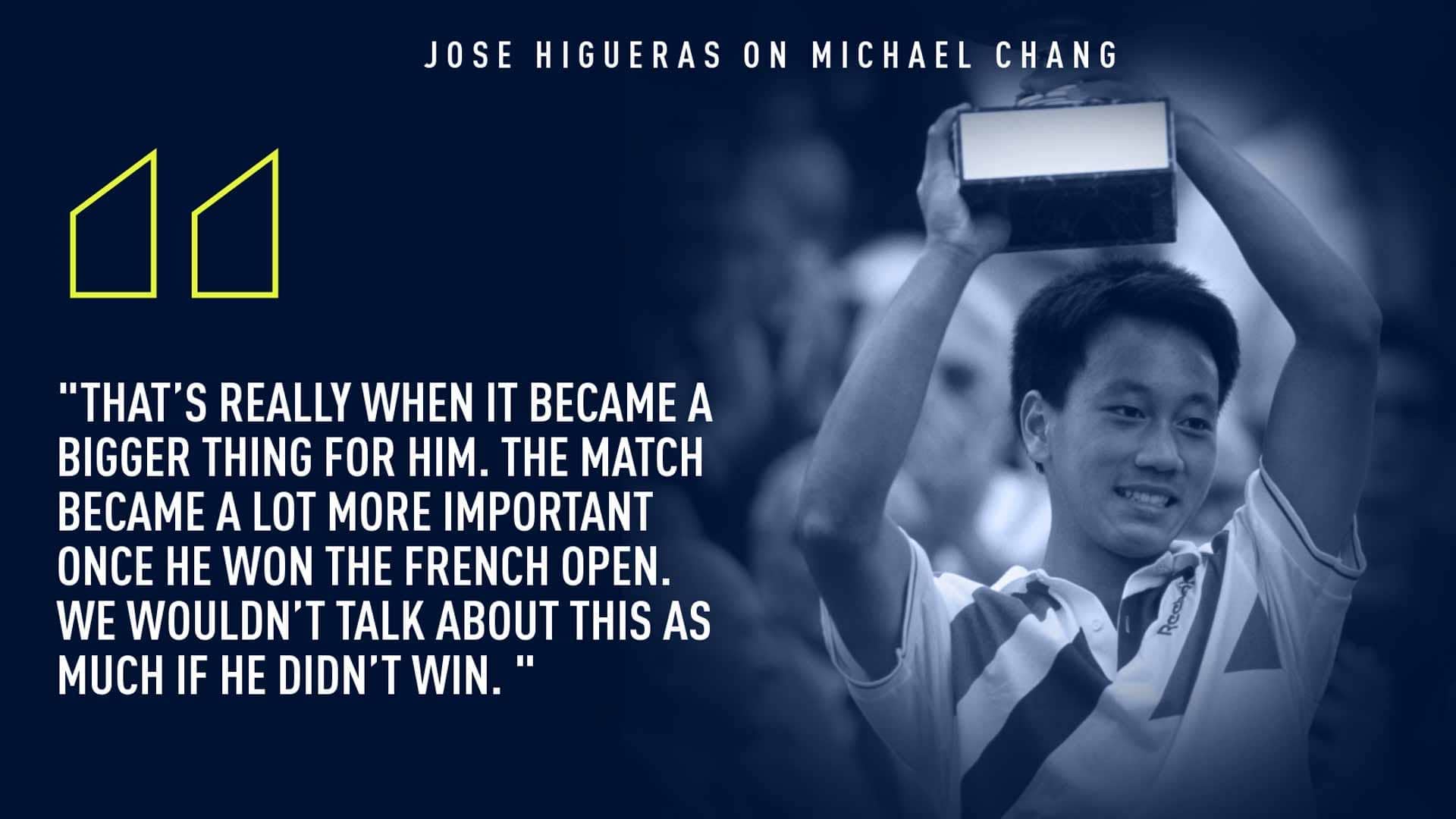 The job wasn’t done, as Chang was only into the quarter-finals. He defeated Ronald Agenor and Andrei Chesnokov in four sets each to set a final showdown against World No. 3 Stefan Edberg, who at the time was a three-time major champion.

“I actually thought he had a really good chance of winning that match because of the gamestyles,” said Higueras, adding Chang liked hitting against a target, and Edberg frequented the net.

“That’s really when [the Lendl match] became a bigger thing for him. The match became a lot more important once he won the French Open,” Higueras said. “We wouldn’t talk about this as much if he didn’t win.”