Jeremy Chardy is the tournament at the ATP Challenger Tour event in his hometown of Pau, France.

Chardy's Challenger: A New Role As Tournament Director In Pau

Josh Meiseles
This article contains:
ATPChallengerTour.com speaks to World No. 42 Jeremy Chardy about his new role as tournament director in his hometown of Pau, France.

Note: This article first appeared in 2019.

"I want this to be a Challenger that feels like an ATP Tour event. If the players have everything they need and the fans have a great experience, I've done my job."

Professional tennis players lead a very busy lifestyle. Constantly in flux, it takes them to all corners of the globe for 11 months of the year. Not only are they focused on their performance on the court, but their lives outside the lines are managed with great attention to detail and meticulous care.

Jeremy Chardy has taken the latter to the next level. Last month, the World No. 42 launched his own tournament on the ATP Challenger Tour. Located in his hometown of Pau, France, the Teréga Open Pau–Pyrénées kicked off its inaugural edition under Chardy's direction.

The Frenchman has achieved great success on the court. From his lone ATP Tour title in Stuttgart in 2009, to signature wins over Roger Federer and Andy Murray, and a quarter-final appearance at the Australian Open in 2013, he has finished inside the year-end Top 50 in seven of the past 10 seasons. But he admits that running a world-class event on the ATP Challenger Tour is one of the most arduous things he's done in his career.

Nonetheless, the tournament was a raging success. With years of knowledge and experience from competing on the professional circuit, Chardy was well-equipped to meet the needs of the players, while giving back to his hometown and the surrounding region.

Earlier in the week, Chardy hosted a coaches clinic with Patrick Mouratoglou, coach of Serena Williams. On the Friday of the tournament, renowned chef Yves Camdeborde cooked up a feast for a VIP event. And on Saturday, a star-studded exhibition featuring Chardy, Jo-Wilfried Tsonga, Gilles Simon and Mansour Bahrami took centre stage.

Chardy spoke to ATPChallengerTour.com about the new role...

Jeremy, talk about the role as tournament director in Pau and how it came about.
It is a really different job. It's the first time for me as a tournament director. I was working on it for a year and a half actually. It's completely new and a different pressure, but it was a great experience.

You've played professionally for nearly 15 years. What is it like to see the tour from a different perspective?
When you are a player, you have to practise, see the physio, rest, go to the hotel and wait for your match. When you are tournament director, you have more things to do. Much more than expected. You have to look at the matches differently, because you want the best players to go far in the tournament. You need to think what is good for the tournament and the crowd. You want French guys to win and your top seeds too.

How important is it to encourage the growth of the game in your hometown of Pau and the region?
For me, it's really important because I love tennis and it's my career. I always want to give back to my sport. When I was young, the city and the area supported me a lot. They gave me the chance to be a professional and I've always wanted to give back to them. That's why I always want to do something here. It's my way of giving back to the people. 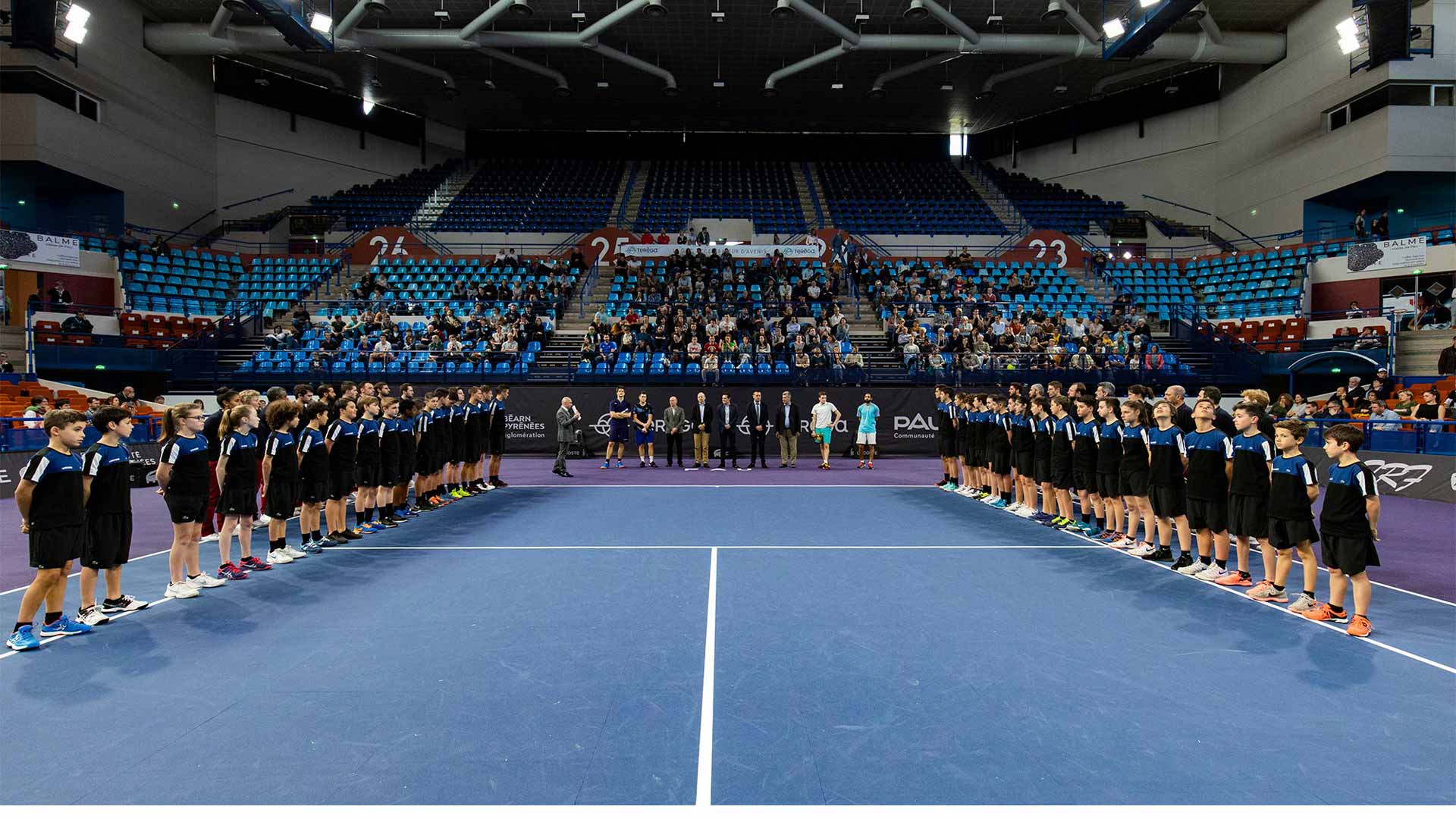 What was the biggest challenge in running a Challenger?
The biggest challenge was finding a sponsor actually. Running a tournament costs a lot of money and especially in the first year it was not easy. But I was lucky because my personal sponsor helped me straight away. And through them, I found so many other people and organisations who love tennis and want to support me and our team. It was really nice to meet new people and for them to help us and give us advice.

Being a player gives you a unique insight into life on the tour that most tournament directors don't really have. How has that helped you here?
I think I know exactly what the players want to be happy. When you are a player, you want a nice hotel, good transportation, practise courts, treatment with the physio and of course food. I was really focused on that. We have a great hotel and food, as well as the gym and the physio. We have ice baths and hot baths for the recovery. It's difficult to make three similar match courts too, but I did that and I'm really happy. 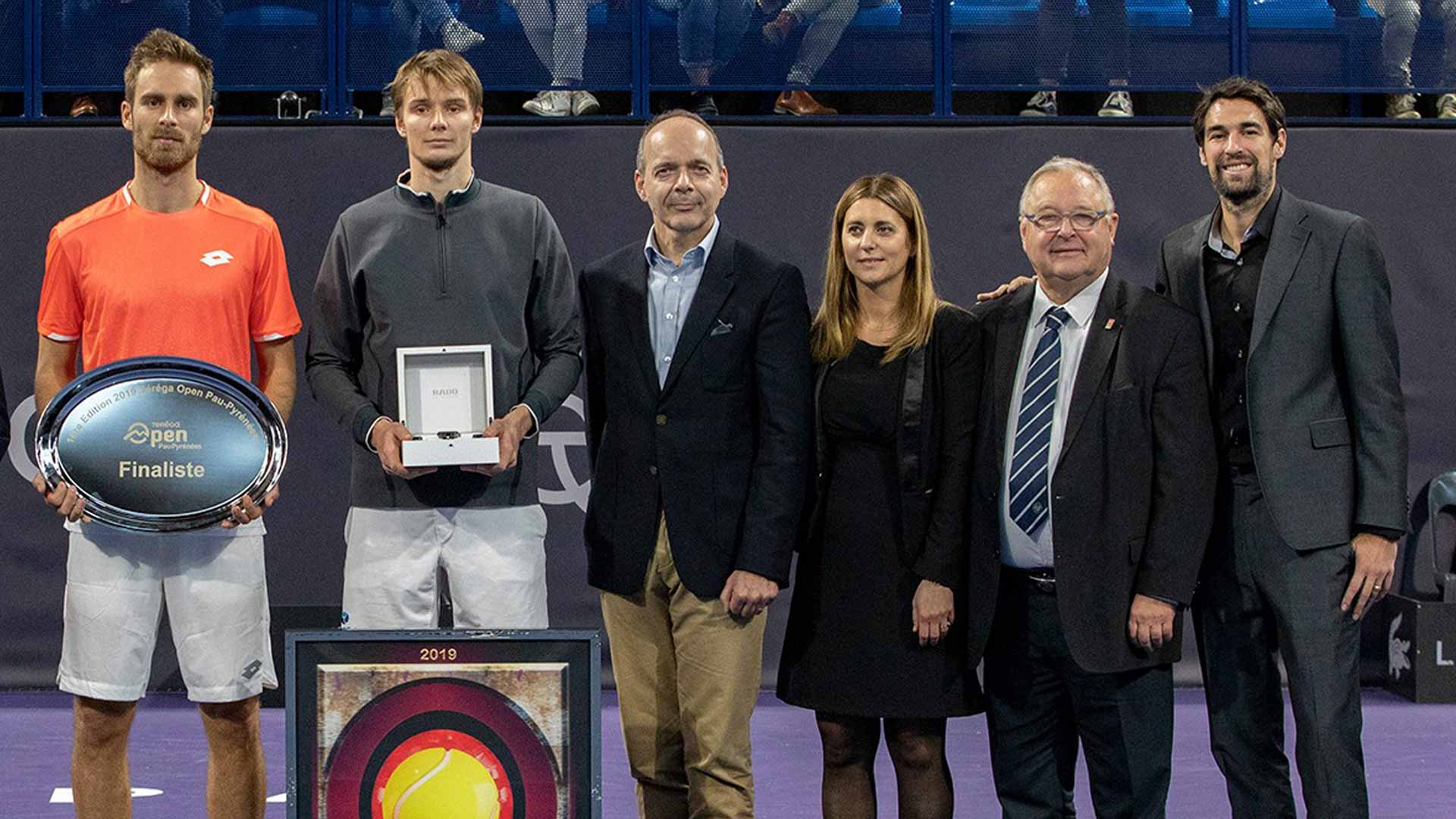 How did you get the local kids involved with the tournament?
We did three days of kids clinics and kids events. We put some smaller mini-tennis courts, we let them serve with the speed machine and we even created a tournament for them. It was for kids under 10 years old. They started in September and the winners of each tennis club in the region played against each other. The quarter-finals, semi-finals and final were held during the week, with the final on the centre court before the Challenger final. It was nice because the kids were so nervous, but they were happy. They played first to four games. It was really cute and the people liked it. We had 197 kids who played the tournament in total. The future of tennis is the kids. 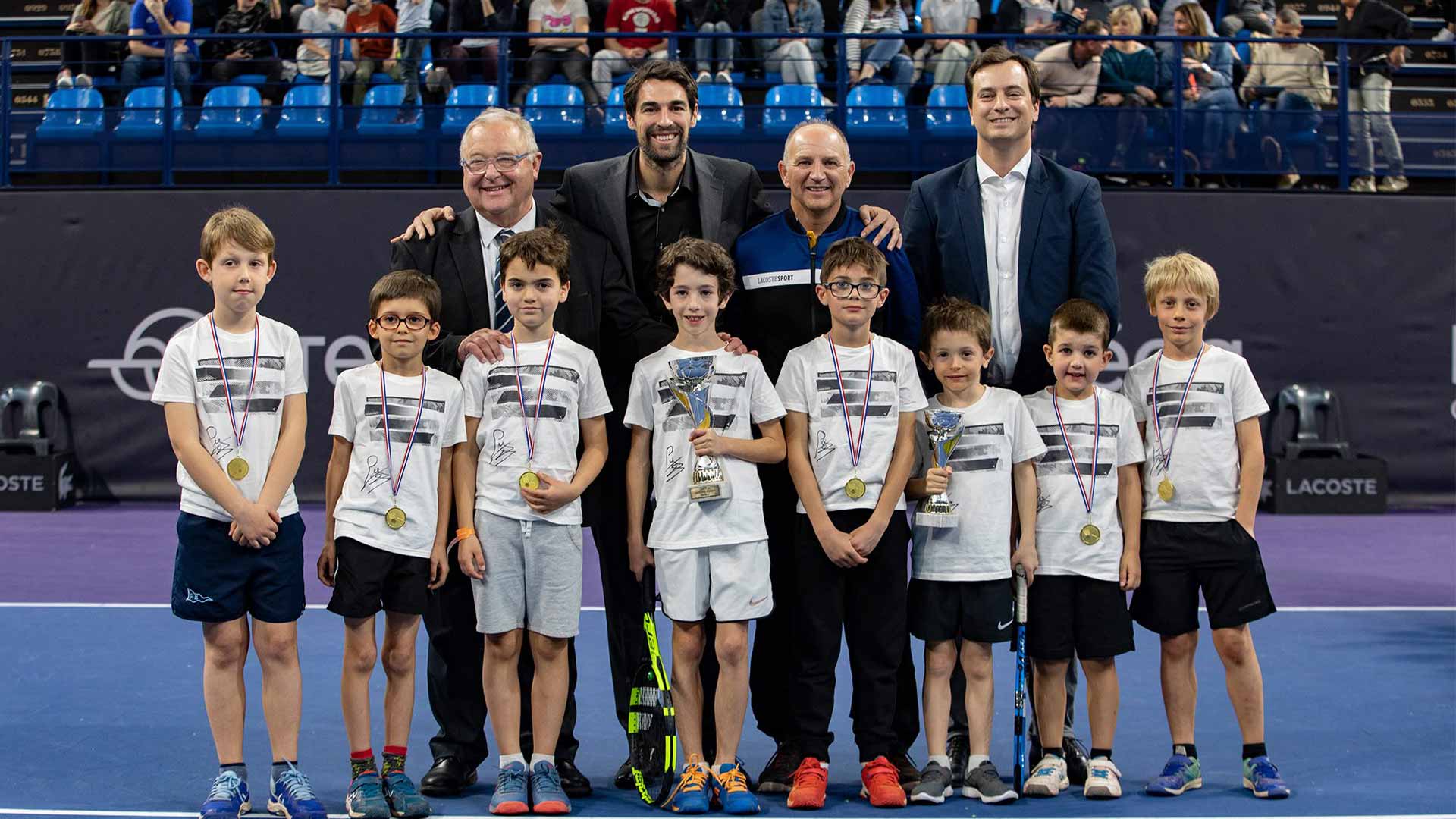 Your wife is actively involved in your tournament. How important is it to make this a family affair?
My wife loves sports and always supports me. She had a big part of the tournament, wanting to help with anything she can. She's from England, so it's easier for her to communicate and she helped us with some players, social media, the organisation. It's always nice to feel the support from the people you love.

You also had a charity exhibition with Jo-Wilfried Tsonga, Gilles Simon and Mansour Bahrami. How did that come about?
When I first thought of it, all the guys liked the idea. They supported me and it was nice. Patrick Mouratoglou also came to talk with the coaches. On the Monday morning, we had a conference with 35 tennis coaches of the region. We all talked about our experiences and answered questions. Especially with Patrick, because all of the coaches know him. It was also a good mix of ages of the coaches, from younger to older. 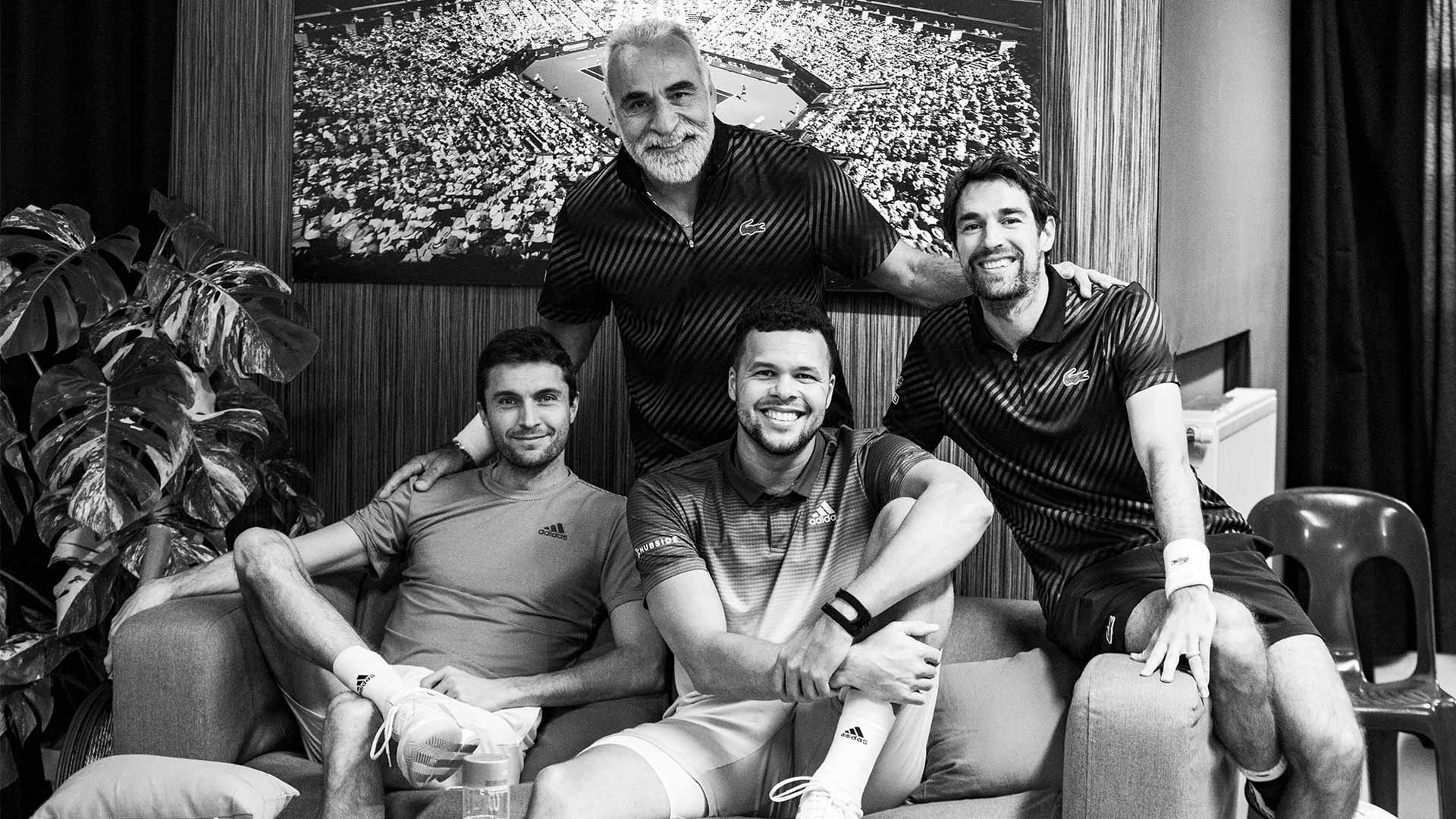 You're less than a year removed from winning a Challenger title in Surbiton. They have a great fan experience there. How important is it to make this a great experience for the players, but for the fans as well?
The fans are the most important part. Without fans, you cannot have a tennis tournament. For me, it's really important to attract fans to come to the stadium and let them interact with the players, and have a lot of activities for them too. My goal is to make the people happy. I want the people to really want to come back here. That they enjoy it a lot. I know people love sports in Pau. We have basketball, football and handball, but were missing tennis. It was my goal to bring back the tennis. It's a little easier as a player, because the people are excited to support you.

You have won six Challenger titles in your career. What are your fondest memories competing on the tour? How special was it?
When you're competing in Challengers, it always important because you're trying to get through to the Top 100. For that, you need to play good at this level and win titles. Whenever you win one, you're on the right path. You only have one goal: to get into the Top 100 and get to the ATP Tour. There are a lot of good memories for me. And I also won two titles coming back from injuries, so it's the same thing there. It's a mix of the young players with many dreams and the older players who get injured and try to come back up the ATP Rankings. I think the fans like it for this reason. There are a lot of really close matches.