ATP World Tour veteran Aisam-Ul-Haq Qureshi makes time to give back in Uganda through his 'Stop War Start Tennis' foundation. 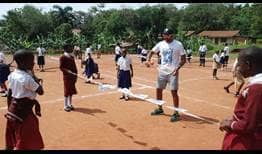 ATP World Tour veteran Aisam-Ul-Haq Qureshi, through his 'Stop War Start Tennis' foundation, makes time to give back in Rwanda. 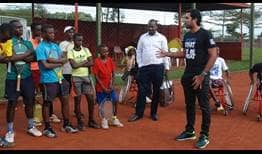 ATP World Tour veteran Aisam-Ul-Haq Qureshi makes time to give back in Rwanda through his 'Stop War Start Tennis' foundation. 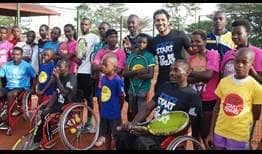 Giving back in Uganda is a priority for ATP World Tour veteran Aisam-Ul-Haq Qureshi and his 'Stop War Start Tennis' foundation. 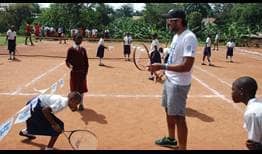 In addition to his visits, Aisam-Ul-Haq Qureshi has also helped the Lahore hospital raise money. 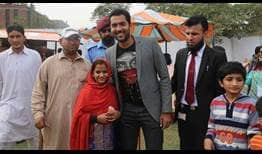 Stop War Start Tennis, founded by Aisam-Ul-Haq Qureshi, is dedicated to promoting peace through tennis. The Foundation aims to use the sport as a bridge to unite communities and nations that have been torn apart by conflict to reconcile their differences and heal the wounds of war.

Qureshi has served as UNDP National Goodwill Ambassador for Early Recovery since 2010, and raises funds for flood-affected victims through his family’s Haq Foundation. He is also a member of “Champions for Peace”, through which athletes aspire to help disadvantaged communities through sport.

Qureshi visits numerous project sites through Stop War Start Tennis, partaking in a meet and greet, on-court tennis activity, and official meeting to discuss how the project can be further developed. “Whether it be wheelchair tennis projects, amputee centres, or displaced peoples and orphanages, I truly believe that our great sport of tennis can bring some joy and happiness into the lives of the young and old,” says Qureshi.

In 2012, he travelled to Iraq, where he met with a victim of sectarian violence and visited a club specifically created for handicapped athletes; Sri Lanka, to back a wheelchair tennis program through which amputee soldiers are rehabilitated back into society; and Cambodia, to support the Killing Fields to Tennis Courts campaign that allows children to play tennis in areas cleared of landmines. Qureshi also revisited Peshawar in his home country of Pakistan, where he is attempting to revive the local tennis club following its destruction by those displaced by the Taliban.

A recipient of an inaugural ATP ACES For Charity grant in 2011, Qureshi donated $10,000 to support the United Nations Development Program’s flood recovery efforts in Pakistan. He raised additional funds by auctioning memorabilia collected from ATP World Tour players including Roger Federer, Rafael Nadal and Andy Murray. He visited the areas ravaged by the 2010 floods through his role as UNDP Ambassador.

Qureshi and the foundation will be using a new tagline, “It Takes Two”, in order to promote the importance of building successful partnerships for a winning team. In 2018, Qureshi and Stop War Start Tennis plan to spotlight existing charity projects, assess the needs of local partners and more. Qureshi will also supply hearing aids to the hearing impaired.

Two-time Arthur Ashe Humanitarian of the Year winner Qureshi refused to allow Pakistan's daily workers to be forgotten during the COVID-19 pandemic. Through his foundation Stop War Start Tennis, Qureshi committed to financially supporting ration bags for 1,000 families that were unable to work and earn their daily sustenance. He has since raised enough money to support thousands more. Each ration bag consists of flour, rice, oil, grains, tea, milk and soap, and can feed a family of five. Qureshi got out in the field himself, making deliveries to those families.