The Bryan Brothers and Aryna Sabalenka paid a visit to the Baptist Health Children's Hospital and Cancer Center.

ATP Staff
This article contains:
The Miami Open presented by Itau supports a variety of causes through the support of the ATP Tour's stars in the Miami Unites program

Some of the most recognisable ATP Tour players lent their time to Miami Open Unites at the 2019 Miami Open presented by Itau to support a wide variety of charitable causes, dedicated to giving back to the South Florida community.

“The kids were very nice and upbeat. They’ve been dealt unfortunate hands and the way they’re dealing with it is inspiring,” said Bob. “It’s great to give back and if we can brighten their day a little bit, it’s worth it for us.”

Alexander Zverev, defending champion John Isner and Roberto Bautista Agut visited the Greater Humane Society of Miami. The players groomed the animals in order to increase their chances for adoption.

Kei Nishikori, Stefanos Tsitsipas, Marin Cilic, Nick Kyrgios and Nicolas Jarry led a community tennis clinic and Q&A at the Hard Rock Stadium for UNICEF’s Kid Power program. Members of Marjory Stoneman Douglas High School boys' and girls' tennis teams participated in the event, which also included discussions on overcoming adversity and being a positive force in the community. A shooting at the high school in February 2018 killed 17 students and staff members.

2018 BNP Paribas Open champion Dominic Thiem, Miomir Kecmanovic and Guido Pella helped repair a home by painting and landscaping. Their efforts supported the work of Rebuilding Together, an organisation that repairs and rebuilds homes for Miami-Dade County’s senior citizens, veterans and disabled individuals.

In 2018, the Miami Open presented by Itau and ATP Tour stars welcomed members of the boys' and girls' tennis teams from Marjory Stoneman Douglas High School for an evening session, which was called 'Marjory Stoneman Douglas Night' to honour the survivors of a shooting on 14 February 2018 in which 17 students and teachers from the school lost their lives.

"I was able to speak to both teams, which was very cool. I thought everyone on the girls' team, guys' team, they were so nice," Isner said. "What those kids are doing right now is pretty impressive, and they are turning a horrible tragedy into something pretty positive, it seems. It was great to meet them. I know they got to meet a lot of players, as well. So to have them here, it was very, very cool." 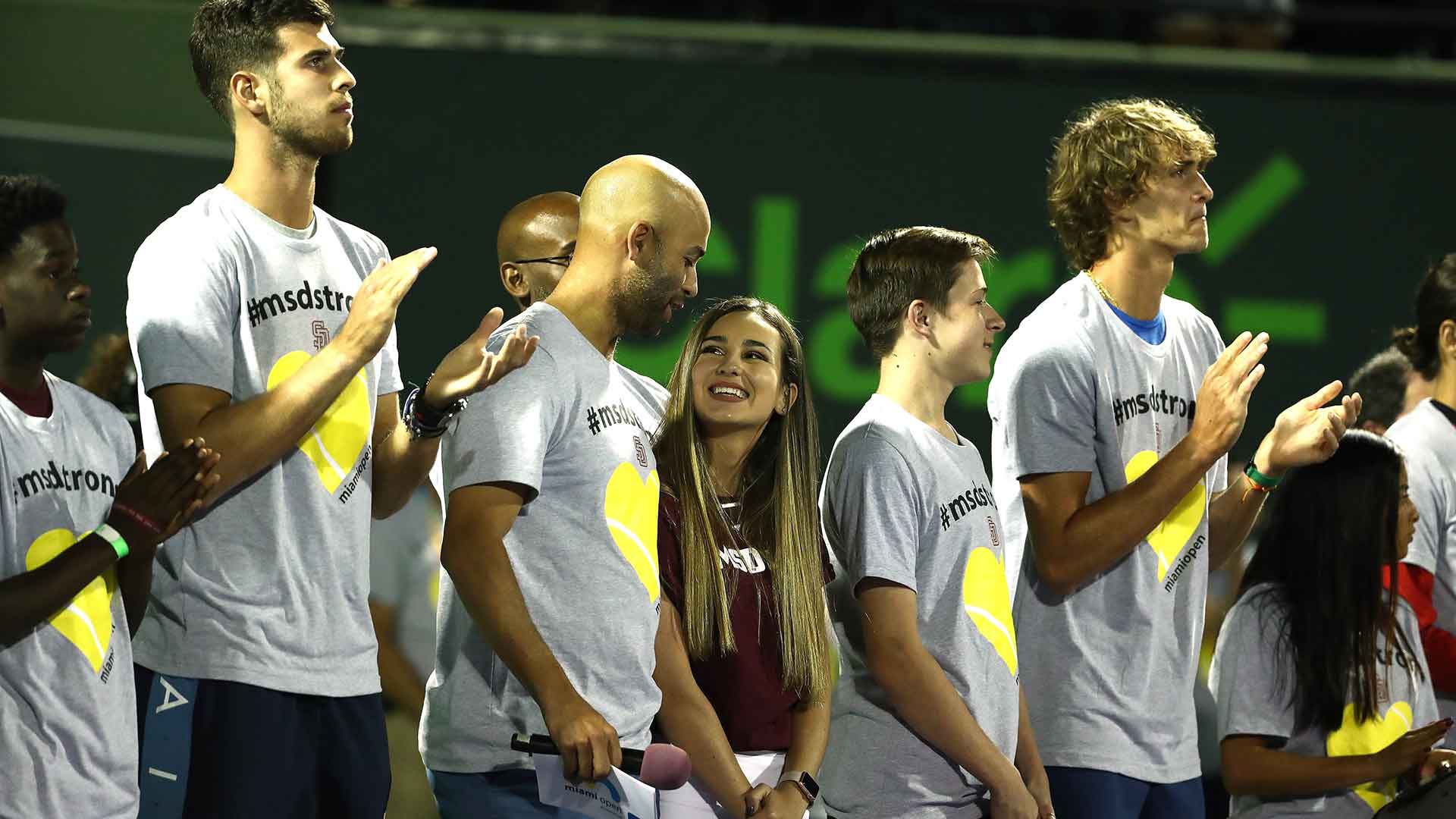 Nick Kyrgios invited the teams to join one of his practices. Those players got an added bonus when Boston Celtics star Gordan Hayward, who played tennis competitively as a junior, joined in.

“I don’t think I’ve done anything that special, just to bring them out here to a training session, to give them the opportunity to meet professionals and make their day, that’s easy for me,” Kyrgios said according to the Miami Herald. “It made the training session more fun for me and, obviously, it’s a tough time for them, so if they can get out here and get their minds on something else, it’s pretty important."