20-year-old Tung-lin Wu is one of four players from Chinese Taipei in the Top 500 of the ATP Rankings.

Meet The #NextGenATP On The Rise In Chinese Taipei

Chinese Taipei is surging in the Asian tennis landscape, with 17-year-old Chun-hsin 'Jason' Tseng and 20-year-old Tung-lin 'Tony' Wu kicking off their professional journeys and No. 1 Jason Jung continuing to make strides

Tennis in Asia is in the midst of a golden age. With World No. 6 Kei Nishikori leading the charge for Japan, 2017 Next Gen ATP Finals champion Hyeon Chung flying the flag for South Korea, freshly-minted Top 100 star Prajnesh Gunneswaran enjoying a breakthrough campaign for India, and China steadily establishing itself as an emerging force, the continent is enjoying great success in recent years.

While it might not have the championship pedigree of its neighbors, Chinese Taipei is also making great strides on the professional circuit. Located off the east coast of China's mainland, the island is finding its footing on the ATP Challenger Tour, with a pair of veterans and a pair of emerging stars flying the flag.

For nearly 20 years, Yen-hsun Lu has been the driving force. The highest-ranked player to hail from Chinese Taipei, he ascended to No. 33 in the ATP Rankings in 2010 after reaching the Wimbledon quarter-finals. Also the all-time Challenger titles leader (29) and a member of the ATP Player Council, Lu has long been the tennis inspiration in his home island of just 23 million people.

But, as the 35-year-old's career nears its conclusion, a new contingent has assumed the mantle. Led by World No. 134 Jason Jung, a three-time ATP Challenger Tour champion and former standout at the University of Michigan, tennis in Chinese Taipei is entering its most successful era. Jung is joined by 17-year-old Chun-hsin Tseng and 20-year-old Tung-lin Wu as three of four players in the Top 500 of the ATP Rankings.

You May Also Like: Challenger Chronicles: Jason Jung, Part 2

At the age of 29, Jung recently reached his first ATP Tour quarter-final on the grass of Newport in 2018 and followed that with another quarter-final showing two months ago in New York. He is proud of how far tennis has come in Chinese Taipei.

"Rendy has always been so solid. Reached the quarter-finals at Wimbledon and he has the most Challenger titles. And we also had a guy named Jimmy Wang who was a Top 100 player," said Jung. "We've always been pretty good, but I think the transition has been tougher for us from juniors to pros. Our guy who made the final in Santiago (Wu) doesn't normally play on clay, so that was a big result. For these guys it's good, because once one does well the others will start to believe that they can too, and it builds from there.

"I changed nationalities in 2015 and the federation has helped me quite a bit. I'm the No. 1 guy now. I want to set a good example and pass on my good traits and work ethic to the younger guys. A lot of them haven't had the experiences I've had. It's pretty small and it helps to have us doing well so it inspires the younger guys." 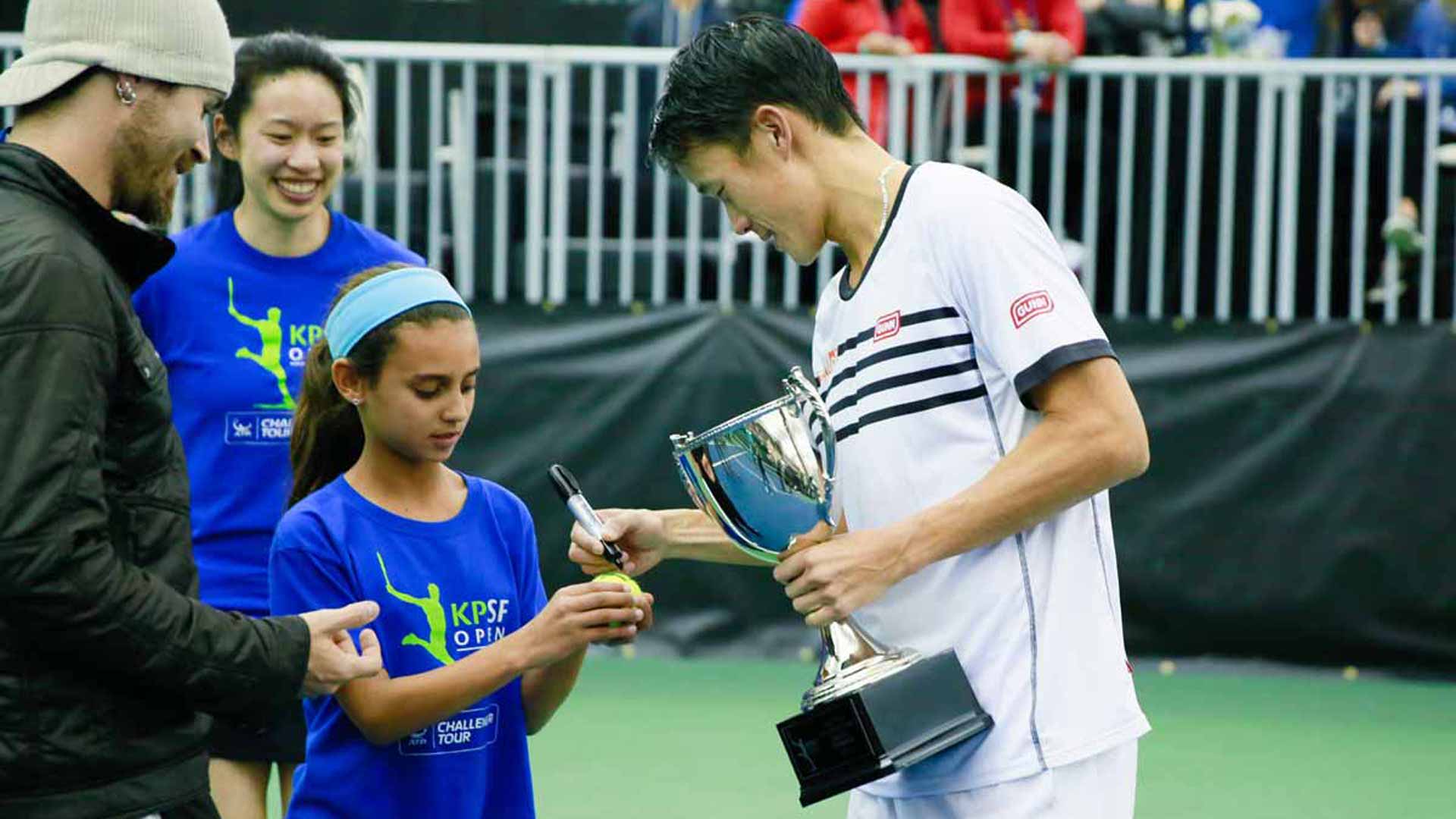 Jung after winning the title in San Francisco in 2018

Nicknamed Jason and Tony, respectively, 17-year-old Tseng and 20-year-old Wu are hoping to take Chinese Taipei to even greater heights in the tennis landscape. Tseng is just beginning his pro journey, following a highly successful junior career that included titles at Roland Garros and Wimbledon in 2018. And last month he would earn his biggest professional victory to date, advancing to the second round at the Phoenix Challenger with an upset of Jung from a set down.

"I've always really respected Jason and he's now our No. 1 player. We've practised many times before and know each other very well," said Tseng. "And I'm also very good friends with Tony. He texted me right after I won that match in Phoenix. We communicate about tennis all the time and talk about how we're doing. Seeing him do well motivates me. It gives me more confidence. Also many Asian players are doing well, reaching the Top 100 and Top 50. Yoshihito Nishioka too."

Tseng carries a unique background to the tour. He admits that without his family, none of this would be possible. While his father Yu Te Tseng travels with him throughout the year, his mother Chung Han Tsai remains in Taipei City to run the family's food stand at the Lehua night market. There, she sells tanghulu, a treat made of glazed fruit and tomatoes on a stick, coated in a hardened sugar syrup.

"I want to support my family, but for me, it's no pressure. I want to be like the other great Asian players. I focus on what I do in practise and keep improving every day. In the future, I have to play at a higher level. My opponents in Challengers are always very fit, so I need to get stronger physically and mentally. It's very important. In the end, everyone has a good technical game and can hit a good ball, but you have to play well in the important points." 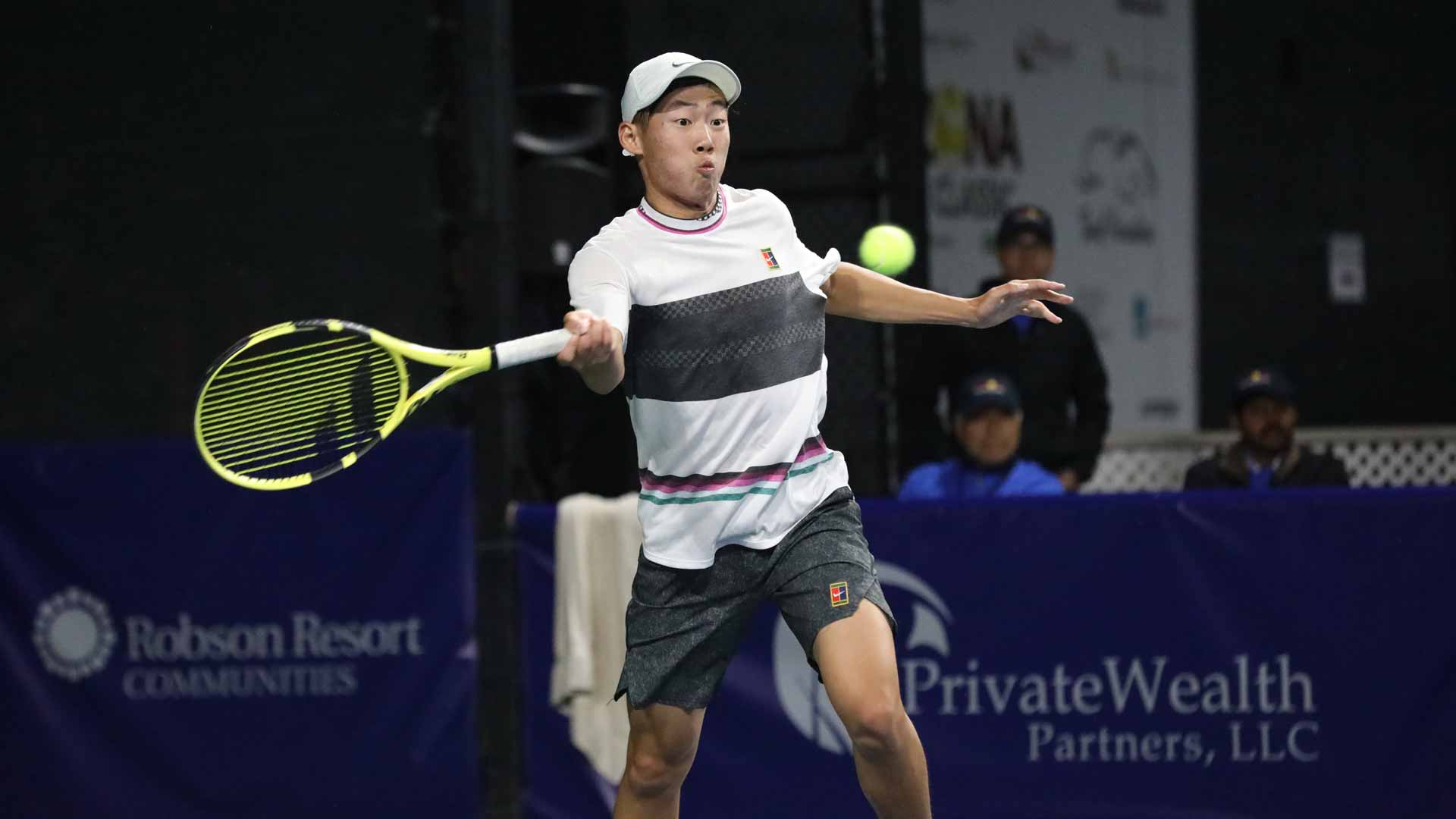 Wu, meanwhile, is already finding his footing on the ATP Challenger Tour. In March, the 20-year-old burst onto the scene with a stunning run to the final in Santiago, Chile. Entering the week, he had never won consecutive matches in his fledgling Challenger career, but that would all change on the Chilean clay. The young man they call Tony would topple clay-court stalwarts Facundo Bagnis, Thiago Monteiro and Pablo Andujar, before succumbing to Hugo Dellien in the final. Five wins in six days saw him vault to the Top 20 of the ATP Race To Milan and just outside the Top 300 of the ATP Rankings.

"I was actually very surprised by my performance there," said Wu. "There were three Challengers during that period in China, but my ranking was not good enough to get in. That's why I went to Santiago and tried to get some [ATP Rankings] points. Even though I loss the final, that was still an exciting week for me.

"I believe tennis in Chinese Taipei is getting better and better. I do hope to become a role model for the younger generation. This is the reason I started my own blog and shared lots of thoughts of being a professional tennis player. I hope my experiences can help others.

"I am very happy that Jung and Tseng are also doing so well. I get along with them and seeing them making so much progress actually pushes me to get better. I think this good atmosphere could be an extra boost for tennis in Chinese Taipei."

Perhaps part of the reason for the recent tennis renaissance in Chinese Taipei is the success of their two biggest tournaments. The ATP Challenger Tour descends on the island twice a year - in the capital of Taipei City in April and the metropolis of Kaohsiung in September. Last week, Dennis Novak lifted the trophy in Taipei's sixth edition, while Gael Monfils thrilled the crowd with a title run in Kaohsiung's seventh edition in 2018.

In fact, with multiple tournaments at the highest Challenger levels (110 & 125), Chinese Taipei joins China, France, Italy, Mexico, the UK and USA as the only countries and territories with that distinction. Already boasting a pair of world-class events and with a handful of players on the rise, Chinese Taipei is fast becoming an integral part of the Asian tennis scene.