Juan Martin del Potro will return to the Top 4 of the ATP Rankings for the first time since February 2014 on Monday after advancing to the Roland Garros semi-finals for the second time (also 2009).

The sixth-seeded Argentine fought back from 1-3 down in the third set on Thursday to beat third seed Marin Cilic of Croatia 7-6(5), 5-7, 6-3, 7-5, in a rain-interrupted two-day victory over three hours and 50 minutes.

“I'm feeling so, so happy that I made the right decision for play here,” said Del Potro, smiling. “I am doing well. Of course, I didn't expect to get in semi-finals a couple of weeks before. But now I'm here, and I'm still alive. Physically I’m good, and hopefully I can be ready for tomorrow.

“Everybody knows that I was close to quitting this sport two years ago, but I never give up. I have been trying and trying every day to fix the problem in my wrist. And in the end, I got it, and now I'm having a great present, looking forward for the future. Of course, I didn't expect to be in the Top 5 again, to reach semi-finals at the big tournament after all my injuries.”

You May Also Like: Rafa Charges Past Schwartzman After Rain

Del Potro, who will rise from World No. 6 to at least No. 4, a position he last held on 10 February 2014, improved to 11-2 lifetime against Cilic, with his fifth straight clay-court match win against the Croatian. The pair had resumed their Paris clash at 6-6, 5/5 in the first set tie-break, after rain had suspended play on Wednesday night.

Del Potro, who lost to Roger Federer in the 2009 Roland Garros semi-finals, struck 31 winners, including 19 aces against Cilic. In a match of small margins, it was Cilic’s 74 unforced errors that was the difference.

The 29-year-old Del Potro has competed in three other Grand Slam championship semi-finals, highlighted by his lone trophy at the 2009 US Open (d. Federer). He has also lost at the semi-final stage at Wimbledon in 2013 (l. to Djokovic) and last year’s US Open (l. to Nadal). 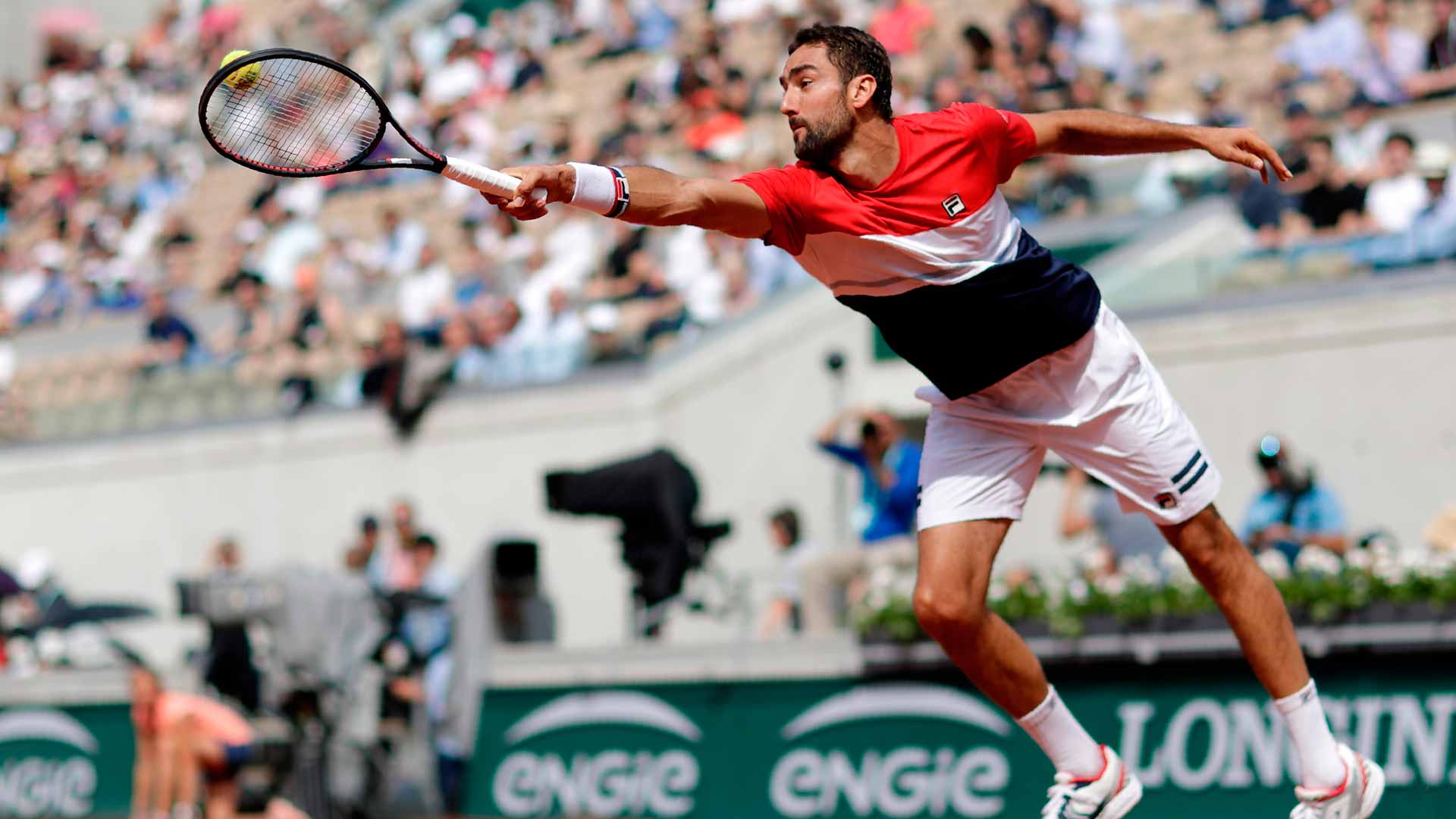 Cilic did well to avoid danger on Wednesday while serving at 5-5, 0/30, when rain first suspended their match. The Croatian recovered, saving three break points to hold for the sixth straight time. But he was not able to take advantage of two straight return points won on Del Potro's serve in the tie-break, losing the final four points to fall a set behind.

The first to serve on Thursday afternoon, the Argentine was immediately aggressive with his forehand to earn a set point, despite trailing 3/5 in the tie-break Wednesday. He then staved off Cilic's aggression to his backhand corner, with the Croatian eventually netting a forehand to give Del Potro the opening set.

“It was very important to win the first one,” said Del Potro. “It didn’t have a good night because I was thinking too much, where could I serve, "T" or wide? I asked too many questions to myself. But then I got lucky to win the first set, playing two good points.”

Cilic came under pressure in the second set, including a 16-point fourth game. Through six games, Del Potro had won 12 of his 15 service points, while Cilic had earned 17 of 28, but the tables soon turned. Cilic became ultra aggressive, using his forehand to dictate play.

Two break points for Cilic went begging at 3-3, but two games later Del Potro struck a double fault on break point, as he appeared to be distracted by a member of the crowd, who he immediately went to talk to. Clearly annoyed, Del Potro channelled his energy to break back immediately with Cilic committing three straight groundstroke errors.

However, Cilic refocused to win 17 of the next 25 points, with Del Potro striking a forehand long — his 13th error to end the 66-minute set — and took a 2-0 lead in the third set. Miraculously, having saved one break point at 1-3, Del Potro went on a charge and clinched 19 of the next 22 points.

Del Potro took control at 6-5 in the fourth set, sealing his first break point chance when Cilic lost his concentration and struck his third crosscourt backhand long. Del Potro did not need a second invitation, closing out the next game to love.

Cilic admitted he regrouped well in the second set. "I played well that second set. Of course a couple of points could have made the difference. And I think that third set, if I would have went up [another level] a little bit more with the score, it would definitely have helped to have that extra freedom and to be even two sets to one up."

Del Potro is now 28-7 on the year, which includes a 15-match winning streak and back-to-back titles at the Abierto Mexicano Telcel presentado por HSBC (d. Anderson) and his first ATP World Tour Masters 1000 crown at the BNP Paribas Open (d. Federer). Cilic, who had been bidding to become the first Croatian man to reach the Roland Garros semi-finals since Ivan Ljubicic in 2006, drops to a 22-9 mark on the season, which includes a runner-up finish at the Australian Open (l. to Federer). 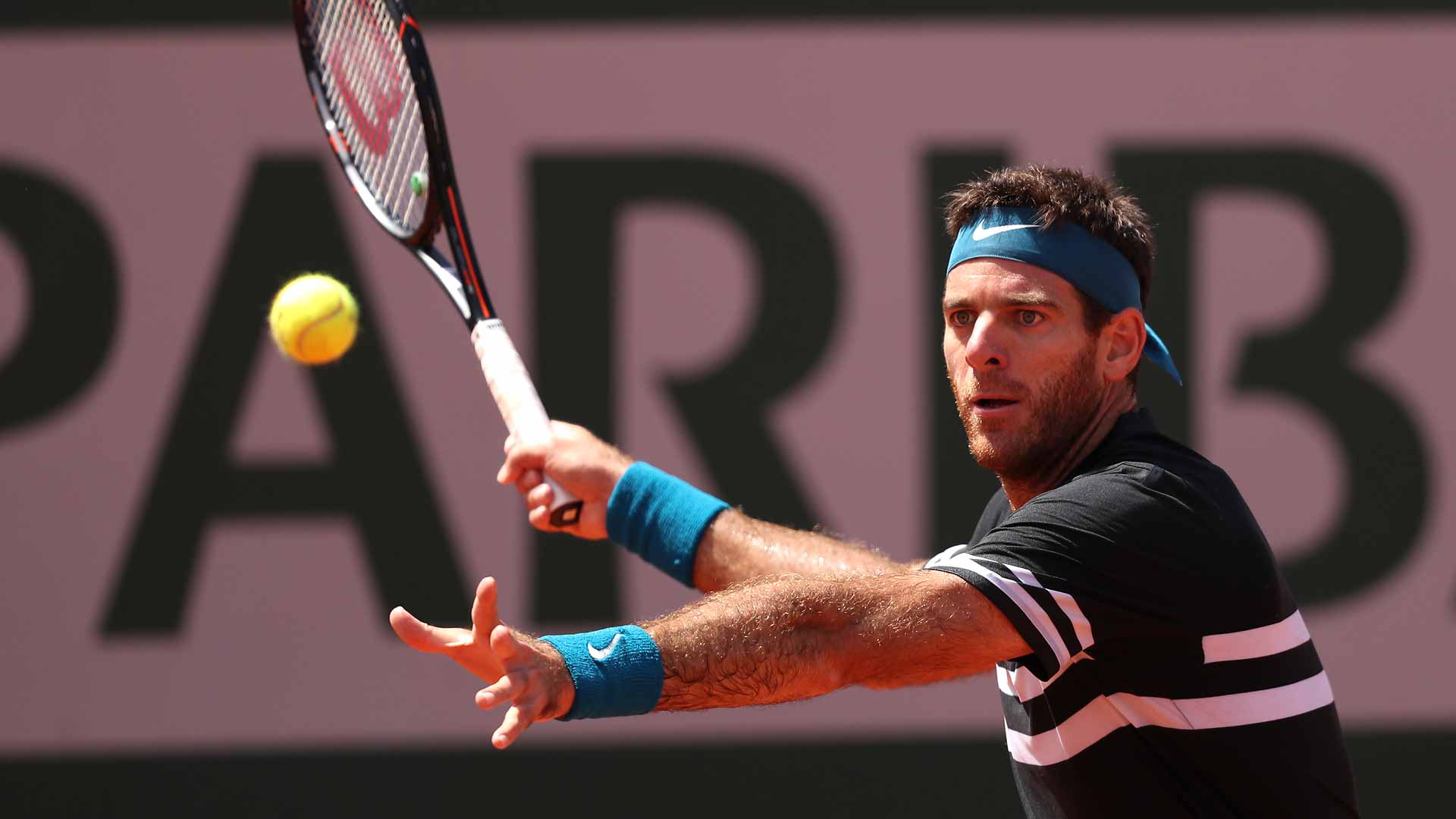