Daniil Medvedev poses with Gilles Cervara, the Coach of the Year in the 2019 ATP Awards, during the round-robin stage in Perth at the ATP Cup in January.

Coaches' Corner: Why Cervara And Medvedev Are A Winning Team

Daniil Medvedev was concerned that he wasn’t landing his first serve. Sitting in the Team Zone are the Russian's coach Gilles Cervara and Marat Safin, the captain of Team Russia, at the inaugural ATP Cup. Italian Fabio Fognini, who has landed in Perth barely 24 hours earlier, wanting to spend more time in Barcelona following the recent birth of his daughter, Farah, is landing big shots, taking the first set 6-1. Medvedev looks over early in the second set, seeking help. Safin, who hasn’t wanted to tread on the toes of a player’s regular team, is concise and direct: “Throw it up, down the middle.” Medvedev does just that, hits an ace and returns a smile. He goes on to register his first win of the competition.

Safin is old-school, not wanting too much data to differentiate his read of the game. He told ATPTour.com in Perth, “I don’t want to interfere in some things between a player and their coach, because sometimes if I say something, it might not have the right effect. I want them to believe in themselves and to do the best they can do. It's a very delicate matter, because everybody has his own character and own approach; how they want to be approached, and I don't want to make any damage, that's for sure. I will try to be careful with my words.” For Cervara, named by his peers as Coach of the Year in the 2019 ATP Awards, being alongside Safin, a former No. 1 in the FedEx ATP Rankings, was an education into how a top player viewed a match unfolding. You could tell had Safin the total respect of Medvedev and Karen Khachanov.

“It was interesting being with Safin at the ATP Cup,” Cervara told ATPTour.com. “It was not the same view as I had from my coach position, as he saw it from the fact that he was a top player. In the Strategy Room or courtside, he always asked me if he could say something to Daniil, but he was always a sounding board for advice, even though how we worded our thoughts may have be different. I haven’t had mentors from coaching, but I do admire people with personality, from other sports and life in general, the way they live their lives and understand life. Marat was never pushy, but offered a welcome, different perspective and I learned an awful lot, just as I did with my own career, which was never at this level. But I understood what was happening to me on the court and I developed to help me to transfer my knowledge, my vision, to a player.” 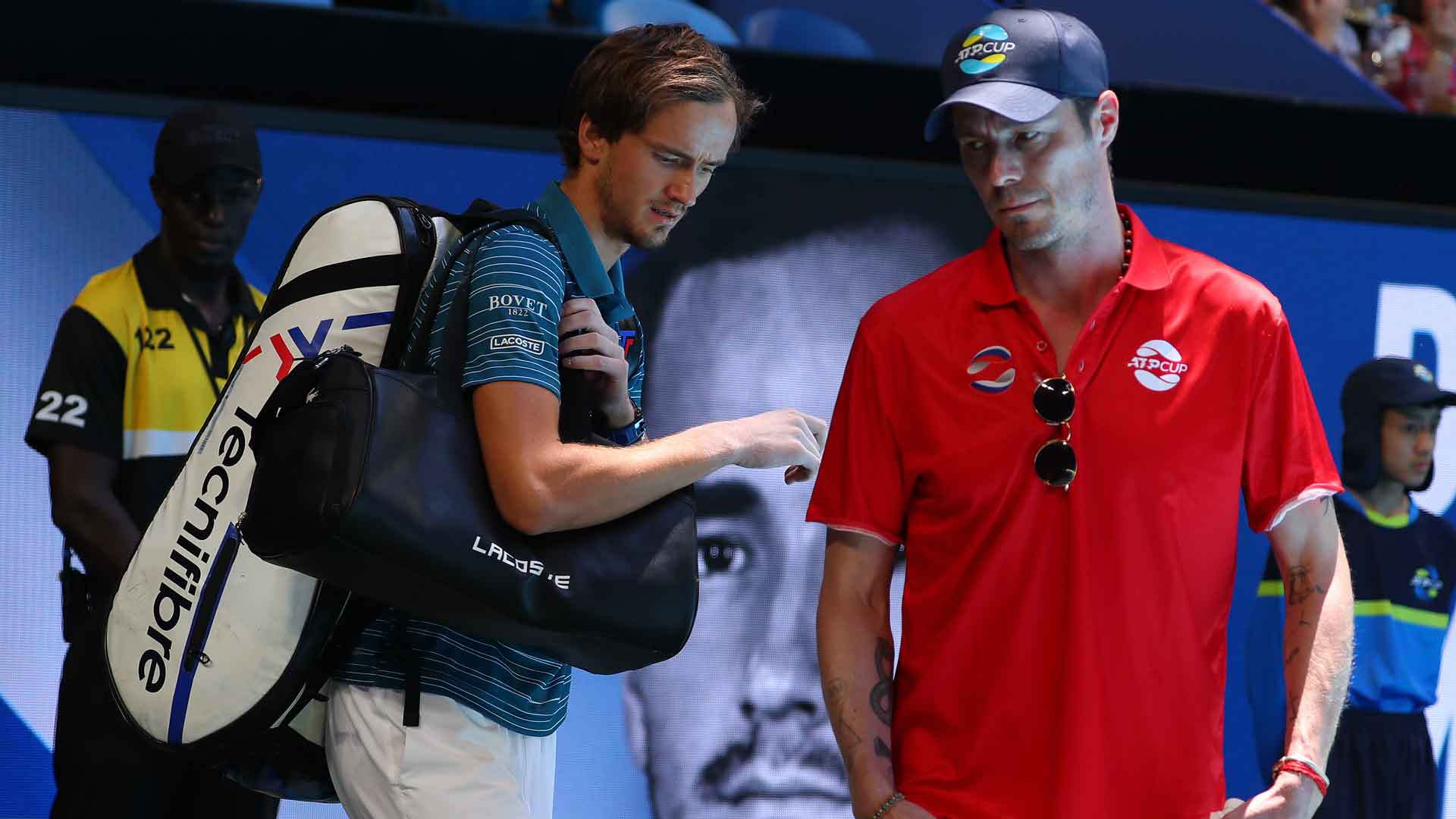 The 39-year-old Cervara established the Elite Tennis Center in Cannes seven years ago with Jean-Rene Lisnard, and it was after a visit — and a lot of questions — from Medvedev’s parents [Sergey and Olga] in 2015 that their son relocated to the south of France for better training facilities and to stay with his sister, Elena, who already lived there. “While it wasn’t my first coaching experience, I wasn’t well known, but we developed a good connection,” admitted Cervara. “In 2015, his main coach was supposed to go to Marseille with Daniil, but he couldn’t as he was at another tournament with another player. So it was decided that I would go with Daniil to Marseille. We did a good job together and I was careful and sensitive about his personality, so he played well and felt good about his tennis. One year later, for the grass season, we went to a few tournaments and later in 2016, attended a few more. In the off-season we said 'goodbye', but we felt we’d worked well together and that’s how our relationship developed.”

It wasn’t until after Medvedev, then aged 21, had beaten Stan Wawrinka 6-4, 3-6, 6-4, 6-1 in the 2017 Wimbledon first round, that Cervara started to understand how he could help. Cervara, who became the Russian’s full-time coach later that year, remembers, “It was a big victory to beat a top player like Wawrinka. It meant something. I was not working with him all the time, but he was a good player, although I could see that there was nothing consistent in his preparation. That’s what we developed, when he asked me to be his full-time coach. I had a clear vision that we needed to improve this day-after-day and built a team around Daniil to help him.”

The team of physical trainer Eric Hernandez, psychologist Francisca Dauzet and sports scientist Yann Le Meur, in addition to those who analyse data from all of Medvedev’s matches, shared in Cervara’s coaching honour, as voted for by his peers in the 2019 ATP Awards. “Eric was there from the beginning, working at the centre as a physical trainer, but I knew as a coach Daniil’s physical strength was weak and we needed to do better” said Cervara. “It was the same with the mental approach with Francisca, with Daniil accepting and realising he need to do this work. Daniil was sensitive to Yann, who I’d known before, and we worked well together to be strong physically, because recovery in sports is a small part. If you’re not well trained physically, recovery doesn’t mean anything.”

They were all essential to Medvedev’s success last season, when the Russian posted an ATP Tour-best 59 match wins, 46 hard-court victories and nine final appearances, in addition to reaching a career-high No. 4. “Did Daniil’s 2019 surprise me?” asks Cervara. “I want to say in one part, yes, because when it happens like this, it’s ‘Wow, it’s amazing!’ But at the same time when you think about the work he did, then you know it wasn’t surprising. When you think about his win over [Stan] Wawrinka at Wimbledon [in 2017], Daniil was 70 in the world. It meant he could do crazy things, so no I’m not surprised about last year. He is the pilot now, driving to improve different areas.” 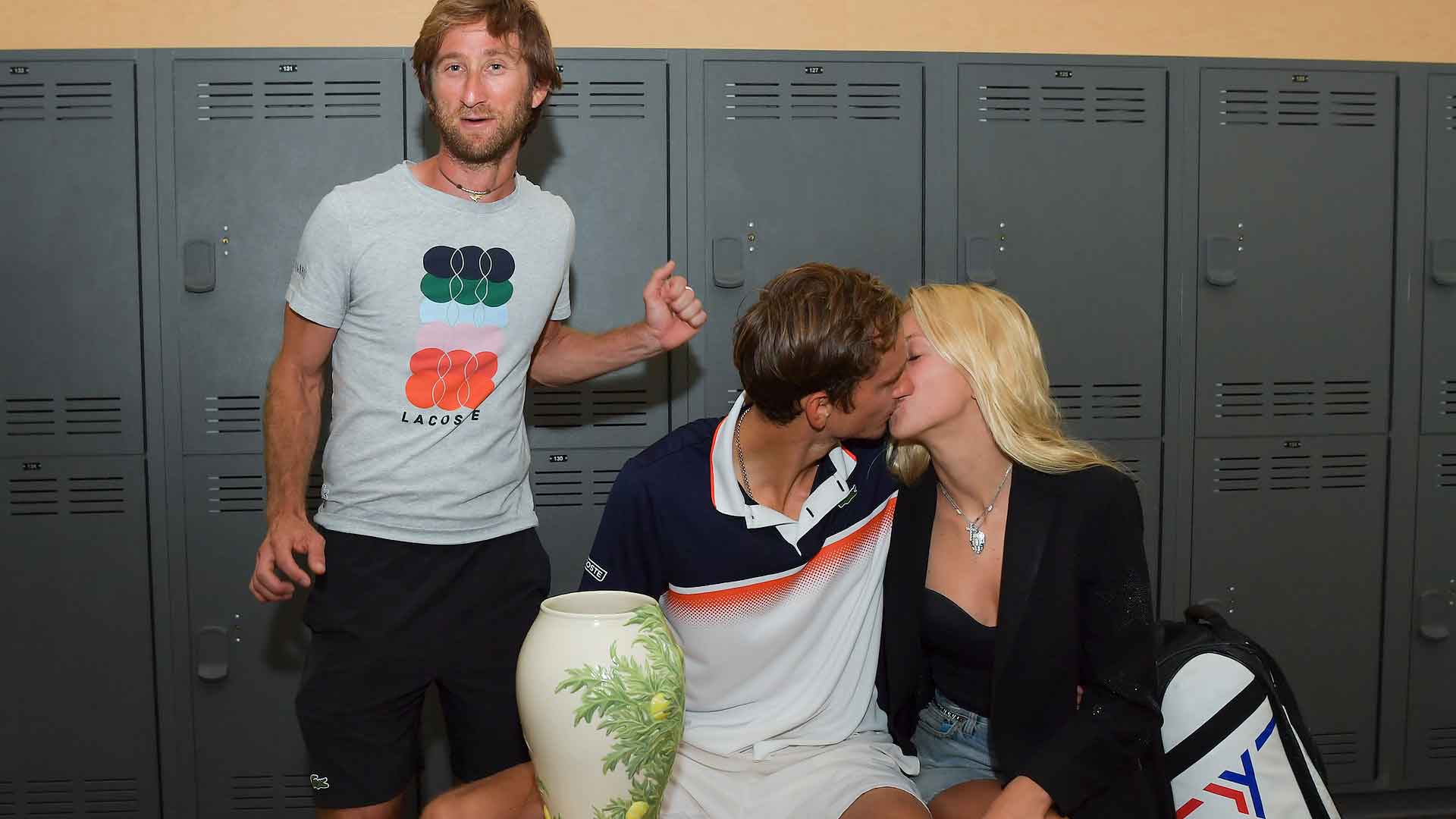 The 24-year-old Medvedev has started 2020 with an 8-4 record, including four straight wins at the start of the season when he helped Russia to the ATP Cup semi-finals. Cervara doesn’t believe Medvedev is “under pressure [to defend 2019 FedEx ATP Rankings points], because he tries to do his best and win every match.” He won’t be changing anything up any time soon in their pre-match preparations. “I try to get Daniil mentally sound, the best feeling he can be,” said the French coach. “Sometimes we don’t work a lot with the ball, but we do the main things he likes to do. I try and fix one or two small things between matches in our one-hour training sessions, or work on different things if Daniil is receptive to it. Sometimes you do things that turn out to be useless, and sometimes useless things that are beneficial. It’s about feeling. I want him to feel good, putting in exercises he likes to do as it’s something we have done a lot.”

Safin, who finished his playing career in 2009, reflected on the state of Medvedev’s game at the ATP Cup, saying, “The first year, when you start and you do well, it's a little bit easier than the second year. Because in the second year everybody starts to know you, starts to learn about you, and they try to change a tactic against you. He was a newcomer last year. So, this year, I think he's working on a few new things to improve — it's like a telephone. You have to upgrade each year, every time. The way that Daniil is thinking it, I think he will be dangerous this year. He's very pumped up… Daniil is getting more and more stronger in the head. He's a big fighter. He's very smart, which is good. He reads the game very well. It's easier for him to adapt to other players. He plays very good in important moments, in important matches, like we saw against Rafa [Nadal] in finals of the [2019] US Open.”

So after travelling to so many tournaments together, have player and coach become friends? “It’s tough to define what sort of relationship we have," says Cervara. "In one way we can say friends, but it’s tough to use that word from my side. We have a very good connection, it’s not about talking, it’s sometimes just a look to convey energy and emotion. Things that worry me, don't worry him and vice versa. I work on my coaching to develop my skills, as Daniil does with his tennis. Both are different approaches to the sport, but we have a good bond and one goal. I want him to realise his potential and have the best career he can.” 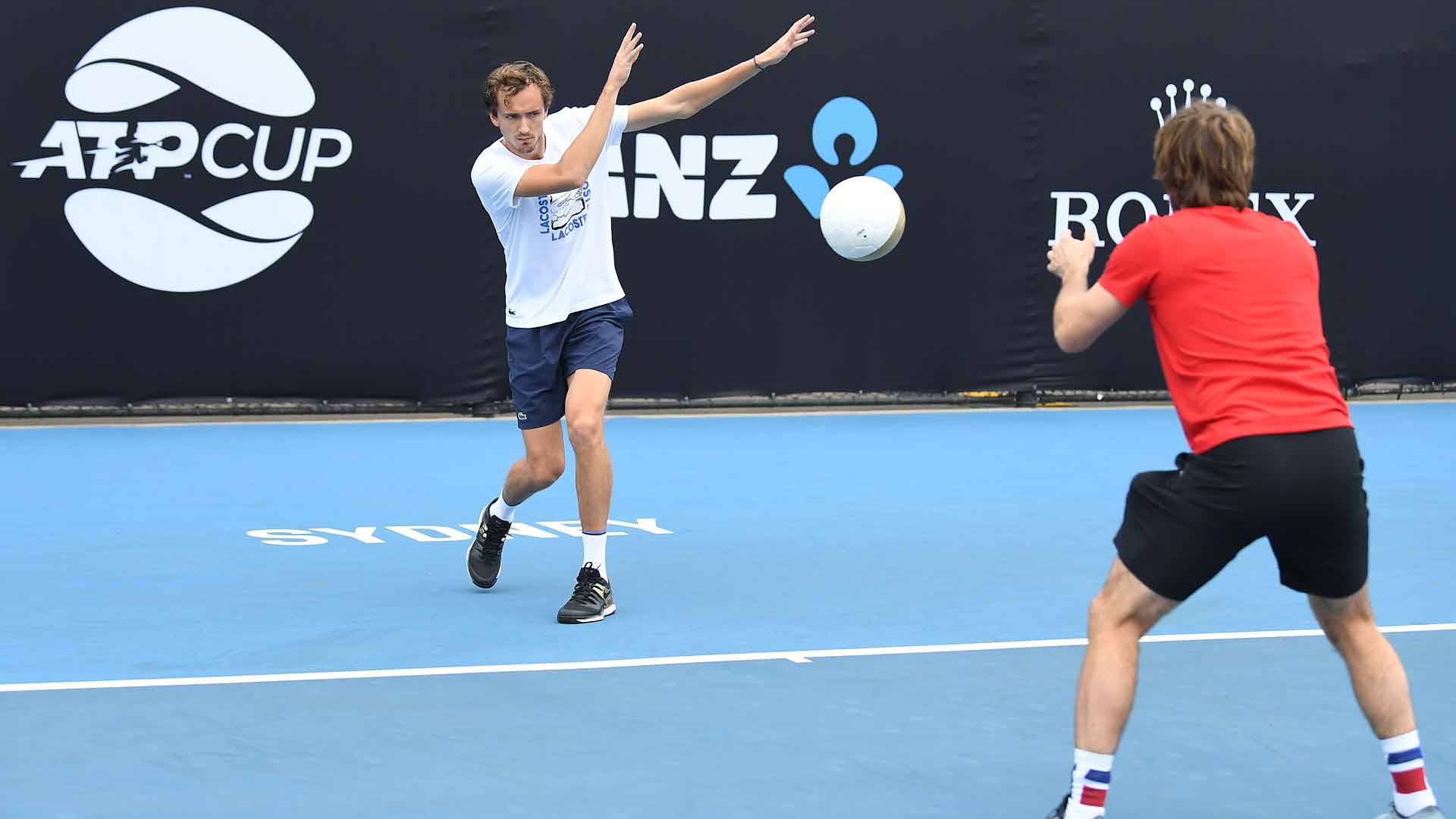