Stan Wawrinka had no problem with the heavy conditions Sunday, going unbroken in his first-round match against Andy Murray at Roland Garros.

The Great Equaliser At Roland Garros: The Weather

ATP Staff
This article contains:
Learn how players are adjusting in Paris

With Roland Garros beginning in late September instead of May due to the COVID-19 pandemic, there are inevitable differences at the tournament this year, one of them being the weather.

In the cold and wet Paris conditions — it was less than 60 degrees Fahrenheit on Sunday — players are doing their best to put themselves in the best position to play well on court. Alexander Zverev, competing in his first tournament since making the US Open final on hard courts, has adjusted his equipment for the cooler clay.

“I'm stringing three kilos less than I did in New York,” Zverev said, referencing his racquet’s string tension. “That's quite a lot.”

That is nearly a seven-pound difference in tension, making the stringbed looser to create a “trampoline effect”. The looser a racquet’s strings, the more power a player gets. The tighter the stringbed, the more control and spin a player has. 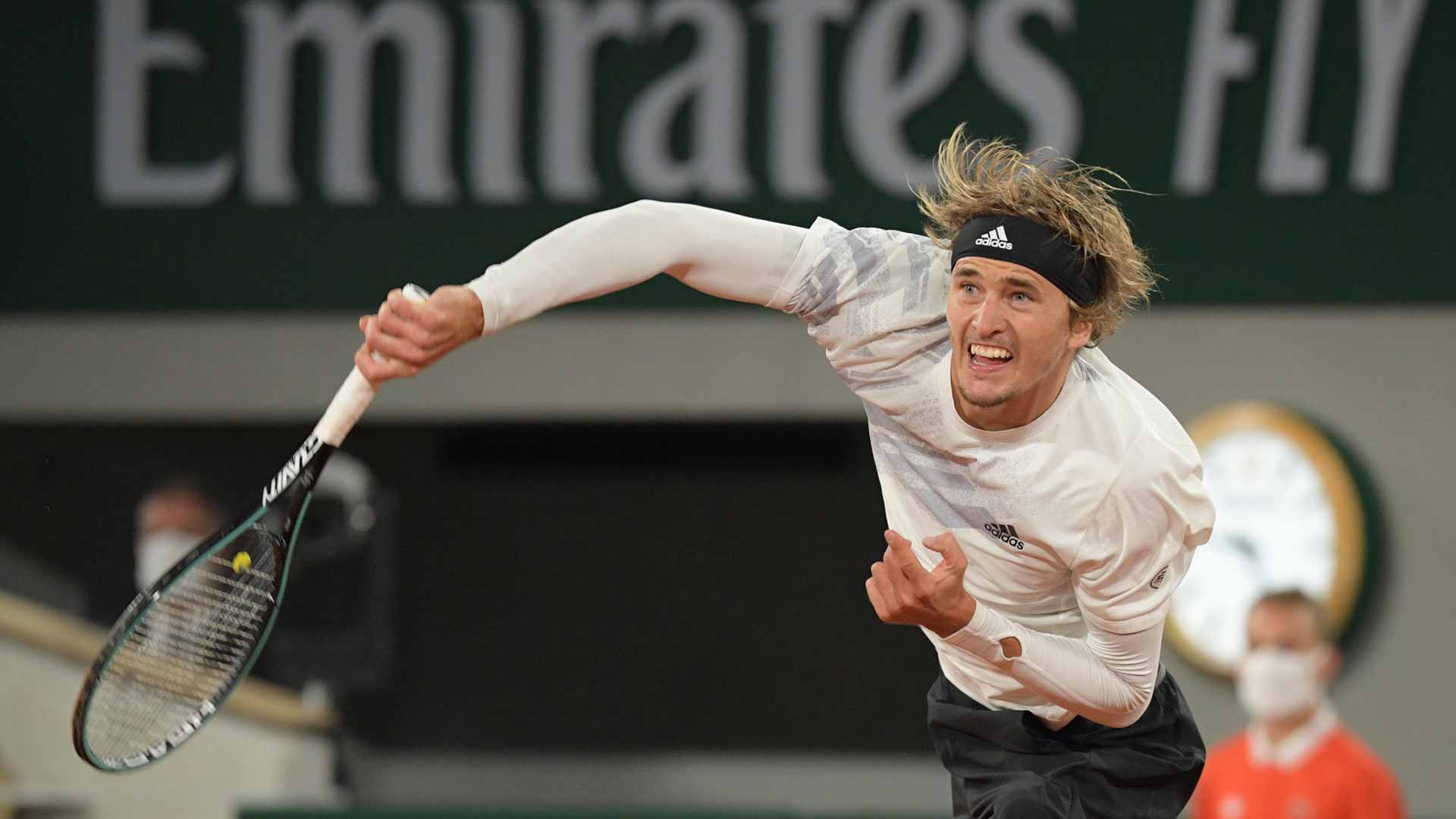 Alexander Zverev wore a long-sleeve shirt under his match kit on Sunday. Photo Credit: Peter Staples/ATP Tour
The German, who defeated Austrian Dennis Novak in straight sets, is not the only one stringing looser. Big-serving American John Isner strung his racquets between 38 and 39 pounds at the US Open. He has dropped that range to between 29 and 32 pounds in Paris. The heavier conditions at Roland Garros might seem detrimental to the 21st seed’s powerful game, but Isner said that’s not necessarily the case.

“With how the clay is now, I think it almost helps me in the sense that the really good movers can't really slide around like they normally can because the clay is really damp. It kind of played like a slow hard court,” said Isner, who beat home favourite Elliot Benchetrit. “There wasn't much sliding. I'm not the best slider. It's tough conditions. I really don't mind it.”

There are also players who are able to adapt their game to the heavier conditions. Stan Wawrinka, the 2015 champion, had no problems hitting through the court in his straight-sets triumph against former World No. 1 Andy Murray. His strength allowed him to power through regardless. After the match, Wawrinka put on a sweatshirt for his on-court interview. The Swiss was one of many players to wear a shirt under his match kit, while Murray wore leggings.

“For sure it's tough conditions here. Heavy, slow, cold, completely different than normally at that time of the year. But again, I think I’m playing well,” Wawrinka said later on in his press conference. “Happy [that in] those conditions I can still play heavy with my game from both sides. So I use those tough conditions, heavy conditions, slow conditions to still play powerful tennis.” 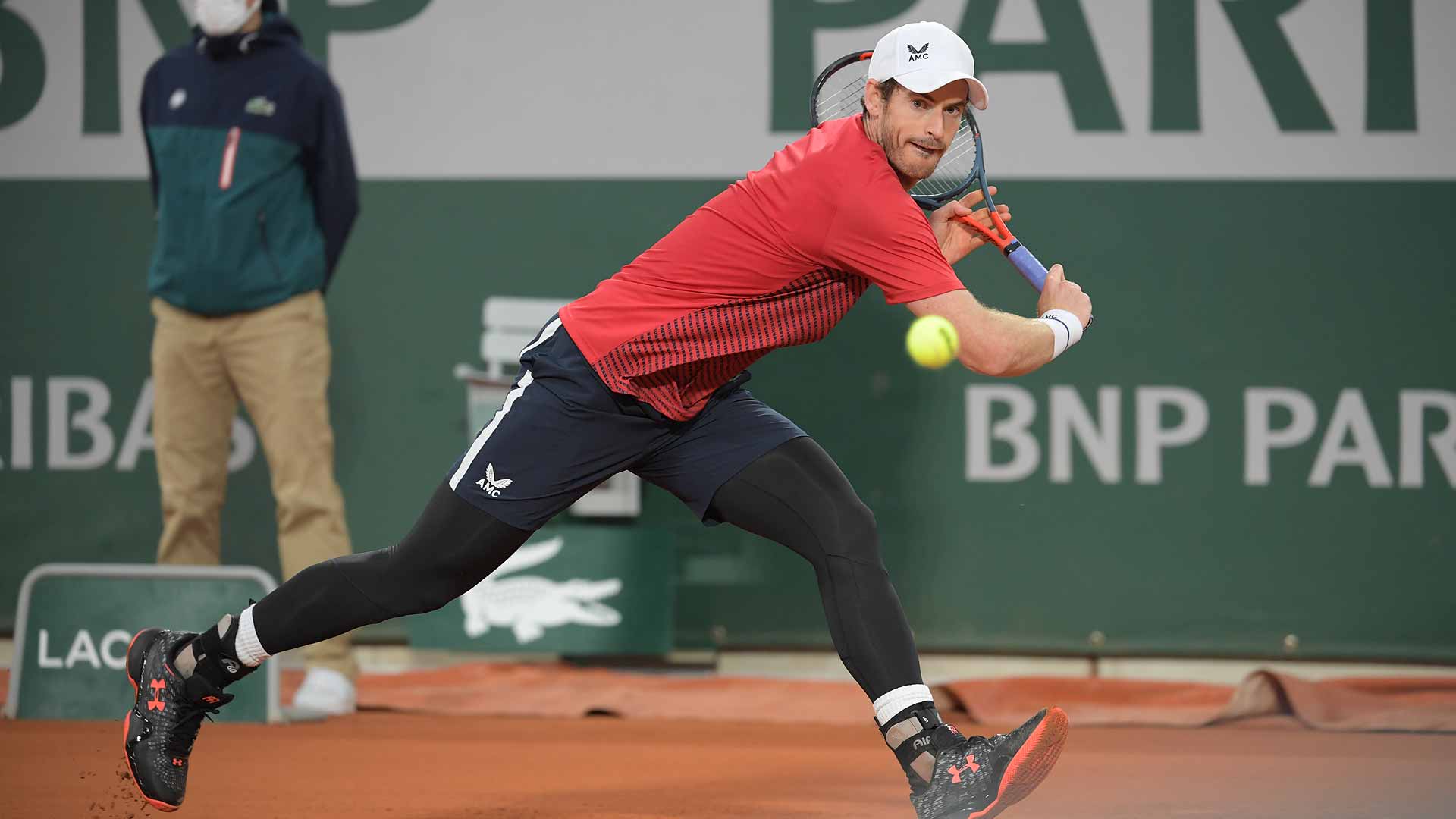 Andy Murray sported leggings to stay warm during his first-round loss in Paris. Photo Credit: Peter Staples/ATP Tour
Another effect the current weather has is reducing how much the ball bounces off the surface. Some players hit with heavy topspin to force opponents to hit the ball higher than their typical strike zone. But according to former World No. 4 Kei Nishikori, who beat 32nd seed Daniel Evans, the ball is not shooting off the court like it normally does.

“For my tennis, I think it's better balls are flying because I like to play quicker, finish the point a little bit quicker than other guys. But for sure there’s less bounce. Especially today it didn't bounce,” said Nishikori, who noted how that low bounce helped Evans’ slice backhand. “[It was] almost half bounces [compared to] playing in the summer… maybe you want a little more power when you’re playing in heavy conditions.”

Diego Schwartzman played in similar conditions in an evening match at last week’s Internazionali BNL d’Italia against Rafael Nadal, upsetting the Spaniard in Rome. The

“For me, playing at night, similar to Rome under the rain, under the lights, [it] was similar to last week, so I felt great on court today,” said Schwartzman, who cruised past Kitzbuhel champion Miomir Kecmanovic. “For me, the conditions today were really, really good.”

Regardless of who enjoys the conditions and who doesn’t, all players have to deal with the same circumstances. Many who competed Sunday echoed the same sentiment: they simply need to make the most of it.

Schwartzman said: “We have to adapt to these conditions and try to do our best.”