Grigor Dimitrov caused a big upset on Sunday by sweeping past last year’s finalist Dominic Thiem for a place in his fourth Australian Open quarter-final.

Dimitrov, the No. 18 seed, played with great athleticism to beat third seed Thiem, who was noticeably low on energy, 6-4, 6-4, 6-0 in just over two hours on Rod Laver Arena.

“I think the key was that I was able to keep a consistency throughout the whole match,” said Dimitrov. “I was playing well. He was up a break in both [the first and second] sets. It was 3-1, 40/15 in the first set. I could have easily slipped that set."

The Bulgarian will next play World No. 114 and Russian qualifier Aslan Karatsev, who recovered from two-sets-to-love down to beat Felix Auger-Aliassime earlier on Sunday. Dimitrov will be contesting his sixth Grand Slam championship quarter-final.

“I will treat this match no differently,” said Dimitrov, looking ahead to playing Karatsev on Tuesday. “I will still go through my routines. I'm still going to do my work. It's just honestly another match. I'm not going to think of what the guy has done, what he has accomplished or what is going on. Clearly, in order for him to be here, he's done something right, and he's playing great tennis right now. Of course, he's a dangerous player.” 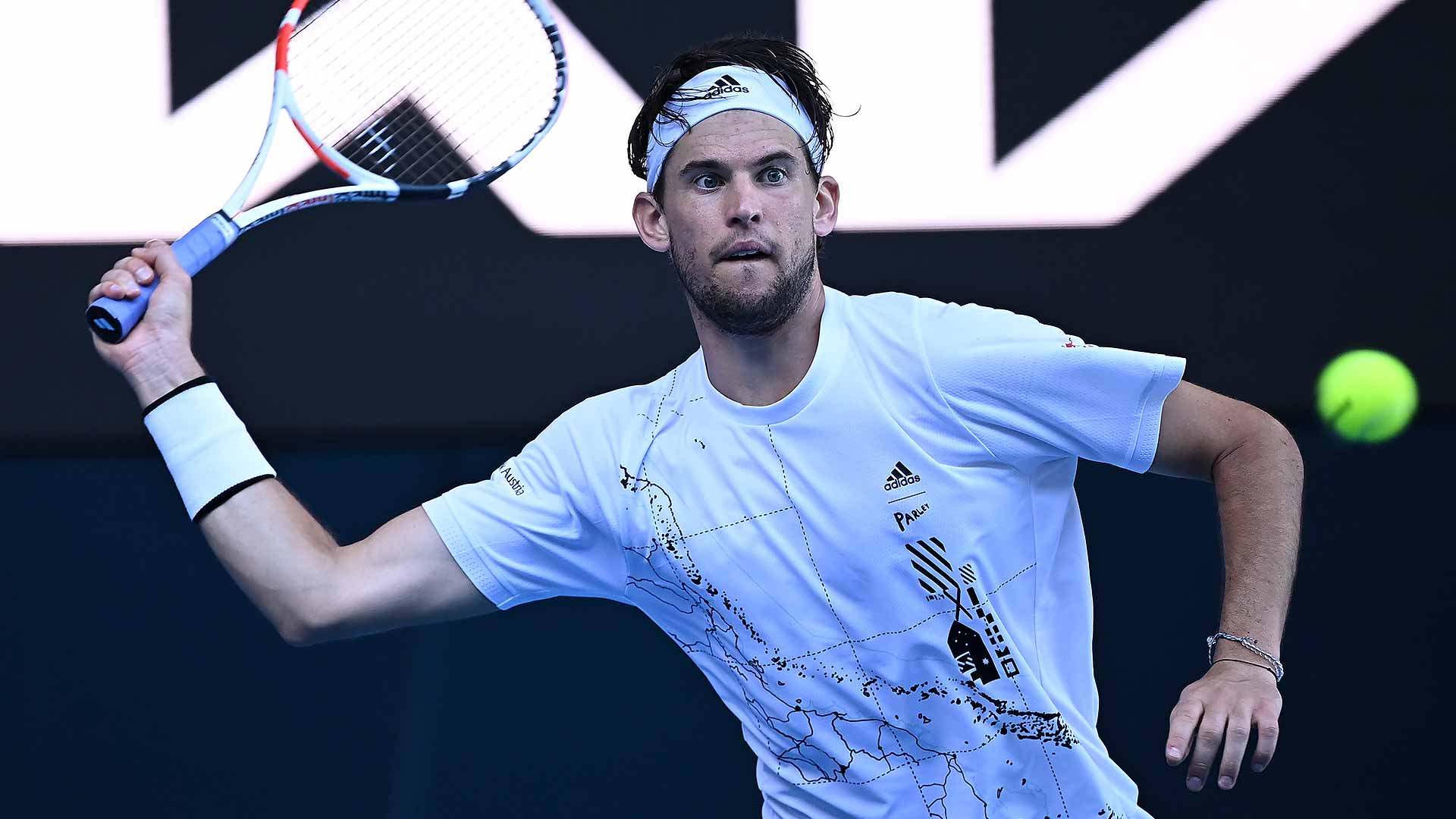 Thiem had six game points for a 4-1 lead in the first set, but let Dimitrov back in. As Thiem’s unforced error count increased, Dimitrov won five straight games. Thiem struck a backhand return long off a deep second serve on Dimitrov’s first set point to end the 57-minute set.

When Thiem put together consecutive forehands to break for a 3-1 lead in the second set, the physical fatigue caused by coming back from two-sets-to-love down against Nick Kyrgios on Friday seemed to evaporate. But Dimitrov rallied immediately, breaking in the fifth and ninth games of the second set, prior to closing out to love at 5-4.

The third set was one-way traffic, once Thiem started to serve and volley to lose the first game. The Austrian won just five points in the 21-minute set, which ended with Dimitrov hitting a forehand that Thiem returned long.

“I think a combination of [a few] things, some little physical issues, plus a real bad day, plus the fact that he's a great player,” said Thiem. “If he's on, he's super tough to play, especially in faster conditions than now, and I really wish that he can make a great breakthrough at a Grand Slam. He would definitely deserve it.”

The 29-year-old Dimitrov hit 25 winners, including 10 aces, while Thiem committed 41 unforced errors and won just nine of 28 points on his second serve.

Thiem, who came back from two-sets-to-love down for the fourth time in his career with victory over Kyrgios in the third round, is now 4-2 on the 2021 season. The 27-year-old led Austria at the ATP Cup, prior to the start of the Australian Open.