Carlos Alcaraz made it consecutive victories over ATP Tour legends at the Mutua Madrid Open on Saturday afternoon as the 19-year-old Spaniard clinched a stirring 6-7(5), 7-5, 7-6(5) win over Novak Djokovic at the ATP Masters 1000 event.

The Spanish sensation backed up his win over Rafael Nadal in Friday’s quarter-finals in spectacular style on Manolo Santana Stadium, recovering from the disappointment of losing a first-set tie-break to complete the biggest win of his career by Pepperstone ATP Ranking against World No. 1 Djokovic.

Alcaraz’s outstanding 2022 season has seen the Spaniard win a maiden Masters 1000 title in Miami and break the Top 10 of the Pepperstone ATP Rankings for the first time. Defeating Nadal and Djokovic back-to-back in Madrid extends his winning streak over Top 10 opponents to six, an indication that the 19-year-old possesses the level to consistently match the very best on Tour.

“This gives me a lot of confidence to play the final tomorrow," said Alcaraz, whose run in Madrid this week has lifted him three places to No. 6 in the Pepperstone ATP Live Rankings. "I know that I played a really good game, and for the rest of the season I think I am able to play against the best players in the world and beat them as well, so it gives me a lot of confidence.”

Alcaraz struck 51 winners to Djokovic's 24 as his aggressive style and consistent use of drop shots caused Djokovic constant problems in the pair's maiden ATP Head2Head meeting. Alcaraz also proved steely under pressure in saving five of six break points he faced, with Djokovic saving eight out of 10 as both players frequently found big serves to dig themselves out of trouble.

The win makes the Spaniard the first player ever to beat Nadal and Djokovic at the same clay-court event and moves him to a 27-3 match record for the season. This ties him with Stefanos Tsitsipas for most tour-level wins in 2022, although the Greek can move ahead with victory in his semi-final against Alexander Zverev on Saturday night.

As he did against Nadal in Friday’s quarter-finals, Alcaraz made a fast start at the Caja Magica. He pinned Djokovic to the back of the court with a barrage of bruising forehands and found an angled backhand pass to break in the opening game to the delight of his passionate home support.

Djokovic’s response was emphatic. From 40/15 in the third game, Djokovic won 21 successive points on serve and reclaimed the break in the eighth game. He carried that momentum into the first-set tie-break, opening up a 5/1 lead that proved unassailable.

An intriguing second set that featured few long rallies also seemed destined for a tie-break before Alcaraz produced a sublime return game at 6-5 to break and force a decider. The Spaniard’s drop shot grew increasingly effective as he frequently drew Djokovic forward, a tactic that took Alcaraz level as he angled a perfectly placed winner past the Serb on set point.

Alcaraz continued to look the more dangerous player into the deciding set, with Djokovic fending off break points breaks in three of his service games. The Spaniard let a match point slip at 5-5 as Djokovic’s trusty delivery continued to fire at big moments, but Alcaraz was not to be denied in the tie-break as he held firm for a statement win.

The Spaniard’s outstanding Conversion and Steal scores reflect his proficiency in winning points regardless of whether he was on the front or back foot. Alcaraz won 72 per cent of points from an offensive position and 41 per cent of points from defensive ones, clearly outscoring Djokovic in both departments (Learn more about Conversion and Steal scores). 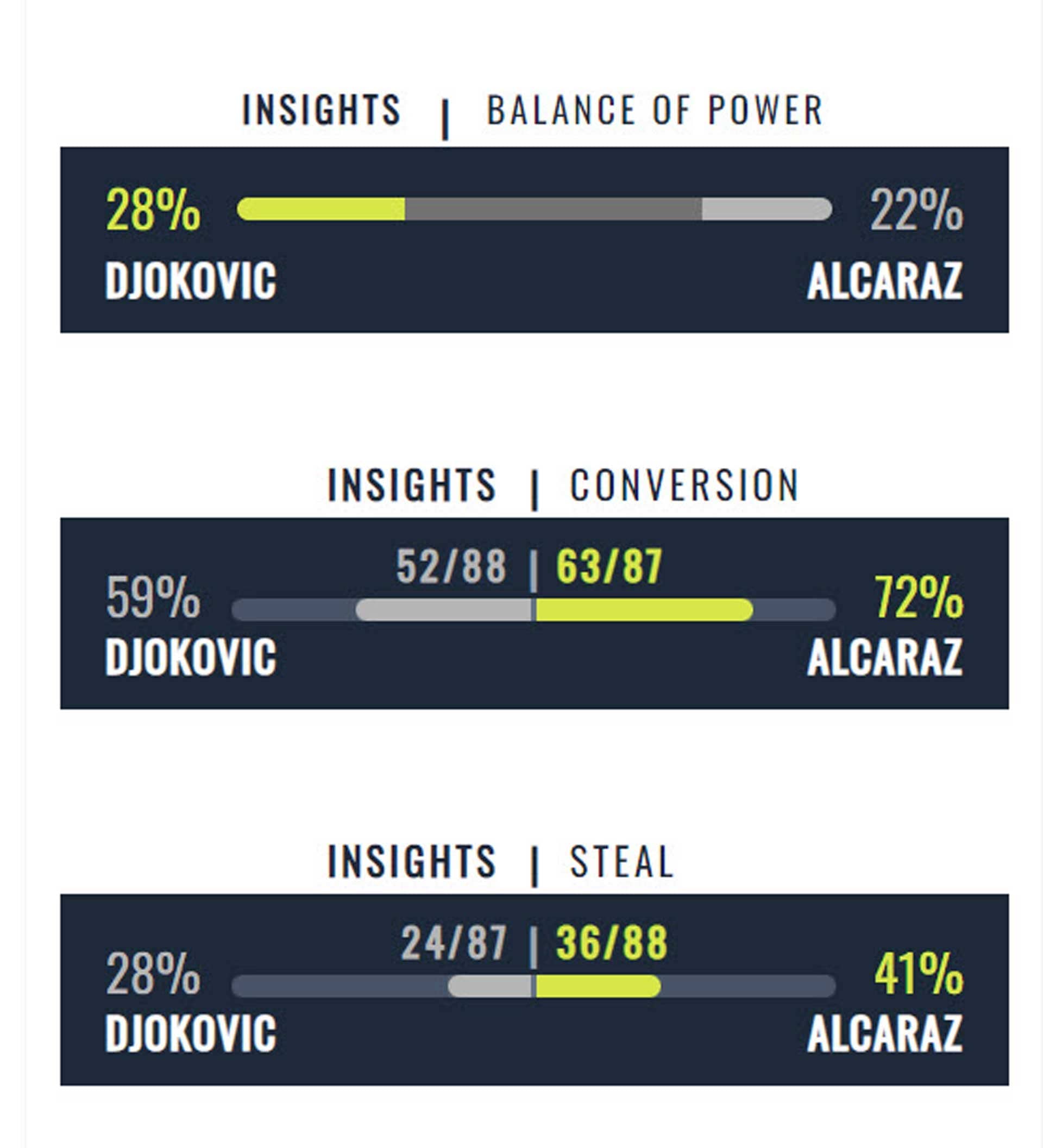 The semi-final victory takes Alcaraz within one win of a second Masters 1000 crown of the year. The Spaniard now looks forward to Sunday’s championship match against fourth seed Tsitsipas or defending champion Zverev.

“I just try to make results, to [play] a good game in every tournament to still be there with the best in the world," said Alcaraz. "Tomorrow I will go for it in the final as I did in Miami, and I’m really happy to be able to play a second Masters 1000 final.”