After triumphing for the first time in Cincinnati, Novak Djokovic has now won all nine ATP World Tour Masters 1000 events, the Nitto ATP Finals and all four Grand Slams.

There are many words that could describe what Novak Djokovic did on Sunday when he captured his first Western & Southern Open title, but one stands out: historic.

Djokovic completed the Career Golden Masters, becoming the first player to win all nine ATP World Tour Masters 1000 events. The Serbian has now accomplished virtually everything a tennis player can in their career, reaching the peak of the ATP Rankings, triumphing at the Nitto ATP Finals, winning all four Grand Slams and now capturing each of the Masters 1000 trophies.

"I say that’s pretty darn impressive," Patrick McEnroe, an ESPN analyst who won 16 tour-level doubles titles, told ATPWorldTour.com. "In addition to all the majors, he’s won quite a few of the Masters [1000] events multiple times... there’s no doubt that Novak has turned the corner to where he’s back being one of the favourites in every tournament he plays basically at this point."

You May Also Like: Nine To Shine: Djokovic Claims Historic Cincy Crown

History. That’s what Djokovic made in Cincinnati. He has proven his ability to thrive under the greatest pressure and shown his versatility by adjusting to every surface and all conditions. Even 98-time tour-level titlist Roger Federer, who owns more 'Big Titles' than anybody, made it a point to commend the Serbian for his efforts in completing the Career Golden Masters.

“It's just something that the previous generation couldn't even aim for,” Federer said after Sunday’s Cincinnati final. “It wasn't like a goal of anybody, because you had so many experts on all different surfaces. And then all of a sudden things slow down. Everybody starts to play from the baseline. Only then you could win all four [Grand Slams] almost or you could only win all the Masters 1000s.”

McEnroe points out that while there will always be pressure to perform at the Grand Slams, there are various difficulties at the Masters 1000 level. For example, he says that the conditions and court speeds at the nine events are different, making each challenge unique.

"I’m not sure I can say that one’s more difficult than the other. They’re all really difficult. Obviously you’ve got multiple surfaces for all of them," McEnroe said of majors and Masters 1000s. "I think in some ways, oftentimes winning a Masters [1000] event can be more difficult just because you play six matches in seven days a lot of the time and you’re playing, normally, more higher-ranked players every round than in the majors." 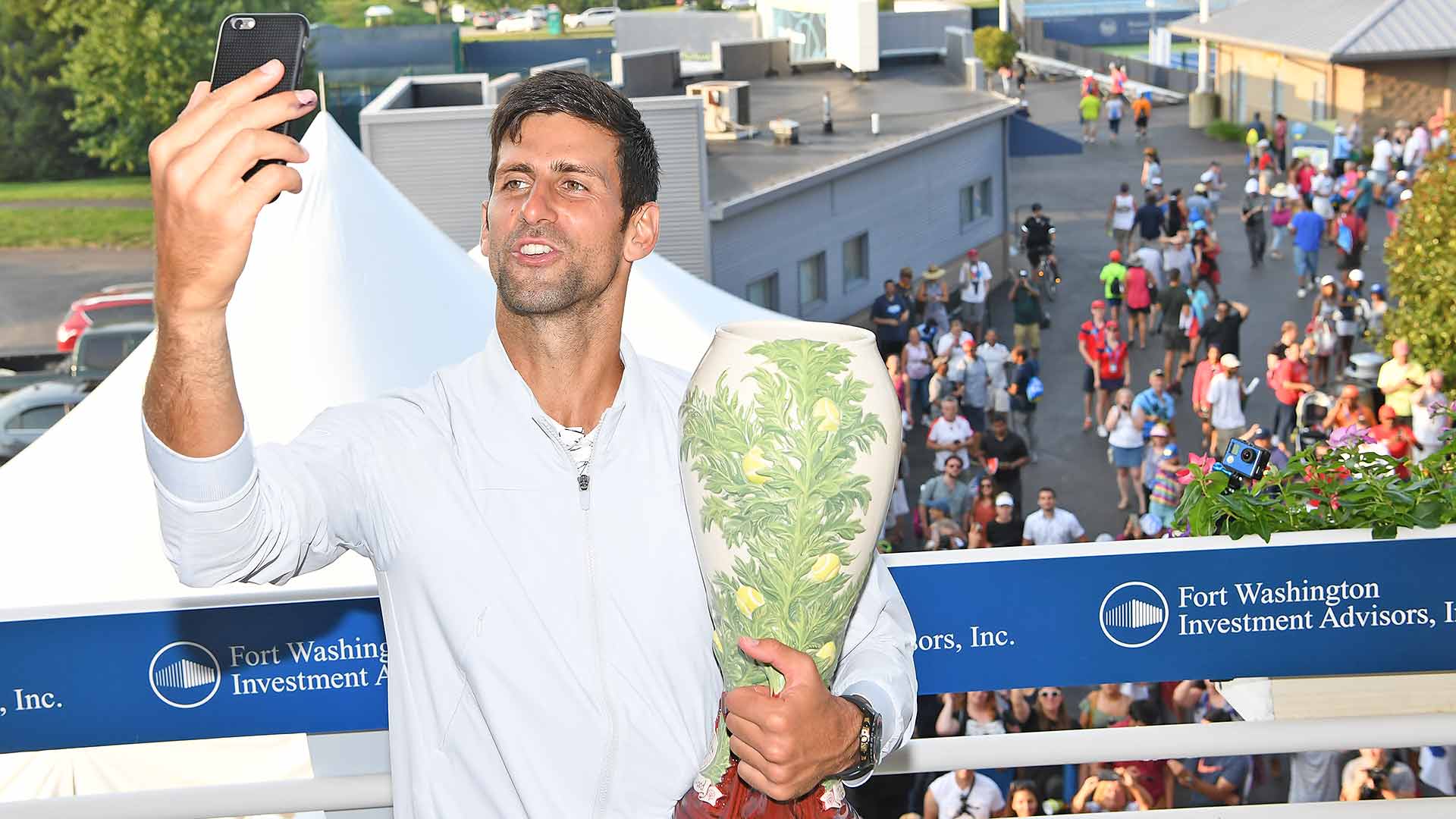 But Djokovic has not just proven his ability to win at the biggest tournaments in the sport. The 31-year-old has shown that he rises to the occasion with the most on the line. With his Cincinnati victory, Djokovic has now won 49 ‘Big Titles’ (Grand Slams, Nitto ATP Finals, Masters 1000s), moving him to within one of Rafael Nadal, who has 50, and three of Federer, who owns 53.

But Djokovic stands out from the two legends. He has won a higher ratio of ‘Big Titles’ to tour-level titles than anyone else. Seventy per cent (49/70) of the Serbian’s victories have come at the sport’s highest levels. Nadal is second among the Big Three, capturing 62.5 per cent (50/80) of his championships at ‘Big Title’ tournaments, and Federer is third at 54.1 per cent (53/98).

"It shows you about his focus and his determination, that he’s obviously a big match player and he gears himself up for the biggest tournaments," McEnroe said. "Novak’s got the kind of game that he doesn’t have to vary it as much as even the other two guys on different surfaces. He pretty much plays the same kind of game on every surface with very subtle adjustments, whereas Rafa, you see him making pretty big adjustments from clay to grass with his return position, and Roger makes some adjustments as well with where he stands on the return and how much spin he plays with. But Novak essentially plays the same kind of game on every surface, which is obviously difficult and impressive that he could do that." 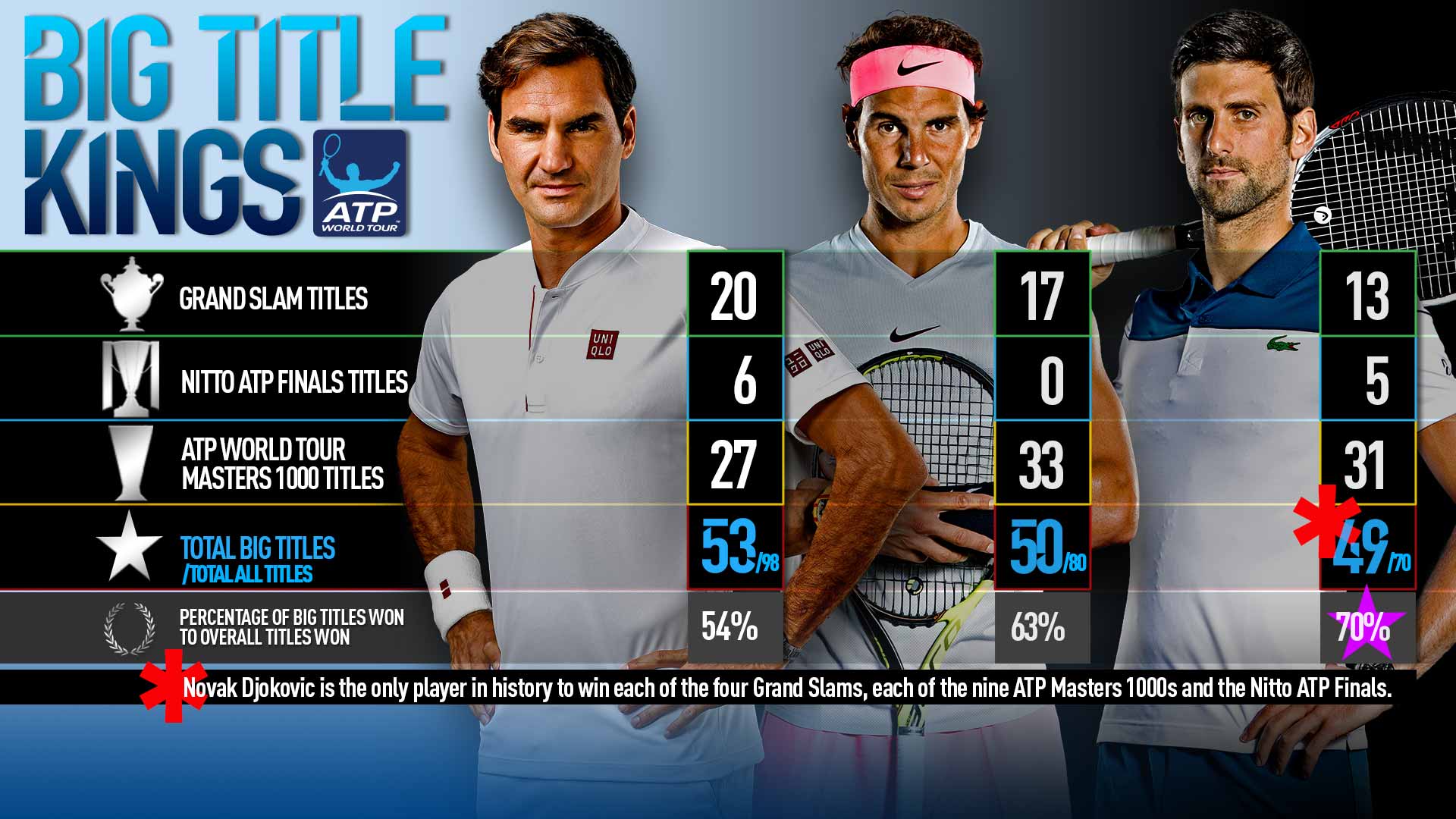