Novak Djokovic will face Aslan Karatsev for a place in the Australian Open final.

Djokovic: ‘Things Are Going In The Right Direction'

World No. 1 to face Karatsev in semi-finals

After reaching his ninth Australian Open semi-final with a four-set win over Alexander Zverev on Tuesday, Novak Djokovic shared an optimistic update on the abdominal injury he suffered in his third-round clash with Taylor Fritz.

Last Friday, the 33-year-old’s bid to join Rafael Nadal as only the second man to win nine or more titles at a single Grand Slam event was almost ended in the first week of the tournament. Djokovic sustained an abdominal injury during the third set of his third ATP Head2Head encounter against Fritz, but he took risks on his serve and claimed two late breaks in a deciding set to advance to the Round of 16.

Since then, Djokovic has skipped practice sessions and defeated Milos Raonic and Zverev in four-set battles to move two wins away from a record-extending ninth title in Melbourne. Four days on from his five-set win against Fritz, Djokovic told reporters that his abdomen issue appears to be improving.

“The positive thing is that I actually felt the best today — from the beginning of the second set until the end of the match — that I have since the third round against Fritz when the injury happened,” said Djokoic. “It means that this is going in the right direction, and fingers crossed that in two days it will stay the same.” 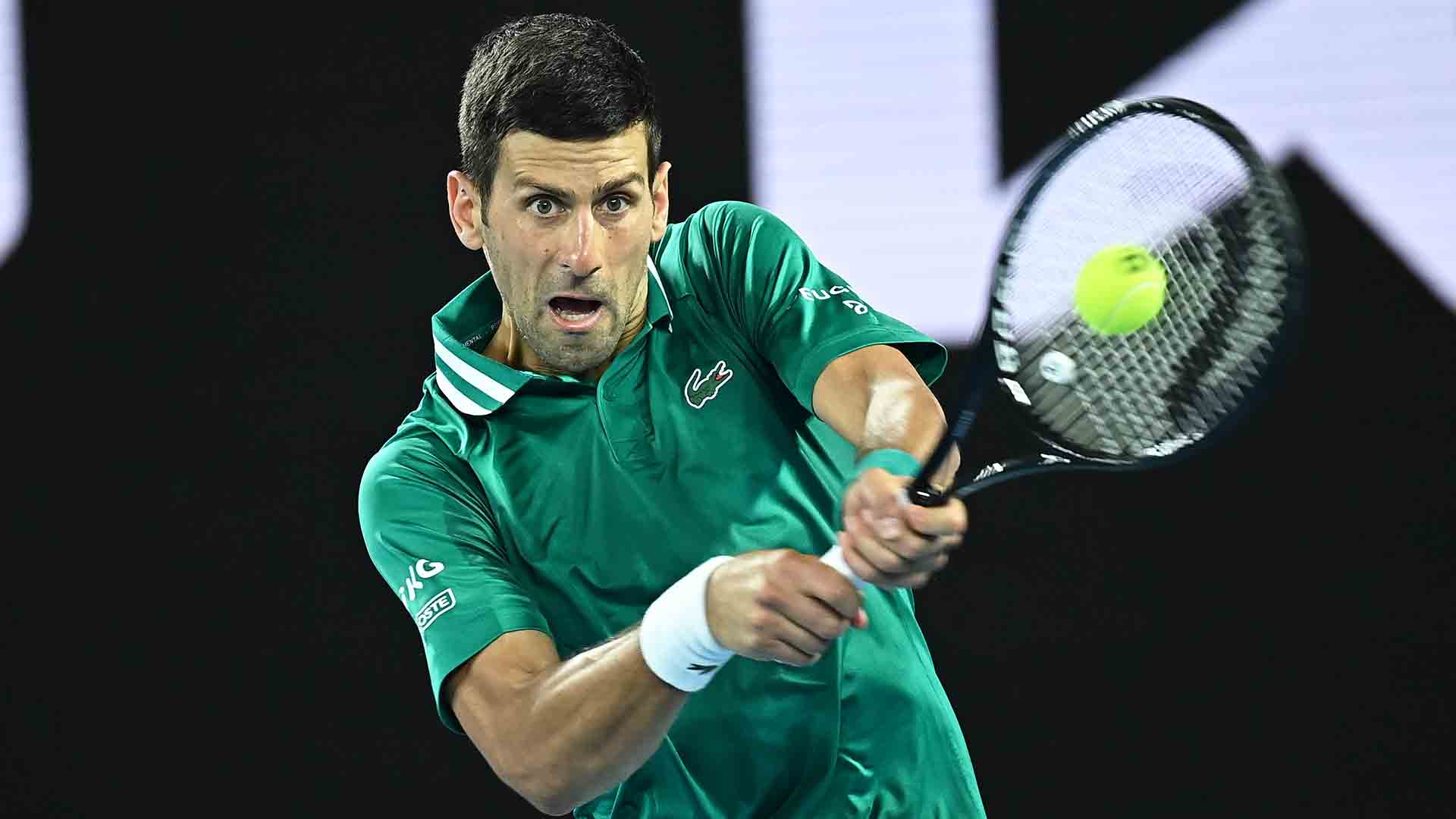 Djokovic’s reward for his win against Zverev is a place in the Australian Open semi-finals. The World No. 1 is no stranger to competing in the latter stages of the tournament at Melbourne Park, but he will face a new challenge when he steps onto Rod Laver Arena for his next match.

Djokovic will be facing Grand Slam debutant Aslan Karatsev for a place in the championship match in Melbourne. Like many tennis fans, Djokovic watched the Russian qualifier for the first time at this tournament.

“I had not seen him play, honestly, before [the] Australian Open,” said Djokovic. “I have seen him play during the tournament here, and he impressed me, [he] impressed a lot of people. His movement, his firepower from baseline. [He has a] flat backhand, [he is straight from the] Russian school [with a] great backhand. [He] also hits some good forehands [and] dictates the play. He is impressive. [He was] two sets down against Felix [and] came back. He was just very solid against Grigor… He's there for a reason, and I congratulate him for [his] great success.”

While Djokovic chases 20-time Grand Slam titlists Roger Federer and Rafael Nadal in the history books, Karatsev has already made history in Melbourne. The Russian is the first player from his country to reach the semi-finals at the Australian Open since 2005 champion Marat Safin.

Karatsev will enter his first match against Djokovic as the underdog, but that has been the case throughout this event. In his last three matches, the 27-year-old has beaten eighth seed Diego Schwartzman, No. 20 seed Felix Auger-Aliassime and No. 18 seed Grigor Dimitrov.

“It's his first semi-final [at a] Grand Slam, so obviously for him it's [the] biggest success he has had so far,” said Djokovic. “He doesn't have anything to lose, really. He's motivated. I expect him to come out and really go for his shots and try his best and try to take that win.”

You May Also Like: World No. 114 Karatsev's Historic Run Continues Into Australian Open SFs

Karatsev will not be the only player trying to achieve something for the first time. Djokovic is attempting to win a Grand Slam without practising on his days off, a tactic which has aided his abdominal recovery in recent days.

Djokovic has had to compromise at this year’s tournament. By not practising, he is missing out on the opportunity to sharpen his skills for his next match. But, in his current condition, recovery is taking priority over practice.

“I don't feel like I need to practise in terms of getting half an hour or an hour on the court because I need to work on something,” said Djokovic. “I have had enough tennis… Right now, the priority is recovery. The more time I have to recover and not exert too much energy and not make any quick moves, the better it is for me.”