ATP Staff
This article contains:
The World No. 1 reflects on his ninth Australian Open title

Not even a muscle tear was able to stop Novak Djokovic at the Australian Open.

The World No. 1 confirmed for the first time after lifting his ninth trophy at Melbourne Park on Sunday that he tore an abdominal oblique muscle during his third-round victory against Taylor Fritz. The Serbian persevered to claim his 18th Grand Slam title.

“I was quite worried. [It] did not look realistic that I could actually play. I didn't know until two hours before the fourth-round match. That's when I stepped on the court and played for the first time since the third round,” Djokovic said. “The pain was at the level that was bearable for me. I just accepted the fact that I'm going to have to play with the pain.”

It’s difficult enough to win a major without an injury. But Djokovic defeated two former World No. 3s — Milos Raonic and Alexander Zverev — halted Aslan Karatsev’s dream run and then defeated the hottest player on the planet, Daniil Medvedev, who was on a 20-match winning streak, in the final. Just nine days ago, after tearing the muscle during a five-set victory against Taylor Fritz, Djokovic wasn't sure he would take the court in the Round of 16.

“Of course, I haven't done it myself. [The] medical team, my physio, [they] have done tremendous work. With God's grace, I managed to achieve what I achieved and I'm very thankful.” 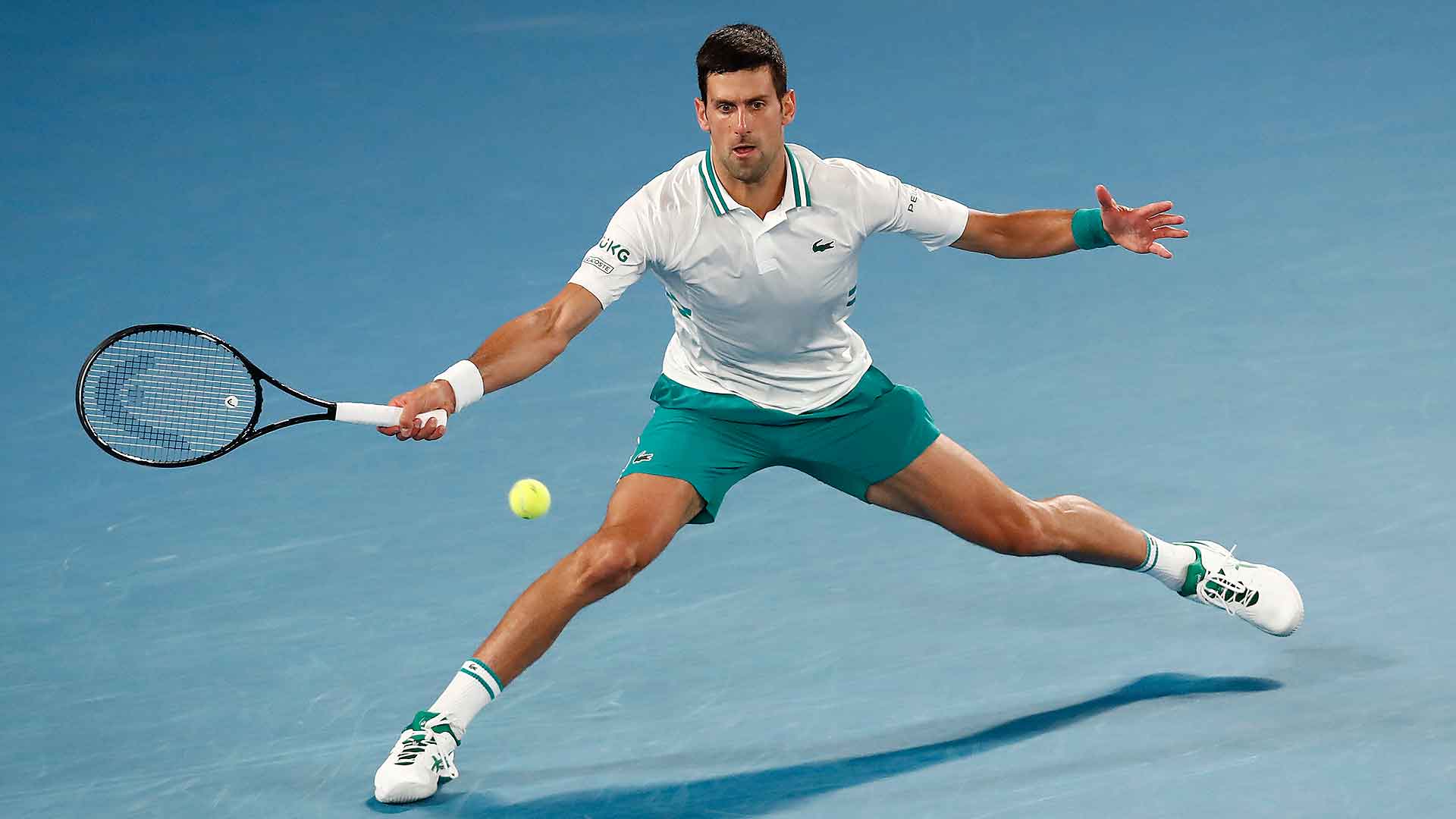 Many marvel at Djokovic’s Gumby-like movement. The Serbian contorts his body in unthinkable ways on the court, making his body look like a human slinky toy. Moving like that is jaw-dropping under normal circumstances, forget doing so with an abdominal injury.

The serve heavily relies on a player’s core, yet Djokovic hit 23 aces in a four-set quarter-final victory against Zverev. Before striking 26 aces in the second round, Djokovic’s career-high was 23. Pushing through the pain is one thing, but maintaining a level fit for the World No. 1 is another.

Djokovic only lost two sets from the fourth round on against a slew of difficult opponents. That would have been impressive any year, but under the circumstances the 33-year-old's effort was superhuman.

“I know there's been a lot of speculations, people questioning whether I'm injured, how I can recover so quickly, it's impossible to do that. I get it. Look, everyone is entitled [to] their own opinion,” Djokovic said. “What we have done in the past nine, 10 days, you'll get a chance to see in details probably [at the] end of this year when the documentary [we are making] comes out. I've been filming a lot of things that I've been doing here, but also in the previous six months.”

The Serbian is the second male player in history to win nine titles at a single Grand Slam championship, joining Rafael Nadal, who has triumphed at Roland Garros 13 times. The World No. 1 is now within two major titles of Roger Federer and Nadal’s record 20.

“Roger and Rafa inspire me. That's something that I've said before, I'll say it again. I think as long as they go, I'll go,” Djokovic said. “In a way it's like a race [of] who plays tennis more, I guess, and who wins more. It's a competition between us in all areas. But I think that's the very reason why we are who we are, because we do drive each other, we motivate each other, we push each other to the limit.”

As a kid, Djokovic dreamt of winning Wimbledon and reaching No. 1 in the FedEx ATP Rankings. Although the Serbian has done both and much more, he does not take his success for granted.

“Of course I tried to remind myself, pinch myself, of how important this is. Even though I have been fortunate to win many majors and play in many major finals in my life, I do enjoy the success every single time even more because I know that the longer the time passes, the more difficult it's going to become for me to get my hands on the major trophy,” Djokovic said. “You have, of course, new young players coming up that are as hungry as you, maybe even hungrier, and they're coming up and they're challenging me and Roger and Rafa.”

Djokovic has long spoken about how important is is to make tennis history. On 8 March, he will surpass Federer for most weeks as World No. 1 with 311. The Serbian will then turn his attention to chasing down his great rivals’ Grand Slam titles record.

“Whether I think about winning more Slams and breaking records, of course. Of course, I do,” Djokovic said. “Most of my attention and my energy from this day forward, until I retire from tennis, is going to be directed in majors, trying to win more major trophies.”

If Djokovic could win a Grand Slam with a muscle tear, will anyone be able to stop him?