World No. 1 Novak Djokovic gets the better of No. 23 seed Roberto Bautista Agut on Friday for a place in his sixth Wimbledon final.

The Serbian will play Federer on Sunday

World No. 1 Novak Djokovic weathered a mid-match dip in form against Roberto Bautista Agut on Friday afternoon to book his place in a sixth final at The Championships, Wimbledon.

“It’s the final of Wimbledon. This is the kind of match that I always dreamed of being part of as a young boy with the tennis racquet. This is what I worked for. I wanted to be in this position,” said Djokovic. “I have a chance to fight for a trophy. Regardless of who's across the net or what is happening, I'll definitely give it my all.”

Djokovic, who had lost to Bautista Agut in three of their previous five FedEx ATP Head2Head meetings — including at the Qatar ExxonMobil Open and at the Miami Open presented by Itau this season — sailed through the first set with two service breaks, hitting 12 winners to seize the momentum. But Bautista Agut settled in the second set, before Djokovic regrouped midway through the third set and, as the pressure on his opponent increased, he broke decisively in the third game of the fourth set en route to his 71st victory in 81 matches at Wimbledon.

You May Also Like: Novak & Roger: Every Match Ever Played

The 32-year-old will now prepare to face second seed and eight-time former Wimbledon champion Roger Federer in a blockbuster final on Sunday at the All England Club. Federer defeated third seed and two-time former titlist Rafael Nadal in the second semi-final of the day.

Djokovic, who leads both of his long-time rivals Federer (25-22) and Nadal (28-26) in their career series, is the fourth man in the Open Era (since April 1968) — after Federer, Jimmy Connors and Boris Becker — to record 70-plus match wins at The Championships.

The 74-time tour-level champion, who captured his 15th Grand Slam championship crown at the Australian Open (d. Nadal) in January and a 33rd ATP Masters 1000 title at the Mutua Madrid Open (d. Tsitsipas) in May, improves to a 34-6 match record in 2019. Bautista Agut won the first point of the match with a forehand, but Djokovic immediately took control, content on rallying with the Spaniard from the baseline. Through two games, Bautista Agut had committed four forehand errors in his first Grand Slam championship semi-final and Djokovic turned the screw en route to a 3-0 advantage. Bautista Agut settled after winning his first service game in the fourth game, but Djokovic’s relentless intensity meant he won few easy points. Djokovic completed the 37-minute first set with a backhand return, which saw Bautista Agut overhit a forehand in response. Djokovic won 93 per cent of his first-service points and committed just five unforced errors in the opening passage of play.

With his first love service hold, Bautista Agut relaxed and he broke Djokovic to 15 for a 2-1 lead after a powerful forehand winner. Errors began to creep into Djokovic’s game, but shortly prior to the start of the fifth game, a spectator was taken ill courtside and play was suspended for a few minutes. Upon the resumption of play, Djokovic recovered from 15/40 with four straight points for 2-3, but Bautista Agut remained aggressive and was comfortable in attacking the net to finish points. The 31-year-old seized upon Djokovic’s dip in form, losing just four of 24 service points in the second set that lasted 45 minutes and ended with a forehand net cord winner.

Djokovic changed up his tactics in the third set, using a forehand slice on approach to the net, rather than powerful groundstrokes to keep Bautista Agut, who still produced flashy winners, guessing and on the back foot. Just as the match was in the balance, Djokovic made his move with terrific athleticism and net rushing in the sixth game on Bautista Agut’s serve. Two smash winners helped Djokovic to a 4-2 advantage, but the pressure didn’t let up on the Serbian as he saved two breaks points — the second, with a backhand to end a 45-stroke rally. Djokovic hit his second double fault of the match at 5-3, 40/0, but struck a low forehand volley winner to seal the set.

“I think I deserved a little bit more in the third set,” said Bautista Agut. “The third set for me was the best set of the match. We both played very good tennis.”

Bautista Agut let out a couple of cries of “Vamos!” in saving three break points in a 16-point opening game of the fourth set, but the intensity of Djokovic’s recovery soon caught up on the Spaniard. Bautista Agut hit a backhand long to hand Djokovic the third game and a backhand error in game five gave the top seed a 4-1 advantage. The Serbian let out a roar as he closed out the encounter, on his fifth match point, with an unreturned serve.

Djokovic hit 42 winners, including nine aces, and won 77 per cent of his first-service points in the semi-final. Bautista Agut, one of the fittest players on the ATP Tour, committed 30 unforced errors - one more than his opponent - and covered on average 18 metres in each of the 220 total match points.

Bautista Agut, who had played almost 10 hours over five matches en route to his first Grand Slam championship semi-final appearance, is now 28-12 on the season. The 31-year-old, who was originally scheduled to be on his bachelor party in Ibiza today, has moved up to seventh position in the 2019 ATP Race To London for a place at the Nitto ATP Finals, to be held at The O2 in London from 10-17 November.

“Every experience I had in my tennis career made me a better player, made me do things better the next time,” said Bautista Agut. “A lot of experiences today in the match. A lot of new situations. A lot of new emotions. I’m happy for the way I played, happy with the result I had here in Wimbledon.” 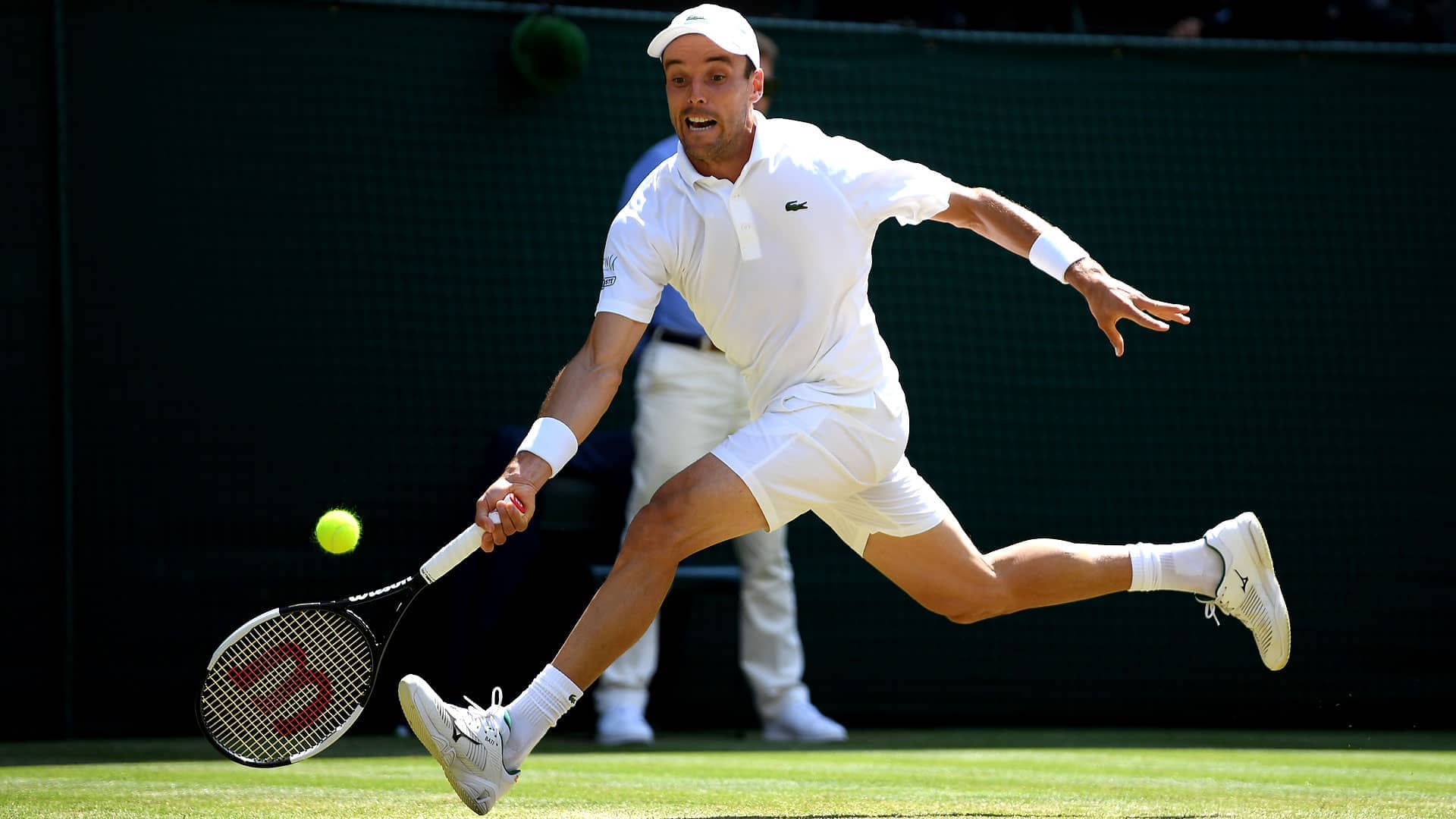