Novak Djokovic rallies from a set down to defeat Matteo Berrettini in four sets on Sunday in the Wimbledon final.

How Djokovic Beat Berrettini In The Wimbledon Final

Another major, another series of historic accomplishments for Novak Djokovic. The World No. 1 defeated Matteo Berrettini 6-7(4), 6-4, 6-4, 6-3 on Sunday in the Wimbledon final to claim a record-tying 20th Grand Slam trophy.

Djokovic tied Roger Federer and Rafael Nadal’s all-time men's singles major titles record. The 34-year-old has now completed the first three stages of the Calendar-Year Grand Slam by winning the Australian Open, Roland Garros and The Championships. Djokovic is the first man to triumph at the season's first three majors since Rod Laver claimed all four in 1969.

The top seed let slip a 5-2 lead in the first set — including a set point in that game — to allow Berrettini into the match. But Djokovic cleaned up his game on Centre Court and used great depth and consistency to emerge victorious after three hours and 23 minutes, falling to the court in celebration after the Italian missed a final backhand slice.

Djokovic got off to a slow serving start, hitting three double faults in his first two service games to put himself into trouble. But Berrettini could not capitalise, failing to put a forehand return into play on a break point in his first return game.

The top seed took full advantage when he found his rhythm at 2-1. The five-time Wimbledon champion converted his second break point of the match with tremendous depth off a defensive open-stance backhand, a shot that Berrettini was unable to handle. The Serbian's inability to secure a second break at 5-2 — when he held a set point, but could not manage a forehand  — proved costly.

The seventh seed, who misfired from the baseline early on, found his rhythm and began taking control of baseline rallies. Berrettini battled hard to get back on serve and then used his forehand power to take the lead in the tie-break, finishing the 70-minute set off with his fourth ace. 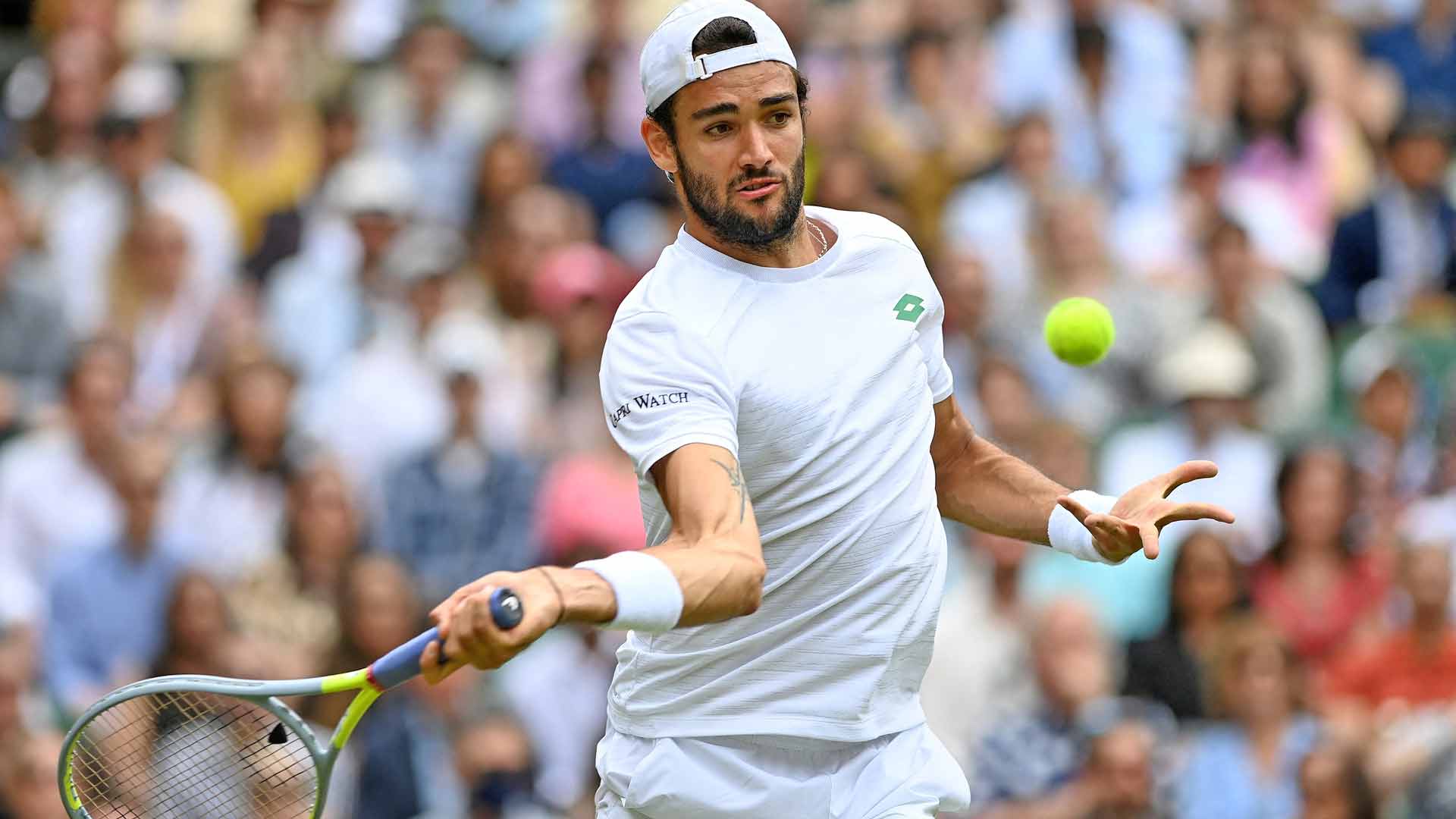 Photo Credit: AFP/Getty Images
But Djokovic fired back with a vengeance in the second set. He significantly raised his level, removing the loose mistakes from his game by making just four unforced errors in the set.

The 19-time major winner broke Berrettini's serve twice to take a greater lead. And he needed that breathing room, as Berrettini fought hard to earn one break back and battle from 0/40 at 3-5. But Djokovic was able to remain calm and hold to love to win the set, quietly pumping his fist when the Italian missed a forehand return.

The 84-time tour-level titlist maintained his momentum by breaking for 2-1 in the third set when Berrettini missed a backhand slice into the net. The 25-year-old had two chances at 2-3 to get back on level terms, but he missed two consecutive passing shots — both of which were makable — and Djokovic cruised through the set from there.

Berrettini passed up opportunities to go after his shots and hit through the top seed to avoid making unforced errors. Although you would expect the big-hitting Italian to move forward more than Djokovic, it was the World No. 1 who more often journeyed forward, winning most of the cat-and-mouse points in the match.

In the fourth set, 2019 Nitto ATP Finals competitor Berrettini showed he still had belief and made a push to force a decider. At 2-3 15/30, Djokovic was close to facing two break points, but he played incredible defence off a Berrettini inside-out forehand before sprinting forward to a drop shot, off which he found an acute crosscourt forehand angle.

After holding in that game, Djokovic earned a break point in the next game with a hammer-like crosscourt forehand winner. And on the next point, Berrettini double-faulted, and the Serbian made no mistake in serving out his final two service games.

Djokovic now leads the pair's ATP Head2Head series 3-0, including a four-set win in this year’s Roland Garros quarter-finals. The World No. 1 is on a 21-match grass-court winning streak, and Berrettini, this year's cinch Championships winner, saw his 11-match winning streak on the surface come to an end.

Berrettini was going for national history in his first major final. Already the first Italian to make the final at The Championships, he was trying to become the first man from his country to claim Grand Slam glory since Adriano Panatta triumphed at Roland Garros in 1976. The only other Italian man in history to win a major was Nicola Pietrangeli, who emerged victorious in Paris in 1959 and 1960.