Novak Djokovic and Matteo Berrettini are set to clash for the second time this season in the Wimbledon final.

Preview: Berrettini vs Djokovic, Not Quite David & Goliath, In Wimbledon Final

With history on the line, a mouthwatering clash awaits in the final match at The Championships, Wimbledon, as World No. 1 Novak Djokovic will take on seventh seed Matteo Berrettini for the Gentlemen’s Singles Trophy on Sunday.

The battle between 19-time Grand Slam champion Djokovic – who is going for his third consecutive major title of the year and contesting his 30th final – and Berrettini, a first-time Grand Slam finalist, is being billed as a ‘David vs Goliath’ type clash on Centre Court.

But in our tale, David actually towers over Goliath at 6’5”, and Berrettini’s weapons – a booming serve and powerful forehand – can do quite a bit of damage on grass courts. The seventh-seeded Italian is riding an 11-match winning streak after lifting the cinch Championships trophy, his first ATP 500 triumph, in the build-up to Wimbledon.

“I'm just so, so happy for everything,” Berrettini said after his semi-final win. “My year started in a good way, with the finals in the ATP Cup. Then I got injured again. I kind of saw those ghosts again, of my body kind of struggling.


After an injury-affected 2021 season, Berrettini is back at his best at the All England Club, where he is searching for his sixth tour-level trophy and his first at the Grand Slam level. He previously featured in the 2019 US Open semi-finals (l. to Nadal), but he is in uncharted territory after recording victories over Felix Auger-Aliassime and Hubert Hurkacz to reach the championship match.

A victory on Sunday would make Berrettini the first Italian man to lift a Grand Slam trophy since Adriano Panatta’s 1976 triumph at Roland Garros, and the first to do so at Wimbledon.

But he’ll have to find a way past heavyweight Djokovic, the top seed, whom he trails 0-2 in their ATP Head2Head. Berrettini has never defeated a Top 10 player in a completed Grand Slam match; in Paris, he received a walkover from World No. 8 Roger Federer into the quarter-finals, where he met Djokovic.

Berrettini, still finding his feet after an abdominal injury kept him off the courts at the start of the season, managed to take one set from the eventual champion. The Italian got his big game going too late in a dramatic 6-3, 6-2, 6-7(5), 7-5 defeat on Court Philippe-Chatrier – he’ll be aiming for a faster start on Centre Court. 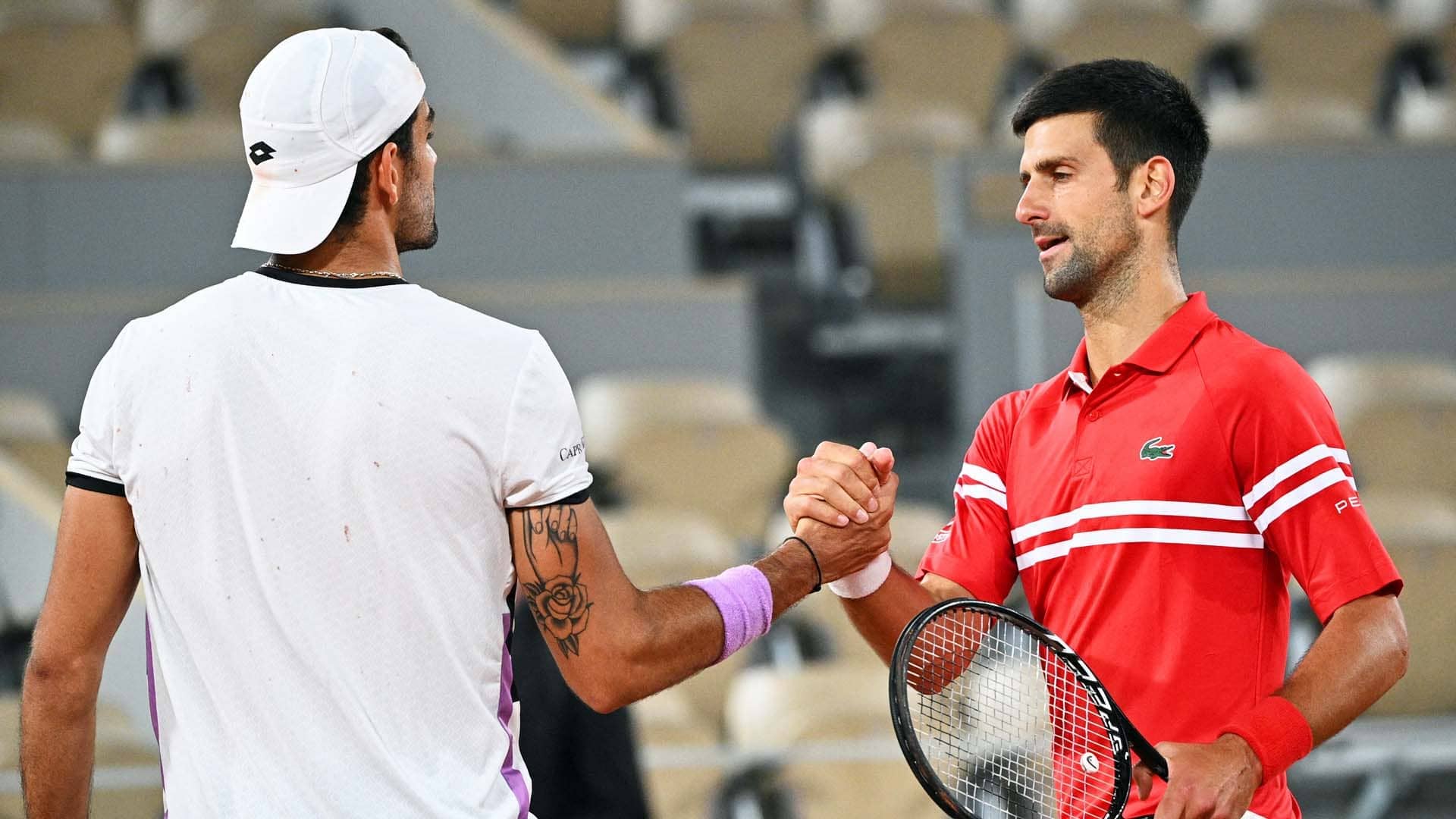 Berrettini and his powerful serve will face a major challenge against Djokovic, one of the best returners in the game. The pace and precision of the World No. 1’s backhand will also provide a perfect counterbalance to the seventh seed’s heavy forehand when they settle into baseline battles.

“He's one of the best players in the world in the last 12 months, I think,” Djokovic assessed. “With big weapons in [the] serve and forehand, he can play well on any surface. Obviously, grass favours him even more, favours his game.

“If he serves big, as he did throughout the entire tournament, it's tough to break his serve. It's tough to go into the rhythm, to find a good positioning to return, make him play. But I believe in my return. I think [the] return has served me very well throughout my career."

You May Also Like: Berrettini's Wimbledon Final 11 Years In The Making: Coaches’ Corner

Djokovic has looked more and more untouchable at SW19 since the tournament began as he looks to add another Grand Slam crown to his ever-growing haul. The World No. 1 has won 17 matches in a row in 2021, a streak that dates back to his Belgrade trophy and includes a historic Roland Garros triumph, where he became the first man in the Open Era to win all major titles twice.

On grass, it’s an even longer streak of success for Djokovic. His last defeat on the surface came at the hands of Marin Cilic in the 2018 Queen’s Club final – since then, he’s won 20 matches in a row, including back-to-back Wimbledon titles. He has only dropped one set this fortnight, against wild card Jack Draper in the first round, and aced big tests against former finalist Kevin Anderson and lefty Denis Shapovalov on the way to the final.

A third consecutive triumph, his sixth overall at Wimbledon, would bring him to 20 Grand Slams – tying the all-time record shared by Roger Federer and Rafael Nadal.

“It would mean everything. That's why I'm here. That's why I'm playing,” Djokovic said after his semi-final victory. “I imagined myself being in a position to fight for another Grand Slam trophy prior to coming to London. I put myself in a very good position. Anything is possible in the finals. Obviously, experience is on my side.”

Perhaps in a sign of the times, it will be Djokovic’s third consecutive Grand Slam where he has not met another member of the Big Three – Federer or Nadal – in the championship match. In fact, since the start of 2019 all but three Grand Slams have featured finals with one 25-and-under player: Dominic Thiem, Daniil Medvedev, Alexander Zverev, Stefanos Tsitsipas and now Berrettini.

“I think that experience definitely favors me every single time,” Djokovic reflected. “Next time I get to work on the court, [I do so] knowing that I've been through everything that I could possibly go through as a tennis player. I know my strengths. I know what I'm capable of. I rely on that."

After a fortnight of chasing triumph and dodging disaster at the All England Club, Djokovic stands one match away from a monumental achievement. Can he continue fending off newer and younger challengers, or will Berrettini be the one to find a way to topple the 'giant' and seize the moment for himself?