ATP Staff
This article contains:
Serbian is into his 10th semi-final on the Parisian clay

There were scary moments for World No. 1 Novak Djokovic in his Roland Garros quarter-final against Pablo Carreno Busta. But despite visibly struggling with his left arm early on Wednesday evening, the Serbian triumphed 4-6, 6-2, 6-3, 6-4.

The 2016 champion only lost 25 games en route to the last eight in Paris, a personal best. But it was clear he was in for a battle early against the 17th seed, launching many unforced errors and massaging — or, in some case hitting — his left arm on nearly every changeover in the first set. Following treatment from an ATP physio following the set, Djokovic settled in and charged into his 10th Roland Garros semi-final.

"I definitely didn't feel great coming into the court today," said Djokovic, noting he was dealing with neck and shoulder issues. "I don't want to take away anything from his good performance. Especially for a set-and-a-half he was the better player, dictating play. I was very neutral.

"I didn't have much energy really... in my legs or movement or game itself. It took me about a set-and-a-half to really get comfortable and start really playing the way I should."

Even if he wasn't physically at 100 per cent, Djokovic battled hard, pumping himself up with roars throughout the match. As the match wore on, he played relatively clean tennis and found a rhythm on return to scrape past the indefatigable Spaniard after three hours and 10 minutes. 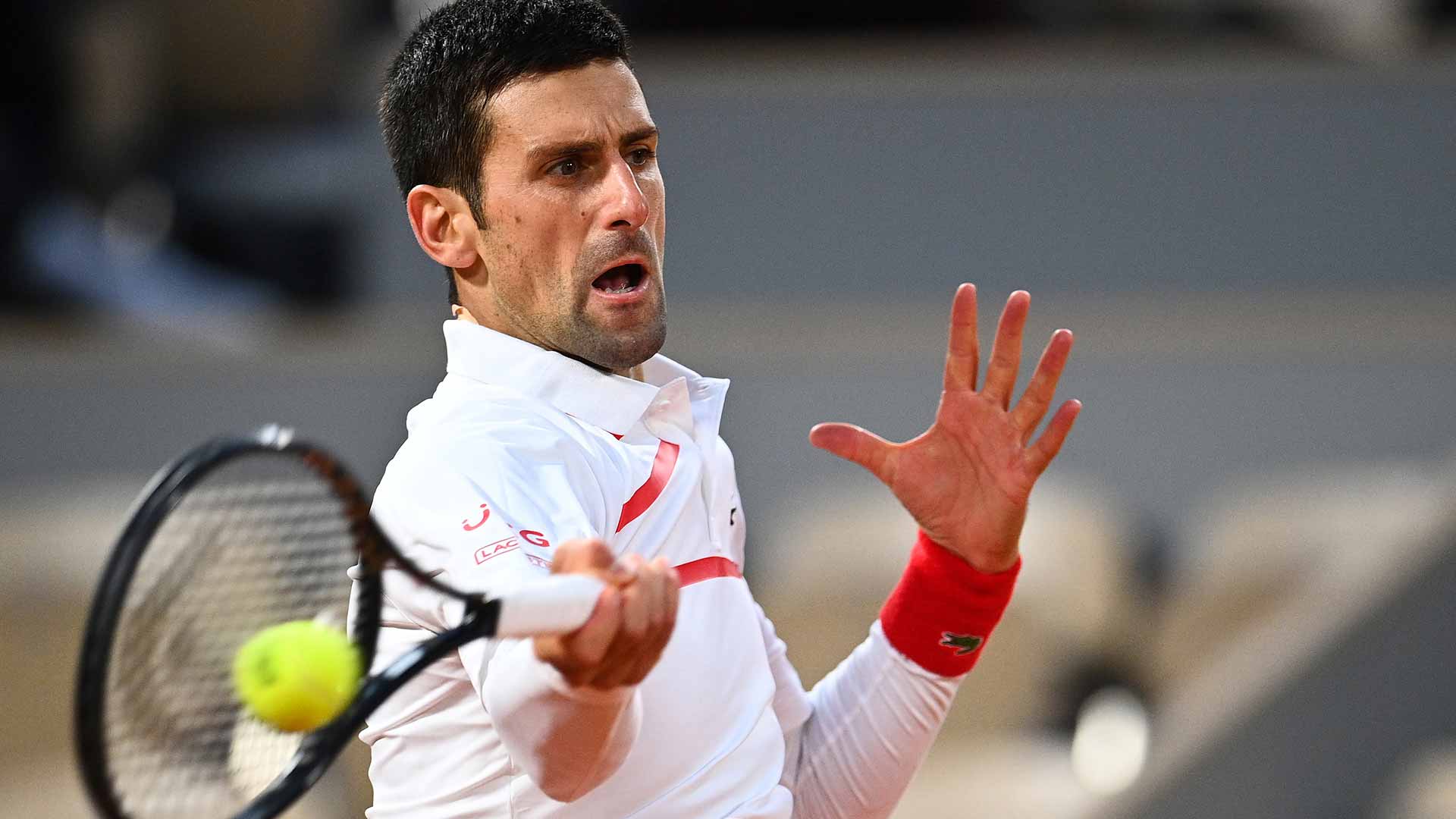 Photo Credit: AFP/Getty Images
"It was really anybody's game. It was so close," Djokovic said. "He had his chances. I had my chances. It was a very even match even though it was three sets to one."

The first indication something was amiss for the 33-year-old was when he walked on Court Philippe-Chatrier with tape on his neck. Djokovic showed his discomfort by trying to adjust his arm between points.

Carreno Busta took full advantage at the start of the match, playing solid tennis and placing balls deep in the court to force Djokovic to beat him, which he wasn't able to do in the first set. The 17-time major champion landed only 40 per cent of his first serves in the opener, indicating issues with his service toss. Early in the second set, he gingerly hit an overhead.
But Djokovic quickly regained his form, making 70 per cent of his first deliveries in the second set and significantly reduced his error count for the rest of the match. The top seed only made seven unforced errors in the second and began playing with more margin, showing a willingness to hang in longer rallies with the 17th seed.

In the first game of the third set, the Serbian faced two break points. He let out massive screams knowing that was a pivotable moment. Djokovic held on and then broke with a backhand drop shot, sprinting to a 3-1 lead.

Carreno Busta did not go away, getting back on serve with a forehand winner. But Djokovic was the more consistent player, while also being more aggressive. Once again the Serbian made just seven unforced errors in the third set, putting a lot of pressure on the Spaniard in key moments.

"[The] match turned around quickly. [It was about a] few points here and there," Djokovic said. "I saved some break points mid-third set that were crucial, obviously going two sets to one up." 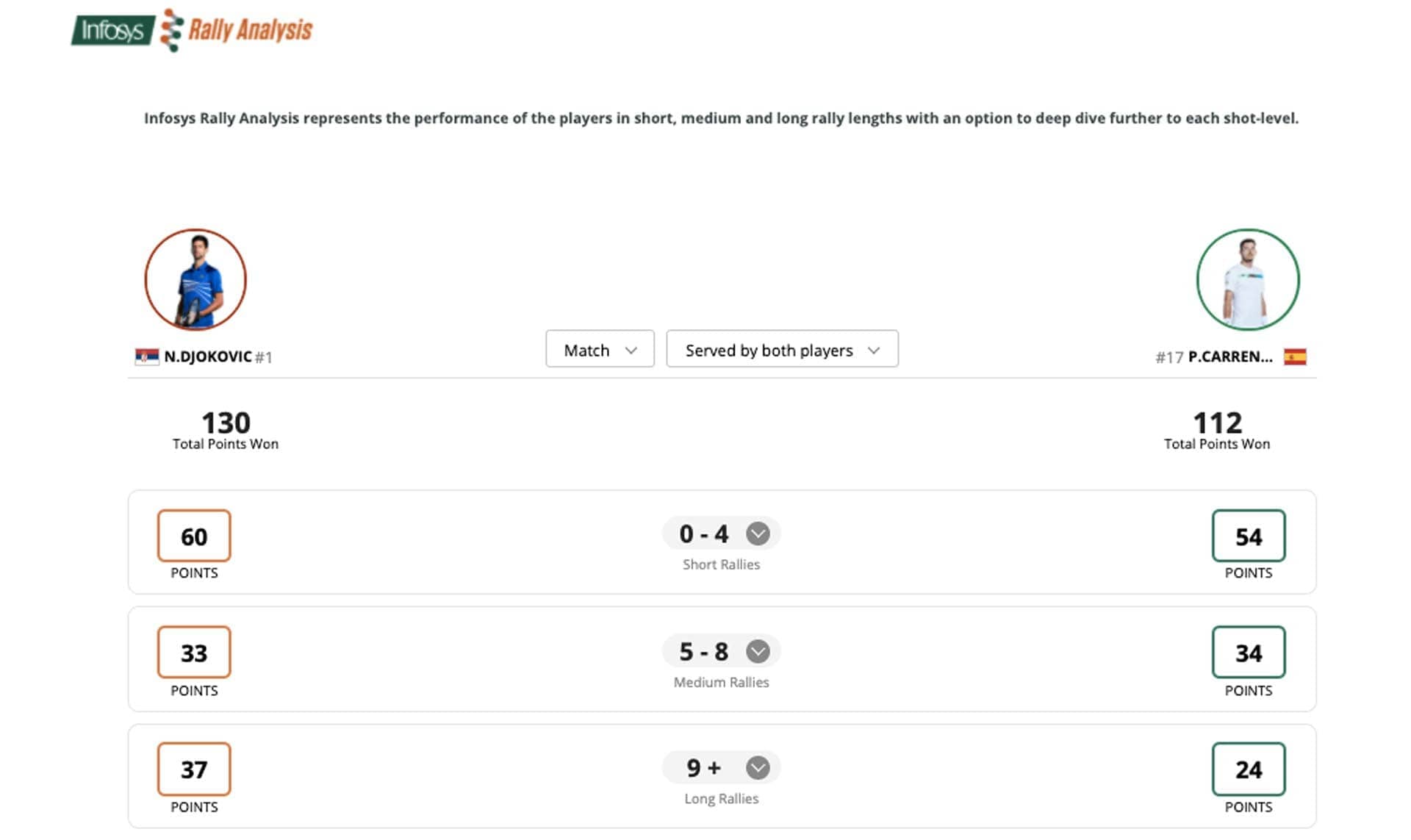 Carreno Busta faced an uphill battle from there and he got broken by being too cute with a forehand shovel only feet from the net. Serving in the next game at 4-3, Djokovic let slip his concentration momentarily, and he had to face three break points. But a forehand dink lob, impatience from the Spaniard and a big forehand got Djokovic out of trouble. He closed out his triumph with a curling cross-court forehand, marking his 53rd winner of the evening.

Djokovic will next face reigning Nitto ATP Finals champion Stefanos Tsitsipas, who ousted Hamburg European Open champion Andrey Rublev in straight sets. Djokovic leads their ATP Head2Head series 3-2, but the Greek's two victories have come at ATP Masters 1000 events. This will be their first clash at a Grand Slam.

Djokovic has won 16 of his past 17 major matches against Top 20 opposition, with his only loss coming in last year's Roland Garros semi-finals against Dominic Thiem. He is 36-1 on the season.

Carreno Busta was trying to reach his first Roland Garros semi-final. The Spaniard is a two-time US Open semi-finalist, advancing to the last four in New York last month.