Novak Djokovic, the 2008 finalist, won 11 of the last 12 games against qualifier John Millman on Tuesday at the Fever-Tree Championships.

Djokovic In Confident Mood, Next Up Dimitrov At Queen's Club

Dimitrov made to work in first test

Novak Djokovic made a winning return to the Fever-Tree Championships on Tuesday, his first appearance at The Queen’s Club since 2010.

The Serbian wild card competed with great confidence and quickly broke down the game of John Millman, the Australian qualifier, 6-2, 6-1 in 65 minutes for a place in the second round.

“It was a good match,” said Djokovic. The focus was there, I had the right intensity every shot. Every shot was working really beautifully. I thought I put a lot of pressure on him, on his service games, because I was getting a lot of returns back in play. Also I was quite solid on my returns, my strokes, and he was on the back foot from the beginning of the point. I'm very pleased to be able to start off the grass court season this way at the tournament where I haven't participated for eight years.”

Djokovic, runner-up to Rafael Nadal in the 2008 final, will next challenge second-seeded Bulgarian Grigor Dimitrov, the 2014 champion. Djokovic leads 6-1 in their FedEx ATP Head2Head series, with their lone grass-court match coming at Wimbledon in June 2014.

“Right now it's all about tennis, all about improving, and getting on a high level,” said Djokovic.”So a match against Dimitrov, obviously, is a very good challenge for both of us, especially me at this time, with not too many matches under my belt in general this year or the past 12 months."

Dimitrov said, “You have to go through matches like this in order for you to win a tournament. Whether it's early rounds or late in the tournament, you still have to beat those kind of guys. (Novak) played a very good match. I watched a little bit… I'm here to play, I'm here to compete and try to find a better game. Simple as that.”

Djokovic, who is now 7-3 at The Queen’s Club, continues his return to peak form, following a small medical intervention on his right elbow in late January. In recent weeks, the former World No. 1 has reached the Internazionali BNL d’Italia semi-finals (l. to Nadal) and the Roland Garros quarter-finals (l. to Cecchinato).

From 1-2 down, Djokovic went on a tear, largely using his backhand to open up the court for forehand winners into space. He won seven straight games, illustrating how top-level players thrive on confidence, until World No. 63 Millman, this year’s Gazprom Hungarian Open finalist (l. to Cecchinato), broke the streak.

The 29-year-old Millman, who has battled to overcome hip and groin injuries in recent years, has now lost his past five tour-level matches since reaching his first ATP World Tour final in Budapest on 29 April. 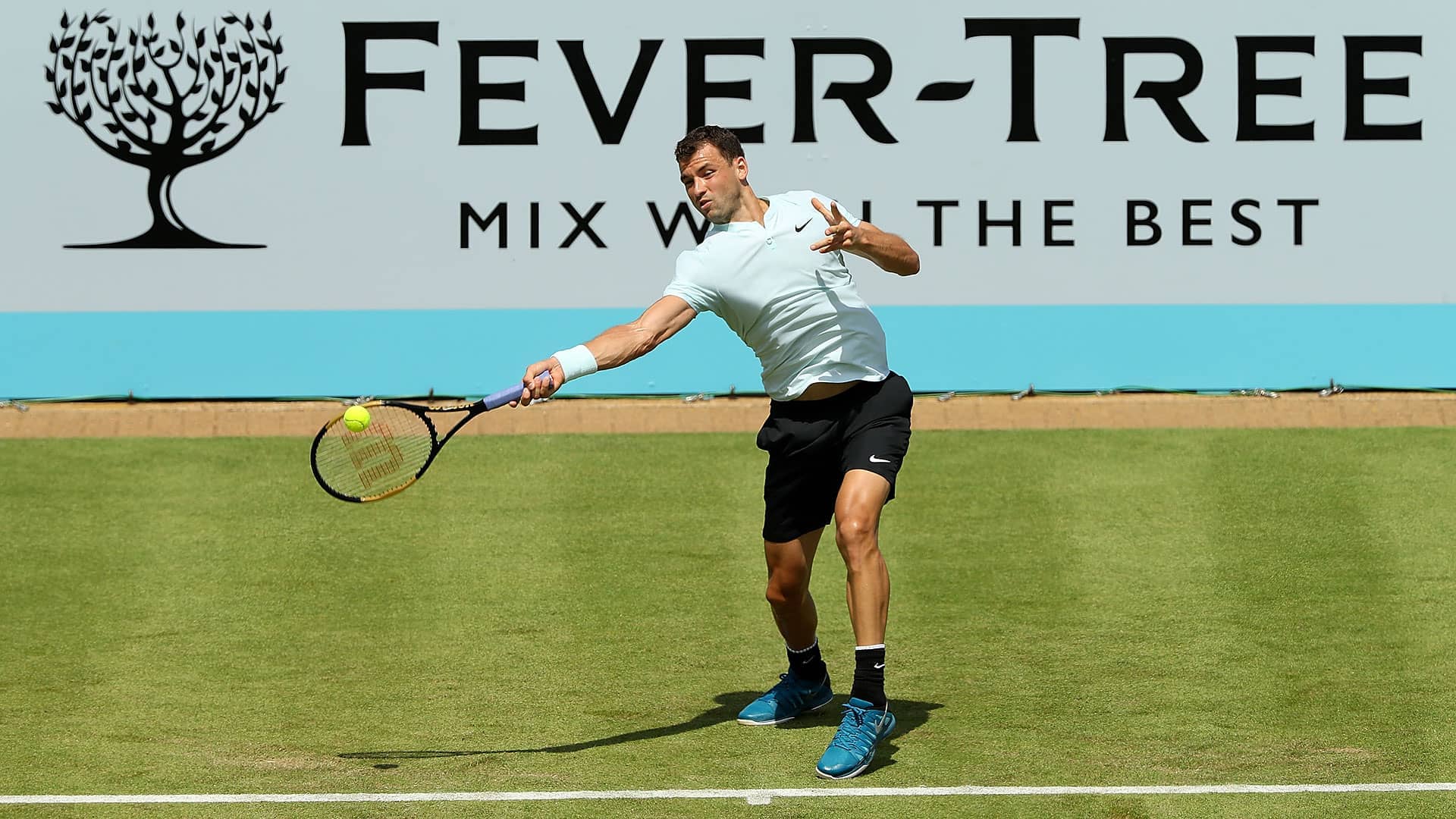 Earlier in the day, Dimitrov dug deep to find a way past the gritty performance of Damir Dzumhur. The Bulgarian was solid on first serve, but struggled at times to outclass World No. 29 Dzumhur — playing just his eighth match on grass — 6-3, 6-7(4), 6-3 in just over two hours.

On his 10th straight appearance, Dimitrov saved six of eight break points to maintain his perfect record (3-0) against Dzumhur, who has now lost his past six matches against members of the Top 10 of the ATP Rankings (4-12 lifetime).

“It was one of those matches that the only thing I'm happy with is just winning,” admitted Dimitrov. “I definitely could have done a few things better, but, it’s still my first match on grass. I was a little rusty, obviously. Overall I served well and returned well when I had to. Those are all good signs for me. I just want to pick up that positivity and carry it on.”