World No. 1 Novak Djokovic worked his way back after a strong early performance by British wild card Jack Draper on Monday at the start of the Serbian’s historic title defence at The Championships, Wimbledon.

Five-time titlist Djokovic, who is bidding to tie Roger Federer and Rafael Nadal’s record of 20 Grand Slam singles matches over the next fortnight in south-west London, knocked out 19-year-old Draper 4-6, 6-1, 6-2, 6-2 in front of 7,000 spectators on Centre Court.

"It feels great seeing everyone and being back on probably the most special, the most sacred tennis court in the world," said Djokovic, in an on-court interview. "Obviously, alongside many other players, I was very sad last year that Wimbledon was cancelled. [It was] very difficult times for everyone, but I'm really glad that the sport is back and hopefully you guys have enjoyed it and you will enjoy it in the next couple of weeks."

Having won just 12 of 36 return points in the first set, failing to convert seven break points, Djokovic began to move freely on the lush grass and tightened up his game. The 34-year-old then hit 19 aces and lost just four first-service points for the remainder of the match, which lasted two hours.

"To be honest, I don't recall falling this many times on the court," said Djokovic. "[It was] obviously a huge honour to walk onto this court, for me at least the most special court. I always dreamed of playing at Wimbledon [and] winning Wimbledon one day when I was a kid growing up in Serbia."

Djokovic will next challenge former World No. 5 Kevin Anderson, who he beat in the 2018 Wimbledon final. Djokovic leads Anderson 9-2 in their ATP Head2Head series, including three wins at Wimbledon. Anderson defeated Chilean qualifier Marcelo Tomas Barrios Vera 6-7(4), 6-4, 6-4, 7-6(4) in three hours and seven months. 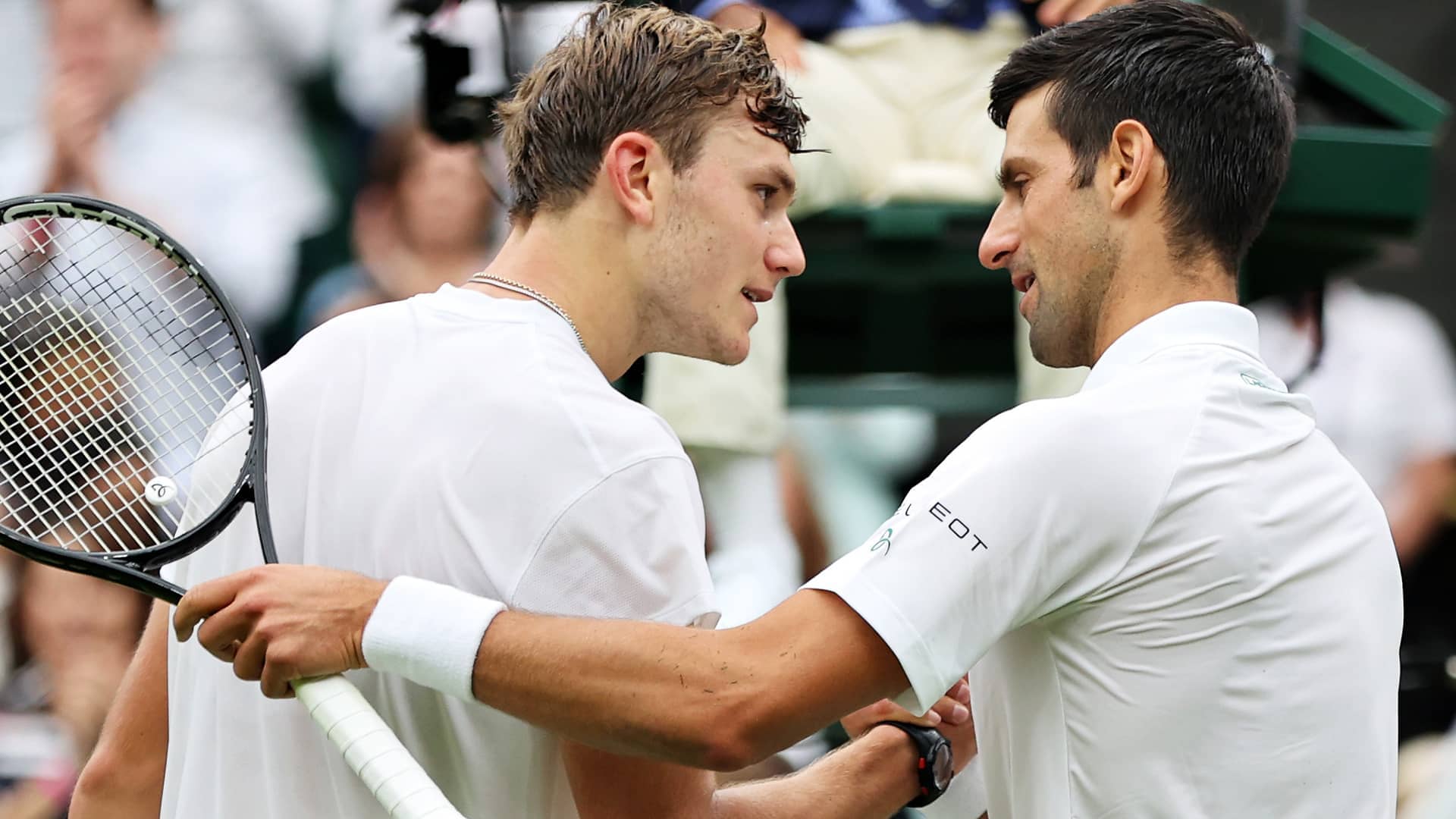 Draper hit the ground running on his main draw debut at the All England Club and didn’t appear to be fazed when facing his first Top 10 opponent. The World No. 253 capitalised on early errors from Djokovic to break the Serbian, who slipped three times in the early exchanges on the Centre Court grass. Draper saved seven break points across three of his five service games, and clinched the 37-minute opener with a strong service hold.

Djokovic didn’t panic after one poor service game had given Draper the advantage. The five-time champion responded immediately in the second set, winning 13 of the first 16 points. An ace, followed by a second-serve ace gave Djokovic the set in 26 minutes and by keeping Draper on the move in long rallies, the top seed soon had another service break early in the third set.

Draper, the 2018 junior Wimbledon finalist (l. to Tseng Chun-hsin), couldn’t make any inroads on Djokovic’s serve (16/16) in the third set and found himself exposed in long rallies. Djokovic, who won 12 of the last 14 points, often left Draper rooted to the spot in four consecutive service holds to love.

There was no way back. Djokovic sealed a 2-1 lead in the fourth set with a deep return, which caught Draper off guard, and ripped a backhand winner down the line for a 4-1 advantage. Another slip and a rare unforced error from Djokovic saw Draper drop to 30/40 in the sixth game, but he soon struck two consecutive aces.

"He definitely deserves a round of applause," said Djokovic. "He's a youngster, only 19. [I] hadn't seen him play too much prior to the Queen's tournament, [where] he played pretty well and won a couple of matches against higher-ranked players. Walking onto Wimbledon's Centre Court for him for the first time, I think he has done extremely well. He carried himself very maturely on the court. I think he behaved well, he backed himself, he believed that he could come back, and he deserves credit for that. I wish him all the best for the rest of his career."

The Serbian superstar has already captured his ninth Australian Open crown (d. Medvedev) in February and a second title at Roland Garros (d. Tsitsipas) earlier this month. He has a 28-3 match record on the season, including the Belgrade Open title (d. Molcan).

The 19-year-old Draper, who was making his Grand Slam main draw debut, reached the cinch Championships quarter-finals (l. to Norrie) two weeks ago.

The first day of play at The Championships was affected by light rain. Originally scheduled to begin at 11:30am local time, matches on the outside courts started at 3:40pm.