World No. 1 Novak Djokovic begins his road to a record sixth Indian Wells title on Saturday with a straight-sets win against Bjorn Fratangelo.

Novak Djokovic began his pursuit of a record sixth BNP Paribas Open title on Saturday evening, defeating American Bjorn Fratangelo 7-6(5), 6-2 in the second round. It was the World No. 1’s 50th win in Indian Wells, his highest total at any ATP Masters 1000 event.

Djokovic played Fratangelo in the same round three years ago in the desert , dropping the opening set before battling back for the win. It was almost déjà vû for the Serbian, as the World No. 128 served for the opening set at 5-4 and held a mini-break lead at 5/4 in the tie-break. But Djokovic was rock solid in the biggest moments, ousting Fratangelo after one hour and 29 minutes in his first match since earning a record seventh Australian Open crown in January. He jogged over to greet former World No. 1 Pete Sampras in the front row after match point. 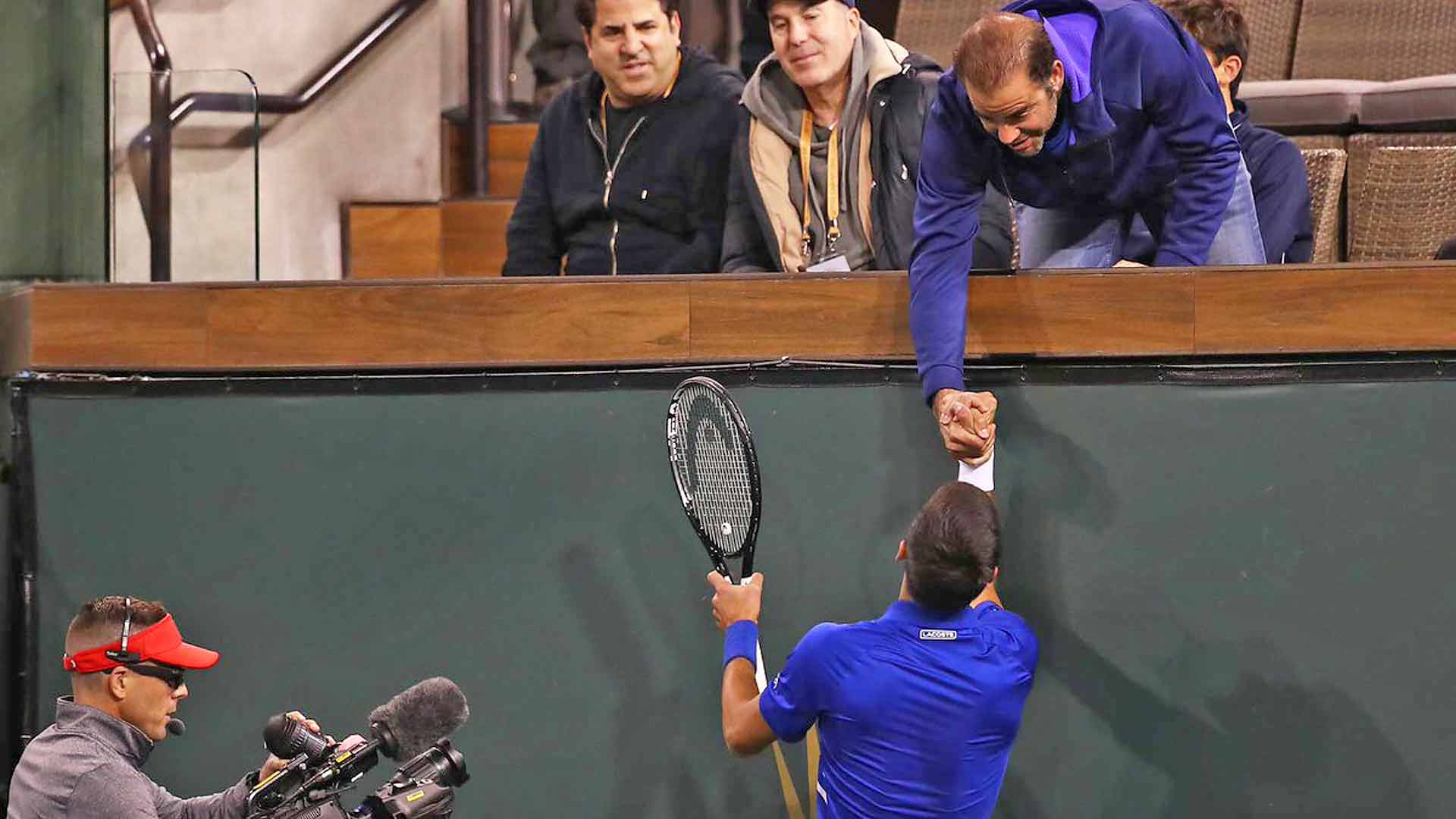 "Credit to him. He played well and had nothing to lose. I thought his backhand was terrific, [he] was taking it on the rise," Djokovic said. "The first set was just hanging on to the ropes and trying to win that set. Then the second set, obviously with the first set under my belt, was slightly better. I ended the match in a positive fashion."

Djokovic, who is now 11-1 on the season, became the first player to triumph at three consecutive Grand Slams on three occasions by triumphing in Melbourne. The 31-year-old is trying to make more history at Indian Wells, where he can tie World No. 2 Rafael Nadal’s record of 33 Masters 1000 titles.

While it was tricky at first, Djokovic made a good start in front of a packed stadium. He won 74 per cent of his service points, while Fratangelo was able to claim just 54 per cent of points on his delivery. The American did well to play relaxed, aggressive tennis to take the lead early, but Djokovic’s consistency in rallies and steadiness in level proved too much. Djokovic joked that having Sampras in the first row affected him.

"I have to admit I was a bit nervous. I don't get to see Pete that often. I was pleasantly surprised to see him watching my match. It's a thrill, obviously, to see someone that I looked up to when I was a kid. I think I tried too hard in the first set to impress him," Djokovic said, cracking a laugh. "It was really nice, and I went up to him and I thanked him for coming."

Australian Nick Kyrgios arrived at the BNP Paribas Open fresh off an impressive run to the title at the Abierto Mexicano Telcel presentado por HSBC, where he defeated World No. 2 Rafael Nadal, former World No. 3 Stan Wawrinka and reigning Nitto ATP Finals champion Alexander Zverev. Based on his level, it appeared Kyrgios could challenge anyone across the net from him, and it was possible he would face Djokovic in a third-round blockbuster

But Kyrgios could not beat German Philipp Kohlschreiber. Kohlschreiber defeated the 31st seed 6-4, 6-4 in one hour and 14 minutes, evening their FedEx ATP Head2Head series at 1-1, to set a clash against the top seed.

"He's an incredible competitor... I thought  I didn't play my best tennis today, but on certain points where I maybe had a little sniff or a little chance to get into the match, he came up with a really good shot to break me in the first set," Kyrgios said. "He's just tough. He knows how to win tennis matches."

Entering the week, Kohlschreiber had not won a match, outside of Davis Cup, since the first round of the Australian Open. But he has dropped only 12 games en route to the third round, after also defeating in-form Frenchman Pierre-Hugues Herbert.

Kohlschreiber is into the third round at Indian Wells for the 10th time. While Kyrgios has won both of his FedEx ATP Head2Head matches against Djokovic, the Serbian leads Kohlschreiber 8-1 in their rivalry, including a 3-0 record at the first ATP Masters 1000 event of the year. 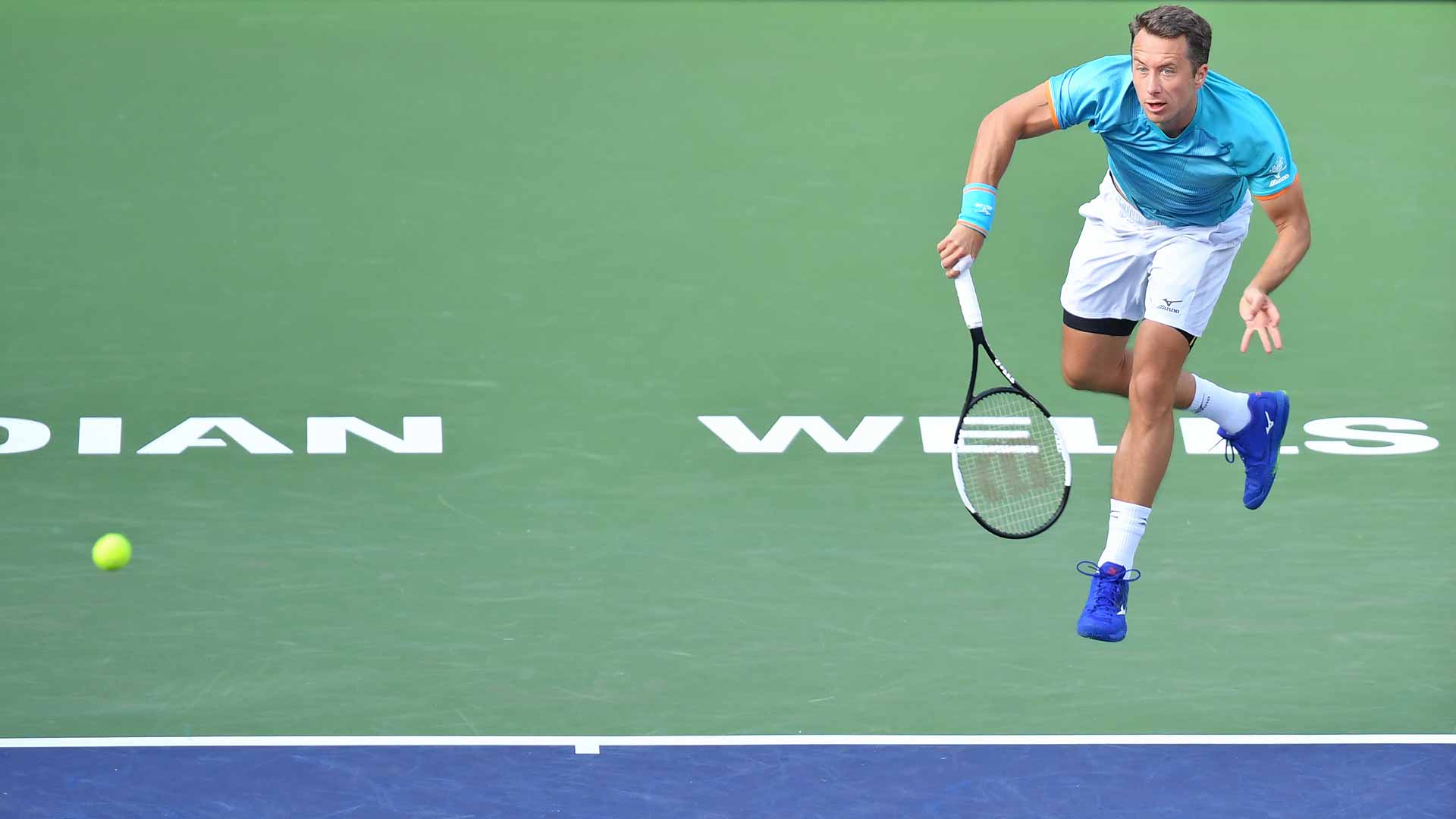 In the same section of the draw, 18th seed Gael Monfils battled past Argentine Leonardo Mayer 6-4, 3-6, 6-3 in one hour and 59 minutes. The Frenchman advances to face Spaniard Albert Ramos-Vinolas, who ousted 15th seed Marco Cecchinato 6-4, 6-2.

Monfils is in good form, having lifted his eighth ATP Tour trophy at the ABN AMRO World Tennis Tournament. The 32-year-old was also impressive in reaching the semi-finals of the Dubai Duty Free Tennis Championships, another ATP 500 event.

Monfils lost just six service points in the deciding set against Mayer, taking advantage of the Argentine’s low first-serve percentage (29%) to reach the third round in Indian Wells for his fifth straight appearance.