Novak Djokovic produced a returning masterclass to surge to a 4-6, 6-3, 6-4, 7-6(3) victory against Nick Kyrgios in Sunday's final at Wimbledon, where the top seed claimed his fourth consecutive crown at the grass-court major.

Rallying from dropping the first set for the third straight match, Djokovic claimed a seventh title to draw level with Pete Sampras' mark at the All England Club. The 35-year-old Djokovic is now just one behind Roger Federer’s record of eight Wimbledon triumphs, and one Grand Slam title behind Rafael Nadal’s record of 22 major crowns.

“I have lost words for what this tournament, this trophy means to me, my team, my family,” said Djokovic at the trophy presentation. “I’ve said this many times. It always has been and always will be the most special tournament in my heart, the one that motivated me, inspired me to start playing tennis in a small mountain resort in Serbia where my parents used to run a restaurant.

“I was four or five years old and I saw Pete Sampras win his first Wimbledon in 1993. I asked my Dad and Mum to buy me a racquet, and my first image of tennis was grass and Wimbledon. I always dreamed of coming here, just playing in this court, and then realising the childhood dream of winning this trophy. Every single time it gets more meaningful and more special, so I’m very blessed and very thankful to be standing here with the trophy.”

After some scintillating Kyrgios shotmaking took him to the opening set on Centre Court, Djokovic found his rhythm on return to take the upper hand in an intriguing clash of game styles. Despite his opponent firing 30 aces in a three-hour, one-minute encounter, the top seed was clinical in taking his chances, most notably when he crucially broke Kyrgios' serve after the Australian had led 40/0 at 4-4 in the third set. A nerveless showing from Djokovic in the fourth-set tie-break, his first of the tournament, sealed the victory and extended his winning streak at SW19 to 28 matches.

Although his ability to counter Kyrgios’ huge serving was key to Djokovic’s win, the Serbian was just as efficient with his own delivery. The top seed fired 15 aces and won 83 per cent (62/75) of points behind his first serve, compared to Kyrgios’ 70 per cent (64/91).

It marks another hard-fought triumph for Djokovic this week in London, where he overhauled a two-sets-to-love deficit to defeat Jannik Sinner in the quarter-finals and rallied from dropping the first set to Cameron Norrie in the semi-finals. The Serbian also defeated Soonwoo Kwon, Thanasi Kokkinakis, Miomir Kecmanovic and Tim van Rijthoven this fortnight in London.

Read More From The Final
Kyrgios: 'I Was Right There' With Djokovic
Djokovic: 'I Don't Take Any Wins For Granted'
Ivanisevic Praises Djokovic's Win, Calls Kyrgios 'Tennis Genius'

It was Djokovic’s first tour-level win in three attempts against Kyrgios, who had never been beyond the quarter-finals at a Grand Slam prior to this fortnight in London. Despite frequent moments of trademark brilliance from one of the biggest showmen on the ATP Tour, Kyrgios was unable to resist the relentless pressure from Djokovic’s high-class groundstrokes.

“He’s a bit of a god, I’m not gonna lie,” said Kyrgios when asked about Djokovic at the trophy presentation. “I thought I played well… It’s been an amazing couple of weeks for me personally.

“Myself, my team, I think we are all exhausted, we’ve played so much tennis. I definitely need a well-earned vacation after this one. I’m just really happy with this result, it’s probably the best of my career. Maybe one day I’ll be here again.” 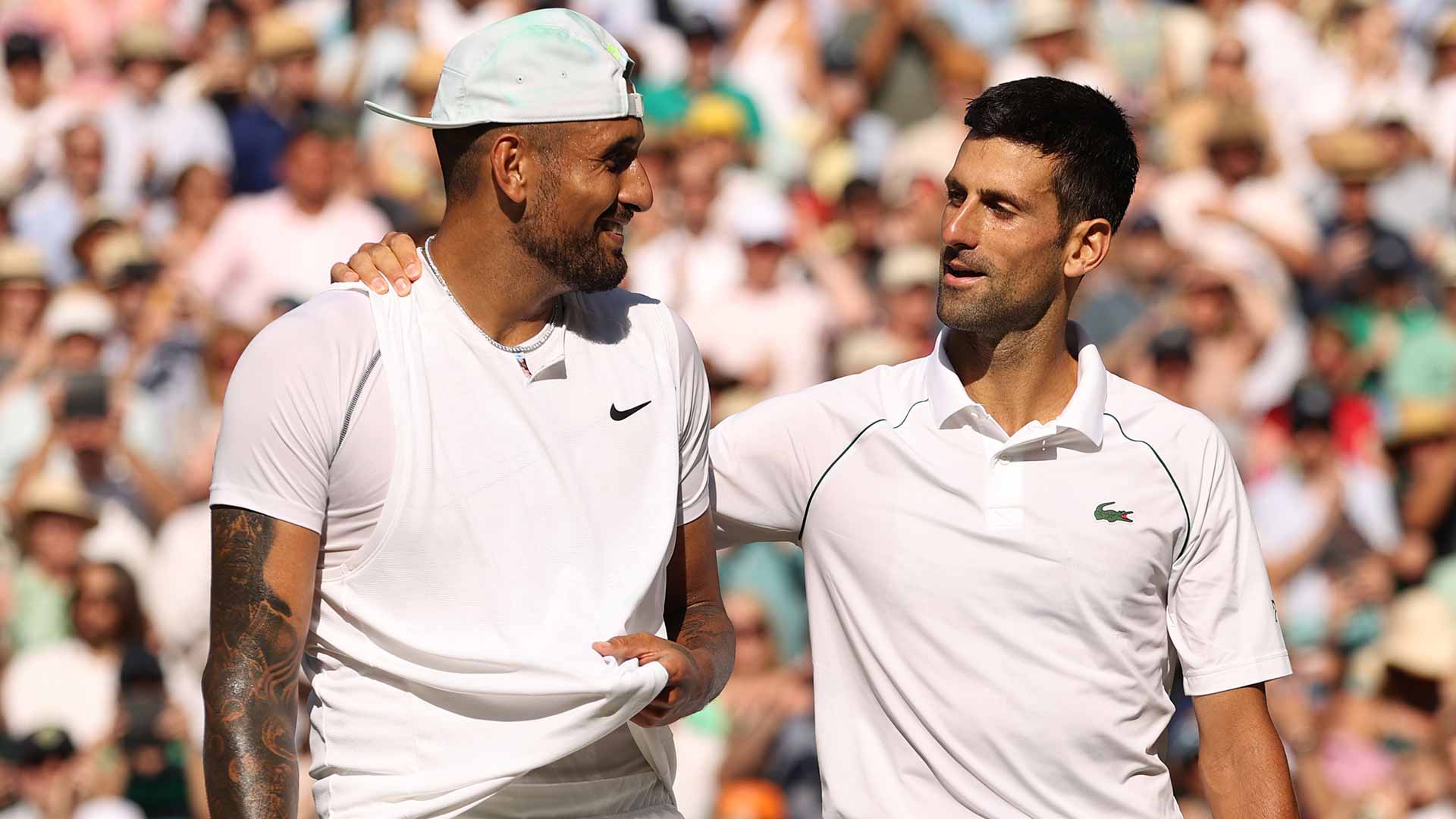 Kyrgios will be left to rue a high error count, particularly at key moments, as he struggled to find consistency with his aggressive approach. The Australian converted just one of six break point opportunities in the match and made 33 unforced errors to his opponent’s 17. Yet Djokovic acknowledged that the quality shown at times by the 27-year-old suggests Kyrgios is more than capable of adding to his maiden appearance in a Grand Slam final.

“Nick, you’ll be back,” said Djokovic as he addressed the Australian. “Not just at Wimbledon, but in finals. I know it’s tough to find words of consolation after a tough loss like this, but you showed why you deserve to be one of the best players in the world, particularly on this surface. Congrats to you and your team for an amazing tournament, I wish you all the best."

The 27-year-old Kyrgios showcased his trademark variety frequently in the early stages on Centre Court. He landed a 125 mph second-serve ace and used an underarm serve in his opening service game, before curling a stunning forehand down-the-line winner in the third game.

Kyrgios settled in quickly behind his huge serve in warm temperatures in London. He lost just five points behind his delivery in the first set, and a solitary break in the fifth game was enough for him to move ahead as Djokovic struggled to make an impact early in his eighth Wimbledon final. 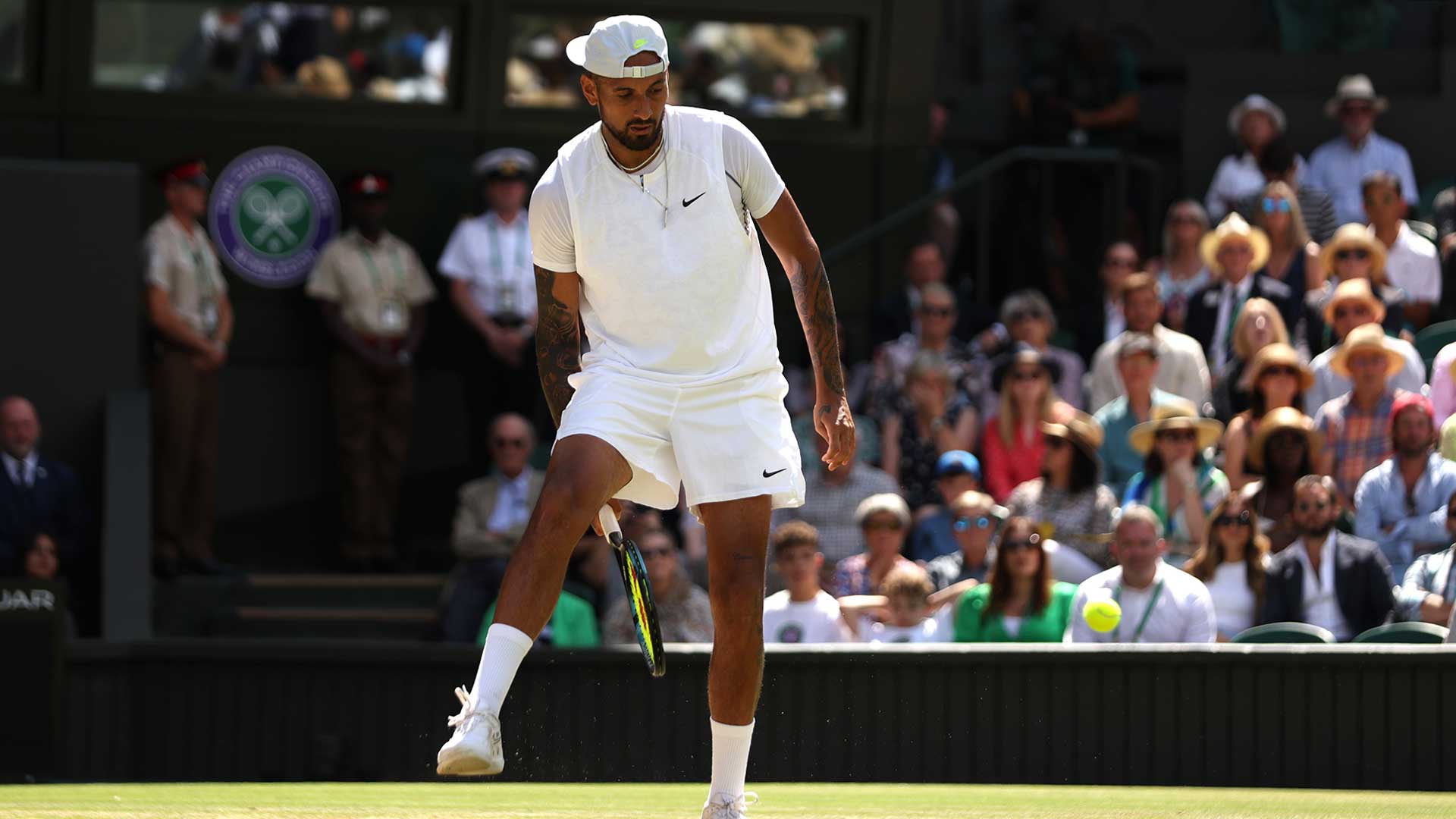 Djokovic, widely considered one of the greatest returners of all time, had been unable to break Kyrgios’ serve in either of the pair’s previous matches. The Serbian broke that duck in style early in the second set, however, breaking to love for 3-1 as he stayed typically resilient despite the early Kyrgios barrage.

That proved enough for the top seed to level the match, although Djokovic had to fend off four break points to serve out for the set in the 10th game.

Djokovic remained zoned in on return in the third set. The Serbian took Kyrgios to deuce in four of the Australian’s service games, as he hit cleanly through the ball on his backhand wing in particular. Although he was forced to be patient as Kyrgios found big deliveries at key moments, Djokovic rallied from 40/0 down in the ninth game to claim a crucial break as his masterful returning frequently pressured the Australian on Centre Court.

As the chatter from a frustrated Kyrgios to his player's box increased, Djokovic calmly wrapped up the set behind some precise serving to move within one set of his 21st Grand Slam title.

Kyrgios regained his dominance behind serve in the fourth set but was unable to make any inroads in his own return games as a composed serving performance from the top seed continued. As the set reached its climax, Kyrgios conceded a mini break with a double fault on the first point of the tie-break after gambling with a full-blooded second serve. So accustomed to handling big pressure moments in Grand Slam finals, Djokovic used that momentum to charge to an unassailable 6/1 lead on the way to retaining his title in south-west London.