The records keep flowing for Novak Djokovic! One day after clinching a seventh year-end No. 1 finish in the FedEx ATP Rankings, the Serbian claimed a record-breaking 37th ATP Masters 1000 crown when he avenged his US Open final loss to Daniil Medvedev in the final of the Rolex Paris Masters.

Djokovic, who shared an emotional embrace with children Stefan and Tara at the end of the court after match point, rallied to victory from a set down for the 14th time this season to capture his sixth Bercy title.

In a first Paris final to feature the top two players in the FedEx ATP Rankings since 1990, World No. 1 Djokovic overcame No. 2-ranked defending champion Medvedev 4-6, 6-3, 6-3 in two hours and 15 minutes.

“I went back and reviewed the final of the US Open to see what I did wrong and what I did right,” Djokovic told the Tennis Channel. “I tried to read the patterns of his serve and the ball toss, maybe. I tried to look for the small details, because it was a match of small margins. He started better, broke my serve in the first game and I came back. He served the first set out pretty comfortably, but I felt as if I was there.

"I thought it was only a matter of time when I was going to read his serve better, and start to make some plays. You can’t go through him. You have to find a way to play with controlled aggression, play the right shots at the right time and make him come in. It’s variety that wins matches against him. We both suffered on the court and there was a lot of gruelling rallies."

The 34-year-old secured year-end No. 1 for a record seventh time on Saturday, and with his 48th match win of a standout season (48-6) on Sunday he breaks a tie with Rafael Nadal for most Masters 1000 titles. Djokovic won 27 of 36 points at the net and struck 38 winners, dominating Medvedev in rallies under five shots (54 to 34).

When asked about his serve-volley tactics, Djokovic told the Tennis Channel, “He stands so far back in the court, so you try to open up the court with wide serves and come in. You still have to play some half volleys, some low volleys and come in, but you have the whole of the court to play with.”

Djokovic and Medvedev, who beat the Serbian in September's US Open final, will next head to Turin for the Nitto ATP Finals, to be held at the Pala Alpitour in Turin from 14-21 November. 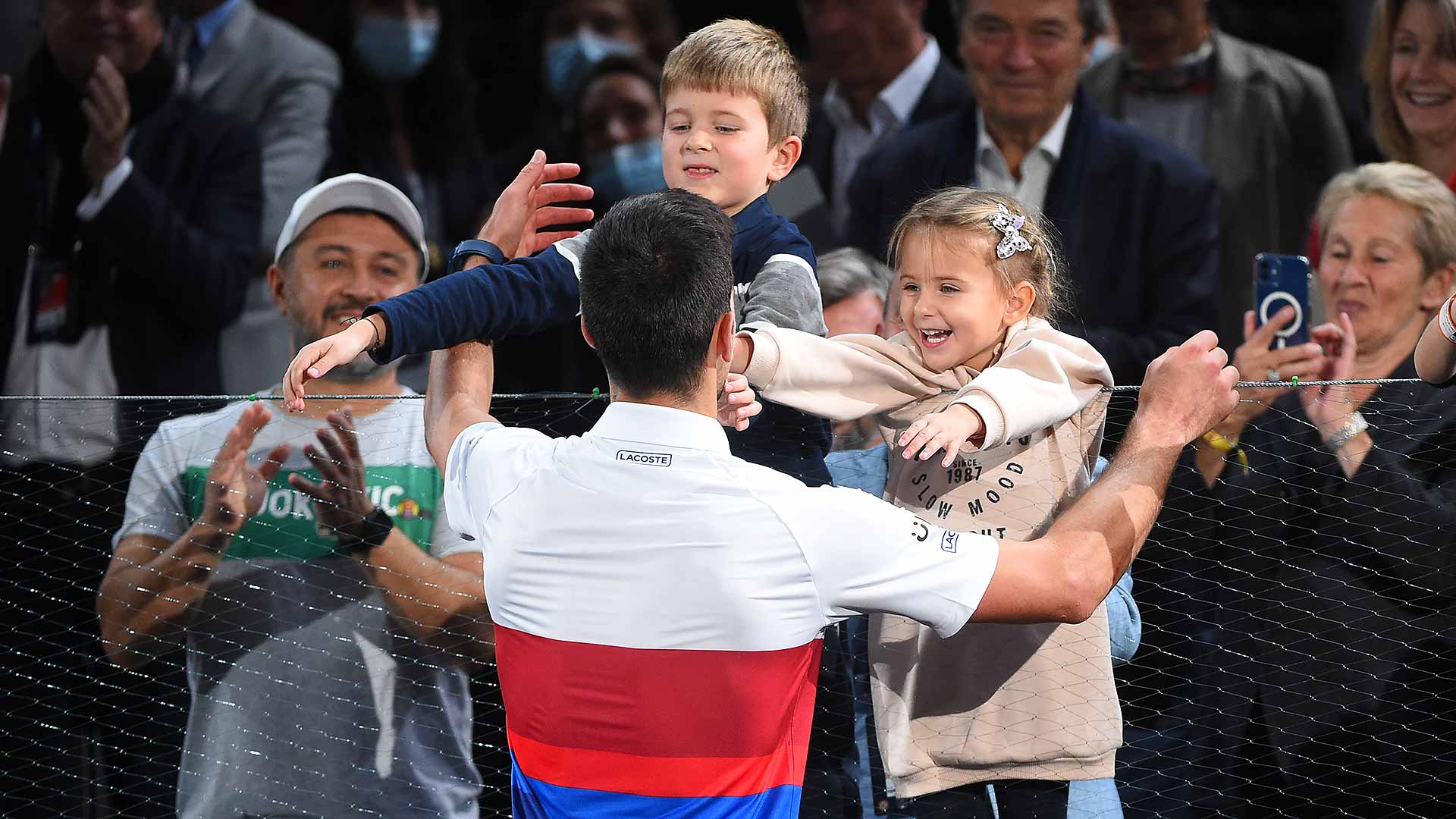 In a hard-hitting and physical encounter, Djokovic struggled initially, committing six unforced errors in the first two games, but settled and won the next three games. Medvedev’s consistency, which had made him a contender for year-end No. 1 in the FedEx ATP Rankings this season, was in evidence with his athleticism around the court. The Russian chased down a drop shot to break for a 4-3 advantage and later closed out the first set, before Djokovic gained the momentum.

In striking his backhand down the line, the World No. 1 avoided the backhand-to-backhand exchanges of the US Open final, which Medvedev won 6-4, 6-4, 6-4. After a series of brutal rallies in the fourth game of the second set, the Serbian grew in confidence and continued to mix up his game. At 5-3, Djokovic saved three break points with forays to the net and completed a 16-point game with an ace to take their 10th ATP Head2Head meeting match to a decider.

Medvedev came under mounting pressure at 2-2 in the deciding set, when he saw a 40/15 lead slip away. Djokovic got the better of the baseline exchanges and broke serve after Medvedev hit consecutive groundstrokes long. Djokovic won nine of the next 11 points to lead 5-3, 15/0, but then provided Medvedev with a glimmer of hope. A few minutes later, Djokovic broke once again for the 86th tour-level title of his illustrious career (fifth most in the Open Era).

Since the start of last year’s Paris tournament, Medvedev has compiled a 19-2 indoor record. Medvedev is now 54-12 on a career-best season that includes four titles.

It was the first Paris final to feature the top two players in the FedEx ATP Rankings since Stefan Edberg played Boris Becker in the 1990 final.