With Novak Djokovic admittedly not in top form, Tuesday's match at the Mutua Madrid Open presented Gael Monfils with a real chance to earn his first ATP Head2Head win against the World No. 1.

But in what has proved a comfortable matchup for the Serb over the years, he snuffed out any chance of that with a 6-3, 6-2 victory to improve to 18-0 against the Frenchman. With the win, Djokovic assures himself of a record-extending 369th week as World No. 1 next week; the injured Daniil Medvedev would have overtaken him atop the ATP Rankings if he lost in his Madrid opener.

The victory also made Djokovic the first man to hold an 18-0 ATP Head2Head record against an opponent in the Open era. Several matchups were tied at 17-0.

"I don't have any explanation for that, I just try to approach it like any other match,” Djokovic said of his record against Monfils. “I guess his game is suitable to my game in terms of playing style. But we've had some very close matchups. The last time we played in Dubai he had match points, so that could have easily broken the record.

"I don't think about that too much. For me mentally this is a very important win.”

Tuesday's meeting was only the pair's second on clay in their 18 matches, following a fourth-round match at Roland Garros in 2006. The slower surface made for plenty of entertaining rallies between two of the game's best shotmakers, but Djokovic was never truly threatened after saving three early break points. He did not face another break point until he saved two more on serving out the match.

The Serb took his only break point of the first set, then won both of his break chances in the second to ease to victory. Djokovic was the far steadier player, with Monfils more than doubling his unforced error count with 31. Monfils won the winner count, 18 to 11, producing his fair share of stunners, but Djokovic was always in control of the proceedings on Manolo Santana Stadium.

When he worked his way into offense during a point, Monfils' Conversion score of 60 per cent was competitive with Djokovic's 66 per cent, both players winning at least three of every five points in which they were in an attacking position.

But there was a gulf in the respective Balance of Power scores between the pair. Djokovic was in an attacking position 30 percent of the time while Monfils, who loves to dig in deep behind the baseline, played from attack just 12 per cent of the match. That number left the Frenchman well short of his clay-court average of 20 per cent in that metric. (Learn more about Balance of Power and Conversion & Steal scores.) 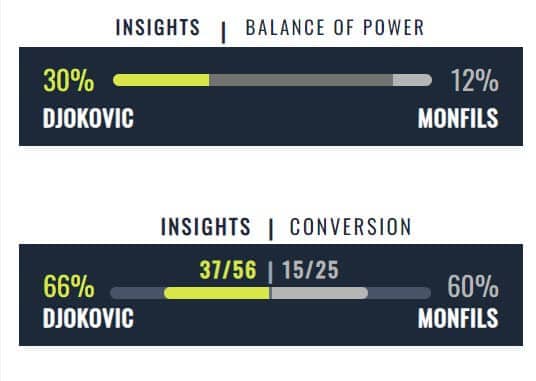 “I played one of the most athletic and quickest players that we have in the game,” Djokovic said. “I know his game very well. I know I have to always be ready that another ball will always come back from his part of the court, that you have to constantly try to have a controlled aggression… and dictate the point.

“I was moving well, dictating with the forehand side, moving him around the court and finding my serve [and] also the last few service games, [finding my] return.”

After going the distance in each of his past five matches, including four in his run to the Belgrade final last week, Djokovic will be pleased to get through in straight sets as he looks forward to a last-16 meeting with either 14th seed Denis Shapovalov or wild card Andy Murray.

That matchup will close Tuesday's play in Arantxa Sanchez Stadium.