World No. 1 Novak Djokovic completed a fifth career comeback from two-sets-to-love down on Monday for a place in the Roland Garros quarter-finals.

The 2016 champion, faced with the prospect of his earliest exit at the Paris major since 2009 (l. to Kohlschreiber in the fourth round), didn’t panic against Lorenzo Musetti in a 6-7(7), 6-7(2), 6-1, 6-0, 4-0 victory, which ended after three hours and 27 minutes on Court Philippe-Chatrier when the #NextGenATP Italian retired. Djokovic is through to the last eight for a record 12th consecutive year.

You May Also Like: Down Two Sets, Djokovic Says: 'I Was More Nervous At The Start'

The Serbian superstar came through his first major test at this year’s Roland Garros, winning 13 games in a row from a 3-1 advantage in the third set to a 4-0 lead in the decider. Musetti, who had won 85 points through the first two sets (44, 41), earned just 17 for the remainder of the match as his hopes ended of becoming the eighth man in the Open Era to reach the quarter-finals on his Grand Slam championship debut.

Djokovic, who has a 24-3 record on the season, which includes a ninth Australian Open crown (d. Medvedev) and also the 83rd title of his career at the Serbia Open (d. Molcan), will next challenge ninth-seeded Italian Matteo Berrettini on Wednesday. Djokovic, the 18-time Grand Slam champion, beat Berrettini 6-2, 6-1 in their only previous ATP Head2Head meeting at the 2019 Nitto ATP Finals.

“[He has a] big serve, big forehand – two big weapons,” said Djokovic. “He's in form. He finished the last year very strong. He started this year strong as well, beating Dominic Thiem in Australia, playing [a] really good ATP Cup. He just has so much firepower in his game. [I will] need to be at [my] best in order to have a chance to win.” 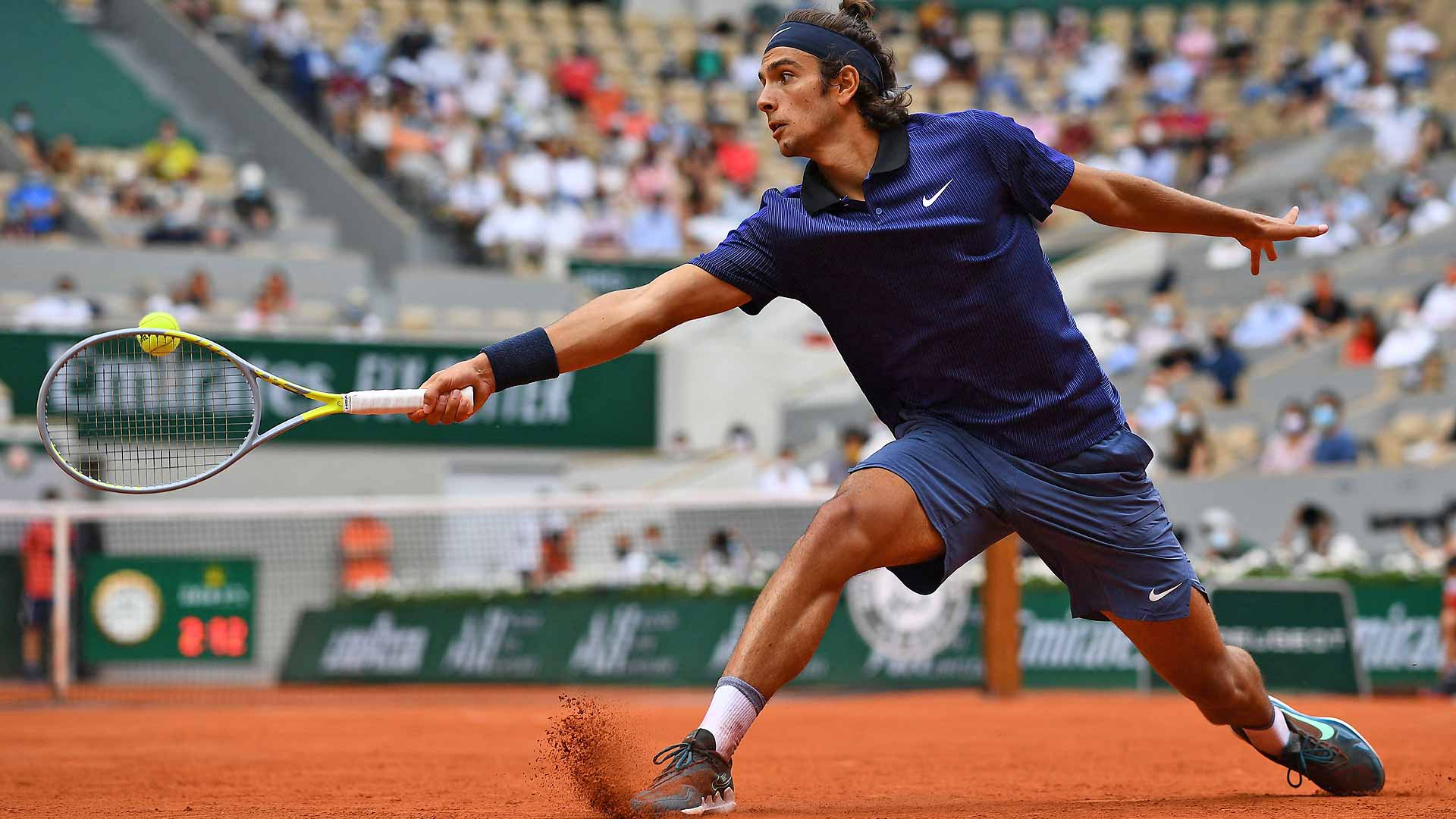 Musetti, who began slow-balling to Djokovic's forehand, struck 25 winners through two sets and looked so composed in the biggest match of his career. With his single-handed backhand holding up in baseline rallies, the World No. 76 won the first four points of the second-set tie-break, which included a mental error from Djokovic when the Serbian let a ball go at 0/2. Djokovic regrouped and won 28 of 30 points from 3-1 in the third set to a 4-0 lead in the fourth set.

Musetti, who is now 16-9 on the season, has reached two ATP Tour semi-finals this year at the Abierto Mexicano Telcel presentado por HSBC and at the Open Parc Auvergne-Rhone-Alpes Lyon (l. to Tsitsipas both times). Djokovic has lost one Grand Slam match to a player ranked as low as Musetti. The Serbian fell to No. 117-ranked Denis Istomin in the 2017 Australian Open second round.

Djokovic gained the first break with a crosscourt backhand winner, but let Musetti back into the match in the fifth game. Musetti saved one break point by wrong-footing Djokovic at 3-4, 30/40 and from 1/4 down in the tie-break, the Italian won four of the next five points. Djokovic saved two set point at 5/6 and 6/7, but Musetti came up with a big forehand winner at the third time of asking.

If Djokovic thought Musetti would let up, he soon found out that the answer was no! Musetti continued to feed no pace to the Serbian star’s forehand and took a 3-1 lead in the second set after Djokovic hit a forehand wide. Djokovic tightened up his game to win two straight games, but flashy shot-maker Musetti came within a point of a 5-3 advantage only to strike a looping forehand long. Through to the tie-break, Musetti highlighted his potential with a number of groundstroke winners. The Italian teenager is now 10-0 this year in tie-breaks.

The momentum of the match started to shift in Djokovic's favour after both players left the main stadium court at the end of the second set. Upon the resumption of play Djokovic won the first six points. Hitting through his forehand better, the feel of the match changed once the World No. 1 took a 3-0 lead. He won 12 of the final 14 points to clinch the third set in 23 minutes, and with errors creeping into Musetti's game, Djokovic immediately took control of the fourth set.

Having won 44 points in the first set and 41 points in the second set, Musetti won a total of 14 points in the next two sets and appeared to struggle for mobility in the decider. Things were going Djokovic's way to such an extent that he won the first point of the fifth set after falling to the court and hitting a winner.

"I came here to play my first Grand Slam in the main draw, and I made second week taking two sets against the World No. 1," said Musetti, who retired due to cramps and lower back pain. "I think I [will] take away a lot of feelings, a lot of emotions, but [also] a lot of experience. Now I know how can I play, how far I am from the [best players] on the Tour, like Nole. So I know that if I play good I can stay at this level. I will go home, rest a bit, and work for Wimbledon."