"I am trying to make the most of my career, trying to use this time when I feel that I am physically, mentally, emotionally, game-wise at [my] peak and playing some of the best tennis that I have ever played," Djokovic said. "Going on an unbeaten run so far this year obviously brings even more confidence each match."

It wasn’t easy for the Serbian, though. Djokovic got off to a sluggish start in the first set less than 24 hours on from a gruelling three-hour, one-minute semi-final against Roberto Bautista Agut. The top seed had to dig deep to find his best form, clinching his 80th tour-level title after two hours.

"I would like to thank my team for hanging in there. Tough match yesterday, three hours," Djokovic said during the trophy ceremony. "I would like to take this opportunity to say hello to all the Cincinnati fans and tennis fans around the world. We miss you guys. It feels quite strange to be in these conditions and circumstances, but we all hope for a better tomorrow and you are one of the biggest reasons why we play professional tennis, so hopefully we can see you very, very soon." 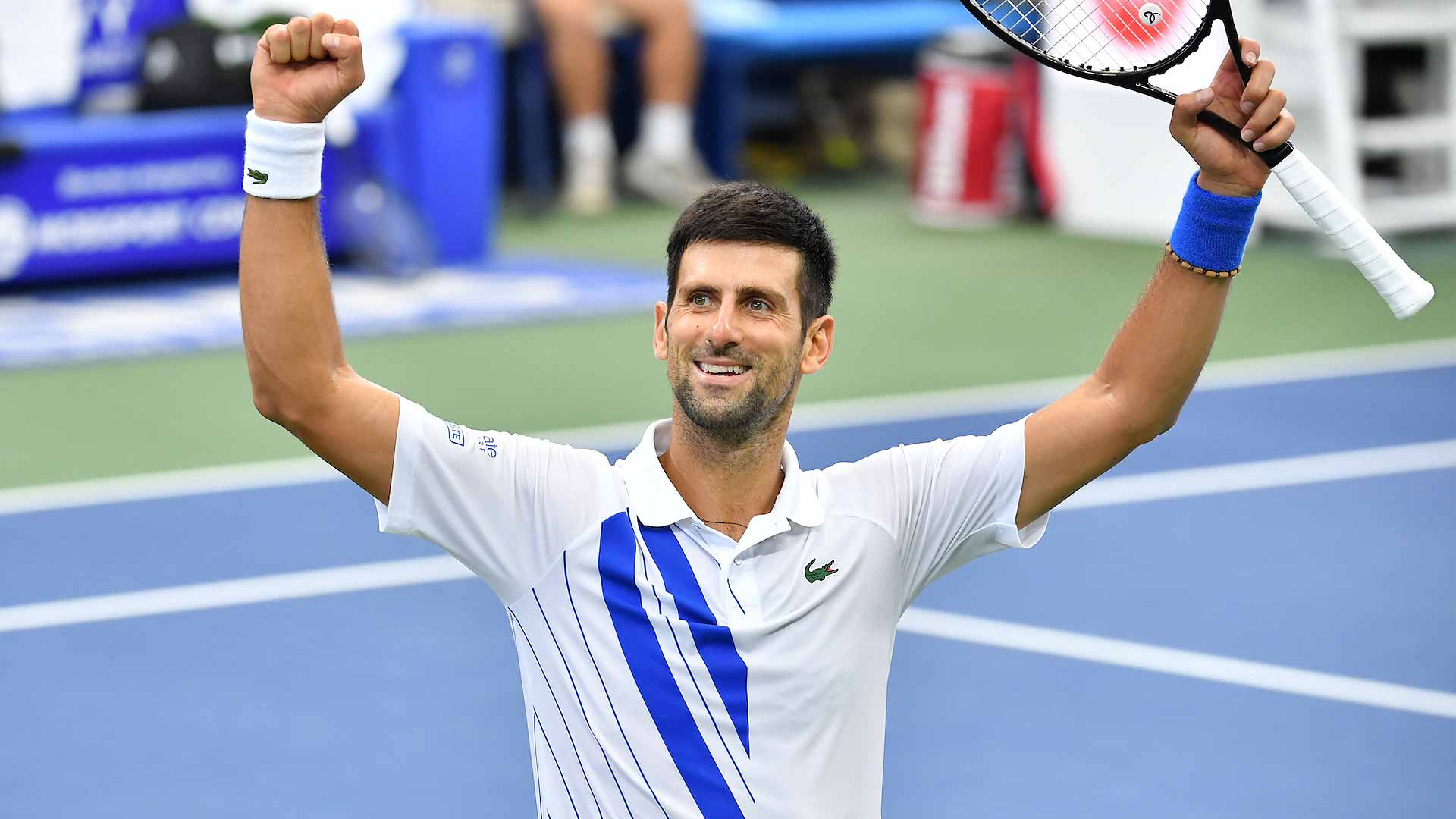 Djokovic entered the match with a 10-0 ATP Head2Head series lead against the former World No. 3, with eight of his previous victories coming in straight sets. But the top seed struggled to work his way into rallies in the opening set.

Raonic came out firing, playing aggressively with his forehand and pressuring the top seed with his booming serve, using the body serve to elicit weak replies. Djokovic double faulted at 1-4 to give Raonic a double-break, and the Canadian closed out the set without facing a break point.

"The first set obviously he was playing great, I made some double faults, handed two breaks to him," Djokovic said. "It's always hard playing Milos. He has one of the best serves in the game, puts so much pressure on your service games. He steps in, he's going more for his shots from the back of the court."

But like he did against Bautista Agut, Djokovic dug into Louis Armstrong Stadium and began to find his stride. As the favourite put more returns into play and started to neutralise the 6'5" right-hander's serve, Raonic began to misfire from the baseline. The forehands that beautifully opened up the court in the early going were suddenly missing their target. The Canadian was also made to run more rather than exclusively dictating.

There was a twist in the plot at the start of the decider, when Raonic broke in his first return game for a 2-0 lead. Entering the match, the Canadian had won 55 of his 57 service games (96%) for the week (96%), signaling trouble for Djokovic.

But once again, Djokovic raised his level under pressure, earning a “boomerang break” to get right back on serve. Then the Serbian tightened his grip on the momentum by breaking in his second consecutive return game. He played an incredible scoop forehand from deep in the court — a ball most players would not have retrieved — to keep a point alive, letting out a massive roar when Raonic made an error on the next shot.

The ending was not straightforward, though. Raonic crushed a backhand down the line to earn a break point as Djokovic served for the match at 5-4. The Serbian hit a 69 mph second serve, giving the former World No. 3 a chance to work his way into the point. But after a few balls back and forth in the ad court, Raonic smothered a forehand into the net. Two points later, the unseeded Canadian sailed a forehand long and Djokovic lifted his arms in celebration.

It was a difficult week for Djokovic. He needed mid-match visits from the trainer for a neck adjustment in the second round against Ricardas Berankis and the semi-finals against Bautista Agut. But nevertheless he lifted the trophy in the first tournament since the ATP Tour was suspended due to COVID-19 in March. He will now have 48 hours' rest before opening his US Open campaign inside Arthur Ashe Stadium Monday evening against Damir Dzumhur.

"In the past three, four days, I struggled a little bit with my physical condition, but I managed to pull this one through," Djokovic said on court. "It was a very close encounter all the way through the last shot. It was anybody's game."

Raonic was trying to win the biggest title of his career. A victory would have made him the first Canadian to earn Masters 1000 glory. He is now 0-4 in finals at this level.

"What is that, 23-0?" Raonic asked Djokovic during the trophy ceremony. "Honestly if I start the year off 3-0, I'm pretty happy."

"It's great to have tennis back after such a long lay-off around the world, being devastated by COVID. It's great to have a lot of sports back and I'm wishing all the best to the people that were most closely affected by it all over the world, wherever they may be. I keep them in my prayers."

Did You Know?
Djokovic is the first World No. 1 to win the Western & Southern Open since Roger Federer in 2012.