ATP Staff
This article contains:
World No. 1 wins 15th major to move into third on the all-time list

In 1993, Novak Djokovic was in Kopaonik, a city in the mountains of southern Serbia. Nobody in his family had ever touched a tennis racquet. But he remembers at six years old watching Pete Sampras clinch his first Wimbledon title.

Tennis might not have been in Djokovic’s blood, but witnessing that moment planted a dream in his mind. How cool would it be to do that one day?

Sampras tallied 14 Grand Slam titles, making him the all-time leader in major trophies when he retired in 2002. But seventeen years later, Djokovic’s dream has become more than a reality. The Serbian dominated Rafael Nadal in straight sets in the Australian Open final on Sunday evening to claim his 15th Slam victory, surpassing Sampras to move into third on the all-time list.

“It was definitely a sign of destiny to start playing tennis, to aspire to be as good as Pete,” Djokovic said, reflecting on watching the American as a child. “To surpass him with Grand Slam titles, I'm speechless.”

But that’s not the only history the World No. 1 made with his stunning performance against the second seed. Djokovic now stands alone in the record books with seven Australian Open victories, breaking a tie with Roger Federer and Roy Emerson. After the match, Djokovic met with a host of Aussie legends — Emerson, Rod Laver, Ken Rosewall and Frank Sedgman — who congratulated him on his triumph. 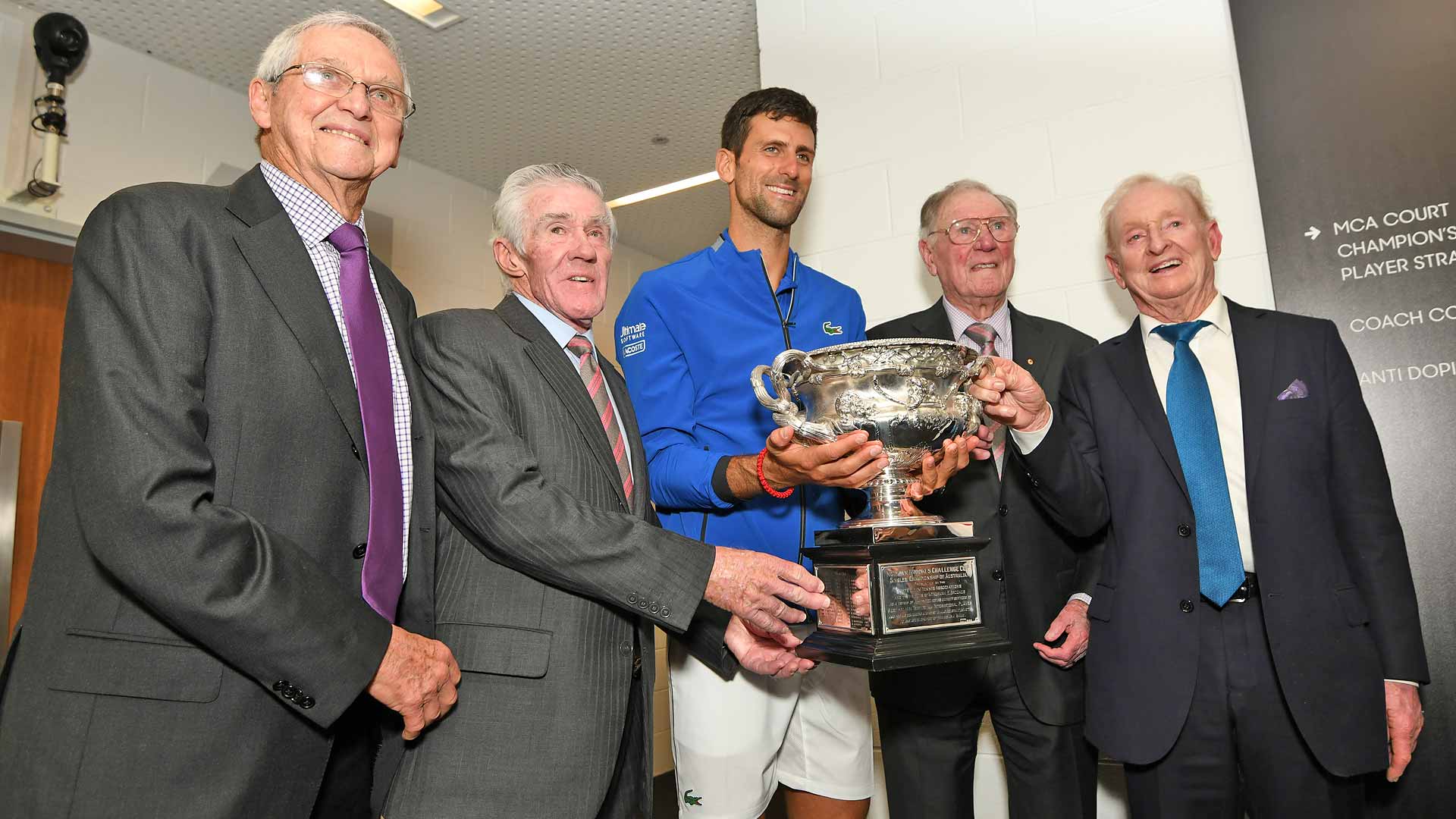 “Mr. Emerson said he's pissed with me because I broke his record,” Djokovic said, cracking a smile. “It was the most beautiful, most expensive photo of the night, without a doubt, standing with those four legends... I'll definitely cherish that forever.”

It’s hard to believe that at this time last year, Djokovic was at perhaps his lowest low. A vexing right elbow injury forced the right-hander to undergo surgery after a fourth-round loss at the Australian Open. And by May, he owned just a 6-6 record for the season, at one point losing three matches in a row. That was something he had not done in more than a decade.

But ironically, Djokovic's breakthrough came against Nadal in a five-set classic in the Wimbledon semi-finals. That, as he has said, was the turning point. Djokovic would emerge victorious at SW19, complete his Career Golden Masters in Cincinnati, lift the US Open trophy and now he has returned to the Melbourne pedestal.

Djokovic is very much back on top of the tennis world. And on Monday, he will hold a 2,635-point lead over No. 2 Nadal in the ATP Rankings. One can argue this Australian Open was his most impressive performance during his comeback. The final was his 22nd FedEx ATP Head2Head meeting against Nadal that lasted at least three completed sets. And of all those clashes, this was the shortest. Djokovic struck just nine unforced errors under the utmost pressure to defeat Nadal in just two hours and four minutes. The Spaniard had not lost a set entering the championship match.

For now, Djokovic will relish the moment. But while the Serbian admits they remain far away, Nadal’s 17 Grand Slams and Federer’s 20 are well within reach.

“I am aware that making history of the sport that I truly love is something special. Of course, it motivates me. Playing Grand Slams, the biggest ATP events, is my utmost priority in this season and in seasons to come,” Djokovic said.

“I do want to definitely focus myself on continuing to improve my game and maintaining the overall well-being that I have mentally, physically, emotionally, so I will be able to compete at such a high level for the years to come, and have a shot at eventually getting closer to Roger's record.” 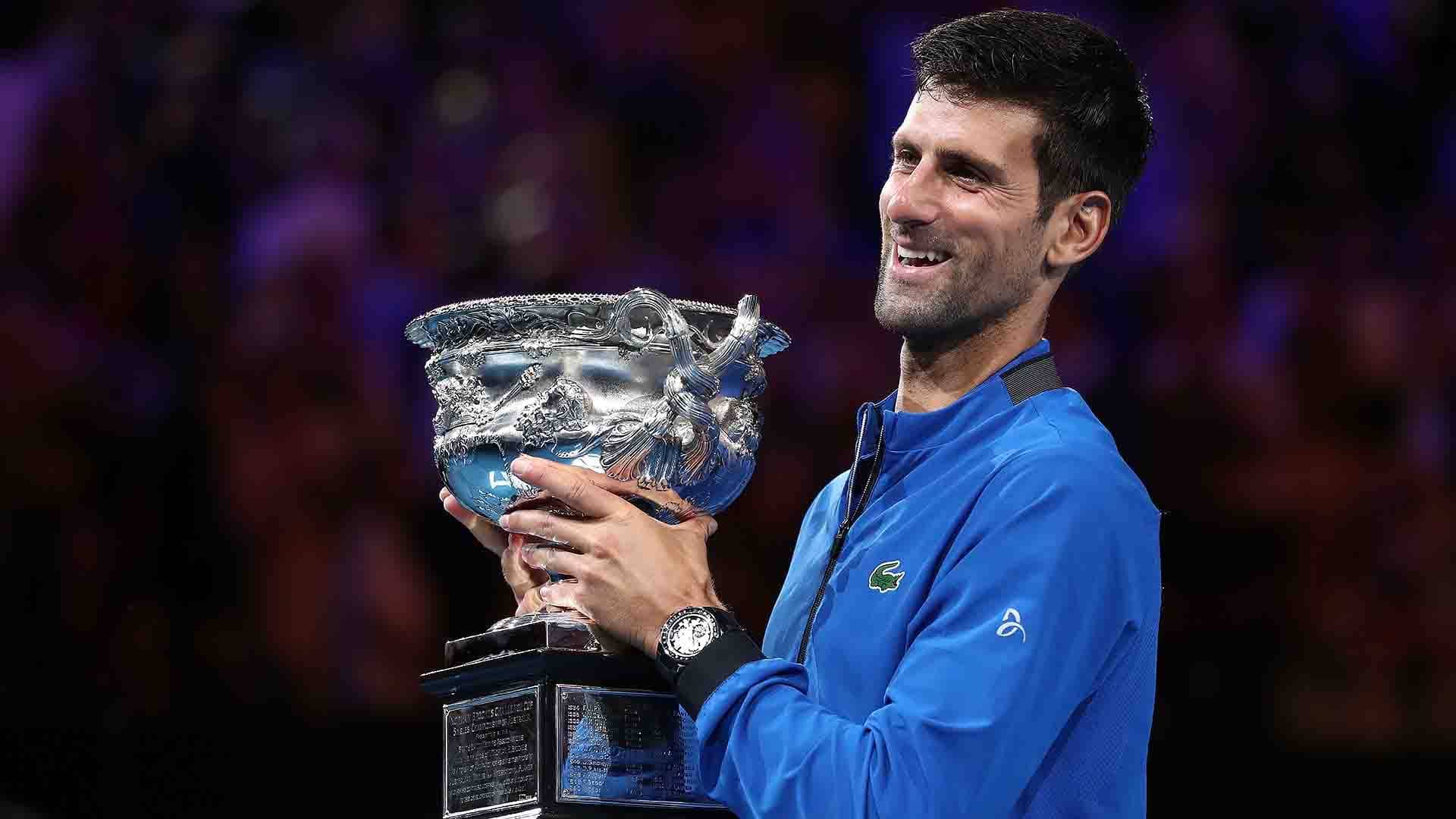 Last year, Djokovic left Melbourne after a shocking loss. This time, he departs after an exhilarating victory.

“I wasn't playing well, I wasn't feeling good on the court, I was questioning everything, I was doubting whether I will be able to play everyone on this level because I didn't know to what extent the operation of my elbow would affect my game.

“It was a huge learning curve for me, just the whole process was very special. I embraced the journey. I am very grateful to go through it. I would never change anything if I could turn back the time because things are just the way they should be.”

At the end of the day, this was all once just a dream. Djokovic was a little boy in Serbia, with no tennis ties in his family, watching Sampras on television. Now Djokovic is the star that children throughout the world are watching through their screens, dreaming of becoming like him one day.

“I just have to be conscious of that and understand that I'm blessed.”