Novak Djokovic and Diego Schwartzman will meet for the second straight year at the Internazionali BNL d'Italia.

When Novak Djokovic and Diego Schwartzman meet for the fifth time in their ATP Head2Head series (Djokovic leads 4-0) in Monday’s Internazionali BNL d’Italia final, both players will not only be fighting for the Rome trophy, but also a personal milestone.

Following the completion of his second Career Golden Masters at the Western & Southern Open last month, Djokovic is the joint Masters 1000 titles leader alongside fellow 35-time champion Rafael Nadal. The Rome final presents Djokovic with an opportunity to overtake his rival by lifting a 36th trophy at the level.

On the other side of the net, Schwartzman is one win away from cracking the Top 10 in the FedEx ATP Rankings for the first time in his career. The Argentine can achieve the feat by defeating Djokovic for the first time to claim his maiden Masters 1000 trophy.

Djokovic has dropped just one set en route to his 10th final in the Italian capital, improving his match record to 30-1 this year. The 33-year-old has been tested throughout the week in each of his three most recent clashes in Rome. 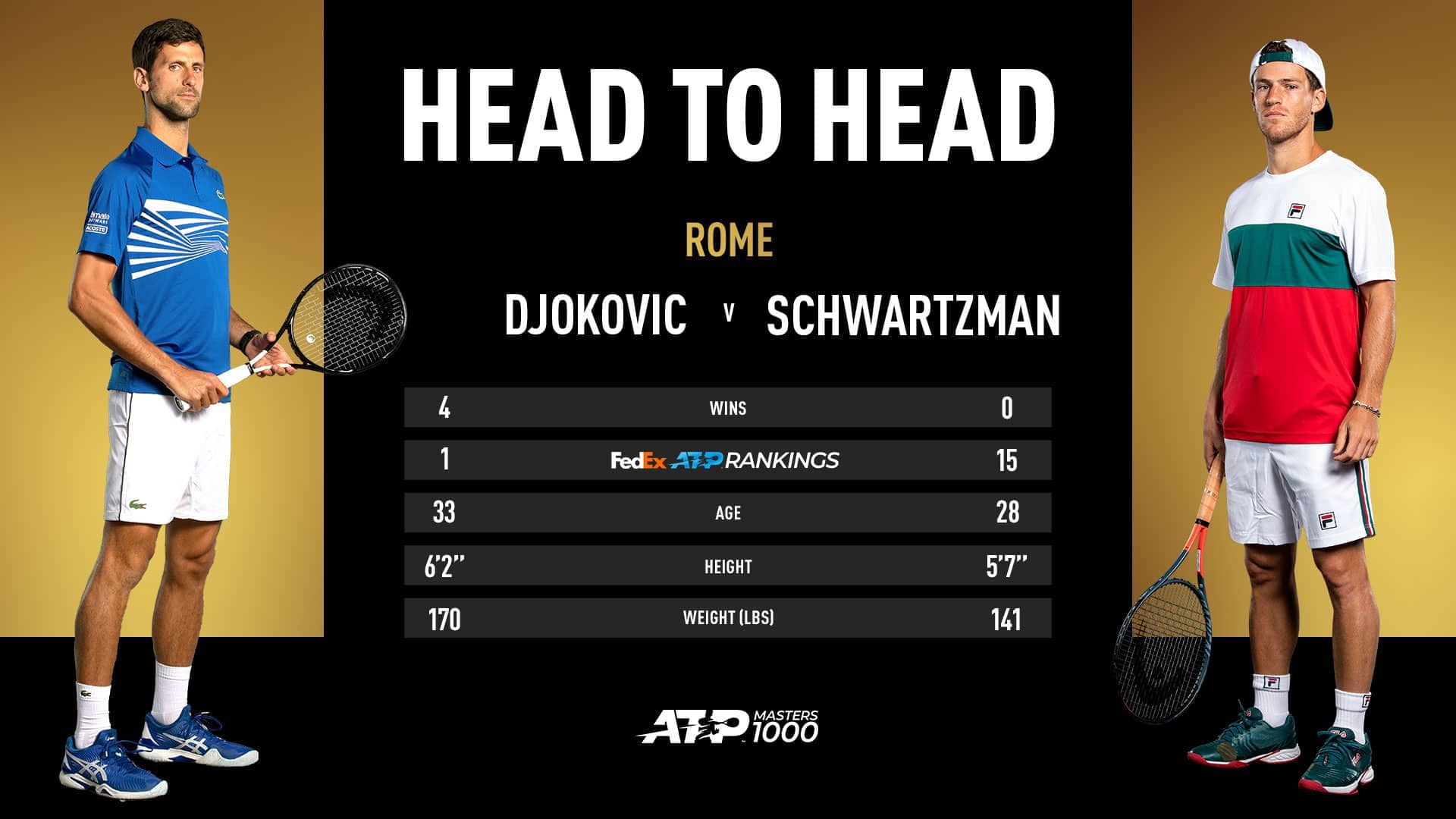 Djokovic played an 87-minute set against Filip Krajinovic in the third round, survived a three-set quarter-final battle against Dominik Koepfer and saved two set points in the first set of his semi-final clash against Casper Ruud. The Serbian has consistently produced his best level under pressure to close in on a fifth trophy at the Foro Italico.

An opportunity to overtake Nadal and make further history in Rome are huge motivational factors for the World No. 1. The four-time champion is still as ambitious as he was the first time he arrived at the tournament, where he has enjoyed consistent success since 2007. Djokovic has reached the quarter-finals or better in each of his 14 appearances at the Foro Italico.

“The 1000 Masters events are as important as it gets on the Tour,” said Djokovic. “These are the events where I want to perform my best other than Grand Slams and the [Nitto ATP Finals]… Finals at such big events mean a lot even after 15 years [of] being on the Tour. I still am as motivated to get my hands on the trophy. This is what I work for as much as anybody else, really, on the Tour.”

Standing between Djokovic and the Masters 1000 titles record is a first-time finalist at the level: Diego Schwartzman. Djokovic enters the contest with a 4-0 ATP Head2Head record against the 28-year-old, but will be well aware of the threat the Argentine poses. The pair met in the semi-finals at this event last year, with Djokovic eventually prevailing in three sets after two hours and 31 minutes.

Djokovic will face an opponent with peak confidence levels on Centrale. Schwartzman dropped just one set en route to the quarter-finals, where he earned his first victory in 10 matches against nine-time champion Rafael Nadal. Schwartzman described the straight-sets win as his “best match ever” and his final opponent was equally impressed.

“Diego played the match of his life [against Nadal]… He was so impressive,” said Djokovic. “And that proves that anything is possible, even [against] Nadal who is probably the toughest challenge in our sport, playing Nadal on clay. But he managed to win in straight sets, so that proves his quality.”

The opportunity to enter the Top 10 for the first time and lift the biggest title of his career with a single victory perhaps makes Monday’s final the biggest match of Schwartzman’s career. The World No. 15 is prepared to push himself to the limit to realise two dreams at the Masters 1000 tournament.

“I have two dreams tomorrow. One is winning a tournament like this and the second one: be Top 10,” said Schwartzman. “Both are there tomorrow on court against Novak. I know it's very difficult. I almost need to play more than my 100 per cent.

“I don't want to say impossible, because it's not impossible. I know can beat him. But it's going to be very difficult. But the chances are there tomorrow… I'm going to do everything to be more than my 100 per cent tomorrow on court.”

After his victory against Nadal, Schwartzman was able to maintain his level and earn another milestone win just 24 hours later on Centrale. The Argentine trailed by a break on three occasions in the deciding set of his semi-final clash against Denis Shapovalov, but fought back to claim a memorable final-set tie-break win after three hours and 15 minutes.

“At the end, maybe the third set we were playing for many things: for the final, for the Top 10, for the match… The nerves were there. It was difficult,” said Schwartzman.

“But I think I took my chances when he was thinking about [the] win and nothing else, when he was serving for the match and [a] break up in the third.”

Having already ended a winless streak against Nadal, Schwartzman will now attempt to do the same against Djokovic. The rewards for victory in Rome are clear to both men. But who will be able to take their chance on Monday and place their name in the history books?