Novak Djokovic improves to 6-2 in his ATP Head2Head series against Alexander Zverev.

Serbian to face Karatsev in semi-finals

Novak Djokovic survived another major test at the Australian Open on Tuesday, as he overcame Alexander Zverev 6-7(6), 6-2, 6-4, 7-6(8) in three hours and 30 minutes to reach his ninth semi-final at Melbourne Park.

Djokovic saved nine of 12 break points, including a set point at 5-6 in the fourth set with an ace, to earn his sixth ATP Head2Head victory in eight matches against Zverev. The 33-year-old has now won 11 straight matches against Top 10 players at Melbourne Park, dating back to his quarter-final loss to eventual champion Stan Wawrinka in 2014.

“Down to the very last shot, it was anybody’s game, anybody’s match,” said Djokovic, in an on-court interview. “[There were] a lot of nerves out there, a lot of pressure. Emotionally, [I] feel a little drained, honestly. It was a great battle. Congratulations to Sascha for a great tournament and a great battle today. Tough luck today, but we pushed each other to the limit.”

This is Djokovic’s second comeback win against Zverev on Rod Laver Arena this year. Just 11 days ago, Djokovic outlasted the 2018 Nitto ATP Finals champion 6-7(3), 6-2, 7-5 in Serbia’s 2-1 loss to Germany at the ATP Cup.

Djokovic has survived back-to-back four-set encounters since suffering an abdominal injury in his five-set victory against Taylor Fritz last Friday. The 17-time major champion is now two wins away from joining 13-time Roland Garros titlist Rafael Nadal as only the second man to claim nine or more titles at the same Grand Slam event. Djokovic is also aiming to narrow the gap on 20-time Grand Slam winners Nadal and Roger Federer.

You May Also Like: World No. 114 Karatsev's Historic Run Continues Into Australian Open SFs

Djokovic made a slow start to his 48th Grand Slam quarter-final (39-9), as he committed multiple double faults and forehand errors to drop serve in the opening game of the match. Zverev overpowered the eight-time champion from the baseline to earn a set point at 3-5, but Djokovic stepped inside the court and ripped a backhand winner down the line to stay in contention.

Despite failing to serve out the set at 5-4, Zverev continued to play with an aggressive mindset in the tie-break. The German capitalised on poor shot selection from Djokovic at 6/6, as he chased down a drop shot to earn his third set point with a powerful overhead. Zverev fired a strong body serve to force Djokovic into a forehand return error and clinch the opener.

Djokovic responded immediately in the second set, as he forced Zverev behind the baseline with deep returns and significantly reduced his unforced error count. The top seed dropped three points in the opening four games and soon levelled the match with an ace down the T. Djokovic struck 23 unforced errors in the opening two sets. Only two of those were committed in the second set.

“After [the first set], I just felt I started moving better, playing better,” said Djokovic. “I served extremely well. I had slightly more aces than him (23 to 21) which, for me, is a miracle [when] playing against a big server like Sascha.”

There was a sense of first-set déjà vu at the start of the third set, as Djokovic lost his opening service game with a forehand error and a double fault. Unlike the first set, Djokovic was able to recover. From 2-4, 0/30 down on Zverev's serve, Djokovic won 16 of the next 18 points to take the third set. The 33-year-old capitalised on Zverev’s first two double faults of the match to recover the break and he showed greater consistency in extended baseline rallies turn the set in his favour.

Zverev continued his trend of early breaks in the fourth set. The German found his targets as Djokovic rushed the net and he fired a strong forehand up the line to break serve. But Djokovic showed his fighting spirit once more to book his place in the final four. Djokovic escaped from a combined five break points at 0-3 and 3-4 with all-out aggression and saved a set point at 5-6 with an ace to reach a tie-break. The six-time year-end World No. 1 forced Zverev into an error at the net to claim the only mini-break of the fourth-set tie-break at 6/6 and he converted his second match point with an ace down the T.

Zverev, who had been bidding to reach the Australian Open semi-finals for the second consecutive year, was disappointed that he couldn’t capitalise on his chances.

“[There were] maybe too many mistakes, easy mistakes,” said Zverev. “But it's one of the most difficult things, holding your serve against Novak in our sport. [I'm] very upset with the result.

“For me, the most upsetting parts in the third and fourth sets were actually not losing my serve, but not getting the second breaks. Because I had chances in both those sets [and] that would have changed things a lot. It was a great match. I think we both played well [and] I think we played an extremely physical match.” 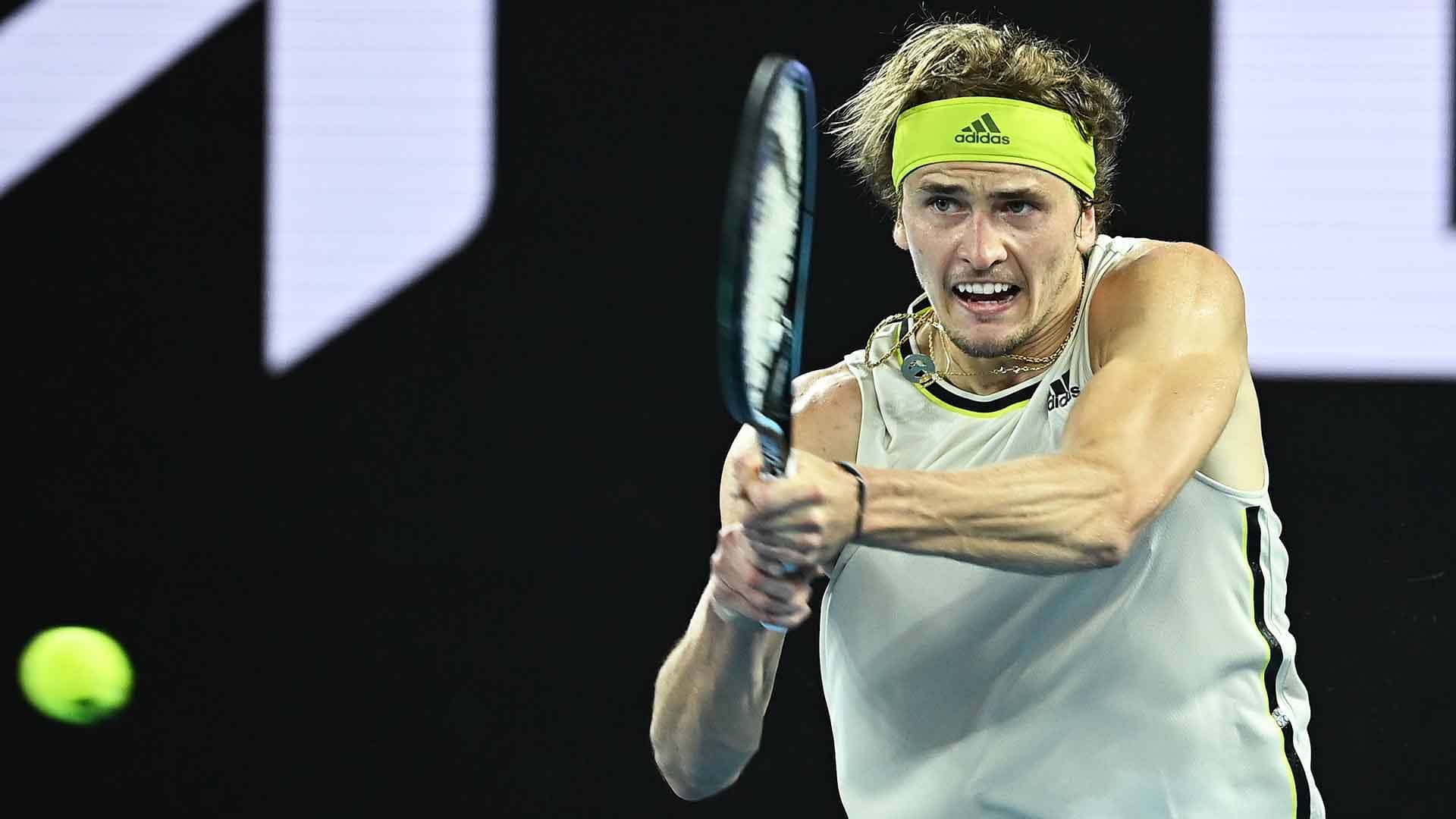 “Other than the second set, I started pretty poorly [in] all the other three sets,” said Djokovic. “I lost my service very early in the first, third and fourth [sets] and just allowed him to swing through the ball a bit more. I regained my focus after I broke my racquet [in the third set] and things started to shift a little bit for me in a positive direction. If he won this match, it definitely wouldn’t be undeserved. He was playing really well. It was anybody’s game and I am just really glad to overcome such a challenge.”

Djokovic will meet Grand Slam debutant Aslan Karatsev for a place in the championship match. The 27-year-old defeated Grigor Dimitrov 2-6, 6-4, 6-1, 6-2 to become the first player in the Open Era (since 1968) to reach the semi-finals in his maiden major championship appearance. Djokovic will aim to extend his unbeaten 16-0 record in semi-final and final matches when he meets Karatsev for the first time at Melbourne Park.

“To be honest, I hadn’t seen [Karatsev] play at all before the Australian Open,” said Djokovic. “Of course, I have seen him play during the Australian Open… He is a very strong guy. Physically, he is just very strong. He moves well [and] just has a lot of firepower from the back of the court. [He has a] great backhand. [He is straight] from the Russian school of tennis, [they] always have great backhands. He serves well and he is motivated. He has nothing to lose.”

Did You Know?
This is the ninth time Djokovic has reached the Australian Open semi-finals. On the eight previous occasions the Serbian has advanced to the final four at Melbourne Park, he has lifted the title.