Roberto Quiroz and Nicolas Jarry have fun at Mitad del Mundo ahead of the Ecuador Open in Quito. 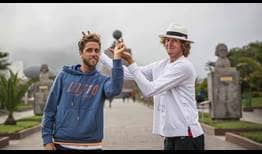 Gael Monfils, Roberto Quiroz, Dorian Descloix and Nicolas Jarry learn how cacao is turned into chocolate ahead of the Ecuador Open in Quito. 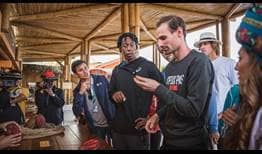 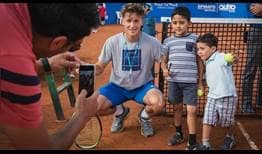 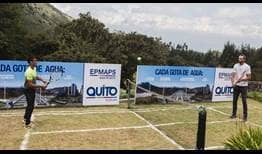 Gael Monfils and Mayor of Quito Mauricio Rodas had a light hit in front of a packed crowd ahead of the Ecuador Open. 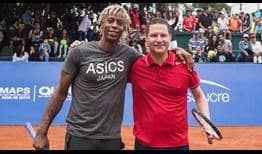 Rogerio Dutra Silva and Ivo Karlovic, who feature in the top quarter of the draw, will both be aiming for a first Ecuador Open title in Quito. 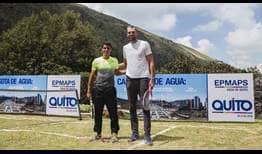 Tennis players are always at the center of the ATP World Tour’s world. But this week at the Ecuador Open in Quito, the country’s capital, the competitors paid a visit to the actual center of the Earth at the equator.

Gael Monfils, his doubles partner Dorian Descloix, No. 1 Chilean Nicolas Jarry and home favourite Roberto Quiroz — the No. 1 player from Ecuador — played mini tennis on the equator during a visit to the Mitad del Mundo on Monday, where government officials presented the quartet with sombreros de paja toquilla — Ecuadorian hats.

You May Also Like: Karlovic, Dutra Silva Hit New Heights In Quito

All of the players attempted to do something that cannot be done except on the equator: balancing an egg on a nail. Only Jarry was successful with his effort, but all of the stars had a blast trying. They also learned how cacao is turned into chocolate and performed ‘Limpia’, a spiritual ritual led by a Shaman that is meant to release bad energies.

They will hope that pay dividends this week in Quito, with the first ATP World Tour clay-court title of the season on the line.