#NextGenATP Briton Jack Draper earned the second ATP Masters 1000 win of his season and career on Sunday at the Mutua Madrid Open. The 20-year-old wild card was a 6-4, 6-3 winner over World No. 27 Italian Lorenzo Sonego.

Draper dropped serve just once in the Madrid opening-round match, but it came at a crucial time as he served for the first set. After missing out on a set point, he bounced back to break for the set. The Briton again faced a break point as he served out the match, but was able to close it out for the straight-sets victory.

The World No. 124 has won four ATP Challenger Tour events in a strong start to the 2022 season, and defeated Gilles Simon at the Miami Open presented by Itau in March. He next faces sixth seed Andrey Rublev.

Daniel Evans joined his countryman in the second round after a 6-3, 6-4 win over Federico Delbonis as he looks to kickstart his clay swing.

"I think all of it was pretty good," Evans said of his performance against the Argentine, who reached the last 16 as a qualifier last year in Madrid. "I played pretty well throughout the match. I served well, I mixed it up well.

"I've played well this year on clay," he added, "just haven't got my head in front really."

New Conversion and Steal Insights from Tennis Data Innovations reveal how Evans won the match despite Delbonis being the more aggressive player. The left hander won the Balance of Power decisively, hitting from an attacking position 31 per cent of the time to Evans' 20 per cent. 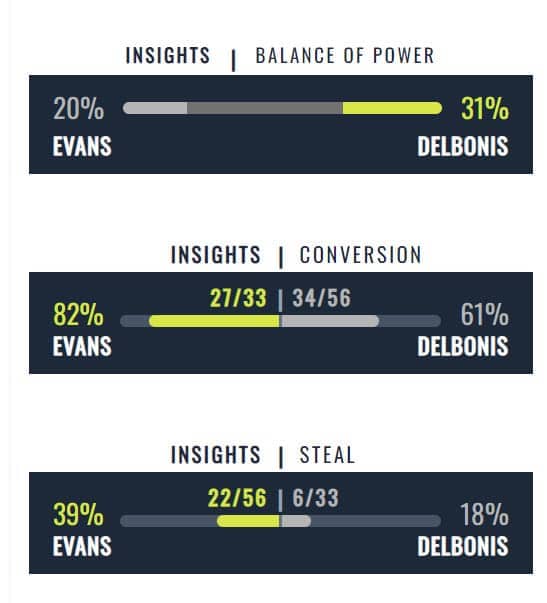 But the Brit was much better at converting from attacking positions, boasting a Conversion score of 82 per cent. In contrast, Delbonis won just 61 per cent of points when he worked his way into offense.

Evans also enjoyed an emphatic edge over Delbonis in the new Steal score metric, winning an impressive 39 per cent of points in which he found himself in a defensive position, handily above the clay average of 35 per cent.

In the only other main-draw singles match on Sunday, John Isner defeated Filip Krajinovic, 7-6(8), 6-4.

In Madrid doubles action, Carlos Alcaraz teamed with Marc Lopez for a 4-6, 7-6(2), 10-4 win in what was the youngster's Madrid doubles debut. Another Spanish pairing — Pablo Carreno Busta and Pedro Martinez — also advanced via a Match Tie-break, beating Rohan Bopanna and Denis Shapovalov, 6-7(6), 6-3, 10-1.