Daniel Evans is chasing a spot in his first Masters 1000 final.

Daniel Evans backed up his win over World No. 1 Novak Djokovic with a hard-fought victory over David Goffin on Friday for a place in the Rolex Monte-Carlo Masters semi-finals.

“I played good today," said Evans. "I felt a bit more pressure today to not [just] win yesterday and give a bad performance today. It wasn’t easy after the match yesterday, I felt really tired afterwards. To get back and focus, it was difficult. I am proud of how I came back today, especially with what happened in the first set. I felt [my] concentration wasn’t great and I am really happy with coming through. Yesterday, would not have been worth it with a bad performance today.

“He was being aggressive towards me. At the start, I was [having to] retrieve. He got on top and I could feel that," Evans said. "He had a little chance at the start of the second set, which I got out of and it just turned it for me, I think.” 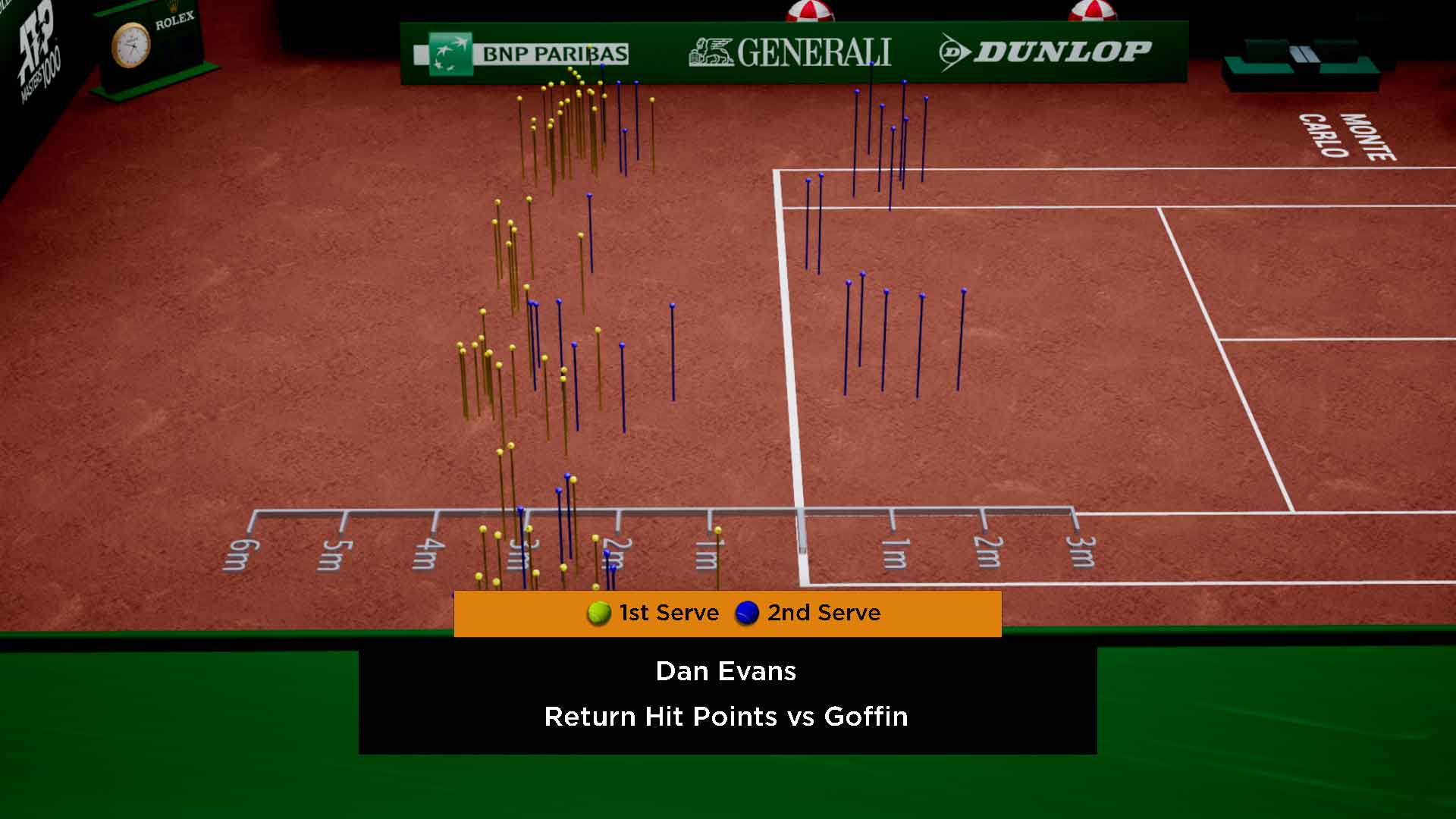 Evans saved four break points in an eight-minute hold at 4-4 in the deciding set. He will now hope to improve upon an 0-2 record against Stefanos Tsitsipas in their ATP Head2Head series in the Briton's first ATP Masters 1000 semi-final.


Evans got off to the best possible start by breaking Goffin’s serve in the first game. The Briton then save three break points for a 2-0 advantage and his shot variation continued to frustrate Goffin, who reached the 2017 Monte-Carlo semi-finals. When Evans served for the set at 5-4, Goffin adjusted his tactics striking regularly to his opponent’s forehand, broke back and assumed control of their second meeting (also 2020 ATP Cup). The 61-minute opener ended with Evans striking a forehand wide.

Goffin held serve to claim his fifth consecutive game of the match, before Evans responded with a run of his own. The Brit rushed the net to take advantage of errors to establish a 3-1 lead and Evans turned the screw at 5-3, when Goffin hit a double fault at 15/40. It ensured a tense decider.

Evans, who had saved three break points from 0/40 at 1-1 in the third set, claimed a crucial hold at 4-4. The 30-year-old then varied his pace to keep Goffin under pressure in the closing stages and the match ended when the Belgian hit a forehand wide. Goffin will be left to rue converting just two of his 17 break point opportunities.

Evans, who is partnering Neal Skupski in the doubles event this week, admitted, "I feel fine. Yesterday, was a bit busy [with] a lot of people messaging and a lot of people speaking, so I didn’t use my phone too much after. It was a little draining yesterday, but I’ll take it."

Evans entered the tournament seeking his first tour-level win on clay since the 2017 Barcelona Open Banc Sabadell. Prior to his straight-sets win against Djokovic, the British No. 1 also defeated 2019 runner-up Dusan Lajovic and Miami champion Hubert Hurkacz.

Goffin was happy with his run in Monte-Carlo, but said: "I could have done everything a bit better. I had the weapons to be able to win today. There was very little difference. He has the power, played more matches than I did, I believe. Also he dared. He was playing a really offensive game on clay. Every time he was down, he served and volleyed and did it very well. I'm happy I had these matches here. Three victories in a Masters 1000 is a good thing for me. It hadn't happened for a while."