Kevin Anderson recovered from two sets down, and saved one match point, to stun eight-time champion Roger Federer 2-6, 6-7(5), 7-5, 6-4, 13-11 at Wimbledon on Wednesday to claim one of the most important victories of his career.

The eighth seed, competing in his first quarter-final at the All England Club, recovered from the brink of defeat after Federer held match point at 5-4 Ad Out in the third set. The defending champion was on the verge of clinching a record-breaking 35th consecutive set at SW19, but Anderson rallied with aggression to reach his second Grand Slam semi-final after four hours and 14 minutes.

"I have already gotten tons of messages from support back home," said Anderson. "Obviously at this sort of event, playing against an opponent like Roger is going to have a lot of coverage. Again, I really hope it's an example of sticking to your dreams and keep believing in yourself. I always say I was in the same position, it's not easy coming from South Africa, it's very far from the tennis scene...

"I felt the first set obviously wasn't great for me. I was a little bit unsettled starting the match out. I thought I settled down much better in the second set. Even though I lost it in a tie-break, I felt I played a much, much better set of tennis.

"Obviously in the third set, I just tried to compete as hard as I could. I was able to hold serve throughout. Obviously [Federer] had that one match point, but I played a good point and was able to get that break. I feel like once I did that, I really settled down well and felt pretty comfortable out there."

The victory lifts the 2017 US Open finalist to within one win of his second Grand Slam final and provides a massive boost to his chances of qualifying for the season-ending Nitto ATP Finals for the first time in his career.

Anderson will face American John Isner for a place in Sunday's championship match. The 32-year-old trails Isner 3-8 in their FedEx ATP Head2Head series.

Anderson fired 65 winners en route to victory in his 100th Grand Slam match, denying Federer a spot in his 13th Wimbledon semi-final. Anderson becomes the sixth man representing South Africa, and the first since Kevin Curren in 1983, to reach the semi-finals at Wimbledon. The New York Open champion also improves to 28-10 for the season.

The No. 8 seed snaps a six-match losing streak against Top 5 opposition to record five consecutive grass-court match wins for the first time. Anderson's last victory over Top 5 opposition came at the 2015 US Open, when he defeated Andy Murray in the Round of 16.

"He's got a nice, big serve that he can rely heavily on... There's nothing really that shocked me because I've seen Kevin play many, many times in the past," said Federer. "Even if the matches have been maybe sometimes one-sided... you always know he can pick it up, and all of a sudden you won't see breaks for some time."

As was the case in his fourth-round triumph over Adrian Mannarino, Federer made a quick start. The defending champion varied his returns, blocking and attacking Anderson's serve with depth, to earn breaks in the first and seventh games. Having lost just one point on serve throughout his opening three service games, Federer then held serve to love, for the third time, to take a one-set lead.

"I felt the first set obviously wasn't great for me," said Anderson. "I was a little bit unsettled starting the match out. I thought I settled down much better in the second set. Even though I lost it in a tie-break, I felt I played a much, much better set of tennis."

Federer's streak of 85 consecutive games won on serve ended abruptly early in the second set, as Anderson stepped in on his return. The South African mixed power and precision, especially on his forehand side, to extract errors from Federer, who was forced to retreat behind the baseline.

But Federer responded well, retrieving the service break in the fifth game before coming from a mini-break down in the tie-break to secure a two-set advantage. Federer's forehand dictated proceedings late in the tie-break, with powerful shots and uncharacteristic errors deciding points, before converting his third set point.

Federer appeared to be heading towards a straight-sets victory as he manufactured a match-point opportunity at 5-4 Ad Out. But Anderson responded emphatically, charging the net and forcing Federer into a backhand error before holding serve.

"I remember the match point pretty well. The ball was there to be hit. I went after it. Had a good first serve, as well," reflected Anderson. "By that stage, I felt I was hitting the ball well. Obviously it was important for me to get through those tight moments. But I feel like my commitment to the kind of tennis I wanted to play throughout the match, it got definitely better as the match progressed."

Anderson capitalised on forehand errors to earn break point in the 11th game, which he converted with a confident backhand return up the line. The New York Open champion then dug himself out of a tricky situation, winning his fifth consecutive point from 0-40 down with an ace up the 'T' to force a fourth set.

"I was very happy that I got off to the right start of the match and was able to take control, somewhat, of the game," said Federer. "I just don't know exactly how I couldn't create more opportunities once the third set came around."

With both men holding serve with relative ease in the fourth set, Anderson made the crucial move in the seventh game. While Federer faltered on his forehand, Anderson fired his into the corner to earn two break point opportunities. A fortunate backhand return for Anderson, which hit the net cord, forced Federer into another forehand error. That moment proved to be the decisive moment of the set as Anderson held serve, after saving break point, in the tenth game to ensure a deciding set. 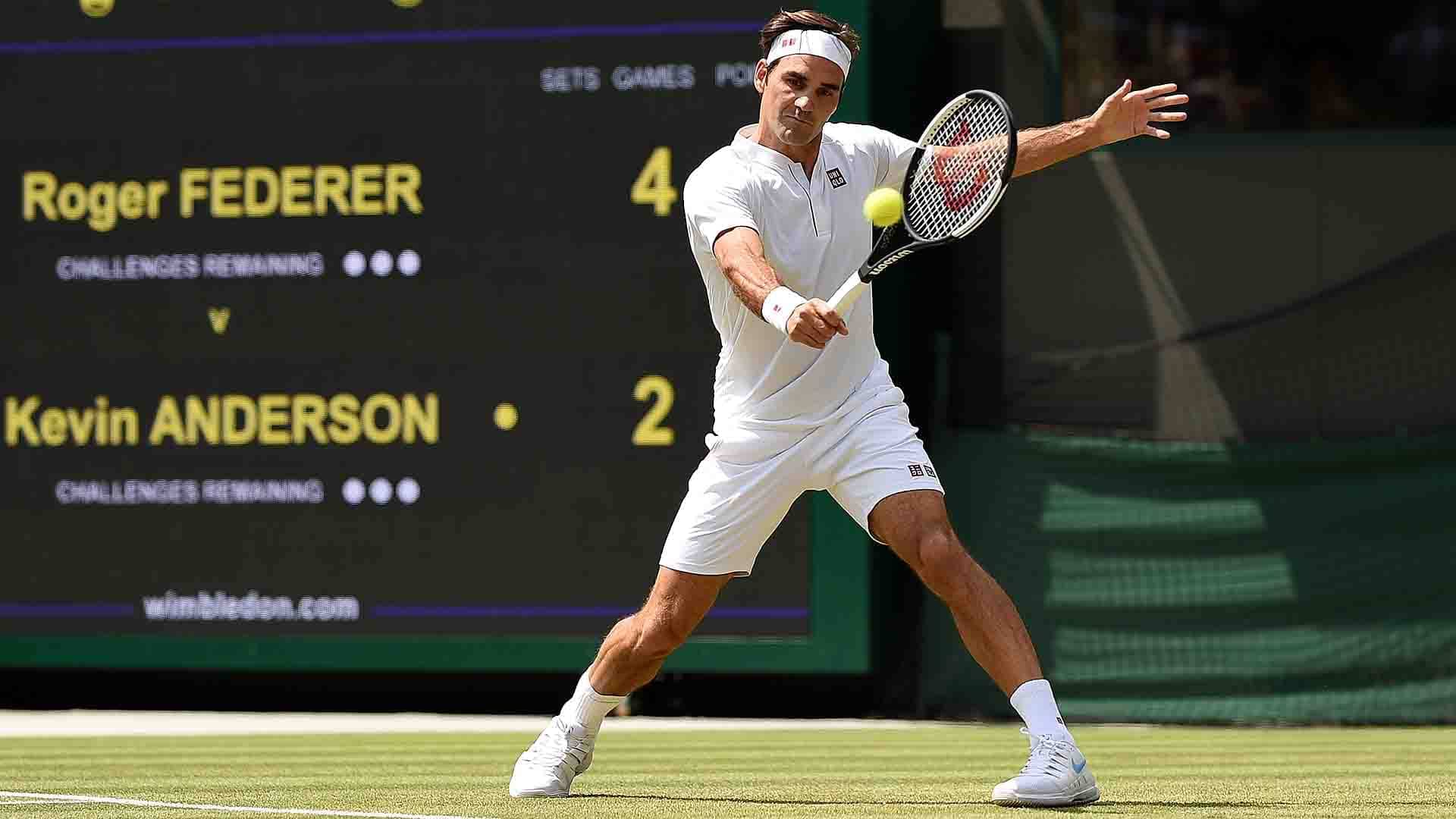 With neither man able to make inroads in their return games, Federer, after failing to convert break point in the eighth game, eventually made a second bid for a break at 6-5. The Swiss moved up the court, lifting his level of aggression to create an opportunity in the 12th game, but Anderson matched Federer, with huge hitting off his forehand and serve to level the score.

Both men continued to hold serve comfortably until 11-11, with Federer making four fatal errors to concede a crucial break. Anderson took full advantage in the following game, holding serve to 15 to complete a stunning comeback.

"I guess there was definitely a moment [where I lost control of the match] at some point," said Federer. "Is it missing match points? Is it getting broken at 5-All after that?

"I'm not sure... There's a lot of little points here and there that always make a difference in the outcome of a match. I don't think this one naturally you can pinpoint exactly, except my match point."

Top seed Federer was bidding to reach the final four for the 16th time at a Grand Slam event since turning 30, but drops to 12-2 on grass and 29-4 overall this season. Federer had won his six most recent matches that went to a fifth set, dating back to his 2016 loss to Milos Raonic in the semi-finals at SW19.

"I think I had my chances, so it's disappointing," said Federer. "No doubt about it. He was consistent. He was solid. He got what he needed when he had to. Credit to him for hanging around really that long."

Looking ahead to his match with Isner, Anderson said, "John has got arguably one of the best serves of all time on the Tour. Especially in the last few months what's really impressive is just his first-serve percentage as well, never mind how accurate and big the serve is. But he's very consistent with the two. Definitely the first challenge is the serve.

"I feel like he relies a lot on confidence... I think he has a lot of confidence right now which allows him to be a bit more free from the baseline. In the matches I've played him, obviously taking care of your serve is the first priority. It's a match that's often won on just a couple of points here and there.

"I feel confident in baseline exchanges quite a lot with John. At the same time, because he's such a big player, has so much firepower, you just can't be too patient. You have to still be aggressive and put him on the back foot."