Watch highlights as Roger Federer, Rafael Nadal and Novak Djokovic all reach the quarter-finals with a pair of wins on a manic Thursday at the Internazionali BNL d'Italia, an ATP Masters 1000 event, in Rome. Watch live tennis streams at http://www.tennistv.com. Photo: Peter Staples/ATP Tour.

Jonathon Braden
This article contains:
Swiss goes 2-0 on Thursday, to face Tsitsipas in the quarter-finals

Roger Federer successfully fled danger once more on clay on Thursday, saving two match points against Borna Coric to advance 2-6, 6-4, 7-6(7) and reach the quarter-finals of the Internazionali BNL d'Italia in Rome.

Coric had two match points at 6/4 in the tie-break, including one on his serve, but the 22-year-old Croatian dumped a forehand approach into the net on his first try, and Federer escaped the next point with a service winner. The Swiss moved on when Coric couldn't handle a backhand volley, and he will now face reigning Next Gen ATP Finals champion Stefanos Tsitsipas in the last eight.

“The first set was really difficult, for me at least. I really struggled to see the ball. There was a lot of shade on the court… and he did well, he’s a very steady player. I couldn’t chase the lines very well so I couldn’t hit any winners, but I really tried to play in a way where I was not going to just lose it. I gave him a chance to win, and he didn’t so I took it at the end,” Federer said.

You May Also Like: Federer Returns With Ease In Rome

“It was very tight. I got very lucky again today already like in Madrid. It’s nice to get lucky I guess sometimes. I’ve lost a lot of heartbreakers throughout the years so it’s nice to win these and the atmosphere was fantastic. People were going crazy. It’s exactly how you want the atmosphere to be,” Federer said.

Follow Along With Live Updates From Busy Thursday In Rome

Coric had won two of their past three FedEx ATP Head2Head meetings, at the Gerry Weber Open in Halle and the Rolex Shanghai Masters. But Federer gained a 3-2 advantage in their FedEx ATP Head2Head series in February by winning their Dubai semi-final in straight sets. Their third-round matchup on Thursday, Federer's second match of the day, was their first meeting on clay.

The Croatian played aggressively against the 28-time ATP Masters 1000 champion, employing the same game plan that led to success against Federer last year. But the Swiss found his way into the match, breaking Coric in the 10th game to take the second set and squeaking by in the tie-break as the home fans celebrated the match – and another chance to see Federer in Rome.

The 37-year-old made his first appearance in the Eternal City since 12 May 2016 earlier Thursday when he beat Joao Sousa of Portugal 6-4, 6-3 to reach the third round. Rain washed out all play that was scheduled for Wednesday, and Federer, along with others, had to win two matches in one day to make the quarter-finals.

Coric, however, was one of four players who reached the third round before the deluge. He beat Brit Cameron Norrie in straight sets on Tuesday evening. But Federer had recent experience in double duty, having won two matches in one day last August at the Western & Southern Open in Cincinnati, and he did it again in Rome. 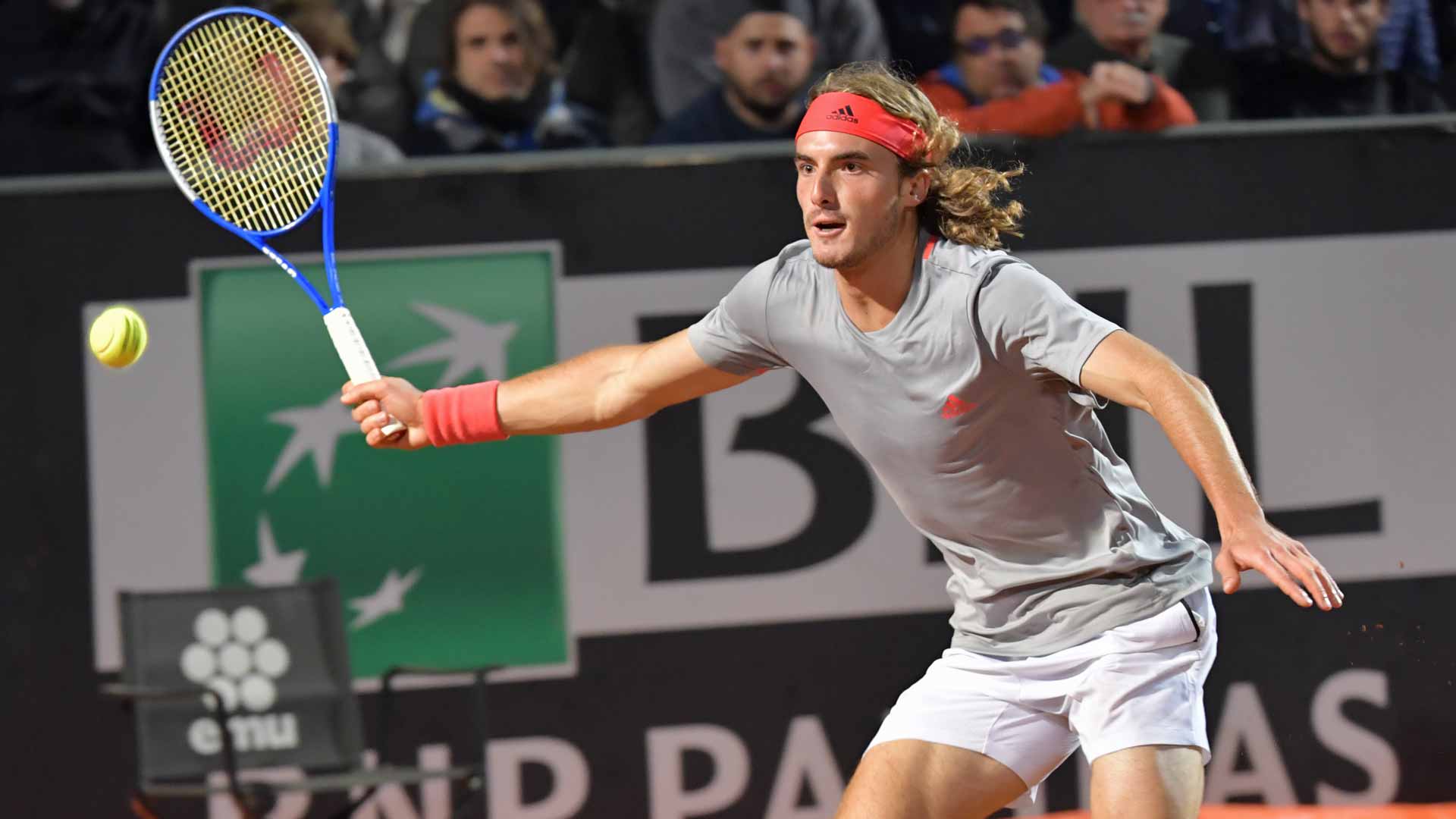 "I'm glad I passed this test. It was a difficult test. Fabio, champion of Monte-Carlo, he really knows how to play on this surface. He's not just anybody. I knew it was going to be a tough battle against him," Tsitsipas said. "He's pretty much consistent from the baseline. He likes to come to net sometimes. It was kind of tricky. I stayed concentrated. I was very pumped to do well. I think that helped. Yeah, really glad with my performance. Stayed aggressive. I played well today. I think that helped a lot."

The #NextGenATP Greek had never reached a clay-court Masters 1000 quarter-final prior to making the final last week in Madrid. But the 20-year-old has now accomplished the feat two weeks in a row. Last year, Tsitsipas had to qualify at the Foro Italico.

Tsitsipas did well to neutralise the Italian as Fognini attempted to control the baseline. The three-time ATP Tour champion broke Fognini four times and won 81 per cent of his first-serve points.

Tsitsipas and Federer have contested both of their FedEx ATP Head2Head meetings this year, with the Greek triumphing in four sets in the fourth round of the Australian Open and the Swiss star bouncing back to beat Tsitsipas in the Dubai final.

"He's considered the legend of our sport. He's very much respected. I'm pretty sure it's going to be twice more difficult than today. He likes to serve-and-volley. He has a lot of variety in his game. I really don't know what to expect from him," Tsitsipas said. "I expect he's going to obviously try to take the ball early. I think with my fighting spirit and mentality, if I'm in the zone tomorrow, comfortable, I think I can do something."