Roger Federer fans arrive at The O2 in London ahead of his final match on Friday.

Fans Excited For Federer Send Off

Roger Federer will bring the curtain down on his historic career when he competes for the final time at the Laver Cup on Friday evening in London.

The Swiss star will team with longtime rival Rafael Nadal in a doubles match for Team Europe against Team World pair Jack Sock and Frances Tiafoe.

With the world set to watch on TV, 17,000 lucky fans will experience the momentous occasion live inside The O2. Ahead of the clash, ATPTour.con spoke to supporters who have travelled from all corners of the globe to witness the action inside the arena.

You May Also Like: Federer To Team With Nadal For Final Match In Laver Cup Doubles
Gabriel Blum and son Enrique have flown from Brazil to attend the event. Donned in Federer and Nadal gear, both beamed as they spoke about their excitement of watching the Swiss maestro for the final time.

“We have come all the way from Brazil to watch him. I am a big Roger fan and my son is a big Nadal fan,” Gabriel said [below left]. “I remember watching him play against [Pete] Sampras and beating Pete at Wimbledon in 2001 and I thought, this is someone special. I then followed him closely from 2006. From 2016 I kept telling my wife, we need to go to his matches as he won’t play much longer and now here we are in 2022 and he is finishing. I am very excited to watch him one last time.”

“I am super excited to watch Nadal and Federer,” son Enrique enthusiastically added [below right]. 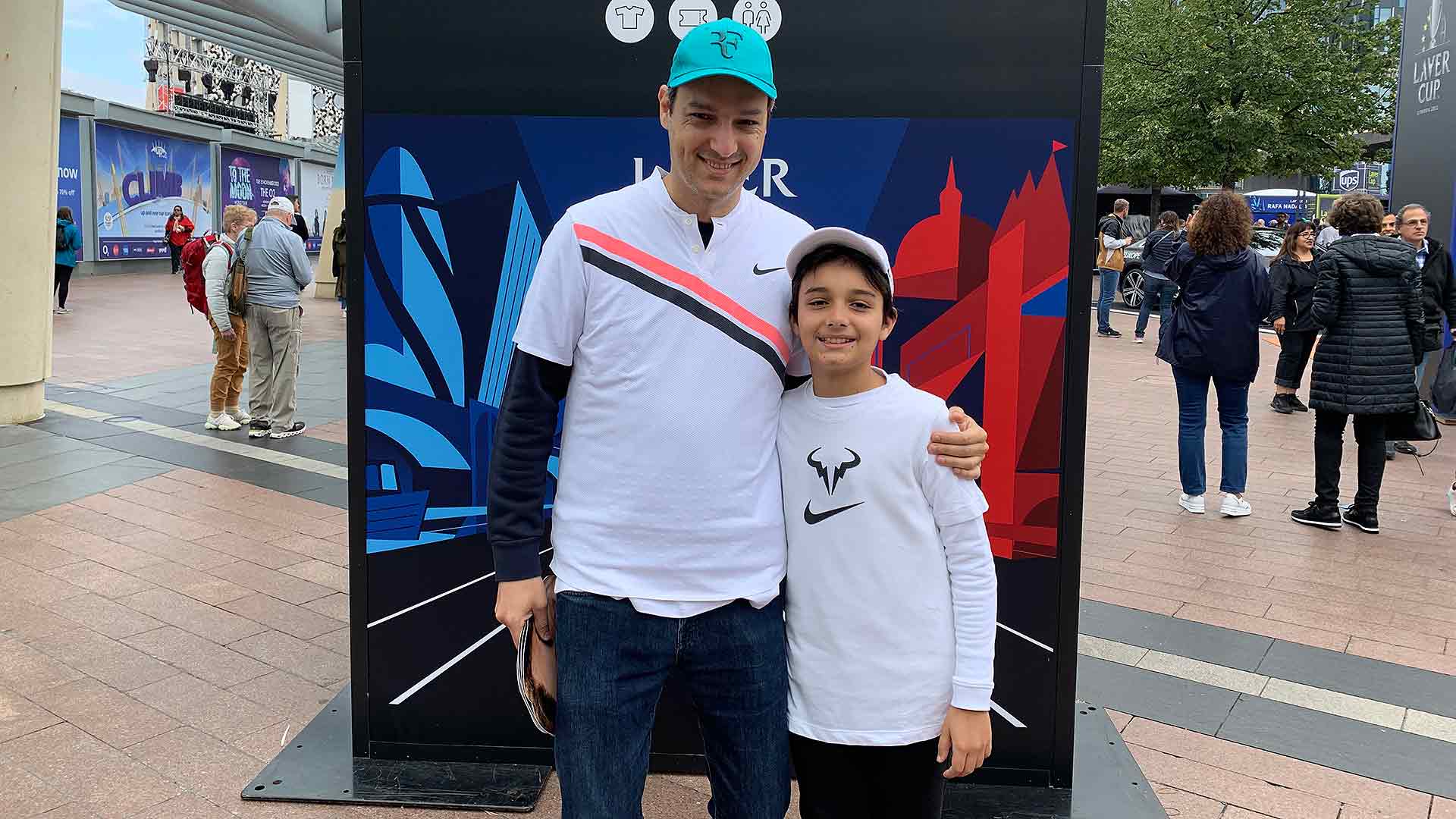 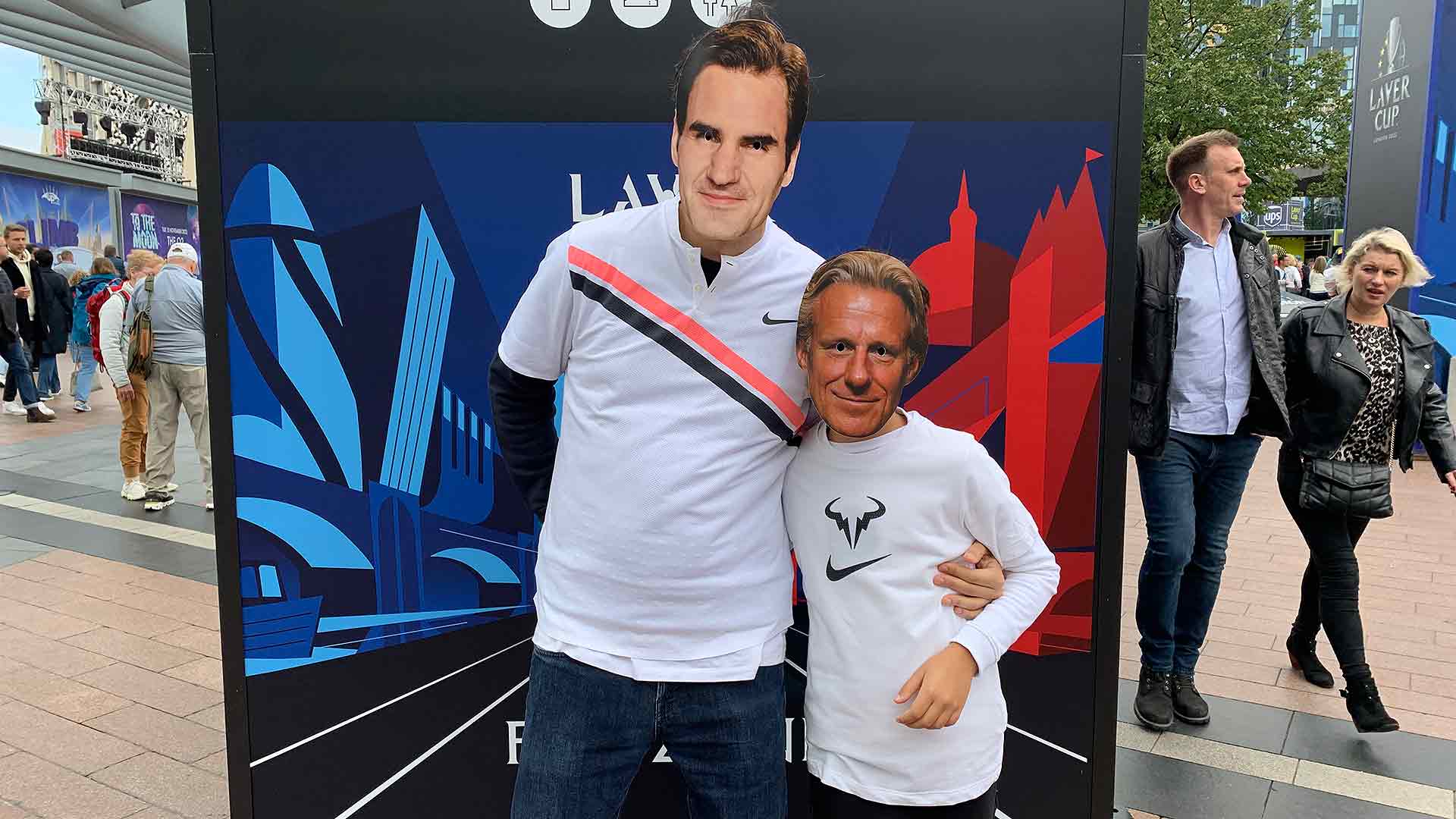 Gabriel and Enrique put on their Federer and Bjorn Borg face masks.
After a stressful 24 hours online, superfan Arslan Bhattie finally secured tickets for himself, his wife Ifrah and his children

“I got tickets in April for session five only because I thought I could see Team Europe win the trophy," Arslan said [below centre left]. "Then Federer announced his retirement and I went mad. I got tickets for sessions three and four, but I didn’t know he would say his last match would be Friday. Since Thursday I have pressed refresh 5000 times and I finally got the ticket. I am super excited. Ending with Nadal is the best way to say goodbye because Nadal has been such a phenomenal player. You can’t write the script better.” 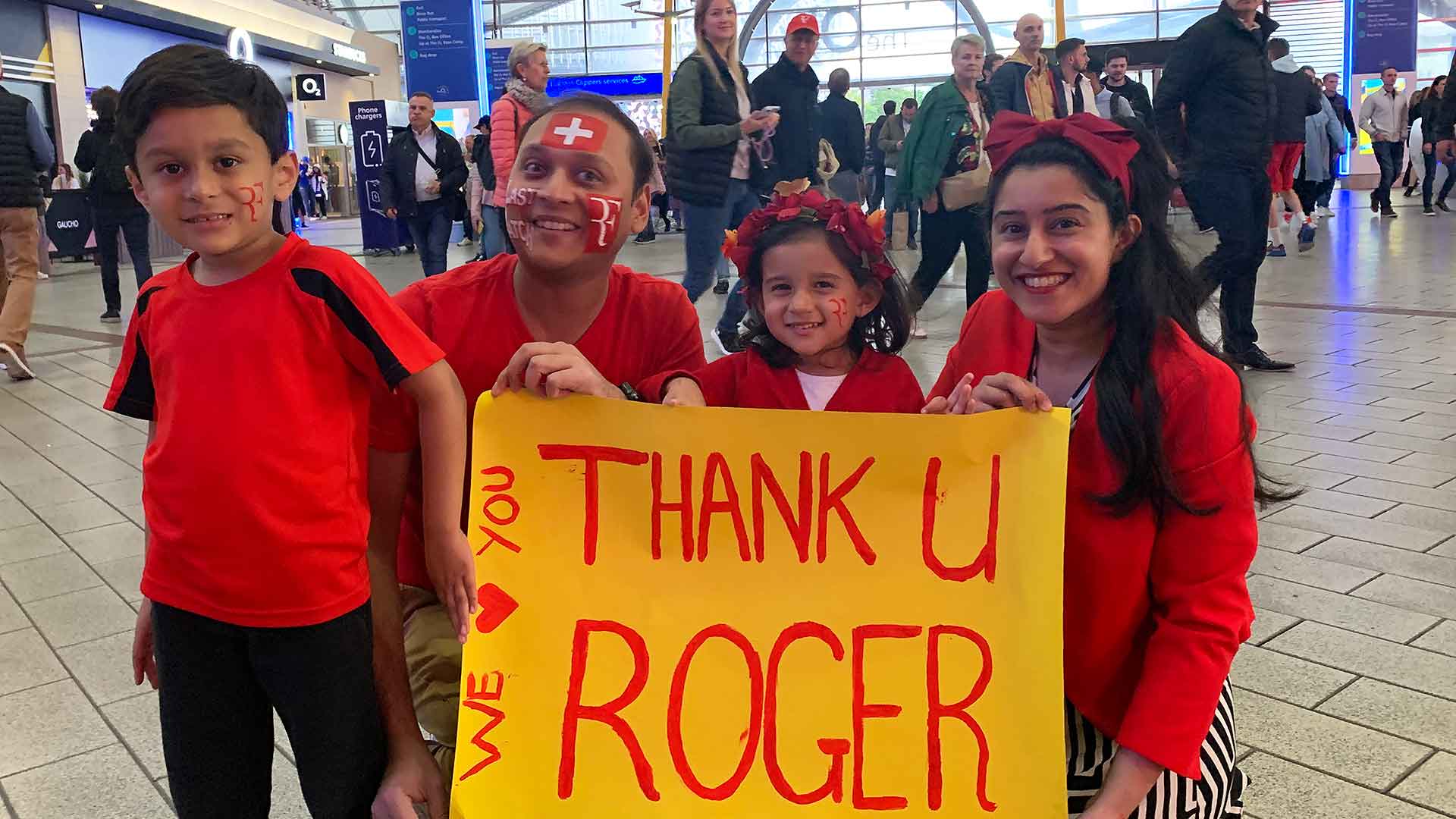 Joanna Haener and Rolf Haener live in Munchenstein, the town where Roger Federer spent his childhood. They are excited to watch their home star in action one final time.

“We come from the suburb where Roger grew up. It is called Munchenstein. Today I am sad but grateful to see him,” Joanna said [below left]. “We have followed him lots. We were here in London for the [Nitto] ATP Finals, at Davis Cup.”

“We went to Laver Cup in Prague and Swiss indoors in Basel,” Rolf added [below right]. “The Nadal match in the Finals in 2011 stands out.” 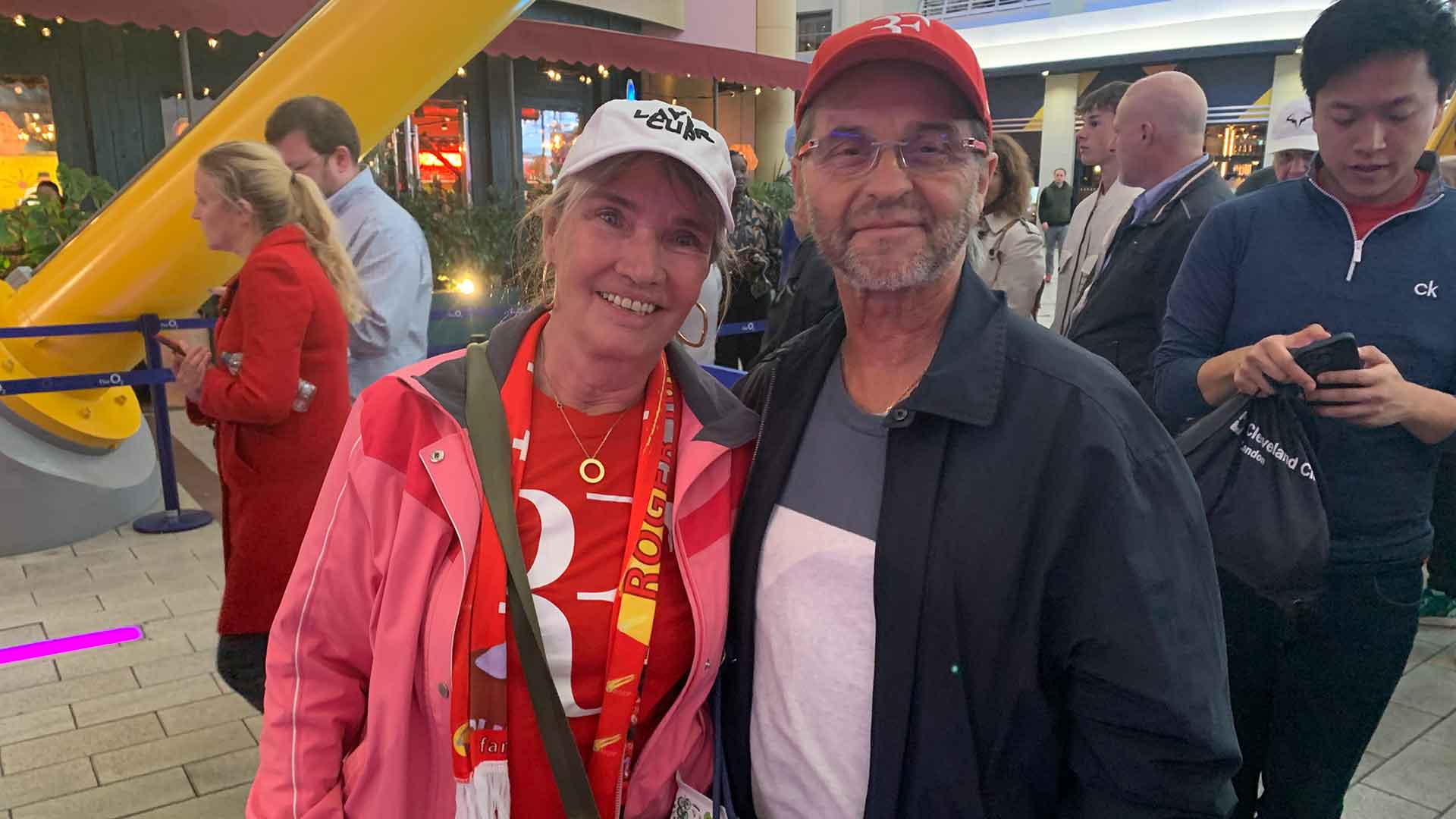 For many fans inside the O2, the historic clash will provide an opportunity to say one final thank you to Federer. Marsha Procopio and Athos Rassias have travelled from the United States for the occasion and are excited to watch him finish his career.

“We came to London just for this. We have had these tickets since March, before Roger announced his retirement,” Marsha said [below left]. “We have been Roger fans since the early 2000s, since the beginning. We are so excited to be here. We feel very privileged to be here from this amazing event.”

“There are so many standout matches, the ones he played against Nadal,” Athos said [below right]. “One that sticks out in my mind was in the quarter-finals at Roland Garros [2009] against Tommy Haas. He was two sets down and he managed to come back and beat Tommy.” 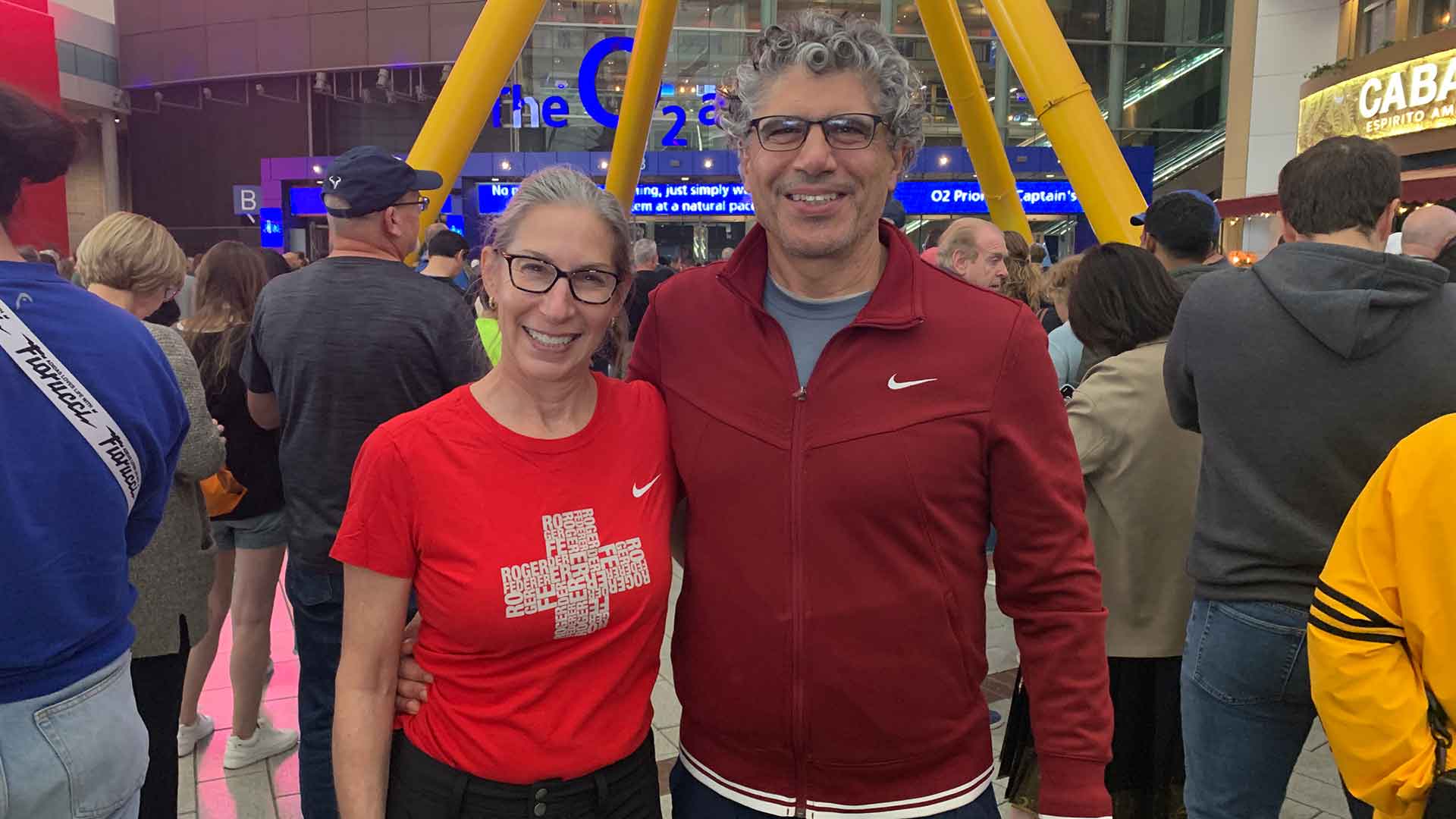 For Michael Ferguson and his friends, the occasion will be special.

“We flew over especially for today,” Michael said [below far right]. “We got our tickets in February as we thought the retirement may be coming. I am so excited and super sad at the same time. He has given us so much pleasure over the years. He is a genius. We are all lucky that we have been able to watch him quite a bit at Wimbledon or Laver Cup.” 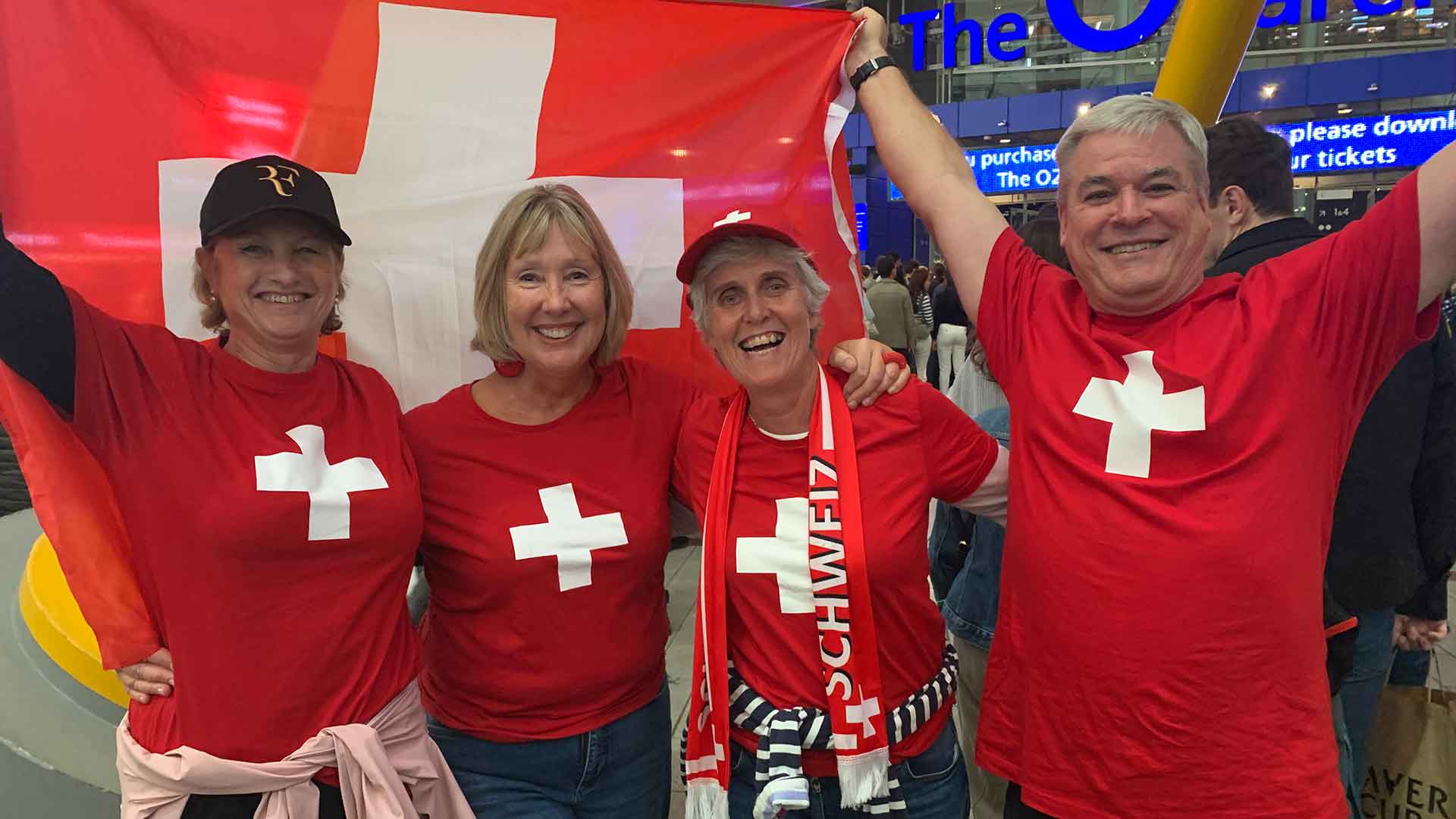 Doris Loeffel has frequently attended Federer's matches during his career. She is grateful to have the chance to watch him play for the last time.

“I watched him train [on Thursday] and it was great,” said Doris Loeffel [below], who has travelled from Switzerland to watch the match. “Federer feels good now and that is the main thing. I am just pleased I can be there. I always wanted to be at his last match and here I am in London. Even though it is sad, it is also a pleasure. The very first time I saw him play was in 2001 at Roland Garros. I followed him ever since he won boy’s Wimbledon in 1998.” 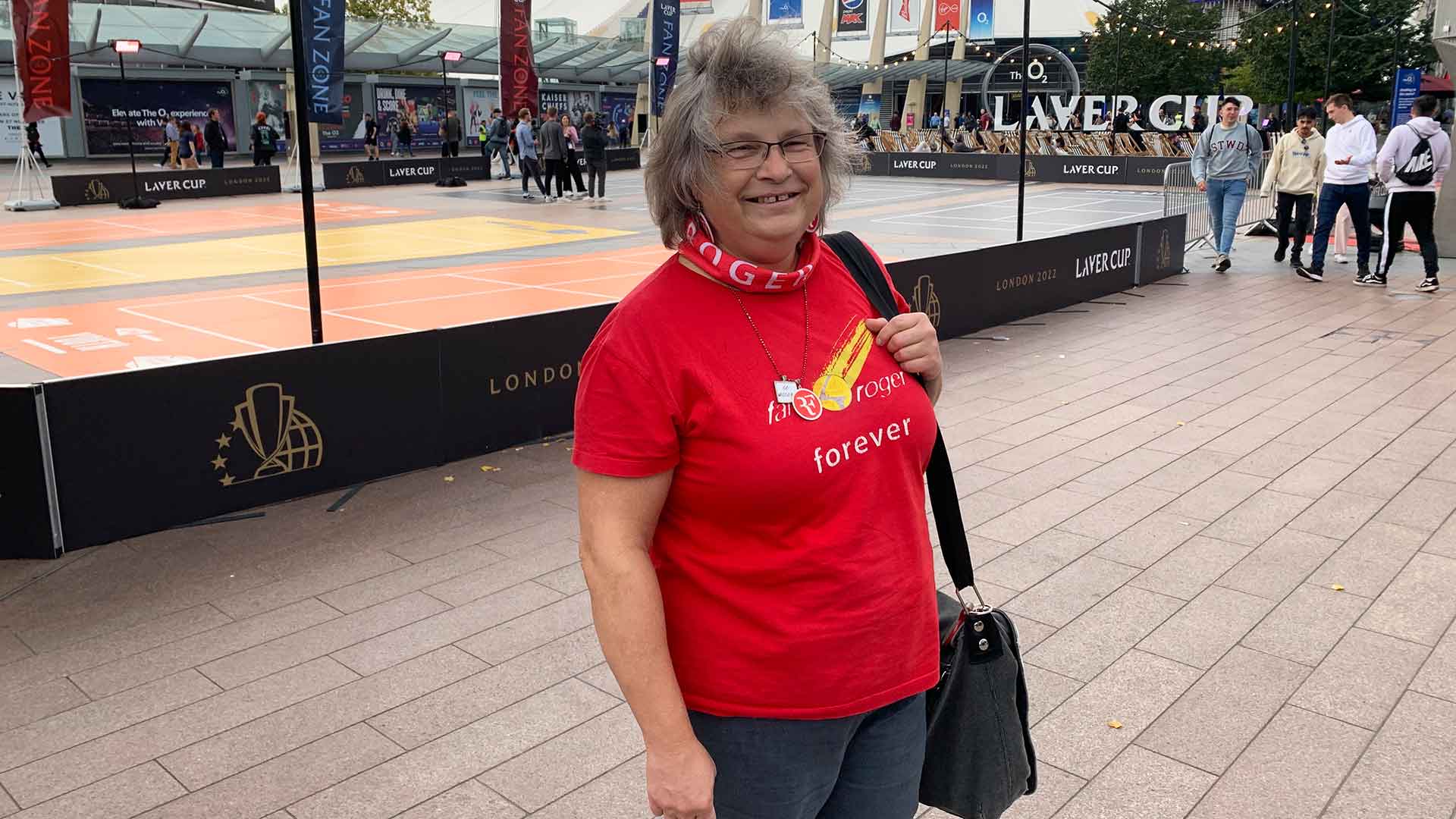