Roger's Return: School’s Back In Session For This Federer Superfan

Dave Seminara
This article contains:
It’s been a barren 12 months for this Belgian fan, but good news is on the horizon with Roger Federer’s return to action next week in Doha

While Roger Federer fans around the world eagerly await their hero’s return in Doha, a 63-year-old retired schoolteacher in Belgium offers a lesson in how patience has its rewards.

Martine Lessire has seen Federer play live 44 times and would be present in Doha this week for his long-awaited return if she wasn’t locked down in Belgium due to the pandemic. But she’s not content to simply watch his matches. She also waits for him, alongside other fans, outside stadiums, practice courts and hotels just to have an opportunity to wish him luck, take a photo, or exchange a few friendly words.

“I don’t know if Roger knows my name by now, but he knows my face for sure,” says Lessire.

After paying €900 for a ticket to Wimbledon in 2016, she camped out to see Roger in 2017, 2018, and 2019, when she slept for an entire week in her tent outside the All England Club. Because there’s nowhere to shower in the queue, she also paid for a room in a nearby bed & breakfast. “You have to run there and back to clean up because you are only allowed to leave the queue for one hour,” she says.

Lessire has no complaints. Camping out for a week was great fun, she says. And so was waiting eight hours in Rome in 2016 in order to give Federer the red envelope — a package full of good luck wishes from his fans around the world. “I wanted to have a good spot so Roger would see me,” she explains. “I don’t mind. We spent more time waiting to see him than watching him play. You must be patient.”

Her most memorable exchange with Federer took place in Rotterdam in 2018 after he returned to No. 1 in the FedEx ATP Rankings. It was freezing cold, and the pack of fans waiting for Roger outside the stadium began to thin out after an hour or so. But Martine wouldn’t budge. “When Roger finally came out, it was just my friend and I so we got to talk to him,” Lessire recalls. “We waited three hours but it was fantastic!”

Lessire treasures her brief interactions with Federer. “Roger is always so kind to us,” she says. The father of four appreciates his fans and is fortunate to have ones as passionate at Lessire, but she insists that it is her and other Federer devotees who are the lucky ones.

“Watching Roger is like a gift for me,” she says. “With no Roger matches to watch this year, it has been terrible.” 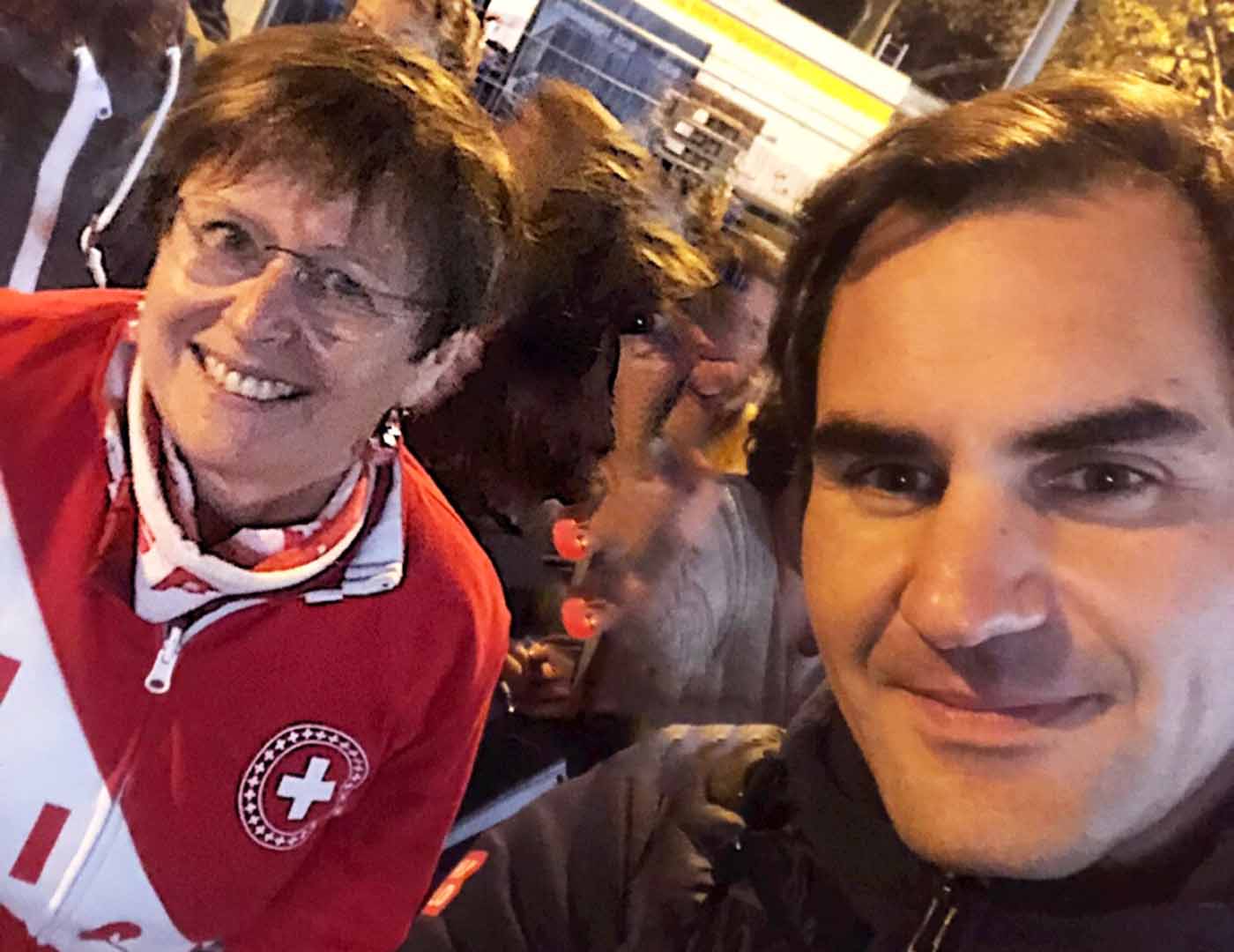 Lessire played some tennis as a child but says she wasn’t very good. Before Federer came along she was a fan of her countrywoman Justine Henin and didn’t follow men’s tennis closely. She began to root for Federer in 2008, but her obsession kicked into overdrive after seeing him live for the first time in 2012 at a Davis Cup match. “In person, you can see the power of how he plays, his grace, his movement; everything is different when you see tennis live,” she says.

Since that day, she has watched every Federer match either live or on Tennis TV, which hasn’t always been easy, particularly when she was still teaching. Her husband, Giancarlo, isn’t much of a tennis fan but that’s okay, she says, because when she streams Roger’s matches — always live, even if they occur in the middle of the night — she prefers to be alone. “I’m too nervous,” she explains. “I don’t want to speak to anyone, but I text with other Federer fans.”

Her fealty is absolute — she says she would support Switzerland over her native Belgium in Davis Cup play if Roger was playing. When she was still teaching, her students knew better than to speak ill of Roger, and one of the parents buttered her up by baking her an RF birthday cake with a tennis racquet in the frosting.

Giancarlo doesn’t mind her Federer fetish — he doesn’t even object to the life-size cutout of Federer in a tuxedo, now with an RF mask on his face in their living room — because her hobby makes her happy and because it has helped her make friends with likeminded Fed fans around the globe.

You May Also Like: Why This Superfan Gives Federer ‘The Jaanu Treatment’

2020 was a rough year, thanks to the pandemic obviously, but also the fact that Djokovic crept closer to Federer’s 20 majors and Nadal tied it. If one of them has to break his record, Martine would prefer that it be Rafa, since he and Roger are good friends.

Martine hopes she’ll be able to see Roger at the NOVENTI OPEN in Halle, her favourite tournament, this summer. She prefers this tournament because of the set-up — the players’ hotel is across from the stadium and the practice courts are right next door, affording her a multitude of Federer stakeout opportunities. “On a good day, I can see him several times there,” she says.

Federer’s comeback will afford her more opportunities to cheer for him, or cry as she said she did for a full week after he lost to Djokovic in the 2019 Wimbledon final, if things go wrong. Martine says the tears will flow for months the day Roger announces his retirement. But for now, her patience is about to pay off yet again as her hero takes the court in Doha. “It’s always worth it to wait for Roger,” she says. “He never disappoints his fans.”