Why This Superfan Gives Federer ‘The Jaanu Treatment’

Dave Seminara
This article contains:
The unforgiving streets of Kolkata are a long way from the hallowed lawns of Wimbledon, but passion for Roger Federer cannot be contained by borders

As Roger Federer prepares to return to the ATP Tour in Doha next week after 13 months on the sidelines, we'll bring you the stories of two superfans today and tomorrow who personify how much the tennis world has missed the Swiss legend. Today we begin with India's Sunita Sigtia.

When customers who walk into Sunita Sigtia’s shop in Kolkata, India hear yelling and screaming coming from the back room, they know there must be a Roger Federer match going on. Ms. Sigtia runs a textile business, The Masspoint, supplying fabrics to designers, and her regular clients know not to disturb her when she’s busy worshipping and exhorting Federer from afar in her office during his matches.

For Sunita, Federer matches are sacred and her relationship with Roger is a passionate one. She sometimes calls out “come on my jaanu”! which is akin to “come on my dear [or my darling]” in Hindi. [Ms. Sigtia also has pet nicknames for Federer’s rivals, but let’s just say that they don’t get the jaanu treatment.]

Her face lights up at the mention of Roger, whom she says is her hero and role model. Ask her how many times she’s told Roger Federer she loves him in person and she laughs hysterically. “So many times,” she says, beaming. Query Sunita on how much money she has spent watching Roger play more than 100 matches around the world and she laughs even more.

“I cannot calculate it all,” she says. “But it’s always worth it.” Her sisters once questioned how much money she spent following Federer to Dubai, London, Basel and other tournaments. “Roger is my passion, he’s my idol,” she told them. “I’m going to spend all my money on him.”

Ms. Sigtia, single and in her 40s, was a badminton champion in university but didn’t take up tennis until four years ago. Of course, she learned how to hit a one-handed backhand in honour of Federer. Sunita has followed tennis for years — before she became obsessed with Roger around 2003, she was a fan of Pete Sampras, Stefan Edberg and Boris Becker. But her devotion to those stars can’t compare to her love for the 28-time ATP Masters 1000 champion.

She didn’t spend her hard-earned money traveling to their matches, nor did she wake up in the middle of the night to watch them play as she does for Federer. And she never consulted a guru to find out what was wrong with their games during slumps, as she did for Roger years ago when he was struggling. [The guru suggested Roger wear emerald, so she presented him with a lucky emerald ganesha at a tournament in 2012.]

“There is something so special and charming about him,” she says. “His game is there of course, the grace with which he plays. When you meet him, there is something that pulls you to him. You just get attracted to him, the way he treats us, he makes you feel like you are a part of his extended family.” 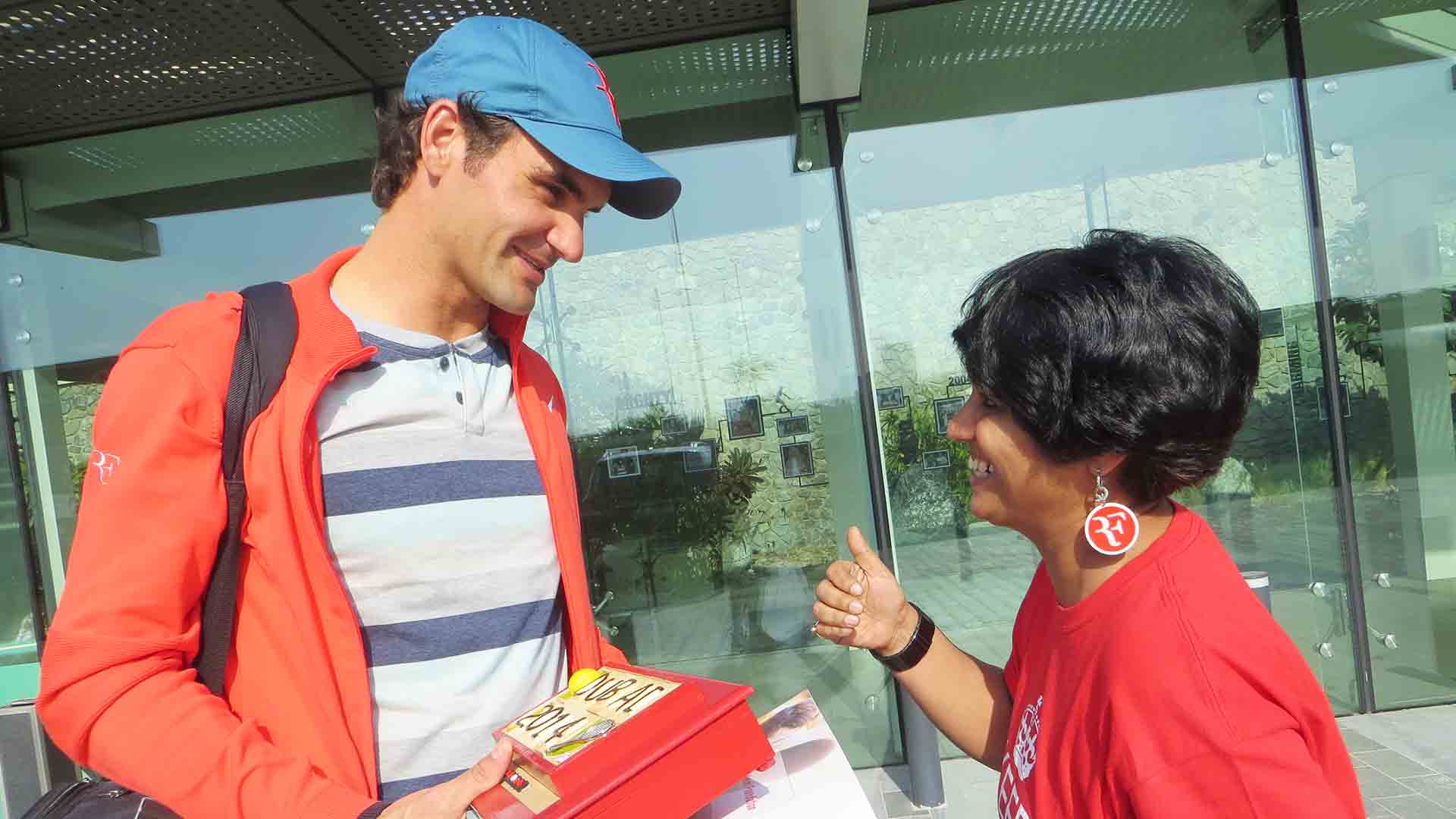 After camping out to see Federer for the first time at Wimbledon in 2008, she’s gone back nearly every year since. “I literally couldn’t stop shaking the first time I saw him on Centre Court,” she recalls.

Ms. Sigtia has two Federer tattoos — one depicting the RF logo on her back, the other a rendition of Roger’s signature on her right arm. She picked up the latter after Federer won the Australian Open in 2017, which is one of her favourite Federer titles. In fact, she treasures that unexpected win so much that she’s been watching the final five games of the match nearly every night during the pandemic.

Federer inspired Ms. Sigtia to start her own charity — SIIRF [Some Immensely Inspired Roger Federer Fans] — which provides assistance to impoverished ball kids at her tennis club. Through this charity, she met Indian doubles players Vishnu Vardhan and Sriram Balaji, who got her an all-access badge for a day at Wimbledon in 2018. By this point, she had already encountered Federer outside practice courts and arenas around the world, but always with scrums of other fans around. On this occasion, she got to see her jaanu and take a photo with him in an area restricted to fans.

“Roger was shocked to see me in a players’ area,” she recalls, laughing.

You May Also Like: Roger's Return: School’s Back In Session For This Federer Superfan

But her favourite Federer moment occurred in Basel in 2012 at the Roger Federer Fan Club day, when Roger stunned her by remembering her name after she presented him with a Swiss cowbell she made with messages of support dangling from it.

“I almost collapsed when he called me by my name,” she recalls. “I don’t remember what I said to him. I was speechless. He remembered my name!”

Ms Sigtia says that it has been difficult to have no Federer matches to watch during such a challenging time for her country and the world. But she cares about Roger so deeply that she felt relieved when he announced that he wouldn’t be playing again in 2020. “I didn’t want him travelling at a time like this because I don’t want him to catch coronavirus,” she says. “It was a relief to know that I didn’t have to worry [about Roger getting sick] for the rest of the year.”

Sunita has had plenty of time during India’s lockdowns to put in perspective what Federer has meant to her. “I will live with all the moments and memories I’ve shared with him,” she says. “That’s what I realised in the lockdown. I’m so glad I’ve had a chance to follow my dream and my passion.”

She’s certain that Federer is going to come back to the Tour with a roar and is confident that he’ll eventually break Jimmy Connors’ record of 109 tour-level titles. Ms. Sigtia says she’s learned to cope with Federer’s losses, but she still cries. And she lives with the cold reality that someday her Swiss superhero will retire. But she says she’s made peace with it all because Federer has already given her and other fans so much joy.

“He has given us everything he has,” she says of her jaanu. “It’s not just about numbers, there is so much more to Roger than the number 20 [majors]. I don’t want to cry when he retires, I want to celebrate him.”