Federico Coria moves into the third round at Roland Garros, earning his first match wins at the Grand Slam level.

Editor's Note: In his first Grand Slam as a Top 100 player, Federico Coria has advanced to the Roland Garros third round after defeating Benoit Paire. He will face either Jannik Sinner or Benjamin Bonzi on Friday. This story was first published 24 September.

In the early to mid-2000s, Guillermo Coria was a force on the ATP Tour. One of the best defenders in the game and a strong baseliner, the Argentine used his superior agility to soar as high as No. 3 in the FedEx ATP Rankings. Also a finalist at Roland Garros in 2004 and a two-time ATP Masters 1000 champion, Coria was a fixture inside the Top 100 for many years. 'El Mago' was the clay-court king during his tenure on the professional scene, dominating on the surface throughout his career.

Now, more than a decade later, the Coria legacy continues. On Monday, Guillermo's brother Federico Coria cracked the Top 100 for the first time, entering the fray after an impressive week at the Internazionali BNL d'Italia in Rome. The 28-year-old rose to a career-high No. 98 after earning his first win over a Top 50 opponent (Struff) in his ATP Masters 1000 debut.

"It makes me really happy," said Coria. "Monday was an incredible day in my life. I looked at my phone and just stared at the number. I couldn't believe it. It's a dream realised and one that I've been fighting for, for a long time.

"I was actually anxious for this to happen. It was supposed to come earlier in the year, but the pandemic arrived and I had to wait. But this was very special, after winning my first Masters 1000 match in Rome and beating the No. 30 in the world. It ended up being better than I imagined."

The Corias are one of just four sets of brothers to feature inside the Top 100 of the FedEx ATP Rankings since 2000. They join Jurgen Melzer and Gerald Melzer, as well as Olivier Rochus and Christophe Rochus, and most recently Alexander Zverev and Mischa Zverev. 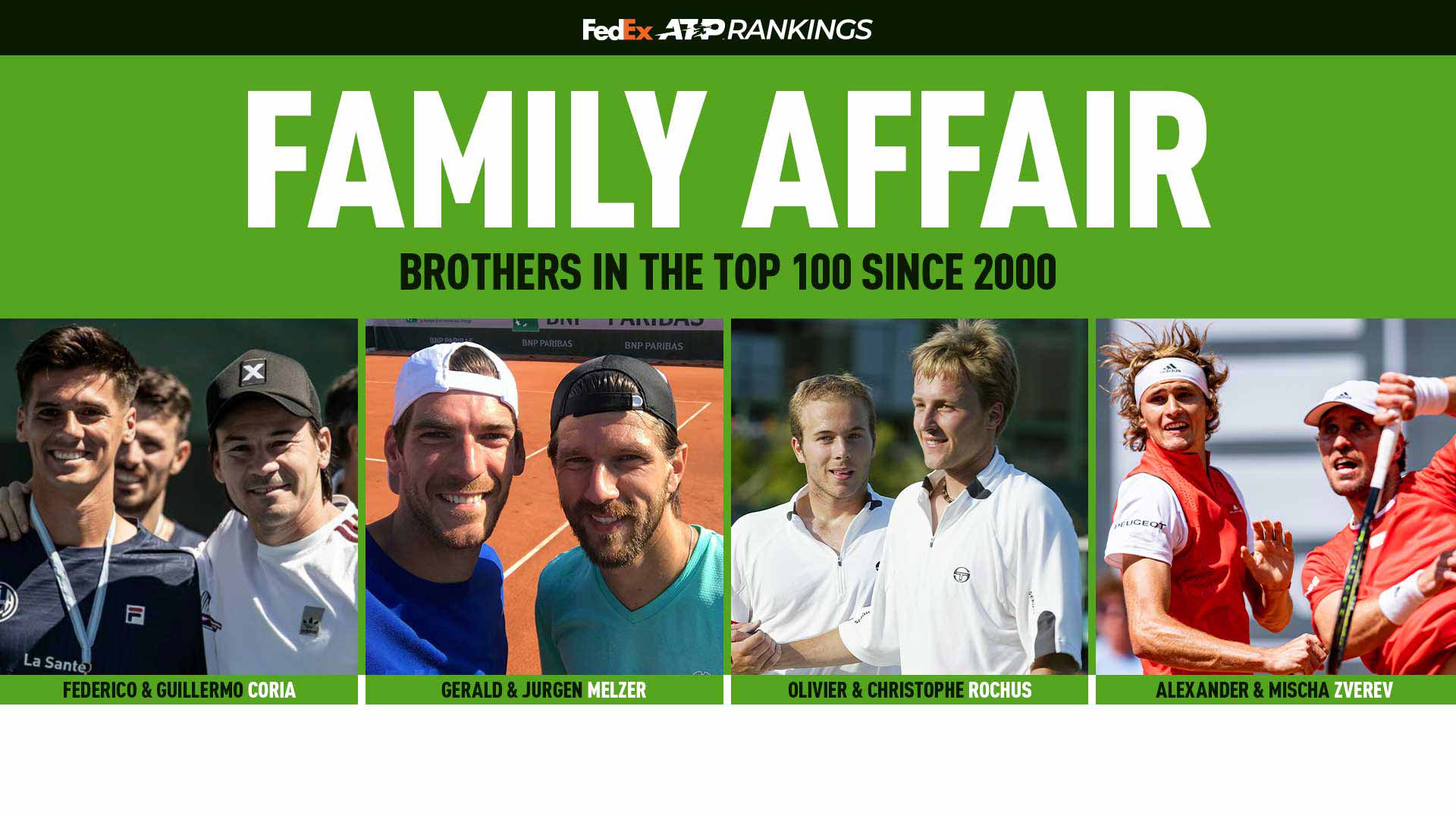 For both Federico and Guillermo, it is a special accomplishment. The brothers have a close relationship and Guillermo relishes his sibling's achievements like they are his own.

"My first dream was to get an ATP point," Federico added. "I remember when it happened, Guillermo printed the rankings page and posted it at home. Today, after 10 years of traveling all over the world, with many highs and lows, to be Top 100 gives me a great desire to continue climbing."

"I am very proud and happy for Fede, that he has entered the Top 100," said Guillermo. "He is fulfilling his dreams and that gives me great happiness as a brother. At one point he thought it was too far away and almost impossible. But he never gave up, he fought and kept on going to play tournaments and gain confidence. He was lonely a lot, but this is the reward for all those results and that sacrifice." 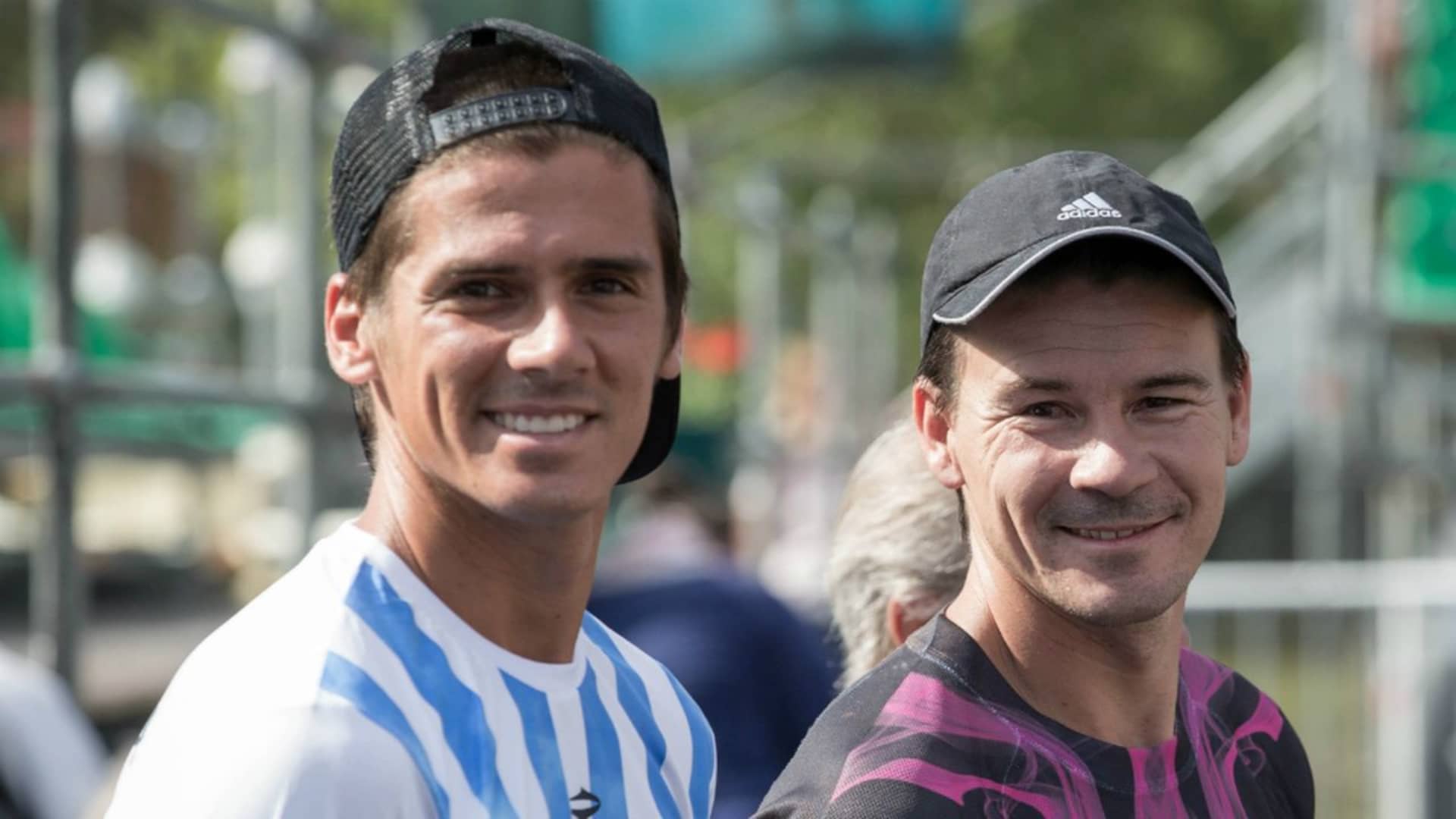 You May Also Like: Coria Pays Tribute To Big Bro With Savannah Crown

When Coria says he has been fighting for this moment for a long time, that is not hyperbole. The Argentine has battled on the ATP Challenger Tour since 2016 and was competing in ITF events for nearly five years before that. Now, the grind is paying off. Last year, he lifted his maiden Challenger trophy in Savannah and reached three more finals as the year rolled along.

And in 2020, he made his mark at the tour-level, surging to his first ATP Tour quarter-final in Rio de Janeiro and claiming his first Grand Slam match win at the US Open last month. His breakthrough in Rome was the icing on the cake.

For Federico, the road to this moment started more than 20 years ago, when he instantly became inspired by his brother. Guillermo was his idol. Ever since he was a child, he would watch him compete on TV. The Corias are from a very small town in Argentina, named Rosario, and Guillermo was always on the road either competing on the ATP Tour or training in Buenos Aires and Miami.

Federico explains that he was very shy when he was younger. He became so nervous when his brother would call home that he would run and hide.

"It was very difficult for me. I couldn't speak to him when he called. I looked up to him so much. And now, it hasn't been easy to follow in his footsteps. Whenever I would travel to a tournament, he had already won it when he was two years younger than me. I couldn't manage it. I struggled a lot with that, because I wanted to be a normal kid. I wanted to be a boy that did not attract attention. I didn't want to arrive at a tournament and everyone expects me to achieve the same as my brother. I've never been as talented as him and this was a big mental challenge for me."

When Federico won his lone ATP Challenger Tour title in Savannah, he paid tribute to his older brother. In what was the biggest moment of his career, he dropped to one knee and pointed to sky. It was just like Guillermo used to do in his Challenger days.

"On the other hand, coming from Argentina, there is pressure - sometimes even greater than what I experienced - on all the other players. It's not unique to me. So if I could go back, I wouldn't change anything. For me, looking back, it was incredible to have a brother that was No. 3 in the world and could help guide me through my career. His support means everything to me."

When asked what has been the best advice he's ever received, Coria recalled a special moment with Rafael Nadal at the ATP 250 event in Buenos Aires. The pair were sitting in the locker room one afternoon and Nadal turned to a young Federico to discuss the next steps in his career.

"There were no cameras, just the two of us in the changing room. He asked me where I was playing next and started talking about my position [in the FedEx ATP Rankings]. He explained that many years ago he was in the same position as I was, and that I need to work every day and leave it all on the court. Your ranking is a consequence of how hard you work and the results you have. You earn everything you receive. He didn't have to do that. He didn't have to take an interest in me and give me advice, but he did and I'm very grateful."

Coria will make his Roland Garros debut next week, opening against a qualifier. He could face 23rd-seed Benoit Paire or Soonwoo Kwon in the second round.