Former World No. 3 David Ferrer steps into retirement following a prolific 20 years on the ATP Tour.

Javier Mendez
This article contains:
Former World No. 3 won 27 titles in 20 years on the ATP Tour

Arguably one of the Spaniard's most famous quotes came when he was at the peak of his career at No. 3 in the ATP Rankings. And, in eight words, it sums up the spirit of David Ferrer's professional career from his first day in 2000 until his final match at the 2019 Mutua Madrid Open. From such heights, Ferrer maintained the same humility as when he started hitting his first shots on the frontón court at the Club de Tenis Jávea until finishing it all at the Caja Mágica.

As a child, on Saturdays and Sundays he would spend practically all day at the club in his hometown. After training, Ferrer would spend time there with friends and in the afternoon he would play frontón, imitating his idols such as Andre Agassi, Sergi Bruguera and Carlos Costa. On those afternoons of frontón he imagined he was those ATP Tour players, but did he ever imagine that years later he would be sharing the locker room with them?

“I thought of it later, when I was with them,” says the Spaniard. “When I played with Albert Costa, Alex Corretja, Carlos Moya and with Sergi Bruguera, who was my idol and then my captain, but I didn’t at the time. Them playing and competing was so far away, and I liked what they did. In my best memories of when I was young, from when I was seven or eight when I started to play to when I turned pro at 20, I didn’t think about if I would become what I have.” 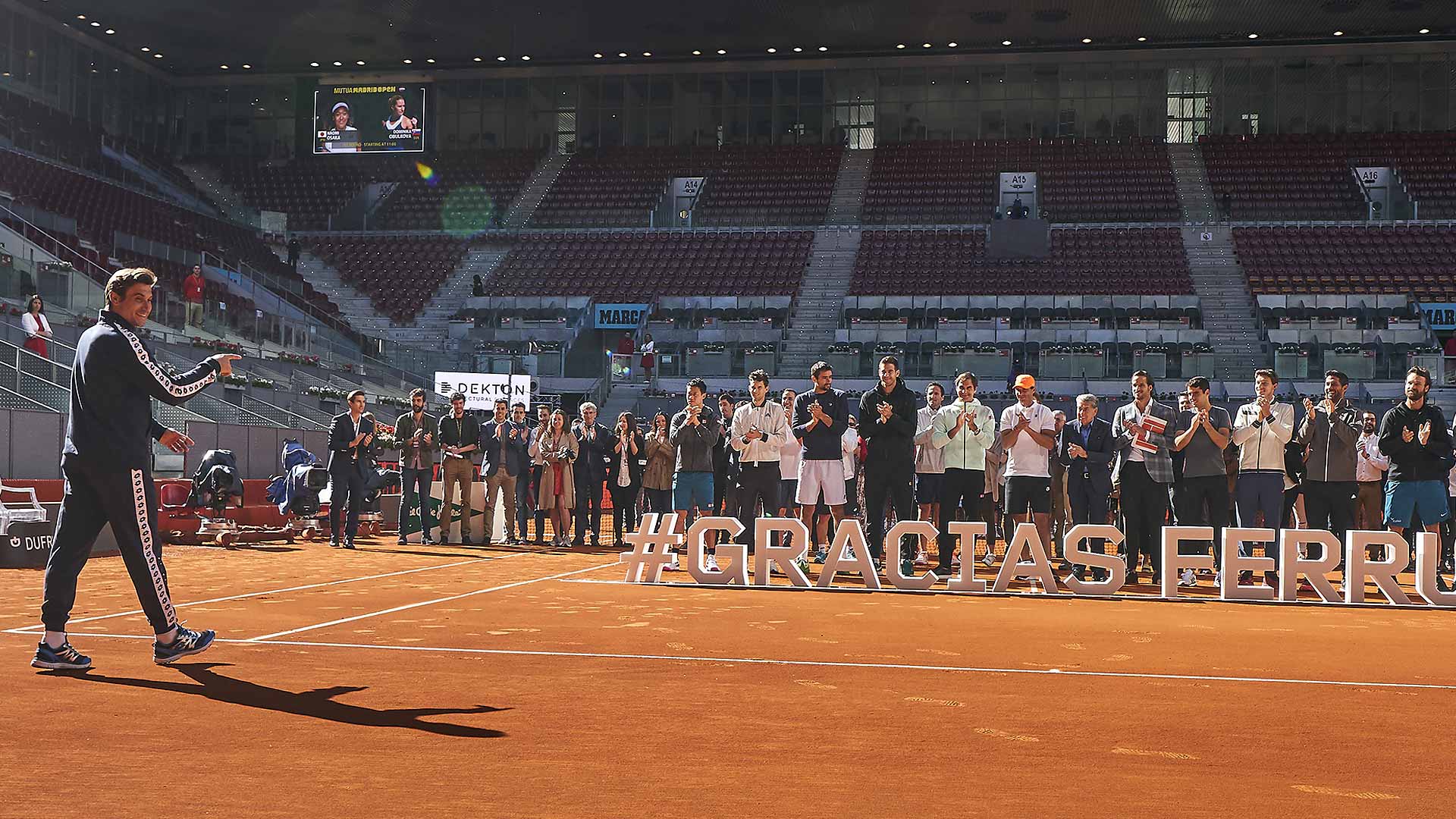 It all started on that frontón court, before playing any of the 1,110 matches he has racked up in his career. “I was very lucky with my parents,” he notes on the lack of pressure on his first steps as a tennis player. “I’m not just saying that because it’s them, but I’ve always had great respect and regard for this sport. They gave me values in life for which I will be eternally grateful. My father has always set an example. He always insisted that the important thing is not to win or lose, but to do whatever you can, try your best and enjoy playing.”

And that is the philosophy that he has always demonstrated on court. Fighting for every ball as if it were the last. “It’s the least you can ask of a tennis player,” insists the Alicante native before continuing to explain his progression in the early years of his career. “You have to be clear that it’s only a sport. You have to understand that defeat hurts... But my parents did a good job and I never felt pressured. The environment of managers came much later for me. When I was 19 or 20 years old and I won my first ATP tournament was when I had my first manager, Carlos Costa.”

You May Also Like: Ferrer: "In The End, All You Have Left Is The Person"

Ferrer won his first match in July 2002 in Umag against David Nalbandian. At 20 years of age, he surprised the tennis world by reaching his first final at the same tournament (l. to Moya). Just a few weeks later he lifted another ATP Challenger Tour title in Manerbio. And in August of that year he would don his first ATP Tour crown in Bucharest, where he beat Jose Acasuso.

“You can become a great player. In the end, this is sport,” he says regarding solid family support, which was so important in his career. “If a father puts pressure on his son or daughter, they can become a great champion. The problem is, who will help them when they stop playing tennis? That’s the difficult bit. I promise you that if I had to choose, I would prefer to be the person I am in my parents’ home to being No. 3 in the world. I think the education I have received has made me much more at ease with myself and allowed me to manage my retirement in a noble and happy way and with the affection of a large part of the world of tennis.”

His arrival at No. 3 in the ATP Rankings came in July 2013 during the most brilliant spell of his career. The previous year was his most prolific with seven titles (Auckland, Buenos Aires, Acapulco, ‘s-Hertogenbosch, Bastad, Valencia and the ATP Masters 1000 in Paris). In the following months he continued his success in Auckland and Buenos Aires, as well as reaching the finals at the Miami Open presented by Itau and at Roland Garros.

Ferrer went through a huge evolution. He channelled his strong temperament on court into hours of hard work to grow as a player. “It took me a while to learn to live with defeat — above all, when you’re young and you lose — but I understood it,” he says. “I understood that it is part of tennis and of life. And when you’re young you don’t have the mental maturity to accept that. Even up to 27 or 28 years of age it was win or lose. But you can’t just focus on that. Everyone loses much more than they win.

“That also forms part of your DNA, but you can learn it. It was difficult for me. I had days when I wouldn’t speak, I found it hard to sleep… I still find it hard, but now I sleep better. I’m grateful for that. The following day I would recover. In that regard, I feel proud of how I’ve managed my days. Not enjoying certain moments in tennis because of that extra pressure the next day, that’s the only thing I found hard to understand. Losing and not forgetting, or understanding that there are moments when you can’t play as well.” adds the Spaniard, who got used to winning when he consolidated his place among the Top 10 in 2010 and then stayed among the tour’s elite for seven years.

His achievements on court speak for themselves. His 734 match wins, 12th on the all-time list, and 27 titles, third on the list of Spanish players in the Open Era behind only Manuel Orantes and Rafael Nadal, are a mere demonstration of the magnitude of his legacy. And those closest to the man from Alicante insist that he is even greater without a racquet in his hand. Farewell, David!