Andy Murray and Milos Raonic - who met in the final at The Queen's Club and Wimbledon this year - will resume their London rivalry today when they play in the semi-finals of the Barclays ATP World Tour Finals.

In New York City in the 1980s - a time and a place captured by the fictional Gordon Gekko's declaration that "greed is good" - no one lived a life of excess quite like Ivan Lendl did.

Nine years in succession, Lendl reached the final of this tournament, during an age when it was played in the city's Madison Square Garden. From those appearances, Lendl took five titles. And now Lendl could be involved in a 10th title-match at the season finale, though this time he would be sitting in a coach's chair near the court rather than bashing forehands from the baseline. You can imagine that Lendl would take great pleasure from watching Murray progress into what would be his first title-match at the Barclays ATP World Tour Finals, after semi-final defeats in 2008, 2010 and 2012. Especially as it would bring Lendl another victory, of sorts, over his nemesis John McEnroe, who has been offering some advice to Raonic during this tournament.

Twice already this year - at The Queen's Club and Wimbledon - Murray has beaten Raonic in London. Or, to put it another way, twice already this season, Lendl has got the better of McEnroe, who also did some consulting work for Raonic during the grass-court swing.

Victory today would extend Murray's winning streak to 23 matches, which would be the longest run of his career. But note how it was Raonic's withdrawal from a semi-final in Paris - because of injury - that propelled Murray to No. 1 for the first time. Two weeks later, will it Raonic - who on his first semi-final appearance will be looking to clobber Murray with his mighty serve - who takes that ranking away?

Novak Djokovic's attempt to win the Barclays ATP World Tour Finals for a fifth successive year - and for a record-equalling sixth time overall - continues today when he plays Kei Nishikori in the semi-finals.

Coups don't happen that often at the season finale. You have to rewind 15 years or more than half Djokovic's lifetime - for the last occasion that the No. 1 Emirates ATP Ranking switched around at the last tournament of the year. That was back when Australia's Lleyton Hewitt elbowed Brazil's Gustavo Kuerten off the summit in 2001 in Sydney.

But, just a fortnight after being dislodged by Andy Murray, Djokovic could possibly be in the ascendancy again. That could happen today, if Djokovic were to beat Nishikori and Murray were to lose to Milos Raonic. Or it could take place tomorrow, if Djokovic were to beat the Japanese today and then tomorrow defeat Murray in what would be the first occasion in history that the year-end No. 1 ranking would be on the line at the title-match of the season finale.

Regaining that top position would move Djokovic ever higher up the list of tennis grandees - he is hoping to finish a third successive season as the year-end No. 1, but even more significantly it would be his fifth time overall. That would put him level with Roger Federer and Jimmy Connors, and then only Pete Sampras, who finished six consecutive seasons as the No. 1, would be ahead. So history could flow from Djokovic's racquet this weekend. Can he become the first man to win five consecutive titles at this tournament? And can the Serbian, who was the champion in Shanghai in 2008, match Federer's record of six titles?

The only other occasion that Nishikori reached the semi-finals at The O2, in 2014, he ran into Djokovic, which meant he ran no further. And this time, it would appear, Djokovic is as motivated as ever to win the Barclays ATP World Tour Finals.

The semi-finals of the Barclays ATP World Tour Finals on Saturday are headlined by the Top 2 players in the Emirates ATP Rankings, Andy Murray and Novak Djokovic. They are joined by No. 4 Milos Raonic, who is making his first semi-final appearance, and No. 5 Kei Nishikori, who is appearing in his second semi-final in three years.

The exciting finish to year-end No. 1 in the Emirates ATP Rankings between Murray and Djokovic would be determined in Sunday’s final if both players win their semi-final matches. With Murray losing 275 points on Nov. 28 from the 2015 Davis Cup final, Murray has 11,510 points on the season to Djokovic’s 11,380 points. Djokovic must finish a round ahead of Murray in order to overtake the Briton, who is trying to become the 17th player in the history of the Emirates ATP Rankings (since 1973) to finish No. 1. Djokovic is attempting to finish No. 1 for the third straight year and fifth time in six years. The year-end No. 1 ranking has never come down to the top two players in the championship match of the ATP Finals. Ranking points were first awarded in the ATP Finals in 1990.

In the first singles match, Murray enters with an 8-3 FedEx ATP Head 2 Head record against Raonic, who has lost the past seven meetings against the Briton, including five this season. They last met in the semi-finals at ATP Masters 1000 Cincinnati on Aug. 20 with Murray winning 63 63, which was also his 22nd straight match victory. This will be their third meeting on British soil in 2016 with Murray winning 67 64 63 in the final at the Queen’s Club in London on June 19 and in the Wimbledon final (64 76 76) on July 10. Murray won their previous indoor meeting 63 75 here at The O2 in round robin play two years ago. Prior to that, the Canadian won three of the first four meetings. Murray comes in with a 22-match winning streak and this is the first time since his season finale debut in 2008 Shanghai he is into the semi-finals with a 3-0 round robin record. Murray also reached the semi-finals at The O2 in 2010 and 2012. Murray is trying to reach his fifth straight final and ATP World Tour-best 13th of the season. He is 8-4 in finals and since May he has compiled a 63-5 record, reaching 11 finals in 12 tournaments (eight titles). Raonic is the first Canadian to reach the singles semi-finals in ATP Finals history (since 1970) and he is trying to post his first career win over a World No. 1 (0-6). Raonic opened the season by capturing his eighth career ATP World Tour title in Brisbane (d. Federer). The 25-year-old Canadian is 1-3 in finals and besides his Queen’s and Wimbledon runner-up showings, he also advanced to the final at ATP Masters 1000 Indian Wells (l. to Djokovic). Raonic leads the race to finish No. 3 in the Emirates ATP Rankings with 5,450 points. He or No. 5 Nishikori (4,905) will finish No. 3 for the first time. Stan Wawrinka has 5,315 points and is No. 4 at the moment.

In the evening session, Djokovic brings a 10-2 FedEx ATP Head 2 Head record against Nishikori, who has lost the past nine meetings, including five this season. Their last meeting came in the final of ATP Masters 1000 Toronto on July 31 with the Serb winning 63 75. That was also Djokovic’s seventh and last title of the season. This is the third straight year they are meeting at The O2. Two years ago Djokovic won 61 36 60 in the semi-finals and last year 61 61 in round robin play. Djokovic has won 21 of his past 22 matches at The O2 since 2012 with his only loss coming to Federer last year in the second round robin match. This is his fifth straight semi-final and seventh overall (5-1) at the ATP Finals. He is trying to win his fifth straight title at The O2 and sixth overall (2008). Nishikori is appearing in his 10th semi-final (5-4) of the season and he is 1-4 in finals with his lone title coming in Memphis in February (d. Fritz). He is trying to become the first Asian-born player to reach the final in tournament history (since 1970). Coach Michael Chang was runner-up in 1995 (l. to Becker). 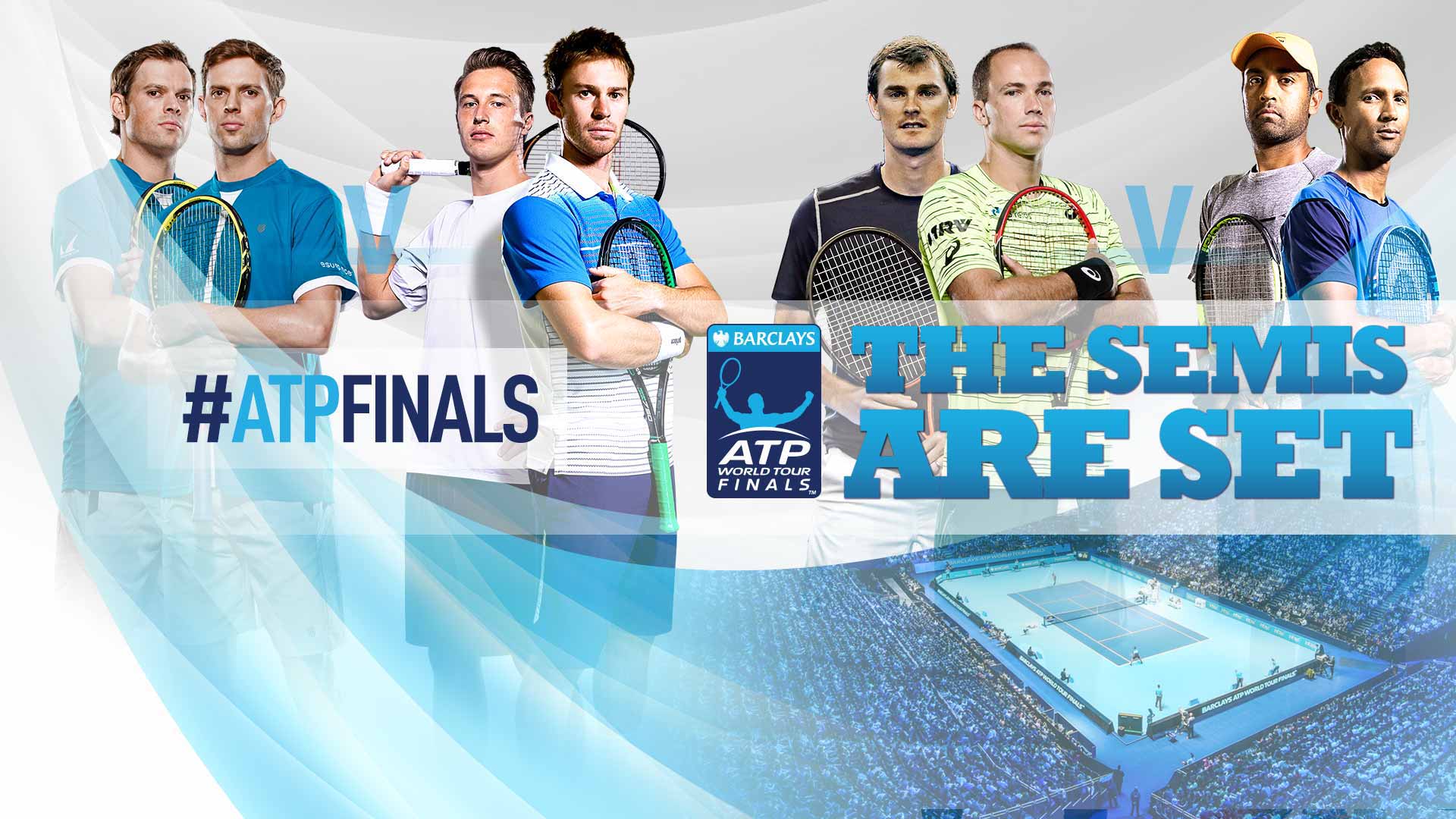 The doubles semi-finals feature three first-time teams along with four-time champions, No. 3 seeds Bob and Mike Bryan. The first-time duos are No. 2 Jamie Murray and Bruno Soares, No. 5 Henri Kontinen and John Peers and No. 7 Raven Klaasen and Rajeev Ram.  Murray and Soares have surpassed Frenchmen Pierre-Hugues Herbert and Nicolas Mahut, who came into London with a 575-point lead. Murray and Soares will finish No. 1 in the Emirates ATP Doubles Team Rankings. If Soares goes on to win the season finale crown with Murray on Sunday, the 34-year-old Brazilian will become the 50th player (since 1976) to rise to the individual No. 1 in the Emirates ATP Doubles Rankings, when the new standings are published on Monday. If not, then Mahut will finish No. 1.

In the first match of the day, Kontinen and Peers, who won the Group Fleming/McEnroe with a 3-0 record, take on the Bryans for the second straight tournament. Kontinen and Peers won the previous meeting 64 62 in the quarter-finals at ATP Masters 1000 Paris en route to their biggest career title. They come in with an eight-match winning streak and they have beaten all 7 other Barclays ATP World Tour Finals teams in 2016. The Bryans are appearing in their fourth straight season finale semi-final and 11th overall SF in 14 attempts. They have the most doubles match wins (37) in tournament history and they are trying to advance to their seventh final (4-2). They won titles in 2003-04, 2009 and 2014. They were finalists in 2008 and 2013. Kontinen is the first player from Finland to qualify for the ATP Finals and Peers is the first Aussie to reach the semi-finals since Paul Hanley (w/Ullyett) in 2007 (l. to Knowles/Nestor). The last Aussie(s) to reach the final/win the title was Todd Woodbridge and Mark Woodforde in 1996 (d. Lareau/O’Brien).

In the other semi-final, Group Edberg/Jarryd winners Murray and Soares bring a 2-1 head-to-head record against Klaasen and Ram. In each of the previous three matches this year, the team that lost the first set came back to win. Murray/Soares won in the quarter-finals at the Australian Open and at ATP Masters 1000 Toronto while Klaasen/Ram prevailed in the 1R at ATP Masters 1000 Miami.