As Fires Raged, Challenger Stars Fought On In Northern California

Jonathon Braden
This article contains:
Players, officials describe a week unlike any other at the Fairfield Challenger

Phil Cello has been running tennis tournaments, including ATP Challenger Tour events, for the past 35 years. But Cello and his army of workers and volunteers have never had an experience like last week's NorthBay Healthcare Men's Pro Championship, where the on-court action at the $100,000 ATP Challenger tournament was secondary to fans, players and officials.

The host site, Solano Community College, was just miles from wildfires that were ravaging Northern California, forcing thousands to evacuate their homes and devastating communities across the region. Signs of the ongoing destruction were omnipresent at the tournament.

Every day, on their way to the courts, players walked by the college's cafeteria, which had been turned into an evacuation center for affected families. Instead of 18 and 19 year olds exhausting their meal plans, the cafeteria featured rows of cots and tables of food for individuals who had been forced from their homes.

You May Also Like: Challenger Q&A: McDonald Reflects On First Challenger Title In Fairfield

Outside, organisers handed out gas masks throughout the week as air quality worsened because of nearby billowing smoke. Officials stopped play altogether on Wednesday, after only three of 10 scheduled matches had been contested, because of deteroriating air quality, said Keith Crossland, the tournament's ATP Challenger Tour supervisor.

Some players watching Wednesday's early matches donned gas masks but none of the on-court competitors did, Crossland said. Felix Auger-Aliassime played in one of those matches, falling to Serbia's Nikola Milojevic 6-2, 6-4. That same day, the 17-year-old Canadian withdrew from doubles, citing "respiratory illness", Crossland said.

A handful of players had to evacuate the homes they were living in and, with help from tournament officials, find new temporary homes while they played in the tournament.

The tournament, itself, almost had to be relocated as well. On Wednesday, the fires were within a valley of reaching the college, Cello said. A powerful gust of wind would have forced an evacuation of the campus, which had already been shut down, save for the skeleton crew running the evacuation center.

“Had we had a little more wind and just at the wrong moment, we might have had to abandon the tournament,” said Cello, who had made contingency plans for the tournament to be moved to the University of California, Davis, about 30 miles from Fairfield. “We dodged a very big bullet.”

Ultimately, the tournament stayed at the community college, and players and officials attempted to provide a distraction for the families whose lives had been interrupted by the flames. Players were also reminded of what really matters during such dire weeks.

Aussie Sam Groth on his #MyTennisLife Tennis Channel blog wrote: “The week in Fairfield was not really as much about the tennis as it was with the bushfires that have been wreaking havoc in the Nap area (sic). Several players had to be evacuated from their housing and the evacuation center was right next to the tennis courts. It really puts in to perspective what playing tennis means, when you have people who have fled their homes, not knowing if they will be there when they return.”

Cello was impressed by Groth and the other players. Not once did he hear an athlete groan about having to change homes or about playing in such conditions.

“That was a real positive thing to come from this,” said Cello, who had to evacuate his own home at 2 a.m. Tuesday and didn't return until Saturday evening. “I never really heard a player say, 'This is crazy. We shouldn't be playing'. They were all really nice.”

The players were aware that thousands were having it much worse in California. To date, the fires have killed at least 41 people and destroyed more than 5,700 structures and 200,000 acres. “It's the biggest and most deadliest wildfire in California history,” Cello said. 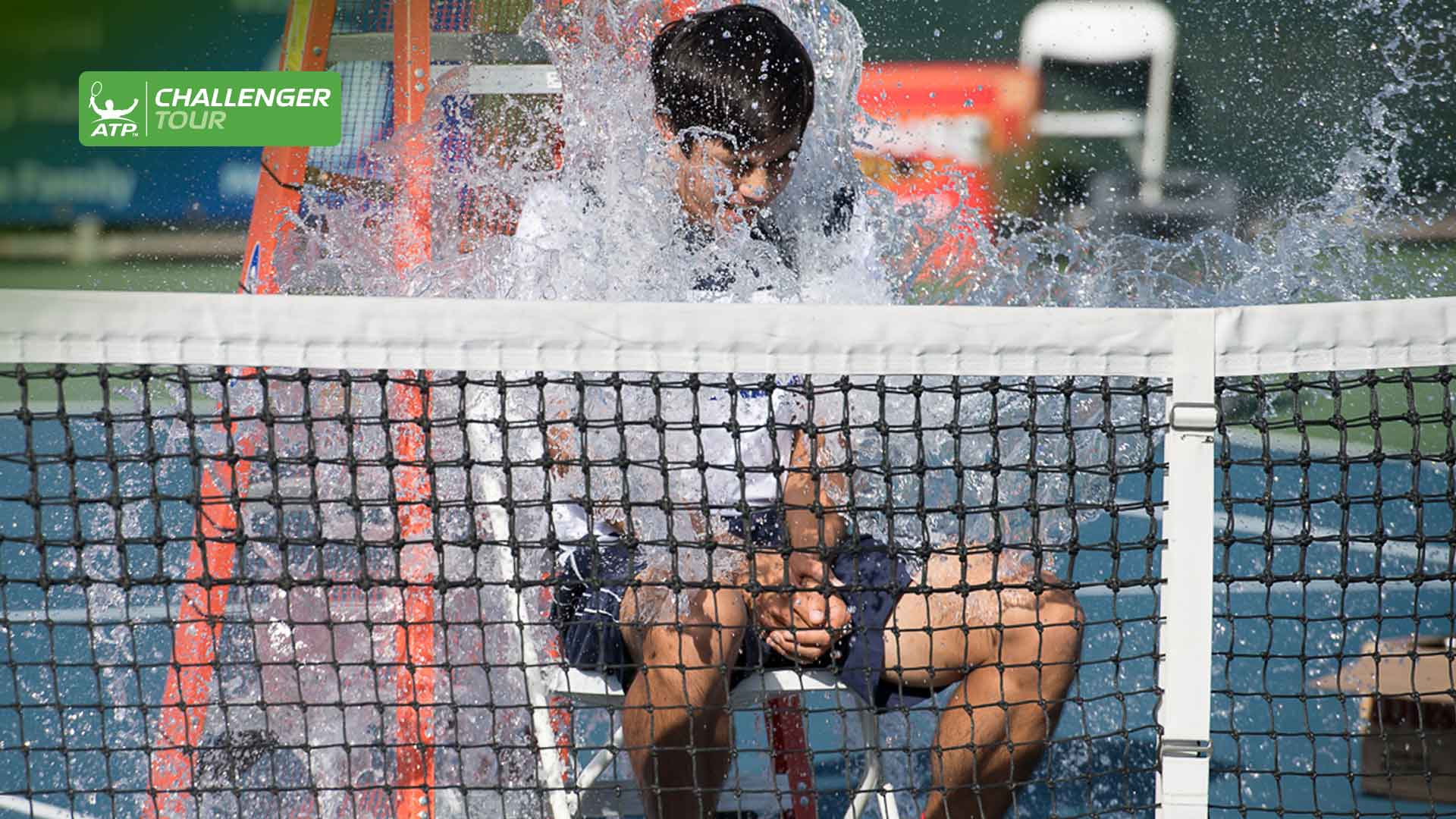 On Sunday, the tournament finished on time and under blue skies. It was a fitting final for "The Golden State", as California natives Mackenzie McDonald and Bradley Klahn played for the crown. McDonald prevailed 6-4, 6-2 for his first ATP Challenger Tour title. After the final, they made time to help fire victims.

Both McDonald and Klahn were dunked in water. The players will now promote their “Splash for Sports” videos on their social media channels to help raise money for a wildfire relief fund.

“I just really appreciated the fact that both of those guys were willing to help,” Cello said.