David Goffin reached a career-high No. 7 in the FedEx ATP Rankings on 20 November 2017.

David Goffin is the No. 10 player in the FedEx ATP Rankings with four ATP Tour titles to his name.

ATPTour.com looks at five things you should know about the 29-year-old.

1) He Played His Idol On His Roland Garros Debut
In 2012, as a lucky loser, Goffin survived two five-set matches en route to the Round of 16 at Roland Garros. The 21-year-old faced his idol, Roger Federer, for a place in the quarter-finals.

After taking the opener, Goffin pushed Federer in the second set before falling to a four-set defeat. Following the match, Goffin and Federer shared a joint interview on Court Suzanne-Lenglen. 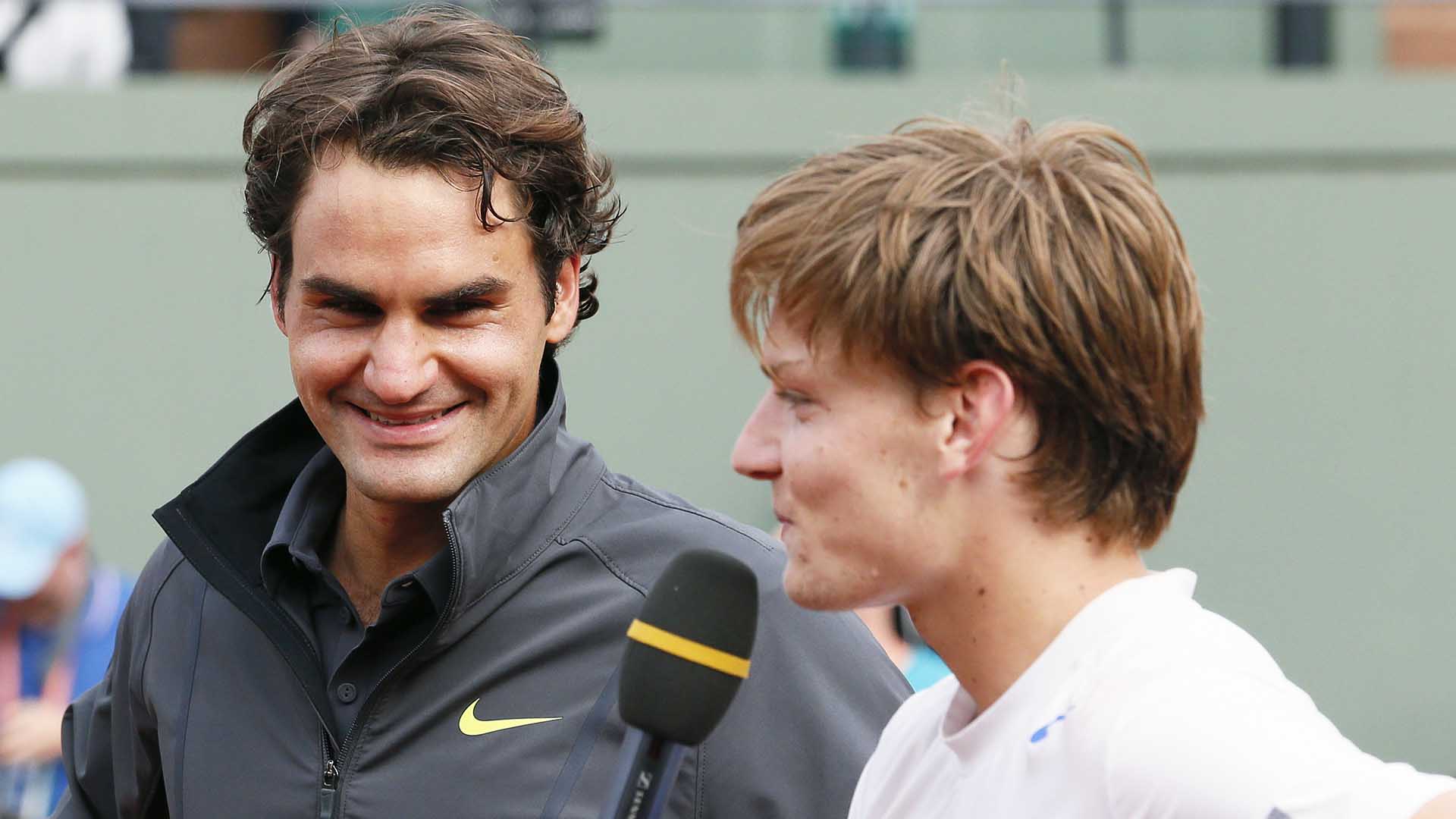 2) He Returned In Style In 2014
After breaking his left wrist in September 2013, Goffin reached new heights the following year. The Belgian arrived at the 2014 Generali Open on a 15-match and 30-set winning streak, after capturing ATP Challenger Tour titles in Scheveningen, Poznan and Tampere.

Searching for his first ATP Tour trophy, the 23-year-old cruised through to the semi-finals in Kitzbühel without dropping a set, before earning three-set comeback wins against Maximo Gonzalez and Dominic Thiem to take the title. At the 2014 Nitto ATP Finals, the Rocourt native received the 2014 Comeback Player of the Year trophy.

3) He Ended 2017 In Top Form
At the 2017 Nitto ATP Finals, Goffin earned three Top 4 victories en route to the championship match. The 26-year-old overcame Rafael Nadal and Dominic Thiem to advance to the semi-finals, where he rallied from a set down to upset six-time champion Roger Federer.

Goffin met World No. 6 Grigor Dimitrov in the final, but fell in three sets to the Bulgarian. With titles in Tokyo and Shenzhen, Goffin ended the year with a 59-24 record.

4) 2019 Was A Year Of Two Halves
“Last year was a lot of ups and downs for me. At the beginning of the year, it was really tough. I was a little bit lost,” said Goffin.

In his opening 15 tournaments of the 2019 ATP Tour season, Goffin earned just two Top 30 victories and failed to win more than two matches at any event. But the Belgian reversed his fortunes at the NOVENTI OPEN in Halle, beating three Top 30 players in four matches to earn his place in the championship match.

Despite his loss to Federer in the final, Goffin continued to build in confidence through the remainder of the year. After a quarter-final run at Wimbledon, the four-time ATP Tour titlist reached his first ATP Masters 1000 final at the Western & Southern Open and advanced to the Rakuten Japan Open Tennis Championships semi-finals in Tokyo.

“I changed coaches. I started to work with Thomas Johansson and then week-after-week, I started to play much better,” said Goffin. “The second half was much better. I finished the year No. 11 [in the FedEx ATP Rankings] so, at the end, it was a good year.”

5) He Entered The History Books At The 2020 ATP Cup
Remember this for future quiz nights: David Goffin was the first player to use Video Review in ATP Cup history.

In his opening match of the 2020 ATP Tour season, the 5’11” right-hander unsuccessfully challenged a foot fault call during his match against Radu Albot. Goffin went on to clinch the tie for Team Belgium with a 6-4, 6-1 victory and ended the team competition with a 3-1 record.

In the Final Eight, Goffin became only the second man to beat Nadal in singles while playing for Spain (excluding Olympics). Nadal had won 32 straight such contests heading into the match (32-2).