Fabio Fognini rallied from two sets down to beat Gael Monfils in the second round at 2010 Roland Garros.

A (Very) Late Night To Remember: Fognini vs. Monfils

Editor's Note: But for the COVID-19 pandemic, Roland Garros would now be underway. During the next two weeks ATPTour.com will look back on memorable matches and happenings at the clay-court Grand Slam, which tournament organisers are now hoping to stage in September.

Classic matches are remembered for various reasons, from the players involved to the stakes. Fabio Fognini and Gael Monfils’ match in the second round of 2010 Roland Garros, however, will be remembered for darkness.

Monfils, who was only 23 at the time, had already made two quarter-finals at the clay-court Grand Slam. Fognini, however, entered the tournament without a main draw win at Roland Garros. The Frenchman was a two-time ATP Tour titlist, and the Italian hadn’t made a tour-level final.

So when 13th seed Monfils sprinted to a two-set lead against World No. 92 Fognini, it was not a surprise. The rest of the match, however, was.

Fognini had lost eight of nine matches entering the event. Facing a home favourite who’d enjoyed success at the tournament in the previous two years was tough enough. Coming back from down two sets would be even more difficult.

But Fognini showed an early sign of his love for the big moments on Court Philippe Chatrier, hanging in there with the athletic Frenchman. As day turned to night on the event’s biggest court, the match’s momentum switched from Monfils’ racquet to Fognini’s.

The Italian showed some of the shotmaking prowess that today has him at No. 11 in the FedEx ATP Rankings. It was clear Monfils was not physically at his best as the match went deep into the decider. The Frenchman is capable of crushing his first serve, but as dusk fell over the Parisian crowd, he was simply rolling the ball in — perhaps even slower than he normally would hit a second serve — and daring Fognini to take the match from him. 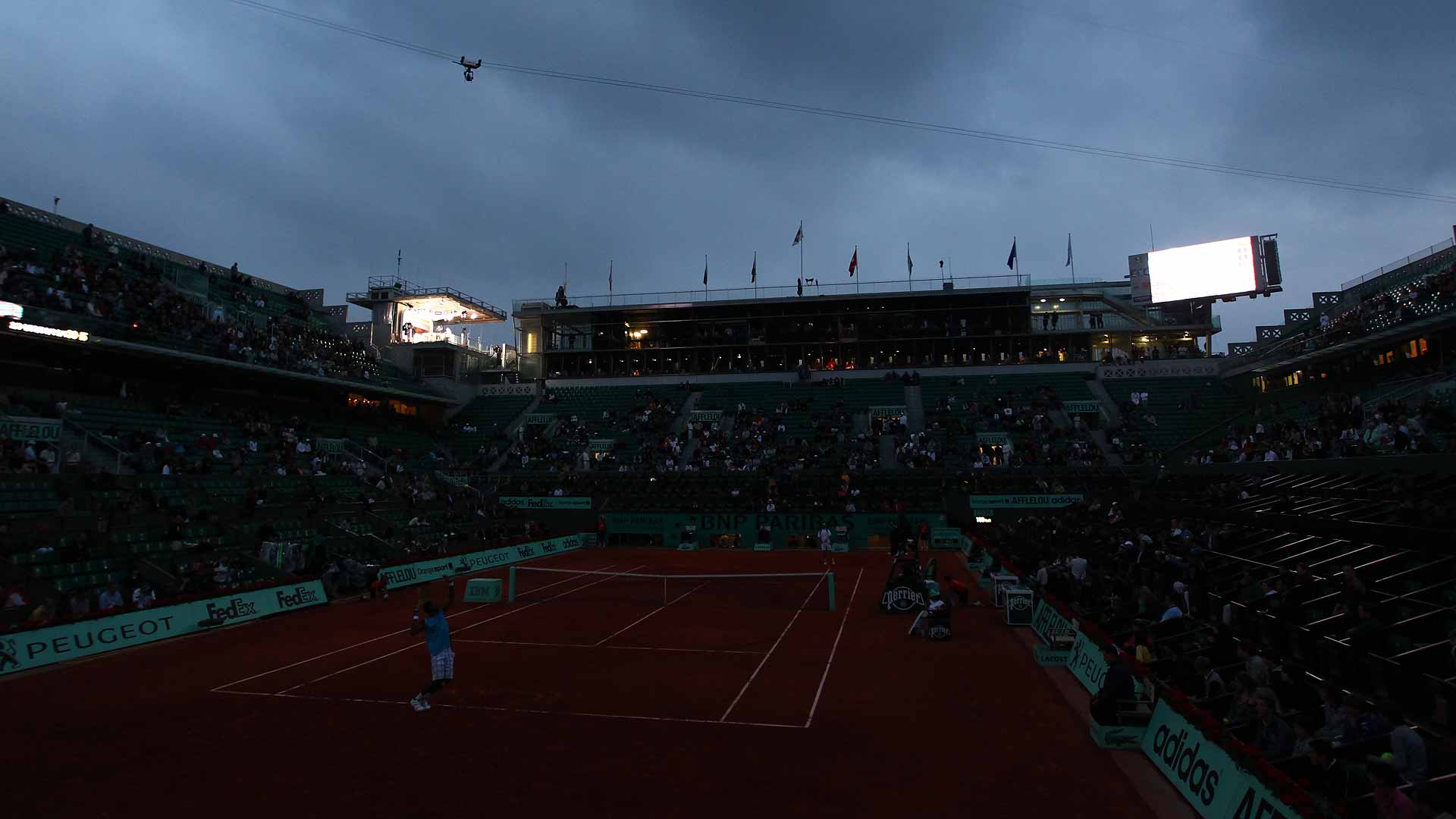 That was when things got wonky. At 4-4 in the fifth set, there were discussions about suspending play due to darkness, as it was increasingly difficult to see. Only the stadium’s scoreboard and a television studio lit the court.

But the players continued for two more games. Fognini held for 5-4, and then a hobbling Monfils served to stay in the match. At 15/40, Fognini let slip his first match point by missing a backhand into the net. On the next point, he had a great look to attack a slow second serve, but he just put the ball back in play, and eventually missed a forehand squash shot into the net. Two points later, Fognini had a third chance to seal his victory, but he missed a forehand return long. The darkness only got more noticeable on television, which made the setting look brighter than it actually was.

With the partisan crowd that remained in the stands fully behind Monfils, the Frenchman somehow survived to fight another day, holding for 5-5 as cheers erupted from the crowd. Fognini had a golden opportunity to close out a higher-ranked opponent, but just before 10 p.m. local time, they walked off the court.

"Look at the score,” Fognini said, according to Reuters. “It's an incredible match."

After all the effort it took to push the match to a second day, it was a big disappointment for Monfils, who was the second-ranked Frenchman in the field. But he was honest about who the better player was.

"He beat me fair and square."