Fabio Fognini delighted the home fans at the Internazionali BNL d'Italia on Monday with a straight-sets victory over Dominic Thiem at the ATP Masters 1000 event in Rome. Watch live &amp; on demand at <strong><a rel="noopener noreferrer" href="http://www.tennistv.com" target="_blank">TennisTV.com</a></strong>.

Dominic Thiem produced some of his best tennis since his return to the ATP Tour from injury, but it was not enough to overcome home favourite Fabio Fognini at the Internazionali BNL d'Italia on Monday.

Fognini delighted the Rome Center Court crowd by gutting out a 6-4, 7-6(5) win over the Austrian, who was seeking his first victory since reaching the third round at the same event one year ago. The Italian improves to 2-3 in his ATP Head2Head against Thiem, and earns his first win in the Italian capital since 2019.

"Of course I'm happy because I won," Fognini said after his 398th career tour-level victory. "It's never easy playing against a great champion. Happy to be here and another chance to play in this great atmosphere."

The World No. 57 served for the win and held a match point at 5-4 in the second before Thiem broke for the first time on his seventh break point of the evening. Finding more purchase off both wings and firing a fearless forehand return winner to stave off that match point, the Austrian continued his momentum with a love hold before Fognini did the same to force a tie-break.

After dropping the first point of the tie-break, Fognini never trailed again — though he twice lost a mini-break advantage before holding his nerve from 5/5. He moves forward in his bid to better his career-best run to the 2018 quarter-finals at the venue.

"It's always difficult, especially because now I'm 35," said Fognini, who will reach that age on 24 May. "Physically, I'm quite OK. I feel good when I run. Of course I need to do some things on my game, try to push the ball harder because conditions are really slow. But these kinds of conditions are tough for everybody." 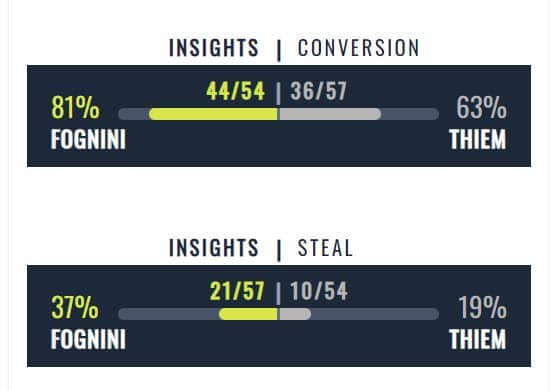 An all-Italian second-round showdown could now be on the cards if 10th seed Jannik Sinner can beat Pedro Martinez on Tuesday.

"For sure he's our future star that on the ATP Tour. Let's see how he plays tomorrow," Fognini said. "My first goal is to try to recover well because of course I need it now."

Thiem drops to 0-4 on the ATP Tour in his return from a right-wrist injury which kept him out of action for nine months.

"I'm really frustrated right now, obviously," he said post-match. "Things have improved again since Madrid. That's good. I looked at the stats after the first set on the big screen. Actually they are getting better and better. The first-serve percentage, first-serve wins, second-serve wins actually had better stats in the first set. Just zero out of three break points. I have to play better those close points.

"That's what I did at 4-5 in the second when I came back. Then at 6-5 he played a great game with four first serves. I was hoping to break him there and get things going even better for me.