Taylor Fritz picked up his first win over Dominic Thiem at Laver Cup.

Team World is one match away from taking the Laver Cup after a pair of big wins on Sunday in Geneva. Taylor Fritz outlasted Dominic Thiem 7-5, 6-7(3), 10-5 and John Isner/Jack Sock rallied to defeat Roger Federer/Stefanos Tsitsipas 5-7, 6-4, 10-8, giving Team World an 11-7 lead over Team Europe.

“That was a big match for Team World. We really needed that win. To let my team down the first day and contribute to the team today and give them the win means so much to me,” Fritz said in his on-court interview. “This has to be one of the biggest wins of my career. You’re usually just playing for yourself, but it means so much when you’re playing for other people.”

The singles match was scheduled to be Rafael Nadal against Nick Kyrgios, but Nadal pulled out due to a wrist injury and Kyrgios withdrew due to a shoulder injury. Federer was also scheduled to team up with Nadal in doubles, but Tsitsipas stepped in at the last minute. Team World must now win both of the remaining singles matches on Sunday's schedule to retain the Laver Cup. Federer takes on Isner and Alexander Zverev faces Milos Raonic.

You May Also Like: Read & Watch: Federer Uses Nadal Coaching To Defeat Kyrgios At Laver Cup

Fritz and Thiem traded comfortable holds throughout the first set, but a titanic game with Thiem serving at 5-6 saw Fritz convert on his fifth set point to grab the early advantage. There were no service breaks in the second set, but Federer and Nadal urged Thiem to play with more aggression and assert himself in the rallies.

“Find the right rhythm on your second serve,” Federer said. "Look for the baseline a little bit sooner in the rally if you can.”

The strategy worked as Thiem found a new gear in the second-set tie-break. An overhead winner and forehand winner gave the Austrian a 4/1 lead and he fired a forehand winner to force a Match Tie-break.

Thiem kept his momentum by winning the first two points of the Match Tie-break, but Fritz saved his best tennis for when it mattered most. A barrage of forehand winners and aggressive approaches saw Fritz win eight of the next nine points. The American laced a forehand winner on his second match point and charged over to his team to celebrate prevailing after exactly two hours of play. 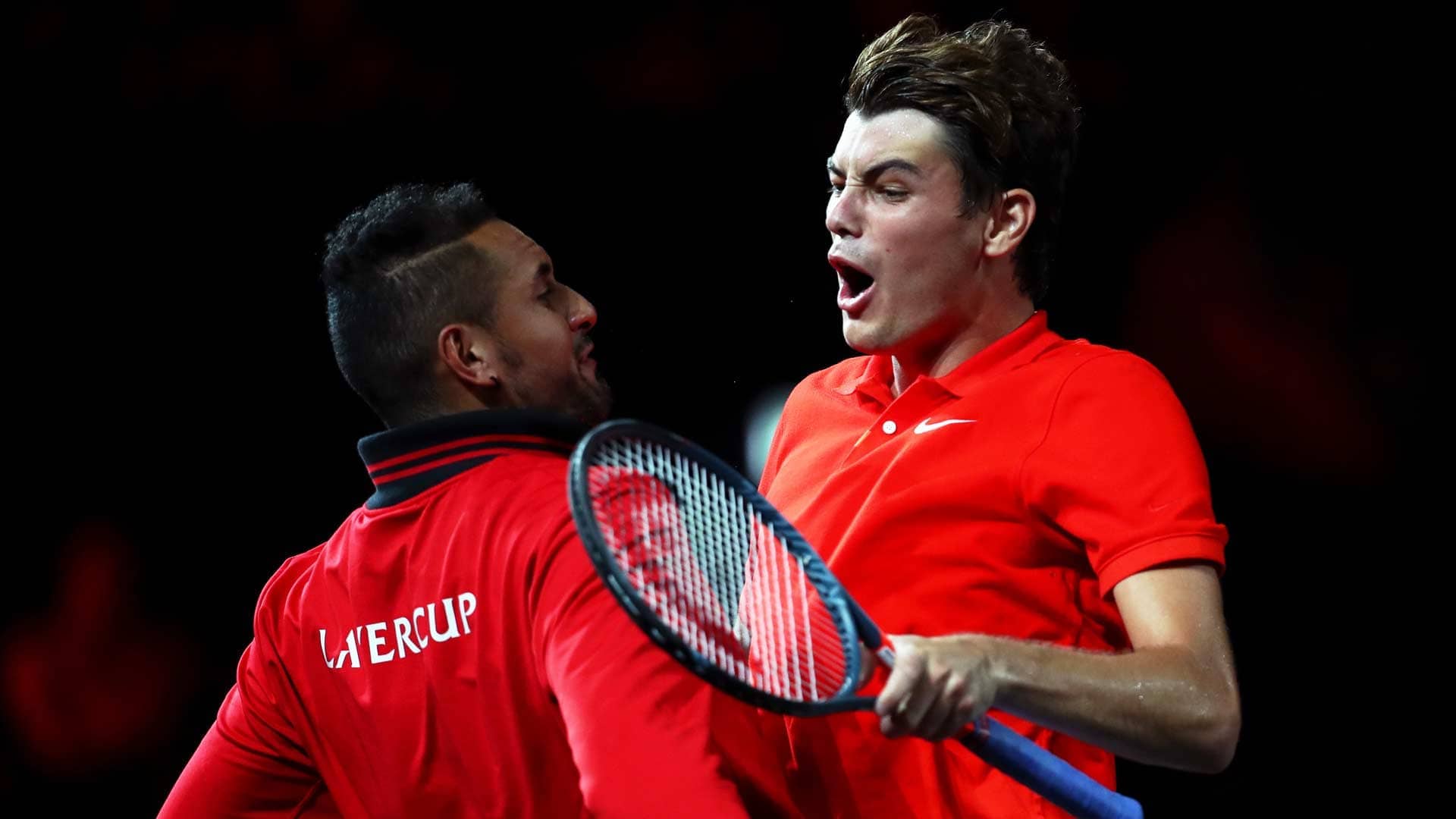 The match marked Fritz’s first win in Laver Cup play. Thiem suffered his first singles loss at this event and dropped to 2-1 Fritz also improved to 1-2 in his FedEx ATP Head2Head rivalry with Thiem. 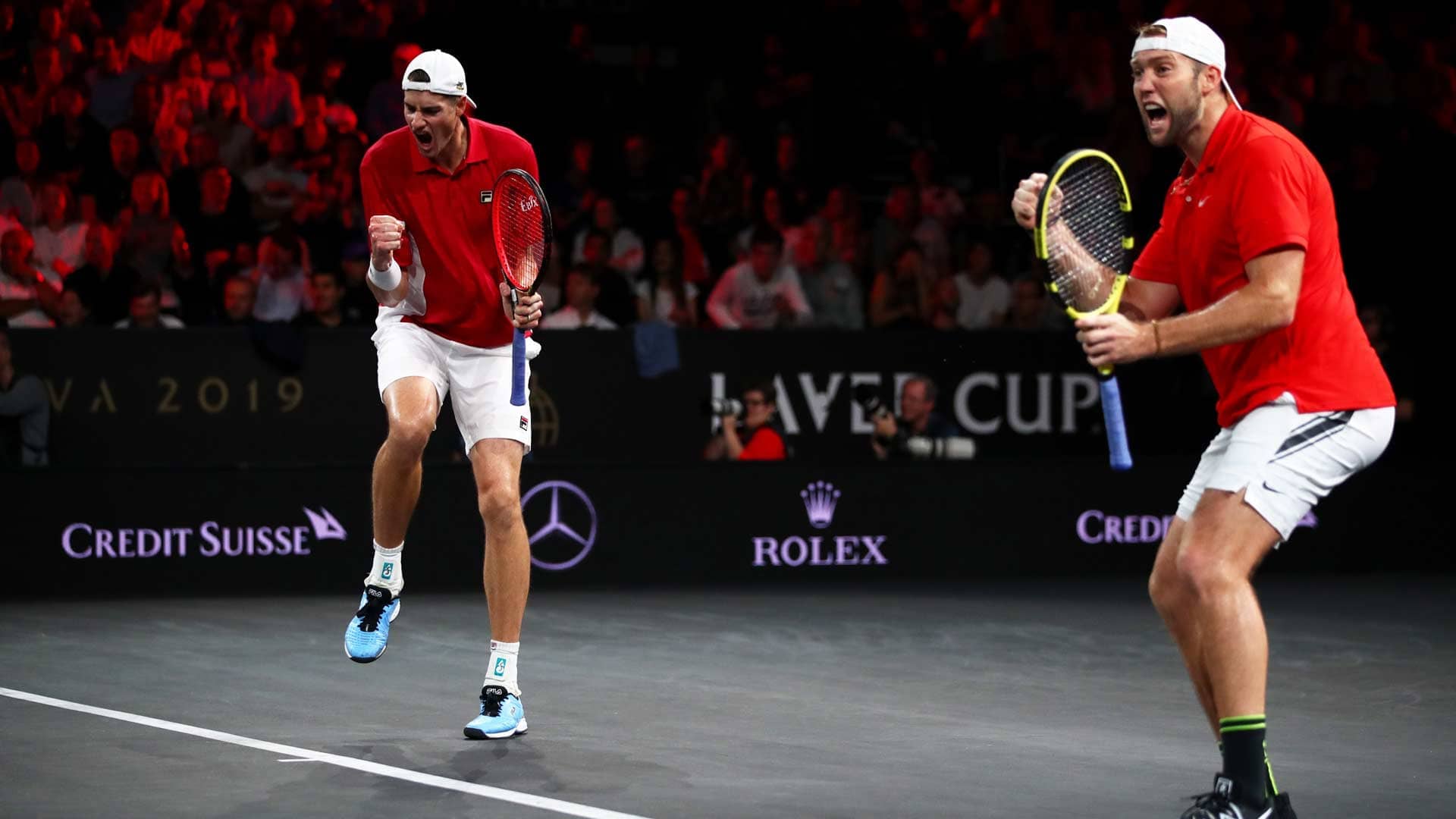 Federer and Tsitsipas quickly found their footing in their debut outing as a team, with the Swiss knocking off a volley winner on Sock’s serve at 6-5 to take the opening set. Isner/Sock regrouped and grabbed the lone break of the second at 1-1. Isner then fired an ace on Team World’s third set point to set up a Match Tie-break.

A backhand return from Isner at 4/4 gave the Americans a critical mini-break advantage and another strong serve from Isner wrapped up the win after one hour and 47 minutes.

Who wins the @LaverCup from here?pic.twitter.com/N7g1uhEfKy

"I like team atmospheres. I grew up playing sports," Sock said. "I love a loud crowd, whether they are European or for us."

Both Isner (2-0) and Sock (3-0) have gone undefeated this weekend. Isner is still unbeaten (3-0) in doubles at the Laver Cup, while Sock improved his doubles record to 7-2.