World No. 239 Hugo Gaston celebrates the biggest win of his career over 2015 champion Stan Wawrinka on Friday at Roland Garros.

Hugo Gaston matched the physical intensity, if not the consistent groundstroke power of Stan Wawrinka, on Friday to complete a memorable victory on Court Suzanne-Lenglen for a place in the Roland Garros fourth round.

The French wild card, appearing in just his second Grand Slam championship, was highly creative off both wings and fleet of foot in a 2-6, 6-3, 6-3, 4-6, 6-0 victory over 2015 champion and No. 16 seed Wawrinka in three hours and 10 minutes. The match had been suspended due to rain for two hours and 25 minutes at 2-2 in the third set.

"I tried to play my game, but I didn't know I could do it - until I won," said 5'8" Gaston, in an on-court interview with Cedric Pioline. "Every time I go on court I try to concentrate and play my game. I am grateful of the support I had and in two days' time I will play [Dominic] Thiem. I have nothing to lose."

World No. 239 Gaston, the last Frenchman in the main draw, is the lowest-ranked player in the Last 16 at Roland Garros since another French wild card, No. 283-ranked Arnaud Di Pasquale, in 2002. He will now challenge third seed Dominic Thiem, the US Open champion, who is riding a 10-match winning streak. 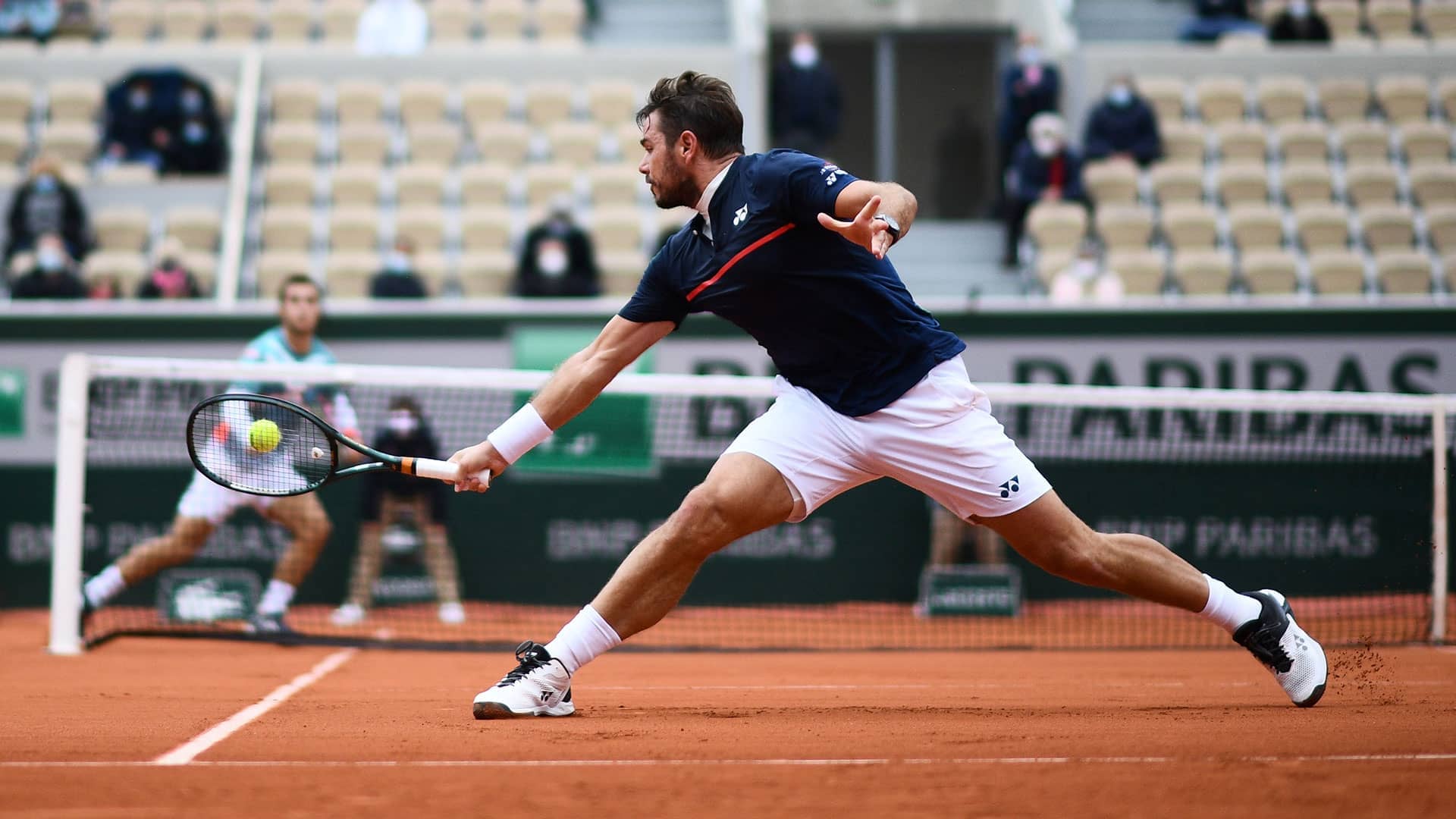 Wawrinka dominated the first set, smashing a mid-court winner to convert his fourth set point after 27 minutes of play, but once the Swiss let slip a 40/30 lead in the first game of the second set, Gaston grew in confidence.

As Wawrinka’s service consistency dipped, Gaston converted his advantage to take the second set after Wawrinka struck a backhand half volley into the net. Rain began to fall at 2:45pm local time, which resulted in a lengthy suspension of play at 2-2 in the third set.

After the resumption at 5:15pm local time, Gaston broke clear with a huge backhand winner down the line for a 4-2 lead and the 20-year-old clinched the third set when Wawrinka struck a backhand long — his 18th unforced error of the 45-minute set.

Wawrinka regrouped in the fourth set by taking a 3-0 lead, but Gaston worked his way back to 4-4 only to be broken in the 10th game when his Swiss opponent struck a backhand winner for the set. Gaston, undeterred, went from strength to strength in the one-sided decider.

Wawrinka, who beat Novak Djokovic in the 2015 final and was runner-up to Rafael Nadal in 2017, had never before lost to a player ranked as low as Gaston in the FedEx ATP Rankings at a major championship.

Gaston converted eight of his 21 break point opportunities to record the biggest victory of his career. Wawrinka struck 49 winners, but committed 74 unforced errors and is now 10-5 on the 2020 season.

You May Also Like: The Final Frenchman At Roland Garros: 20-Year-Old World No. 239 Hugo Gaston

Diego Schwartzman continued his impressive clay-court form when he defeated Slovakian Norbert Gombos 7-6(3), 6-3, 6-3 to reach the fourth round for just the second time. The 12th seeded Argentine, who upset Rafael Nadal en route to the Rome final two weeks ago, will next play Italian Lorenzo Sonego.

World No. 106 Gombos, appearing in the third round of a major for the first time, raced to a 5-2 lead with a double break in the opening set before Schwartzman stormed back to record his seventh victory in his past eight outings. Schwartzman, who has not dropped a set this week, converted seven of 17 break point opportunities and won 49 per cent of second-serve return points.